Most of the time, I’m pretty pleased with two boiled eggs and a slice of rye bread with butter. Aside from being a person of routine, I’m also tremendously money-conscious. So in a place like Copenhagen, where it costs nearly a month’s rent to have a buffet brunch, I don’t find myself in restaurants on a regular basis.

However! When it is your six month wedding anniversary and your husband’s what is known as a “foodie” AND you promised him a special dinner out for his birthday, which was already a month and a half ago, it is time for the following:

Print out a copy of the excel spreadsheet in which you maintain your monthly budget (you do this too, yes?)

Look at “food” section and see what is expendable. Hint: nothing will be expendable

Crumble up that spreadsheet and nothing-but-net it into the rubbish bin, seriously, you’re going out on the town, kids!

So once you’ve gone through the six stages of grief over the money you’re about to spend on a single night, it’s time to move forward. Make that reservation! Get on those high heels!

Amass opened in July of 2013. The head chef and owner, Matt Orlando, is a former NOMA chef de cuisine, with Per Se and the Fat Duck on his resume to boot. It’s housed in an abandoned warehouse in the middle of effing nowhere Christianshavn with an open plan kitchen and exposed wood beams. The waitstaff wear suspenders and dark- wash demin shirts. It, in effect, is cool. I’m not particularly cool, but I know it when I see it (cool to me is like pornography to the United States Supreme Court).

Getting a reservation at the moment can take up to a month. We’re lucky, though, because we happen to know a guy. So this awesome guy got us a table on a week’s notice and we were in! Nine o’clock on a Friday night (ugh, what are we, Spanish? I’m starving). 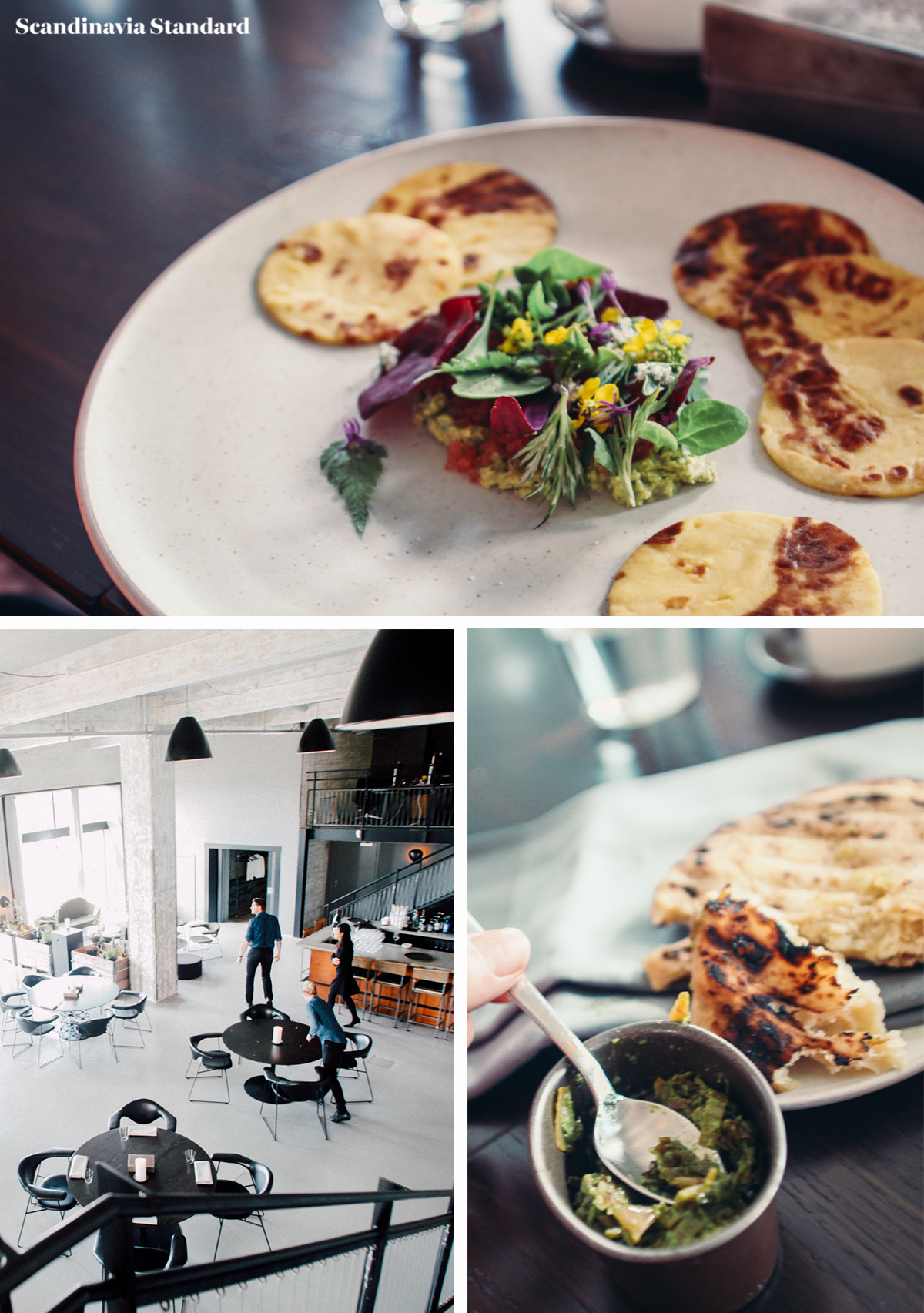 We arrived to low lights and a slightly hidden exterior. “Trust me,” my husband said, “there’s a restaurant in there.” Our effusive waiter led us to our seats and two glasses of sparkling Pinot Noir later, we were getting down to business. There are two possible menus: a tasting menu and the Simplicity menu. The Simplicity menu has 3 dishes, the entree being a large portion. The tasting menu is seven small courses. We chose the tasting menu, as recommended to us. Instead of doing the wine pairing, we bought a bottle of organic white. The wine was crisp with strong notes of melon- a great summer choice.

The view at Amass is deceptive. At first, you look through the sheer white curtains out onto a flat, nearly barren garden with just the hint of a city on the horizon; the peaked roofs of buildings and a steeple or two. Well that’s boring, you think.

Then the sun begins to set and the curtains are pulled back. The straight lines of washed-out sunset seem to envelop the whole world, and it is quietly beautiful. Patrons can ask for a break between the courses of their choice, take their drinks and go sit outside. The plates come out rather quickly, so I recommend taking a pause and enjoying the scenery before you run out of time.

The table itself was set exquisitely in a minimalist, monochrome style. The table itself was black and the settings white flecked with a light grey, evoking stones on a river. The wine and water glasses were of a fine glass, taking up almost no space. I particularly liked the use of green herbs as a centerpiece as well as a simple, lightly-distressed gunmetal box that contained our silverware.

The placeware and centerpieces were strikingly Nordic; high quality, simple pieces that added visually but also to the practice of eating.

The food was fun, flavorful and relatively simple. I’m not going to go into each dish because this isn’t that kind of review, but suffice it to say that we didn’t send anything back and our smiles were consistent throughout the night.

Because it was our anniversary, my husband and I dined at a table for two. If I was going with friends, however, I would make it a point to join Table 153. Table 153 is the defining feature, other than the food of course, of Amass’s philosophy. It sits central to the dining room, near the kitchen entrance, and seats 10. The catch is that you can only book a maximum of four seats at a time, which means you’re going to have to eat with strangers. This isn’t for everyone, of course, but I think that the food, drink and staff at Amass make this an appealing idea.

There is a family feeling to the way the restaurant runs (maybe it’s just that everyone is in suspenders, I don’t know). A long, languid meal with a few old friends and a few new friends is something special. The slight formality of the restaurant (after all, it isn’t inexpensive) creates enough of a distance that, if you chose, you could likely enjoy your meal in companionable semi-silence. But you probably won’t; this is the kind of food you talk about while you eat it.

You laugh a little, you pour yourself a bit more wine. It’s the Danish Jule frokost (Christmas lunch) on a work-day; an introductory course to hygge, the untranslatable word that evokes a cosy gathering by the fire on a bitter winter’s day. For those who think that Danes are reserved, this is their chance to prove you wrong.

Finally, dessert. This is historically my favorite thing in the entire world and was great fun. A rawcorn ice cream with oregano infused cream and fresh cherries served with a heavier hand than the other dishes (more dessert is always better!) was a fantastic note to end on. To me, the ice cream was reminiscent of Cap’n Crunch cereal, WHICH IS A GOOD THING! I love that cereal. It had crunch, the ice cream was creamy and light, and the cherries added just the right balance of tartness. My husband and I agreed that the oregano cream wasn’t necessary, but neither did it take away from the dish.

We finished the night with glasses of my other favorite thing in the entire world, grappa. Love that burn.

By that point, the kitchen was closed and we were given a brief tour of the inner sanctum. The countertops were already sparkling, the dishes immersed in soapy water and the floors swept. The bar was slowly, reluctantly emptying.

That’s the distilled feeling I got from Amass; people loathe to leave. Those who dine and drink there, as well as those who work there. It’s just a good vibe. I’m excited to see what they do next and I’m grateful that we had the chance to sup our way through their luxurious but minimalist menu. Truly Scandi-style, from the kitchen to the table to the stomach.