When you think of Danish pastry, what comes to mind? Maybe some cream cheese, cherry filling, and a flaky dough? “Tourists will come in and ask for the one with cheese, or a salty and savory pastry,” says Lars Konstantin Hansen, manager of Lagkagehuset’s iconic Christianshavns Torv bakery. “[But] we don’t have these in Denmark.” Our beloved cherry Danishes aren’t quite the same as what the Danes are eating at home.

In Denmark, wienerbrød or ‘Vienna bread’ is the umbrella term for a range of flaky, sweet pastries. They’re named after the Austrian bakers who brought the technique of making laminated dough (think croissants) to Copenhagen. The Viennese pâtissiers traveled to Denmark in the mid-1800s after Danish bakers went on strike. (Or so the story goes.) Little did they know at the time, that this cross-cultural exchange would lead to international culinary acclaim. In short, weinerbrød refers to a category of pastry rather than a single pastry, although occasionally individual pastries are referred to simply as weinerbrød.

Today, Danishes or wienerbrød of all kinds are a must-try when visiting Copenhagen. The bakeries are packed with sweet smelling (and tasting) choices. How do you know which ones to try? We’ve done the tasting for you in this definitive guide to all the best Danish pastries.

All these gorgeous delicacies are from Lagkagehuset’s Christianshavns Torv bakery. This location bakes everything daily on site (and yes, the smell is divine). So if you’re into fresh pastries, “come in very early [around 6:00am], that’s when they come right out of the oven.” Thanks for the tip, Lars!

These are all the types of Danish pastries to try in Copenhagen:

These soft, golden pastries aren’t available all year round, so be sure to grab one (or two!) when in season. They’re made by folding rhubarb and marzipan into a milky dough that’s later topped with nuts and/or sugar. A rabarberhorn is not a traditional Danish wienerbrød, but it’s definitely among the popular bakery picks, and with good reason; the slight tartness of the rhubarb is wonderful against the sweetness of the dough. 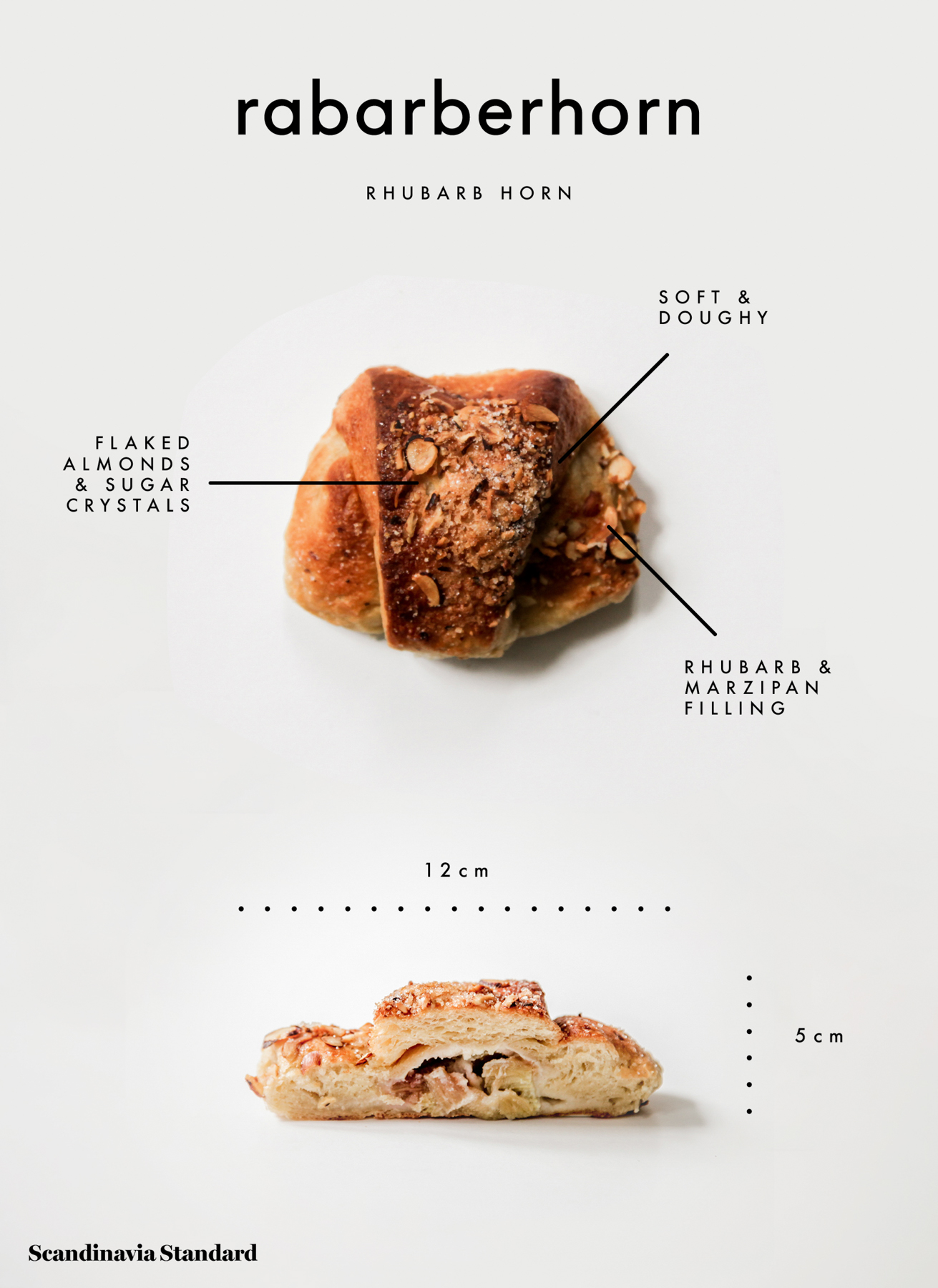 A frøsnapper is a traditional Danish pastry lathered with remonce – a thick paste that’s equal parts sugar and butter. It’s more savory than the other puff pastries thanks to a bit of salt and a generous helping of poppy and other seeds. Great for those who want something with their coffee but aren’t into the super-sweet stuff.

Similar to the Latvian Alexander Torte, a hindbærsnitte is a must-try for all the shortbread lovers out there. These buttery squares are slathered with raspberry marmalade and topped with a thick powdered sugar glaze. If you want to try a hindbærsnitte in Copenhagen, go to Lagkagehuset. They’re generous with their raspberry filling, giving their hindbærsnitter two layers of filling instead of the normal single layer. Think of this one as a slightly less-sweet, elevated pop-tart.

This is the pastry. The inspiration behind the globally recognized “Danish.” The name comes from an infamous prison in Berlin’s Spandau district which, to Danish bakers, resembled the shape of the elevated pastry. Spandauer are one of Denmark’s oldest and most cherished wienerbrød. If you try nothing else in Copenhagen, try a spandauer (but seriously, try way more than that). 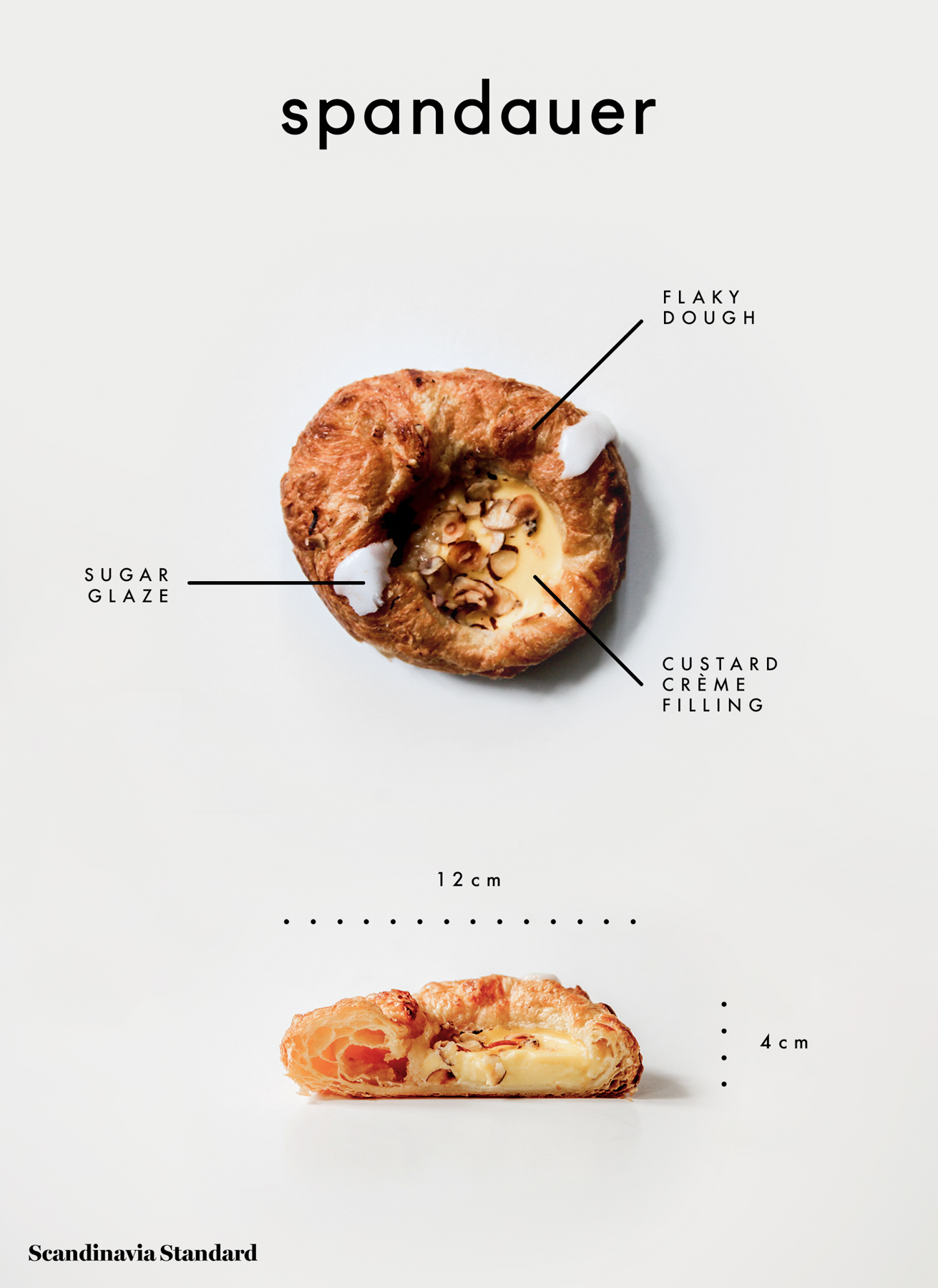 You can just look at a direktørsnegl and understand why it’s one of Lagkagehuset’s best-selling pastries. This frosted spiral bun is chocolate’s unequivocal response to the cinnamon roll. Why, exactly, it’s called a “boss snail” is a bit of mystery, but Lars believes that the name evolved from the pastry’s previous moniker. “It [used to be] called højsnegl or “tall snail” because it was a bit more classy [than a regular cinnamon bun]… like a top hat.”

This classic bakery “cake” is so fluffy and sweet that it’ll convert even the most stringent of cinnamon-skeptics. It’s typically sold as a large cake, but Lagkagehuset is one of the few bakeries where you can buy a slice. Paired with a hot cup of coffee? Heaven! 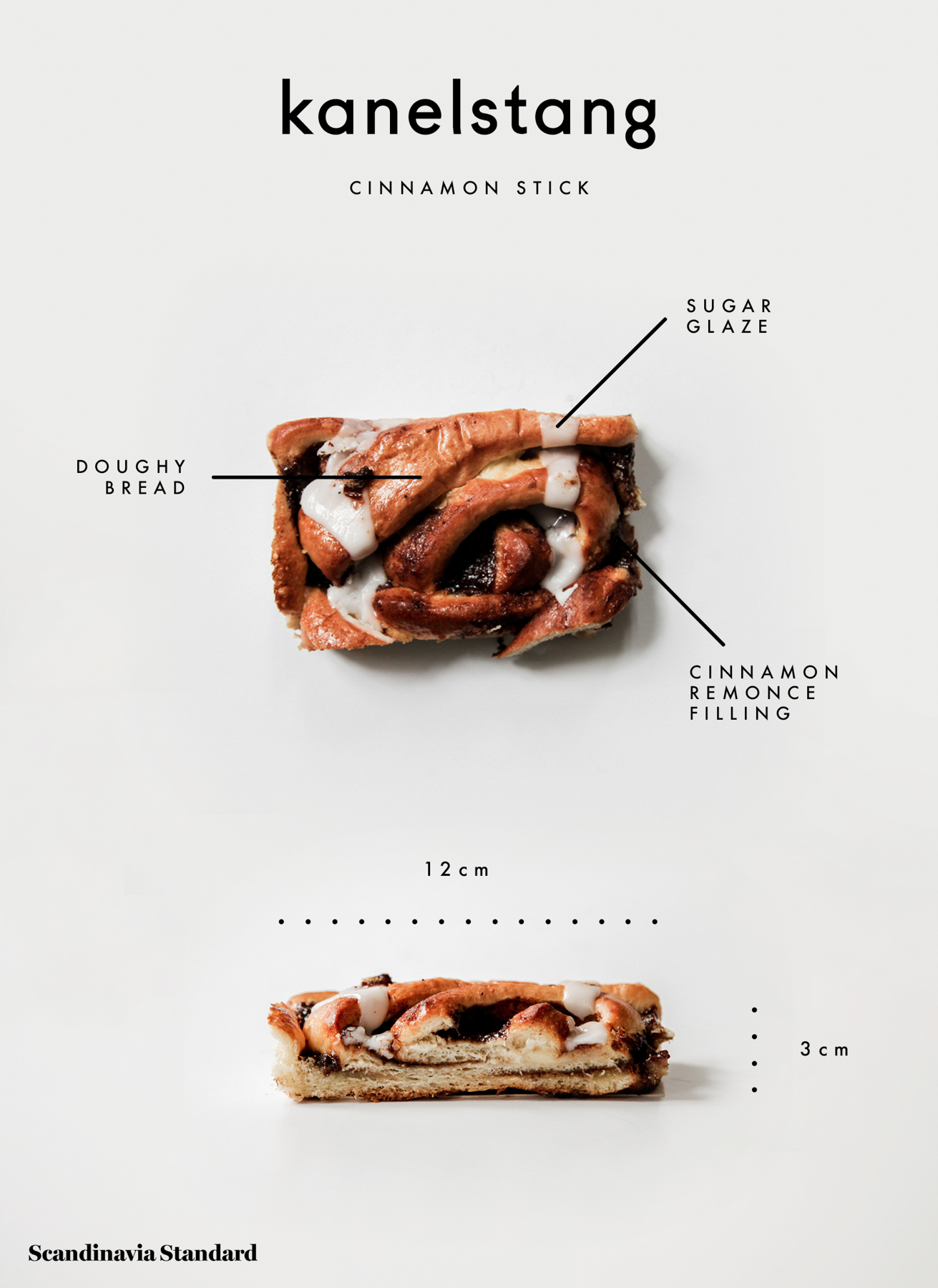 While originally from Sweden, some argue that Danes are ones who truly perfected the cinnamon bun. We choose to remain neutral in this matter, and think that everyone is a winner. There’s not much that needs to be said about the Danish kanelsnegl – it’s tender, flaky, and oh-so-delicious. 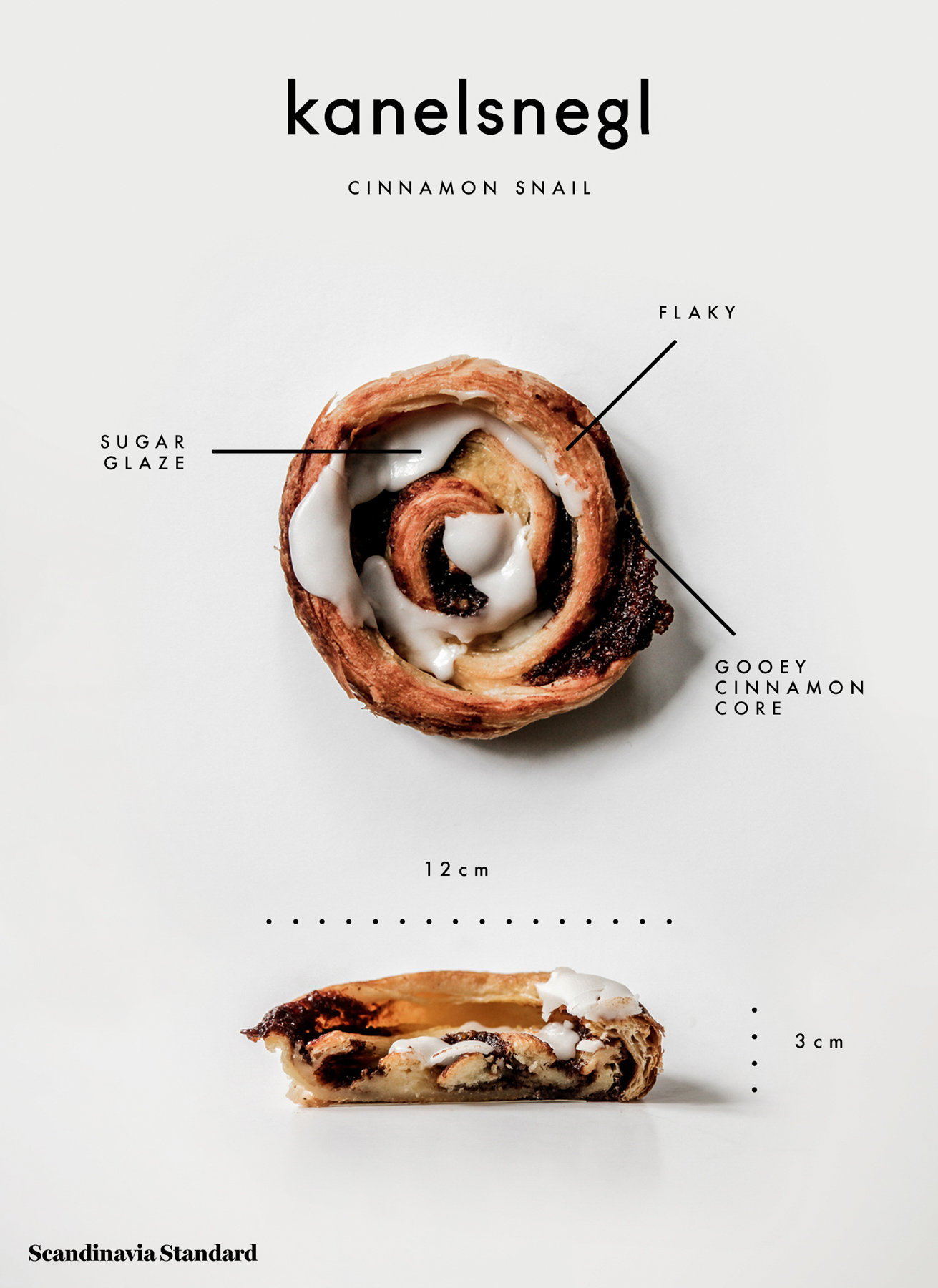 A tebirkes is essentially a frøsnapper that’s been folded instead of stretched and twisted. Similarly, it’s not too sweet and is a little savory; and the poppy seeds add a nice finishing crunch. Make sure to check you don’t have anything in your teeth after enjoying one. 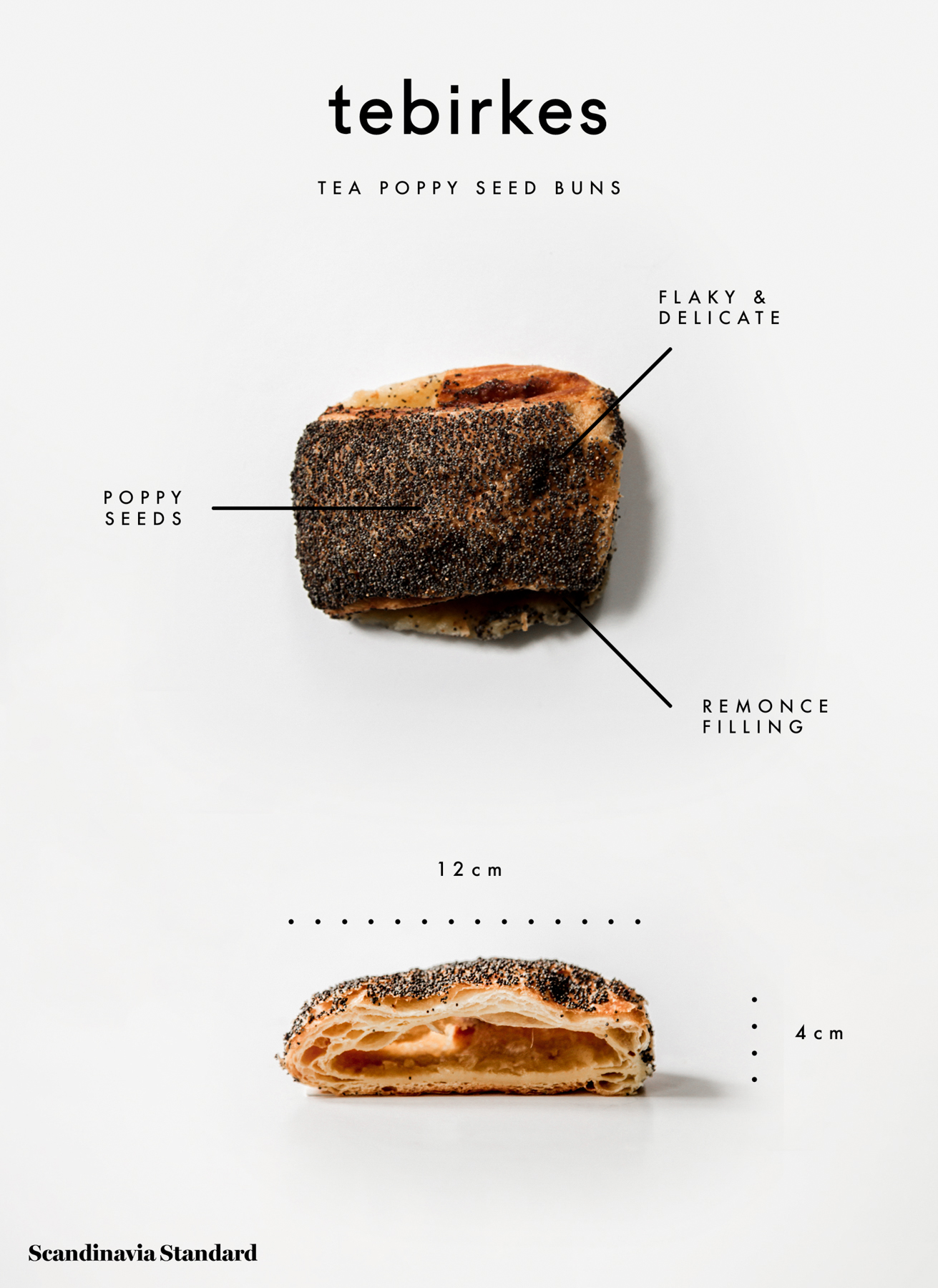 Not exactly pastry, but you get them at the bakery

A romkugle may look like chocolate, but it’s actually a soft confection of leftover pastries and cakes. The darker the rum ball, the more chocolate cake used. And they’re always kneaded with a healthy dose of rum essence.

Romkugler’s cakey filling are also found inside another bakery favorite, træstammer (tree logs). These marzipan and chocolate-striped logs have been a Danish dessert for as long as anyone can remember. 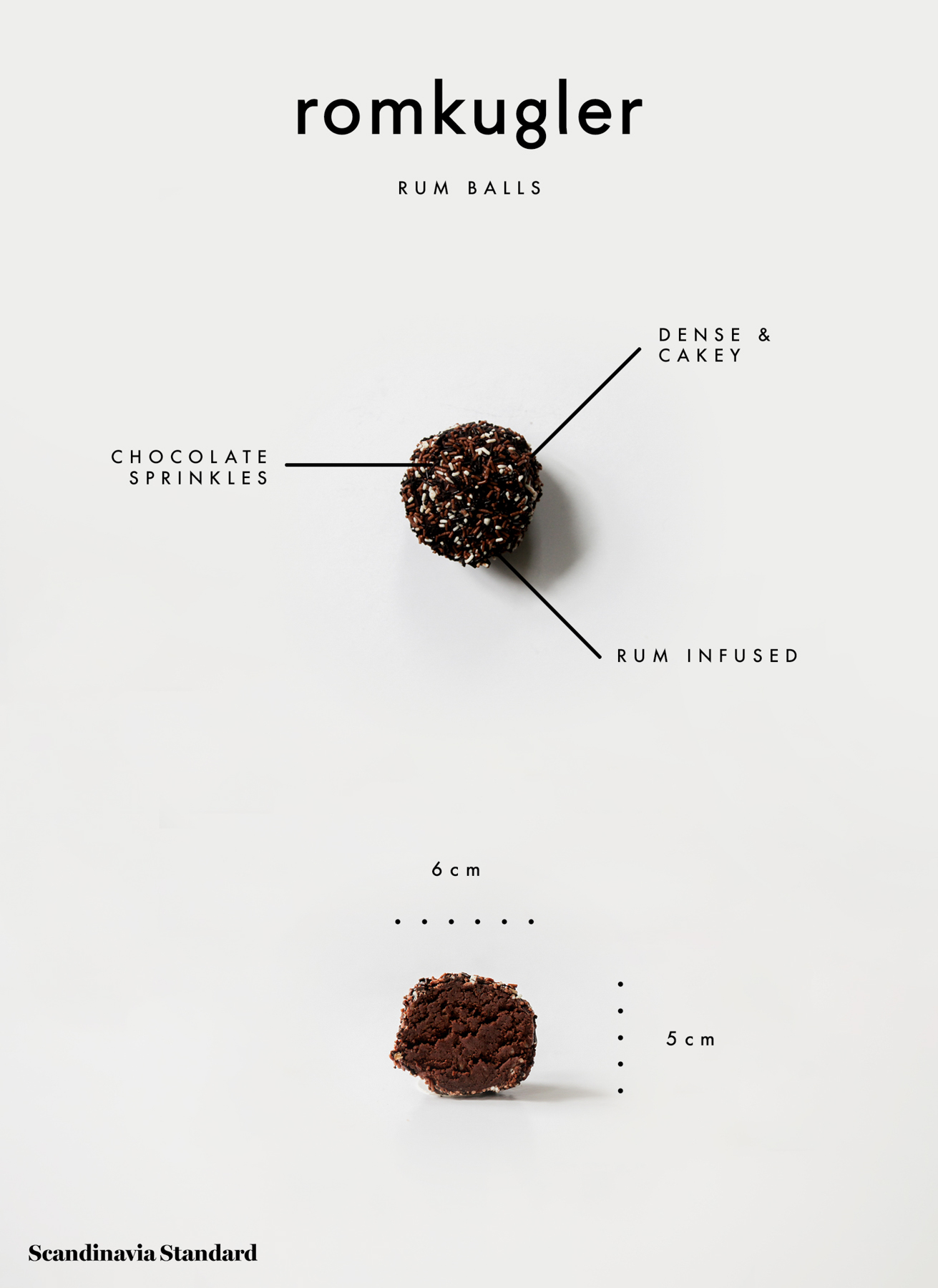 The Danish “pig in a blanket” isn’t snack-sized here; one pølsehorn is almost a full meal. The dough is soft, slightly sweet, and sprinkled with roasted sesame seeds; a nice balance to the smoky pork sausage. Grab this for a quick lunch or snack.

Visit Lagkagehuset to try the best in Danish pastry!

Photography and graphics by Freya McOmish.