Oslo is a beguiling city, easy to explore on foot with stunning buildings and streets to discover at every turn.

It has many famous sights worth visiting, a topic we’ve covered before including a tour of the iconic Opera House, but here we consider six lesser known landmarks with backstories that illustrate historic trends, narratives, and episodes that are often overlooked.

Here are the architectural gems of Oslo, Norway, to look out for in the city.

The area west of Oslo’s royal palace developed as a neighborhood for wealthy residents in the 19th century, including this Italian Renaissance Revival style villa designed by architect Henry Bucher. Its white facade, crowned by corner towers, features lavish details including loggias, columns, pediments, and cornices.

Other decorative elements include three large sculptures in niches at the second level. While their author is unknown, smaller reliefs of cherubs holding a shield are of historical interest because they were created by Gustav Vigeland, then in his early twenties, who went on to become Norway’s most celebrated sculptor.

Later changed to offices, in 2009 the national government converted Riddervolds gate 2 into a facility containing accommodations, meeting rooms, and related facilities for visiting dignitaries. It forms part of a larger complex including two neighboring historic villas, one also used as a guest house and the other as the prime minister’s official residence. The conversion work was designed by RiK Arkitektur and Metropolis interior design studio.

This apartment house by architect Syver Nielsen, with its simplified massing and Norse mythology motif, exemplifies how international architecture trends at the turn of the 20th century and Norway’s national mood, following full independence in 1905, found expression through Oslo’s built environment in the years before the First World War.

Turning away from academic historicism typified by Riddervolds gate 2, Nielsen used a building form influenced by the Art Nouveau movement, better known in Scandinavia as Jugendstil, which allowed for more flexible design solutions. This fresh template embraced technological innovations and allowed a freer hand when it came to decoration, with nature and national romanticism as leading sources of inspiration.

For Tors gate 1, a point of departure likely came from the property’s bounding streets which are named for the Norse gods Thor and Odin.

They are depicted on the building’s wood carved entrance doors and are complemented by reliefs of lions, dragons, and mermaids, plus other elements including balcony brackets disguised as humanoid figures with animal heads.

Completed the same year as Tors gate 1, Heftyeterrassen took Art Nouveau’s rejection of traditional styles a step further, with ornamentation limited to a few elements such as stone name panels above doorways. Curving balconies and gables with rounded windows offer subtle counterpoints to the plastered walls.

A newspaper interview with the developer implied that this sensitivity to beauty and functional needs was due at least in part to the gender of its designer, Lilla Hansen, who was Norway’s first woman architect to open her own office. 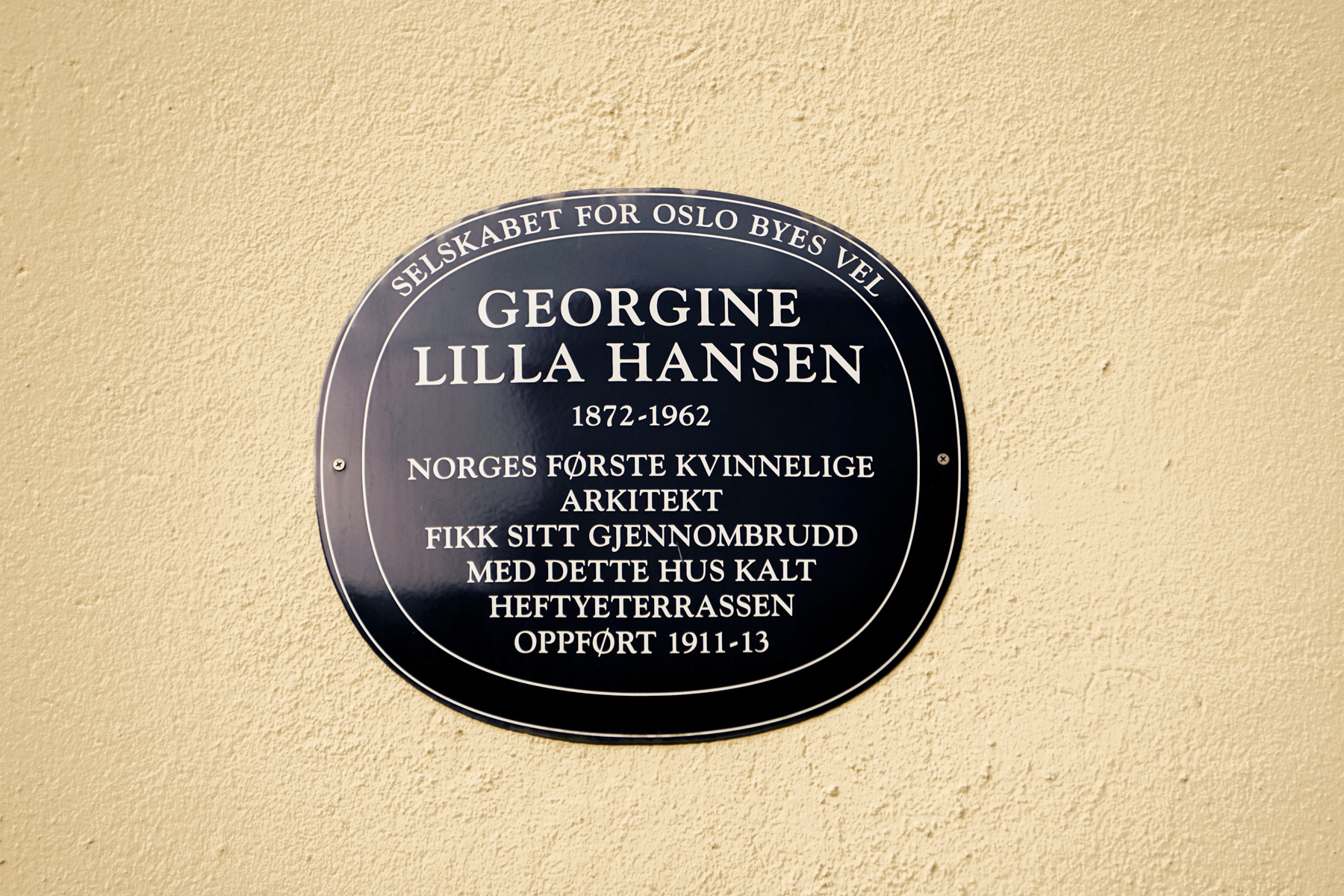 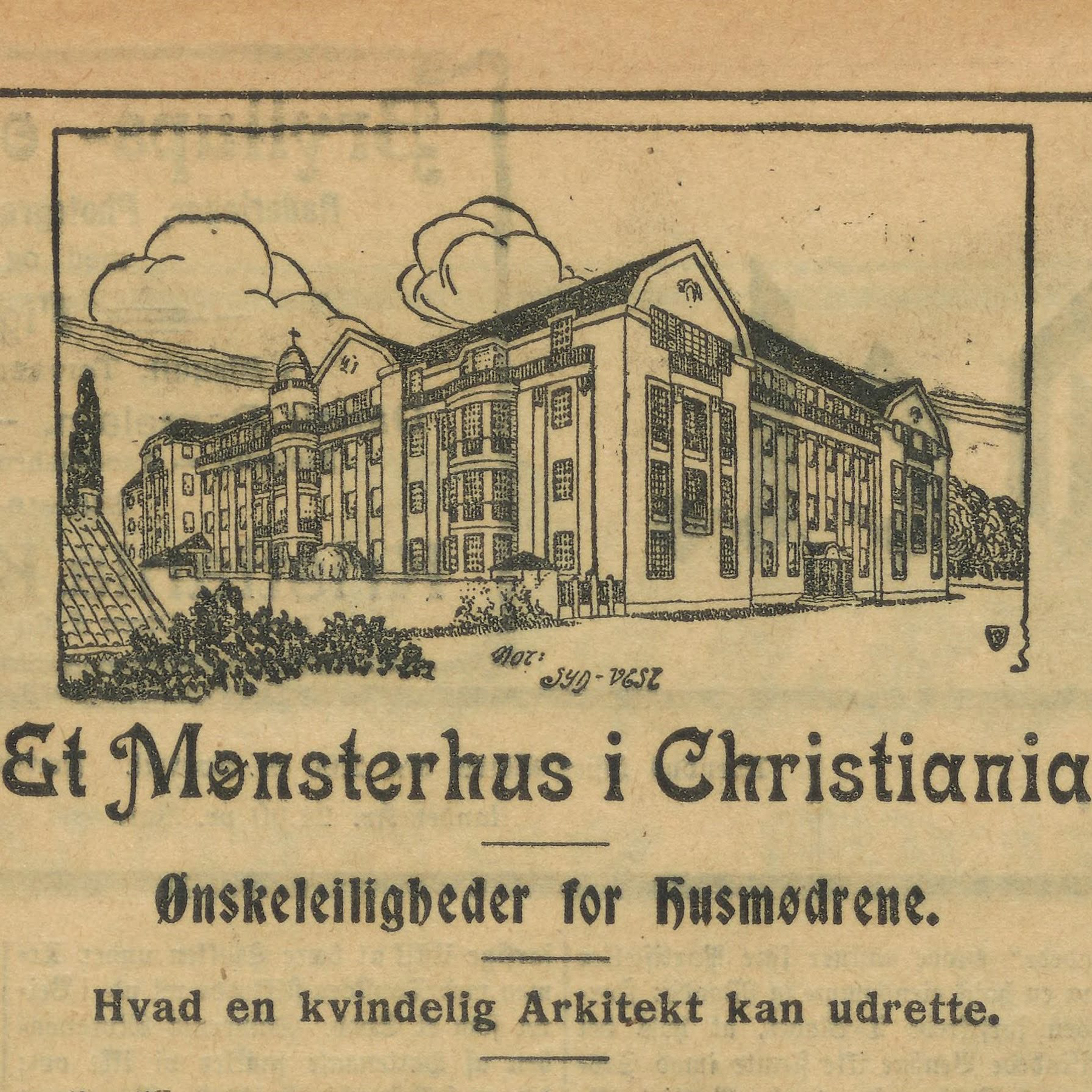 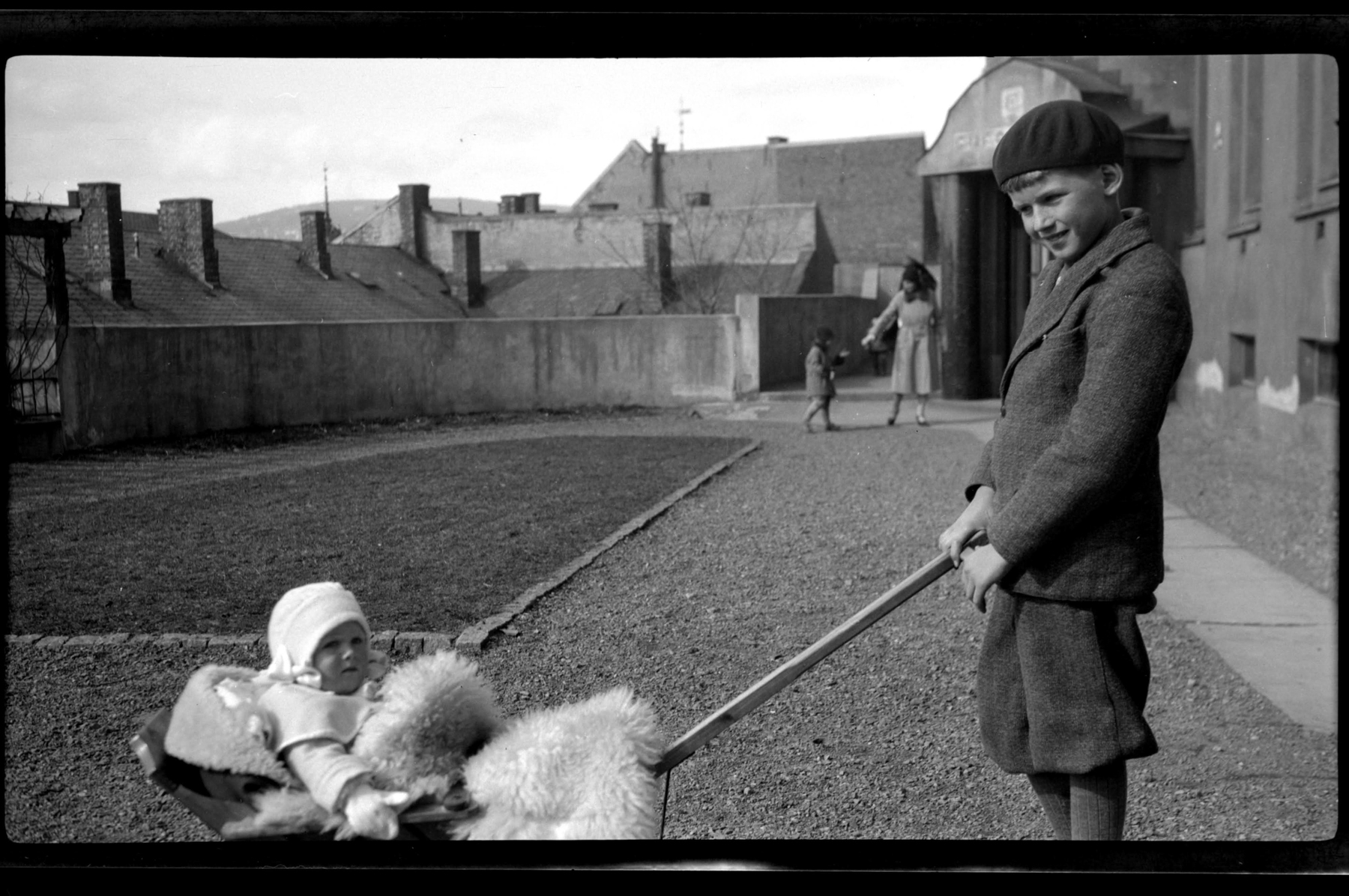 This was Hansen’s first major project, received at the relatively late age of 39 and through a competition rather than a direct commission, suggesting that her femininity previously was not an asset. This was in spite of apprenticeships with architectural masters Victor Horta and Martin Nyrop and the skill evident here. In fact, she only started her own practice after winning this job.

This Brutalist 17-storey skyscraper was developed as a modern business hub by several partners including the Norwegian Industrial Association and the Norwegian Export Council. Indekshuset is a streamlining of its official name: Industriens og Eksportens Hus.

Its functionalist combination of small tower floorplates and large windows on all four sides, facilitated by the exposed concrete frame, produces light-filled offices. Nevertheless, there was still a little room for applied artistic touches such as the use of granite in the prefabricated concrete exterior and Rolf Nesch’s 34-square-meter mosaic “Sildefiske” in the lobby.

To the dismay of some, Indekshuset replaced the English Quarter, an 1880s French Renaissance style residential complex, which by the 1950s had been converted to business occupancy. However, a neighboring 1903 Art Nouveau building survived because its owner refused to sell and the new building was constructed around it. In what seems a delicious bit of irony, the holdout building was called La Belle Sole (“the beautiful sun” in Italian) after a popular restaurant then located there. It still stands and is now heritage protected. 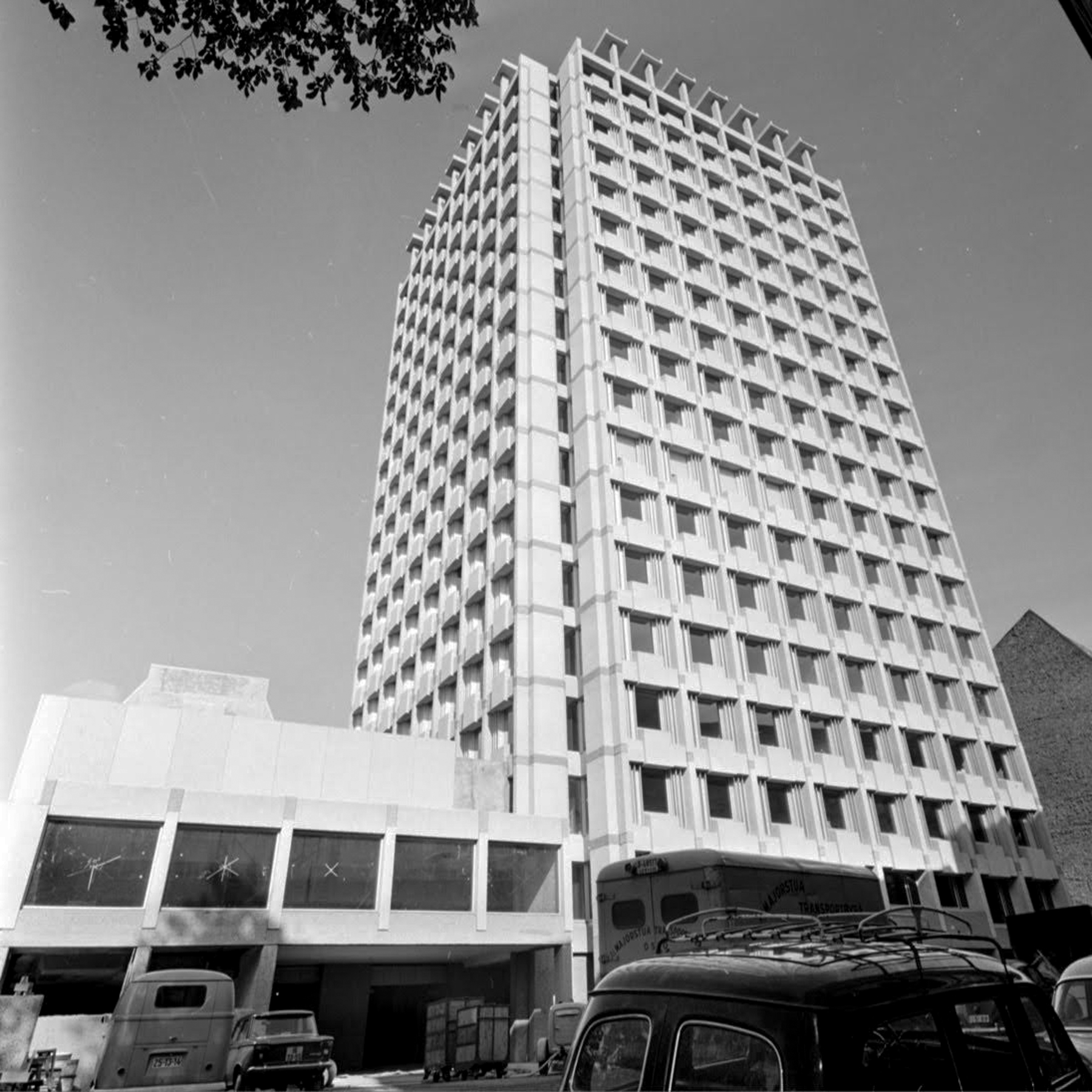 The loss of older buildings like the English Quarter energized Oslo’s historic preservation movement and led to the adaptive reuse of many older structures, such as the Nedre Foss Grain Silo along the Aker River.

After its early 1990s closure, HRTB Arkitekter transformed the industrial relic into Grünerløkka Studenthus, an 18-story student dormitory for 340 residents which opened in 2001. Notable elements included custom furniture for its round rooms, a roof terrace, and windows cut into the original walls, with colorful panels below the glass forming a vertical rainbow pattern rising the length of the tower.

While many celebrated the project, during the 1990s the Grünerløkka Residents’ Group for Aker River as an Environmental Park urged the demolition of the “unsightly and far too dominant … colossus,” echoing local objections in 1953 to the construction of the “giant monster” where “a wide park belt was intended.” 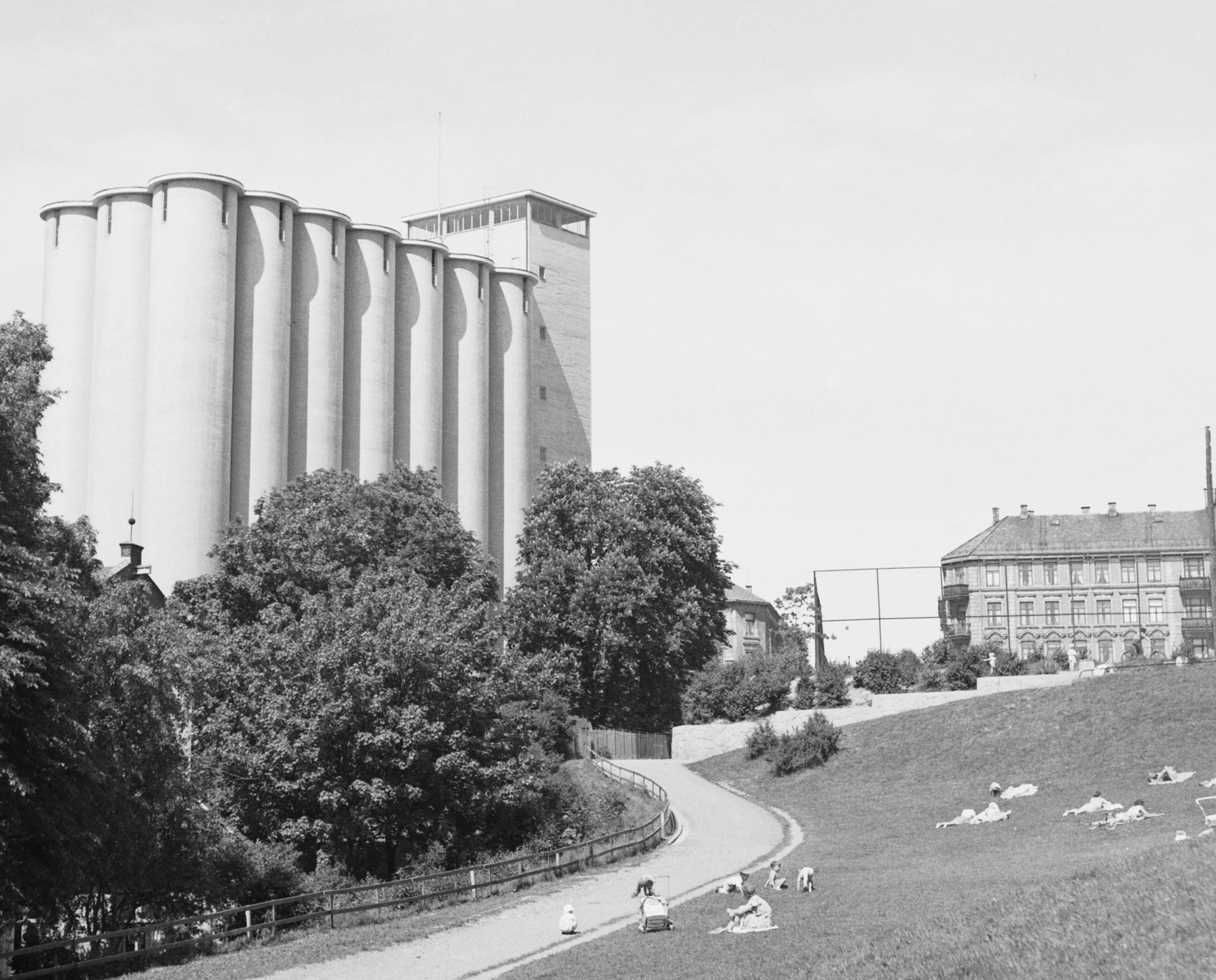 In recent years Oslo’s Bjørvika neighborhood has metamorphosed from a derelict port area into a vibrant mixed use district, anchored by the acclaimed Opera House opened in 2008. One of the area’s latest additions is Deichman Bjørvika Library, completed in 2020 with an adjoining public square named for Norwegian children’s author Anne-Cath. Vestly, on land previously occupied by a highway.

With a facade of transparent, translucent, and white components, it chromatically echoes but does not directly copy the marble and glazed surfaces of the Opera, located across the street.

The 18,000-square-meter (190,000-square-foot) library also responds to its neighbor’s multiplanar massing with an upper level cantilever projecting from its diagonal west wall, which features a stepped underside, an inversion of the Opera’s upward sloping roof plaza.

But, inside is where the design by architects Lundhagen and Atelier Oslo really shines, with vaulted spaces, capped by skylights, extending through its six spacious levels.

Together with its 450,000 books and other holdings plus special facilities such as a recording studio and cafe, Deichman Bjørvika Library is the latest in a long line of Scandinavian architectural library gems.