Ah, joy of Danish smørrebrød. It’s become world-famous over the past decade; so much so, that it was in the running for Denmark’s national dish. Although it didn’t end up making the cut (fried pork with parsley sauce was ultimately victorious), it remains beloved by both locals and travellers alike.

From its humble beginnings in the 1800s, Danish smørrebrød, also known as the open-face sandwich, has grown into a quite the culinary sensation. They’ve become a “must eat” when visiting the country with countless options (and varying price points).

Here are classic Danish smørrebrød options, plus some regional favorites, to try!

Herring is typically the first course of a traditional smørrebrød lunch. If you’re doing the whole shebang, the next courses are shellfish, chicken, red meat, and then dessert.

Marinerede sild, or pickled herring, is about as quintessentially Danish as it gets. For festivities, like birthdays and Christmas luncheons, it is enjoyed with a small glass of aquavit.

Unbeknownst to most travelers, the herring is not raw but salted and pickled in a solution of water, vinegar, sugar, salt, and aromatic spices. The fish is then chopped into thick slices and layered over rye bread with red or yellow onions, brined capers and fresh herbs.

While this smørrebrød is beloved by Danes young and old, the same isn’t true for first-time foreign palates. But, when in Denmark, we say try! Pickling herring is a culinary tradition that dates back hundreds of years. 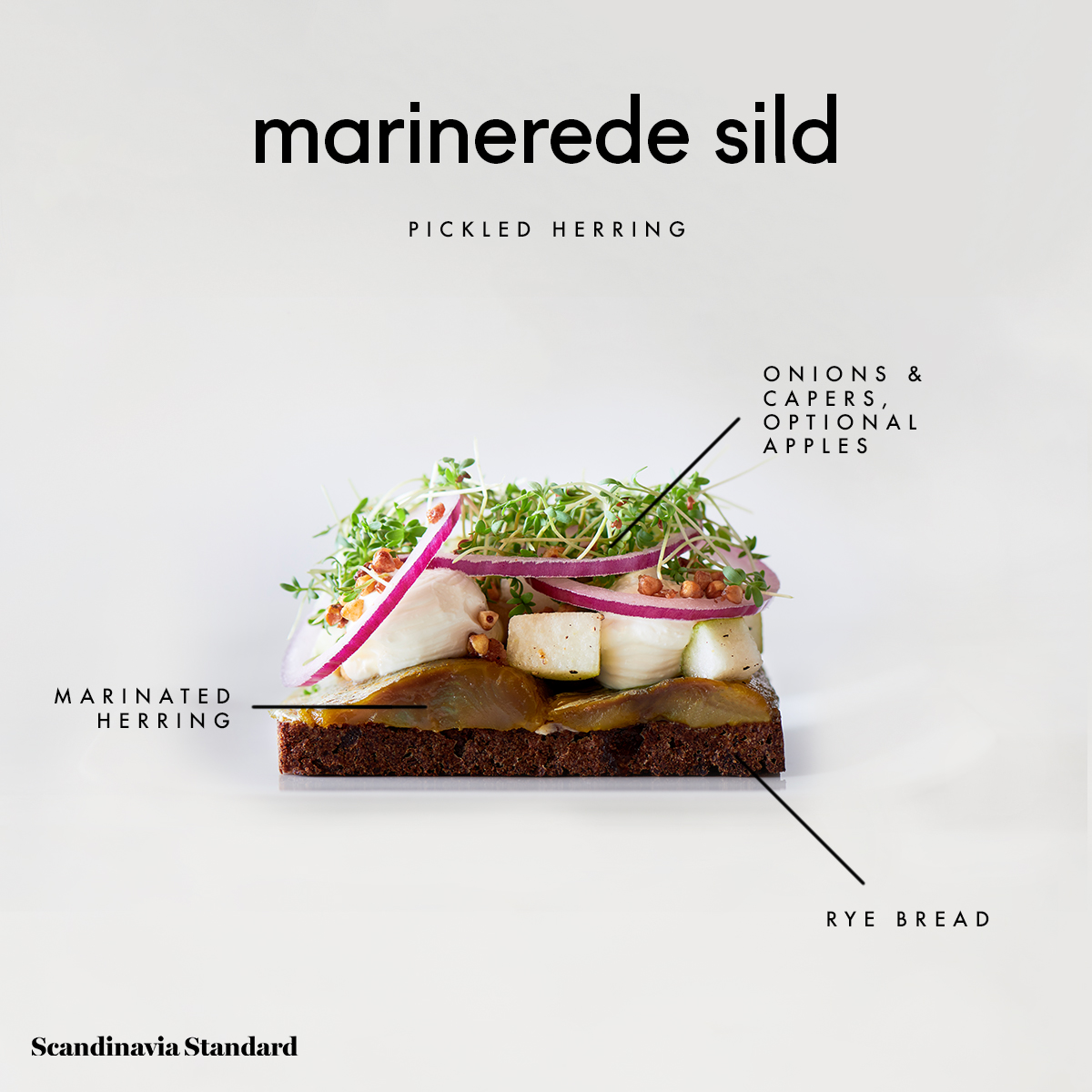 It’s creamy, spicy, salty, and sweet; and the turmeric gives the sauce a distinctive yellow hue. 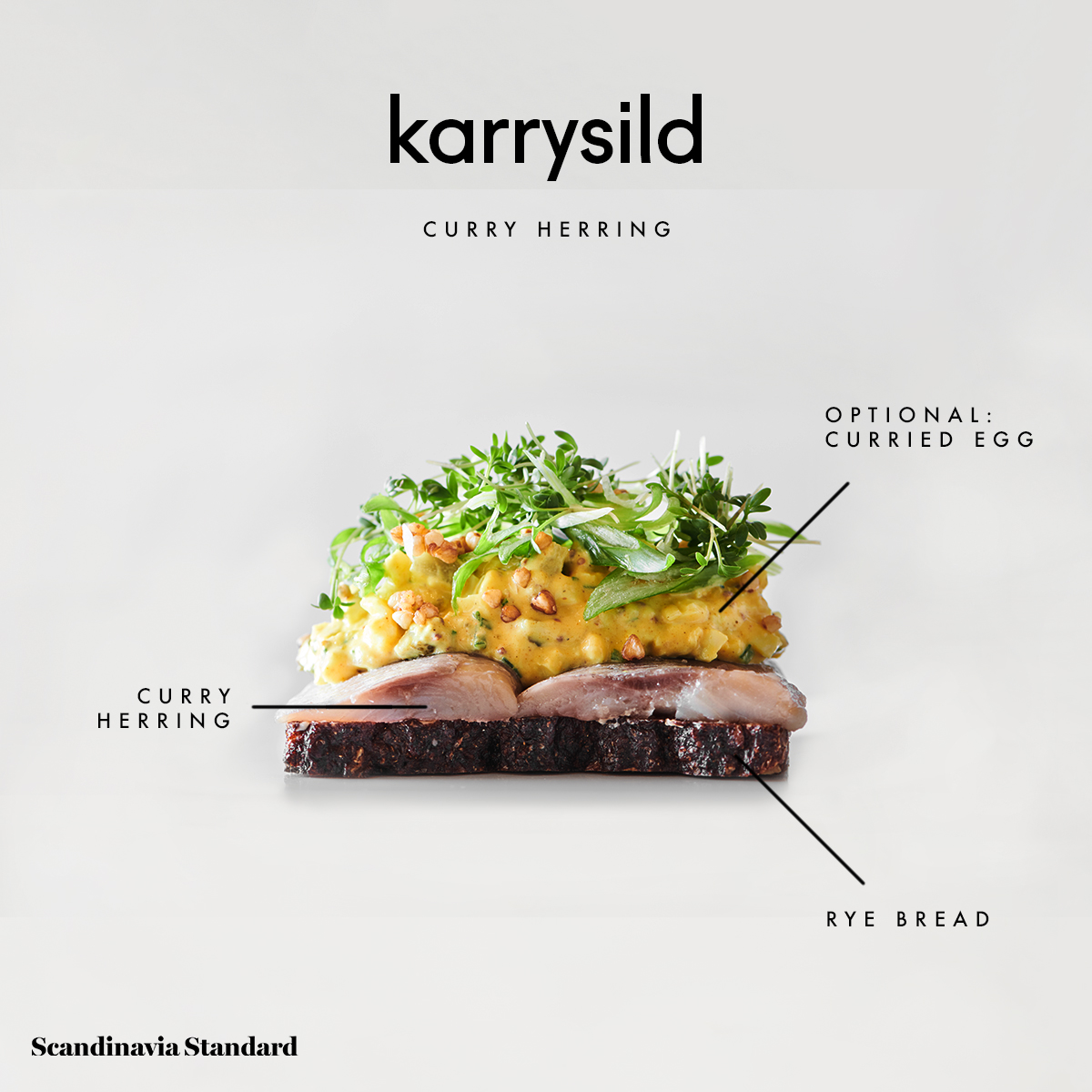 This open-face sandwich may not look like much but it’s a deliciously filling, classic Danish æggemad (egg food).

In the simplest form, it has just five ingredients; however, there are plenty of variations with a wide variety of toppings. 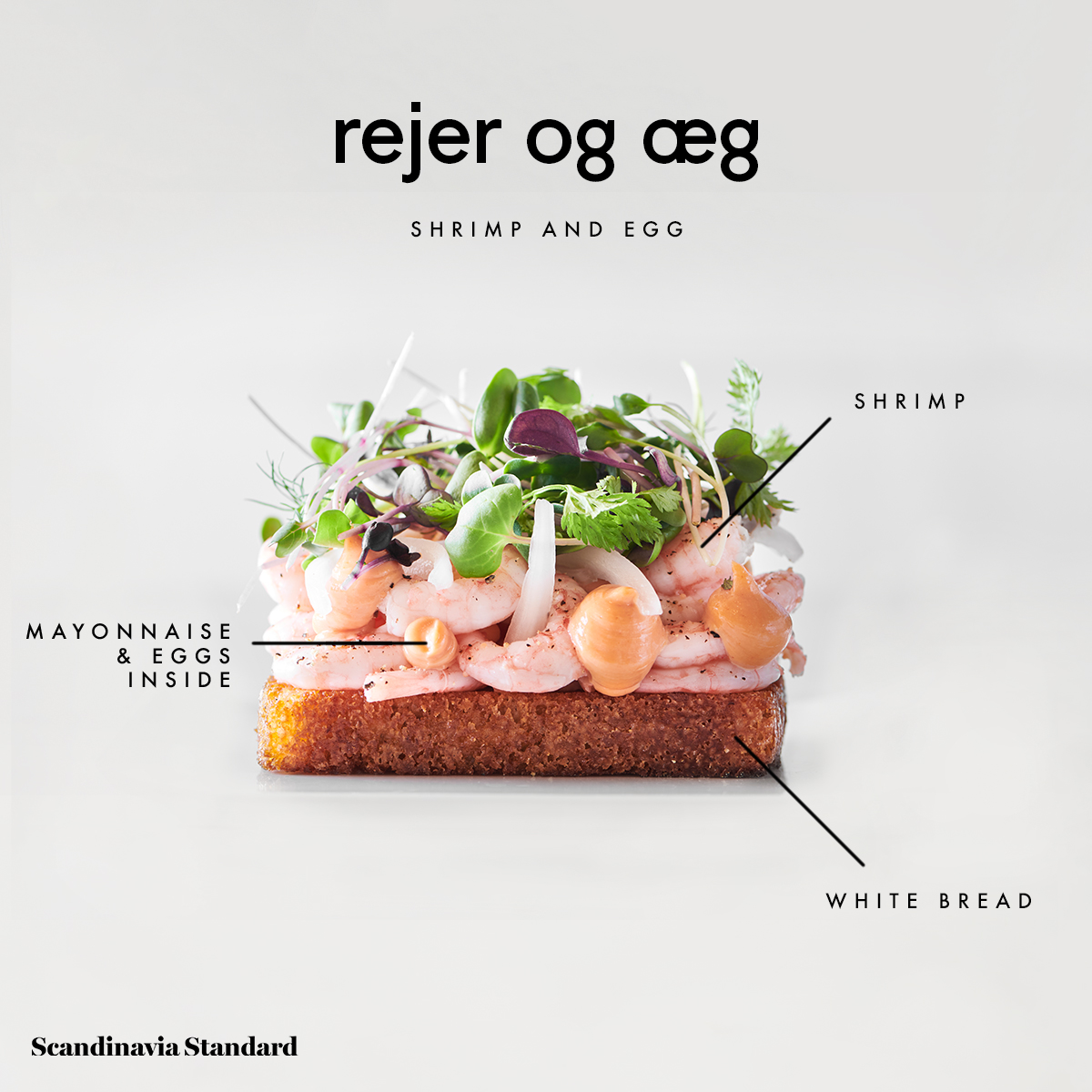 One of the few meat-free smørrebrød, the “potato sandwich” is just that: boiled potatoes on a slice of bread. There are endless combinations of toppings. It’s easy to make, oh-so-tasty, and absolutely filling thanks to the mix of potato and rye bread. 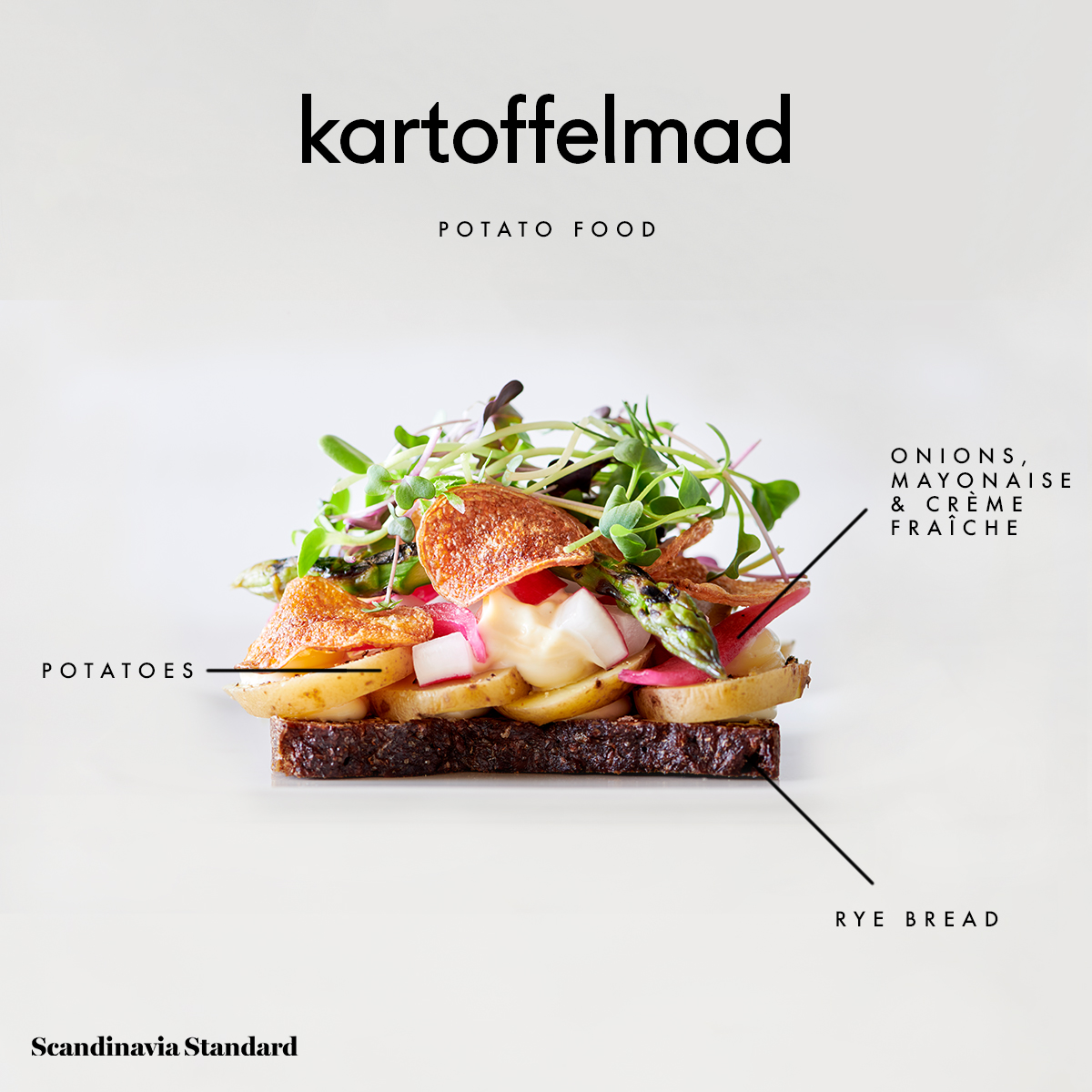 If you’re fond of a chicken salad, then you’ll definitely want to try the Danish take on the midday favorite.

Hønsesalat is not your average mayo salad; its got mushrooms, mustard, crème fraîche, and (sometimes) a dash of honey or curry powder.

Asparagus and bacon are usually incorporated, either as toppings or within the hønsesalat itself. 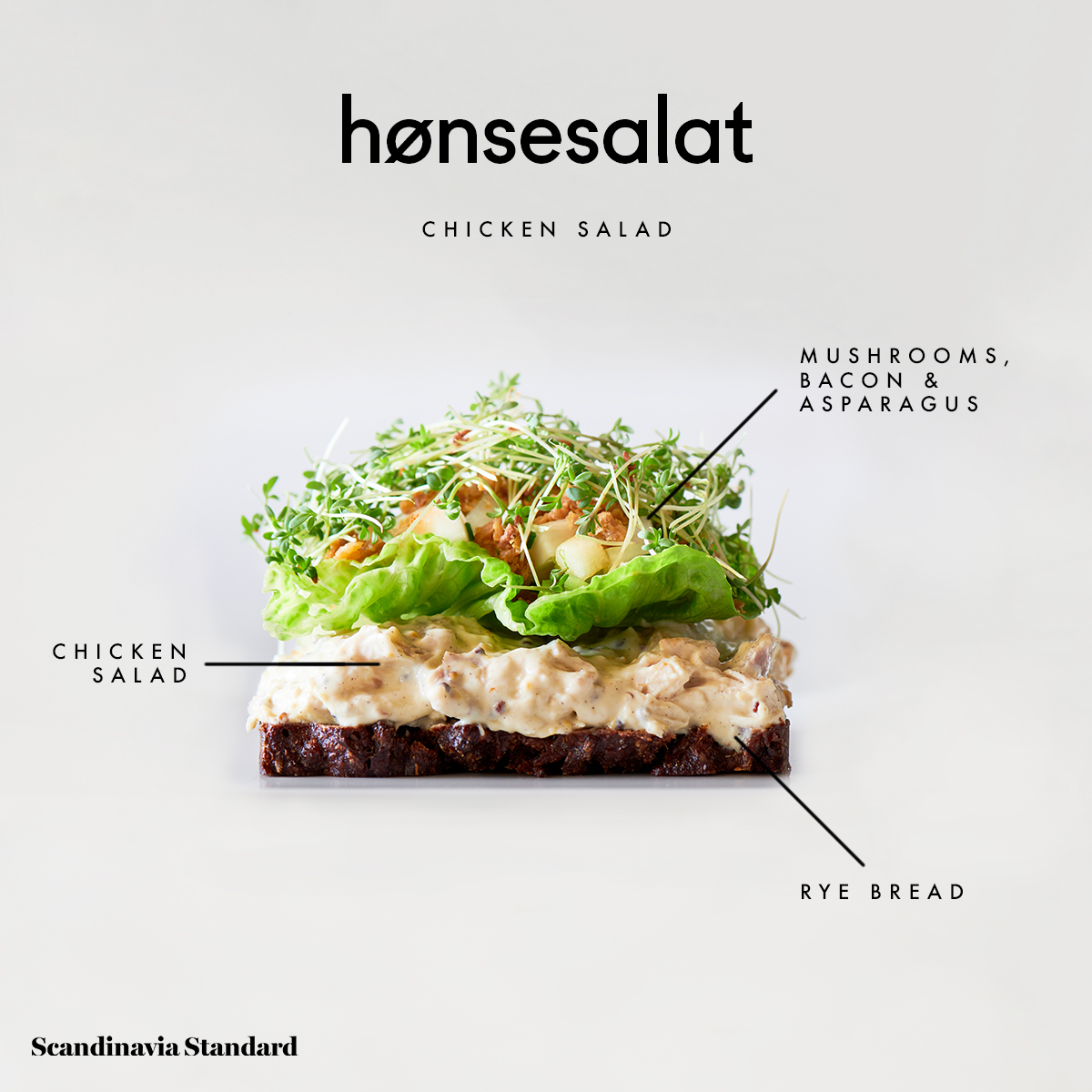 When American kids are having PB&J, Danish schoolchildren across the pond are munching on a thick slab of liver pâté. Leverpostej is a meat spread made from pork liver and lard, wheat flour, and onions. 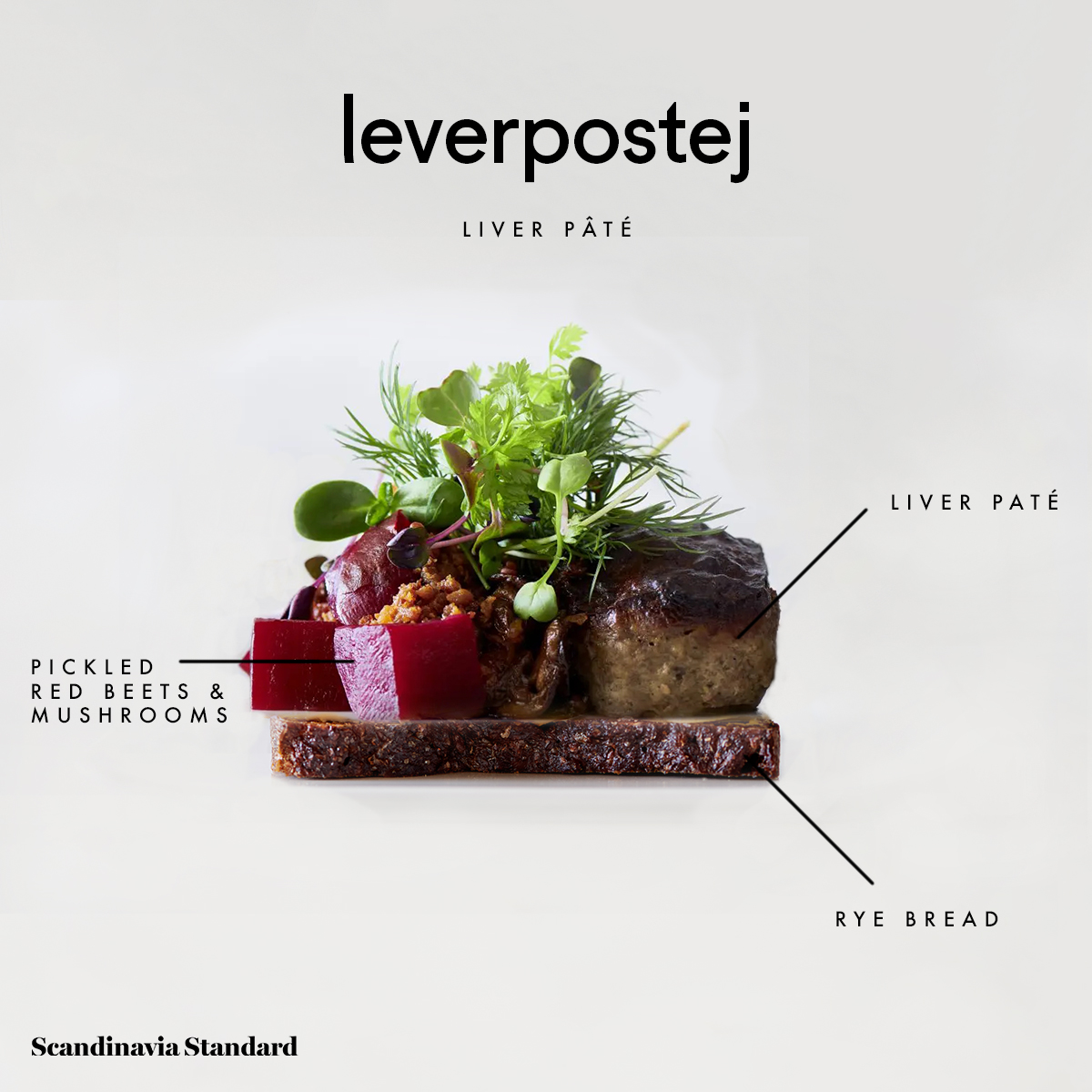 A roast beef open-face sandwich is another one of those standard Danish smørrebrød. You’ll find it garnished lavishly, or sometimes not. Don’t be fooled by the trimmings; the least ostentatious may be the most flavorful of the lot! 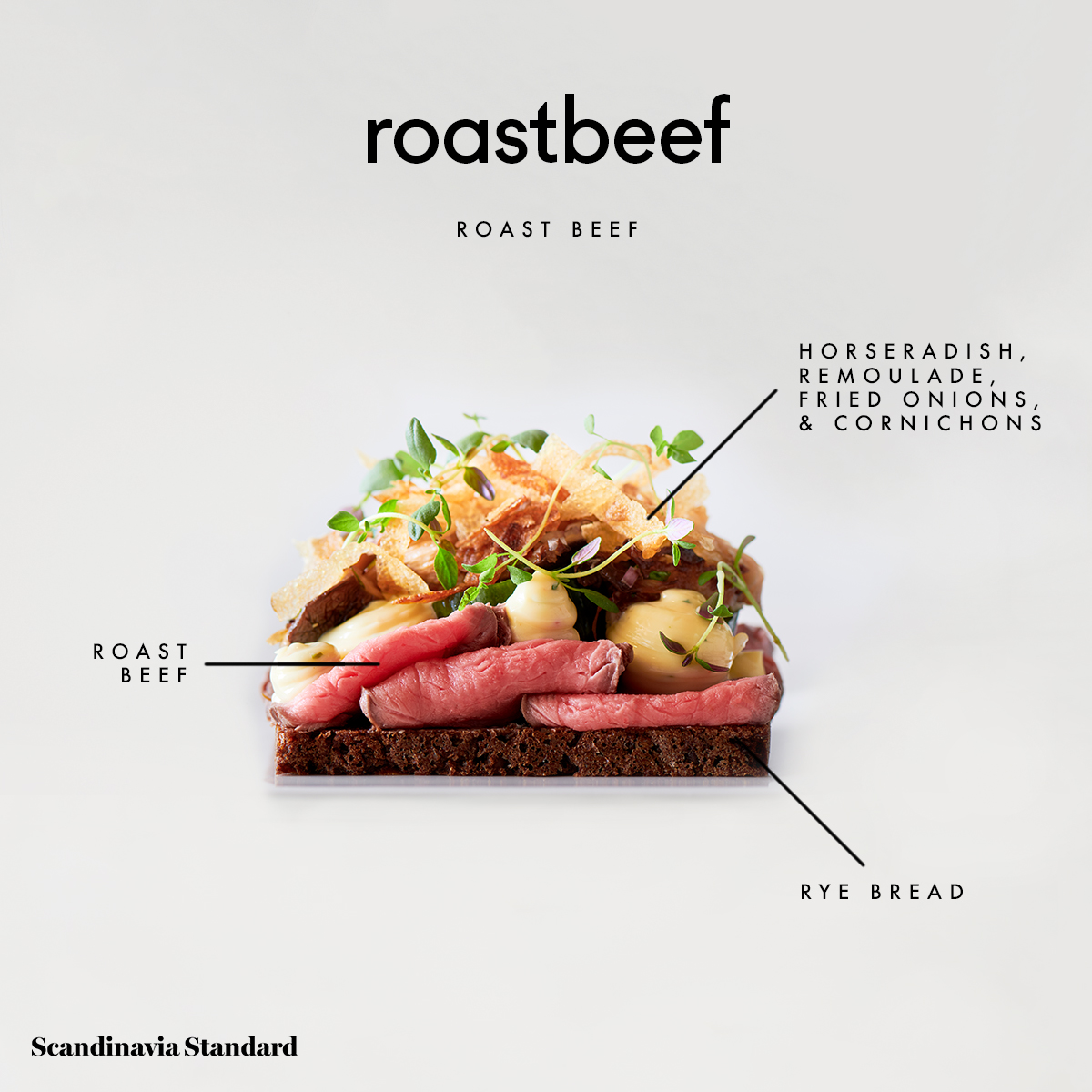 Beef tartar is popular in Denmark and is often eaten as a first or second course in traditional meals. The smørrebrød version comes in many forms, but usually includes cornichons, capers, and some crunchy potato chips on top. The most beloved version includes a raw egg yolk, which offers a lovely texture – almost creamy – as well as flavor on top of the moist beef. 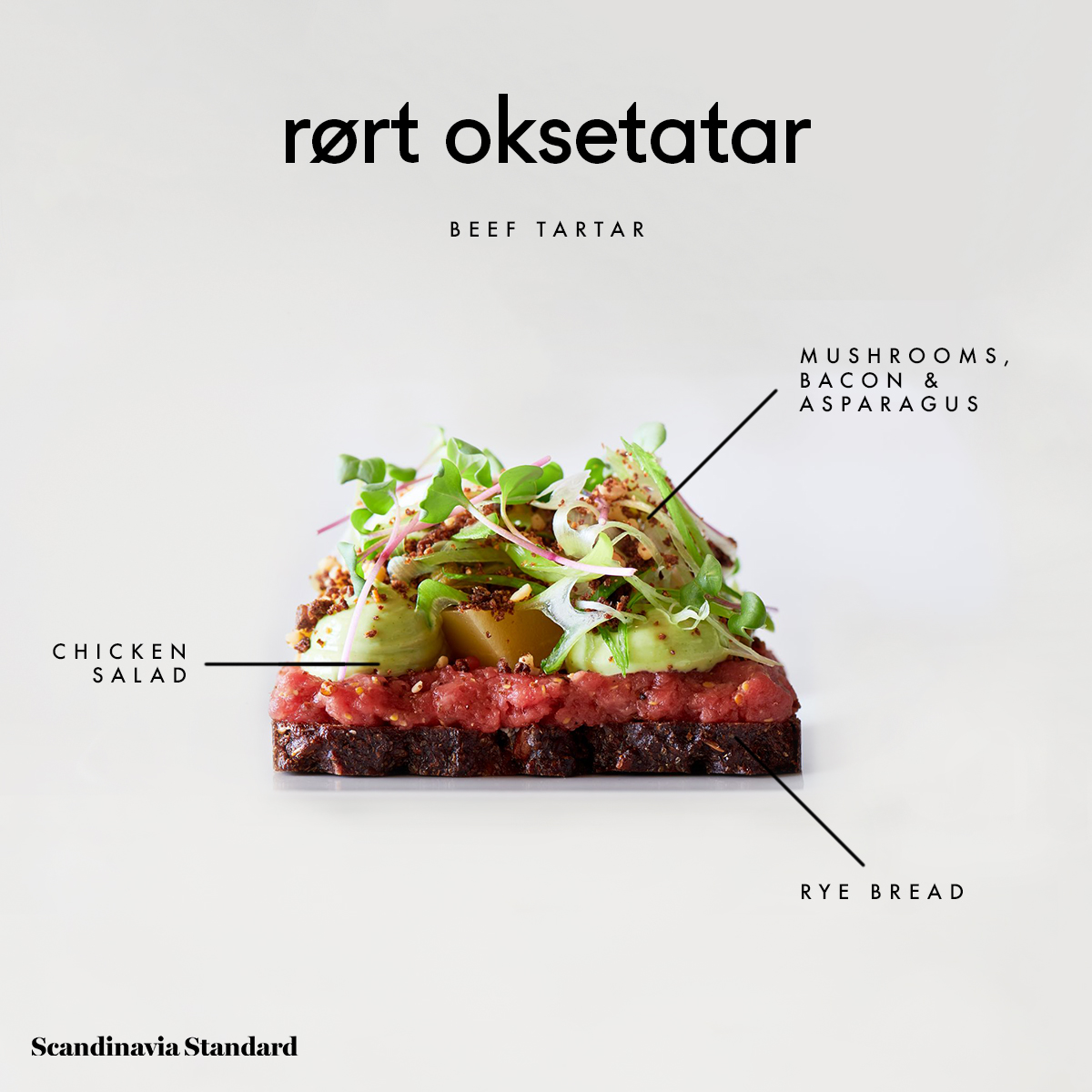 How do I eat smørrebrød?

Sure, you could pick it up with your hands, but only if you wanted everyone to stare in disapproval. Danes always enjoy an open-faced sandwich with a knife and fork. So, when in Denmark, why not follow suit?

How do I make Danish rye bread?

Though it’s a staple of supermarkets, and incredibly inexpensive, in Denmark, Danish rye bread (also called rugbrød) can be hard to find around the world.

Want to make your own? No problem; we’ve got a great Danish rye bread recipe for you.

All images are courtesy of Aamann’s, a collection of smørrebrød restaurants in Copenhagen, Denmark. See more on Aamann’s here.