Christmas in Finland hasn’t lost it’s holiness, despite how secularized Finland is today. People work hard throughout December so that they can spend joulu (Christmas in Finnish) with their families and dive into a world that smells of glögi and gingerbread.

As is true in the rest of Scandinavia, Christmas Eve is the main day of celebration. The 25th and 26th are national holidays when most stores are closed and cities around the country quite down.

During these days, snow is an occasional luxury, and musta joulu (“Black Christmas,” referring to the asphalt concrete streets) is becoming more and more common, especially in Helsinki and the south. Luckily, Finns know how to really know how to get into the Christmas spirit!

Amid November gloom, Christmas calendars of different shapes and sizes arrive in stores. Originally a tradition for children, the calendar (also known as an advent calendar) has grown popular amongst adults as well. The design is simple: one flap to open every day from the first of December until Christmas Eve.

In addition to the classic cardboard or chocolate calendar, with a treat behind every flap, there are now cosmetic brands and breweries with their own versions of countdown fun. This is the time when normally collected-and-proper-Finns let their inner children out and embrace the festive spirit. 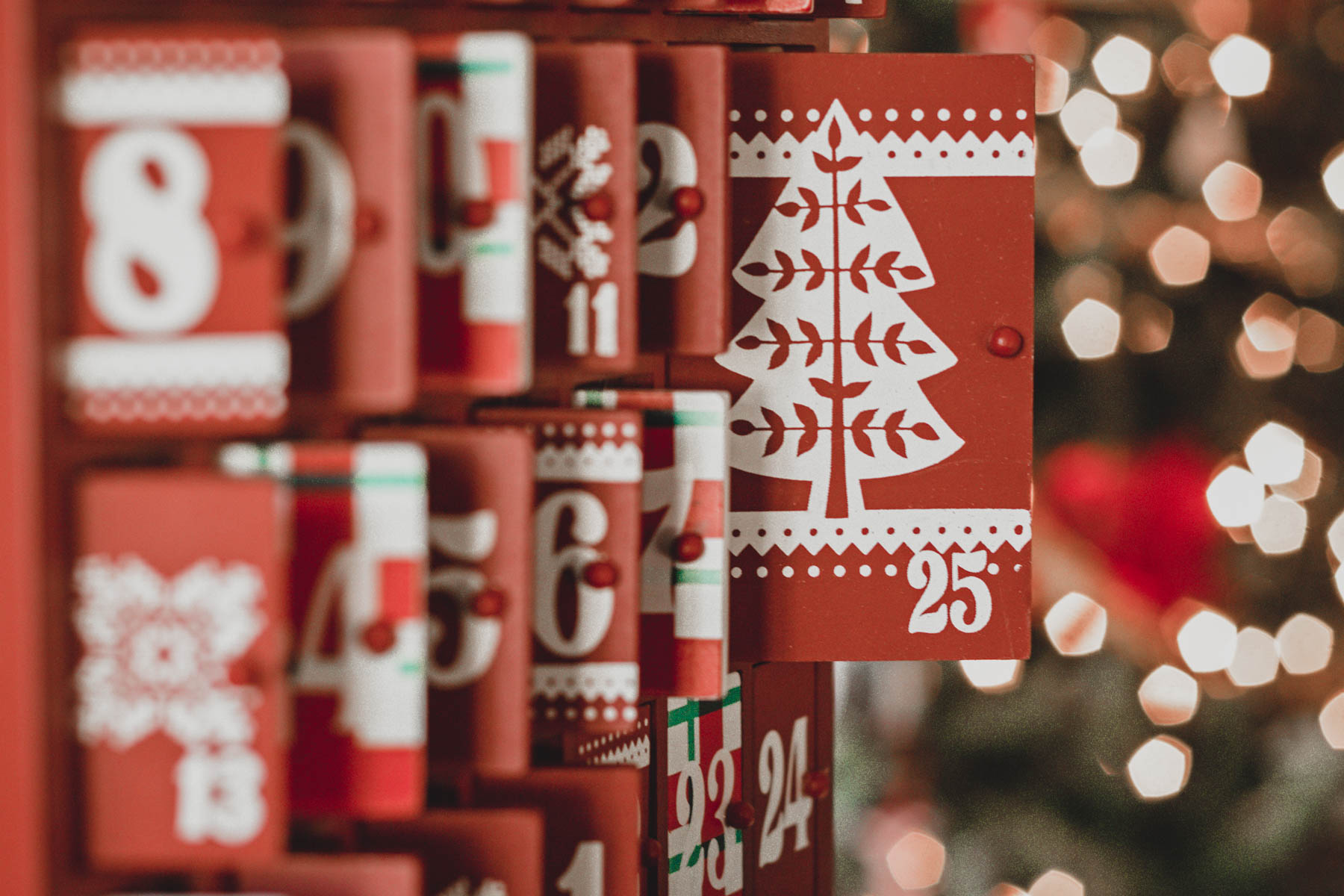 All year long, children are warned: Santa’s elves are always watching you! With Christmas getting closer, the kids are urged to write a letter to Santa, telling him how good they’ve been throughout the year and what they’d like to receive for the holiday.

The children then leave their notes in a mailbox or a glass jar outside. Santa’s elves collect the letters during the night. Imagine my disappointment when I once found my letter in my mother’s purse! 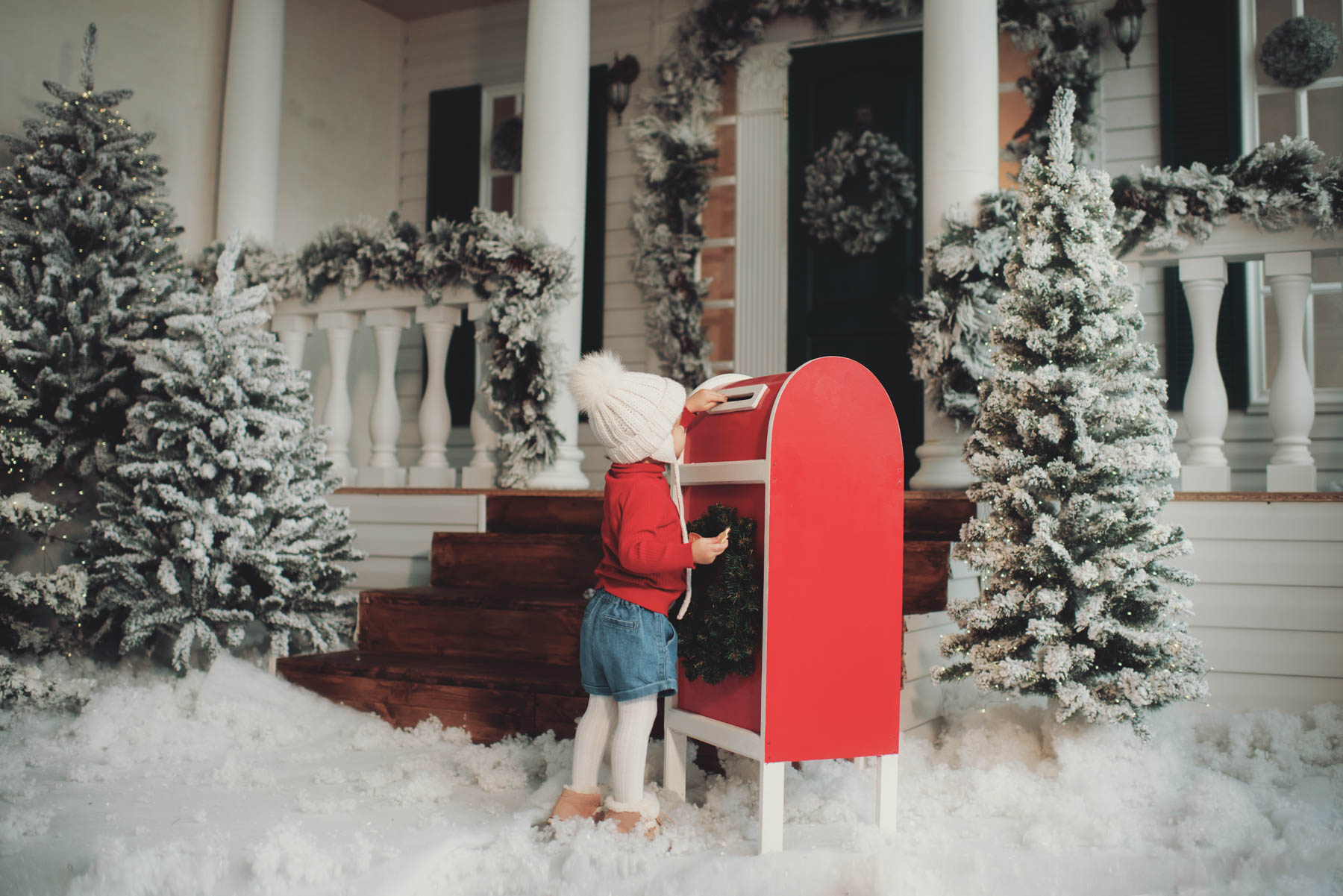 Pikkujoulut is a party many await (and others dread) all year long. Since Christmas in Finland is considered a family gathering, pikkujoulut gives adults a chance to celebrate the Christmas season with friends and colleagues. The tradition is similar to an office Christmas party and Denmark’s julefrokost.

In the past, pikkujoulut has involved heavy drinking and a big night out. Due to so many of these evenings gone wrong, it has become a national joke, symbolizing people’s most embarrassing moments. Thanks to this reputation, the parties are slowly becoming a little less liquid.

Lucia, much like in Sweden, is not particularly connected to Christmas. It’s more about the darkness that covers the North in winter. Due to the timing, though, Lucia is often associated with yuletide anticipation. For Swedish-speaking Finns, which is about 6% of the population, Lucia is a highlight during the advent season.

On the 13th of December, a girl with candles in her hair and a long, white gown spreads light and joy. Lucia, who is chosen annually by the people, spends the month touring hospitals, retirement homes, and other places where some light might be needed. 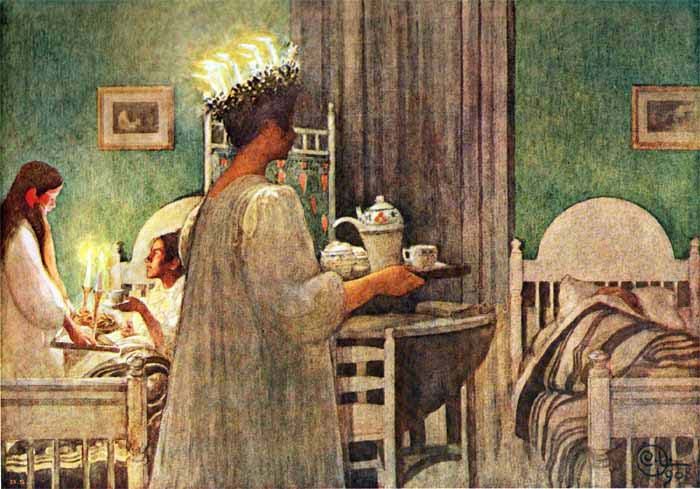 A fluffy pine tree indoors is a Christmas staple. In Finland, as in many places around the world, the tree is carefully chosen and decorated.

An ornament unique for Finland is a himmeli: a symmetrical figure of straw that can either be small enough to have as a tree ornament or large enough to hang in the window.

In December, the sun sets as early as after 3 pm in the capital. But while the world grows darker, Finnish homes (literally) light up. Electric candle trees are a common sight in the evening; a log, shaped like a bridge or the letter V, holding seven candles. This decoration shines in most windows, both private and corporate, throughout the winter season.

Christmas, in most places, is a happy and joyful celebration. But the Finns can’t escape their melancholy nature! In many ways, Christmas is a serious and heartfelt occasion. Maybe it’s the national war traumas, or the fact that a lot of elderly people feel lonely during the holidays, or that this is a high-risk time for families with substance abuse. Whatever the reason, Christmas – even the music – is a time for reflection and honoring what’s been lost. The music (if not for children) tends to be in minor keys and tells the tales of longing and loss.

Christmas Markets are an old and dear tradition. With seasonal foods, warm drinks, crafts, and handicrafts for sale, the atmosphere is usually magical. The oldest and biggest outdoor Christmas Market in Finland is the Senate Square market, called Tuomaan markkinat. 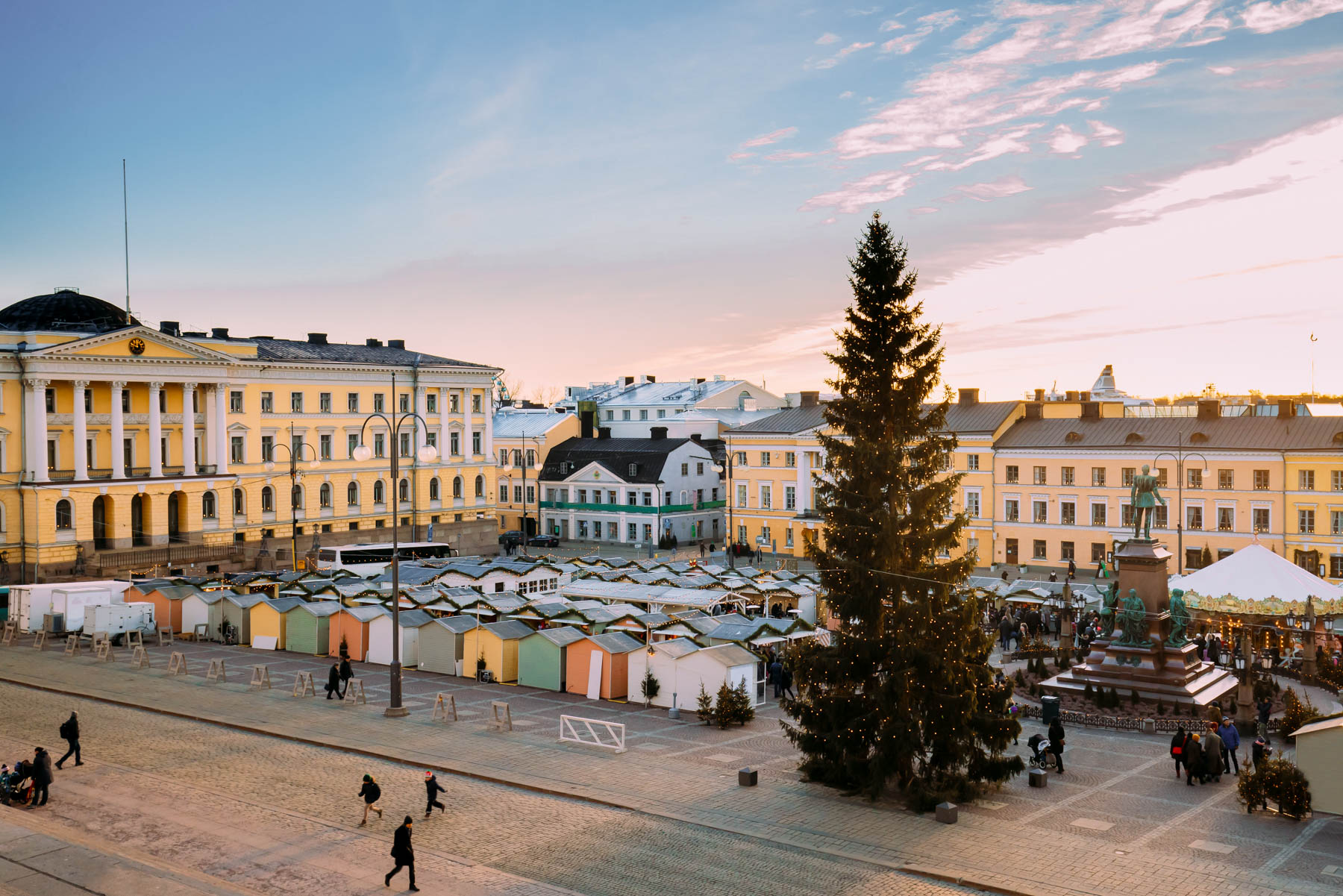 Finnish gingerbread is not only a cookie, it’s an experience. Making it is a fundamental tradition for any family with kids. For a lot of children, the eating part is completely secondary to the baking process.

The baking consists of a few key moments: first, pressing your carefully chosen cookie cutter into the soft dough over and over again. While the cookies are baking in the oven, you lick the bowl for leftovers. When the gingerbread is baked, you decorate it with the frosting. For those who would rather not bake, there is ready-made gingerbread in every store during the holidays.

A grown-up delight is eating the gingerbread cookie with a piece of blue cheese on top. It’s a culinary experience that might surprise you!

The joulutorttu, a puff pastry shaped like a star and filled with plum jam, is an old classic. This tart is, much like gingerbread, a pastry most Finns baked during childhood. Even for those who may not be too into pastry, thejoulutorttu is a treat as it’s not too sweet; it’s airy, soft, and crumbly with the lush plum in the middle. 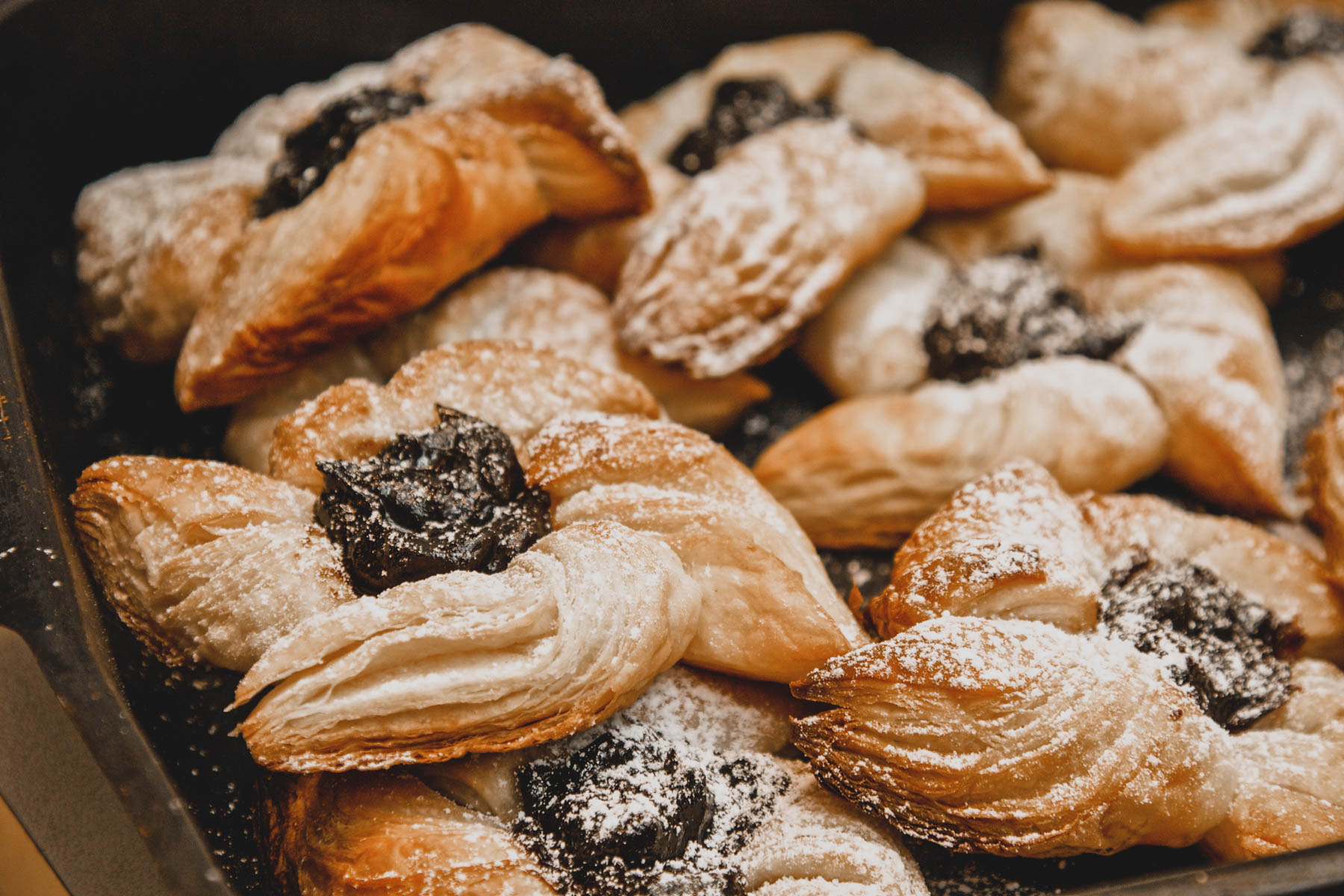 The smell of hot mulled wine is a true slice of heaven. Similar to Central Europe’s glüchwine and Sweden’s glögg, glögi is served both with and without alcohol. Whether you like your glögi with a teaspoon of almonds or raisins (or neither, or both!), having a cup is always a great social occasion in December,

Glögi marks the holiday season in many regards; the glögi brand Blossa launches a new design for their bottle every year. This way every year’s bottle is an exclusive and collectible product. 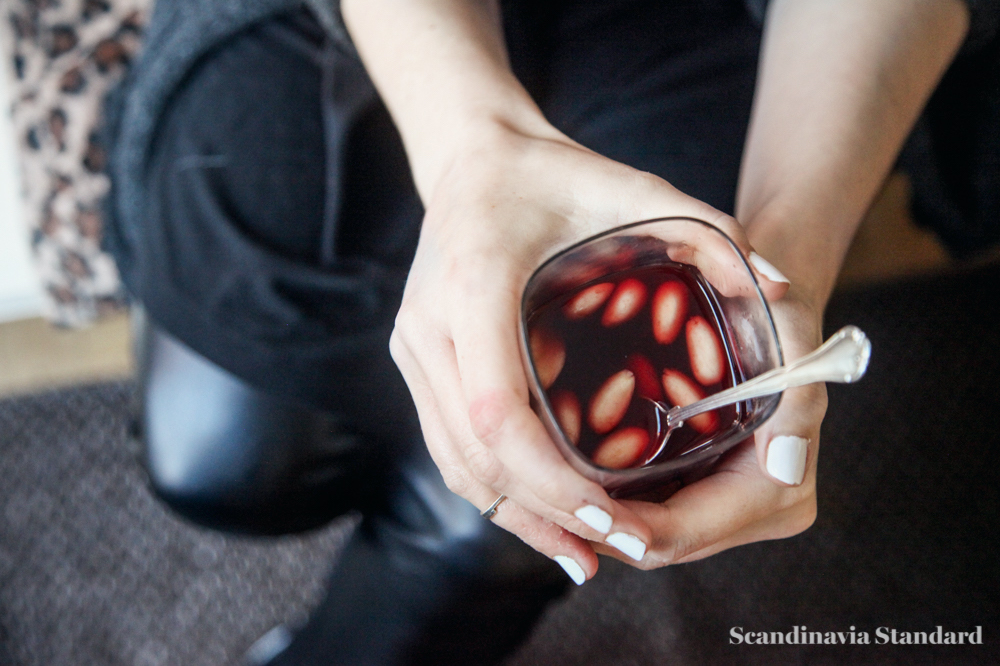 This is the only way to kick off Christmas Eve morning: turning on the TV and watching Santa Claus talk to kids on the phone. Joulupukin kuumalinja, the Santa Claus Hotline, is a live stream from Santa Claus’s shed in Rovaniemi. There, the elves make presents and Santa chats with children on the phone before heading out to deliver their presents. Spending Christmas morning listening to a busy phone line is such a vivid memory of my childhood; half the kids in Finland wanted to reach Santa, but only a lucky few got through!

Christmas breakfast – either before, after, or while watching the Santa Hotline – is always rice porridge with an almond hidden in it. Some families eat the porridge for lunch instead of breakfast. Whatever time of day you eat it, it’s best if you do it in a group; the hidden almond creates a fun sense of suspense! There’s a lot at stake: whoever finds the almond will be lucky in the next year. 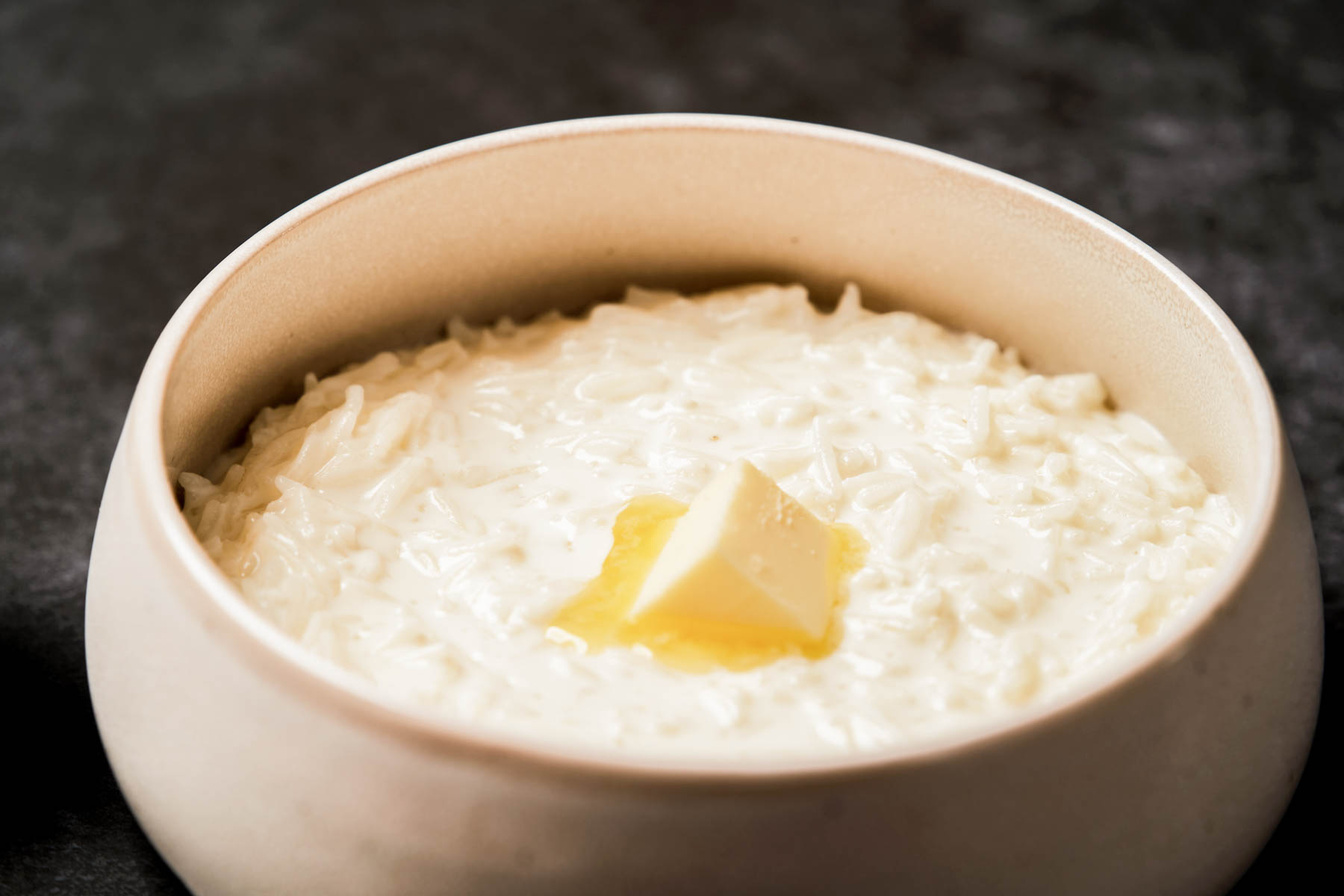 It’s an old Christian tradition to put war on hold during Christmas. This tradition was called “Christmas Peace” in Finland, and has been kept alive ever since the war.

At noon on Christmas Eve, peace is proclaimed with a ceremony in Turku, the former capital and oldest city in Finland.

Today, this event is symbolic and is largely watched on TV. It is for the older generation what Santa Clause’s Hotline is for the kids: a mark of stability and continuity.

The churches are never as full in Finland as they are on Christmas Eve. It’s both a chance to get to sing Christmas songs, and to bring candles to the graves of loved ones.

The Finns have a habit of cursing the short winter days, but this is the one night that darkness pays off; cemeteries light up in a beautiful sea of candles. 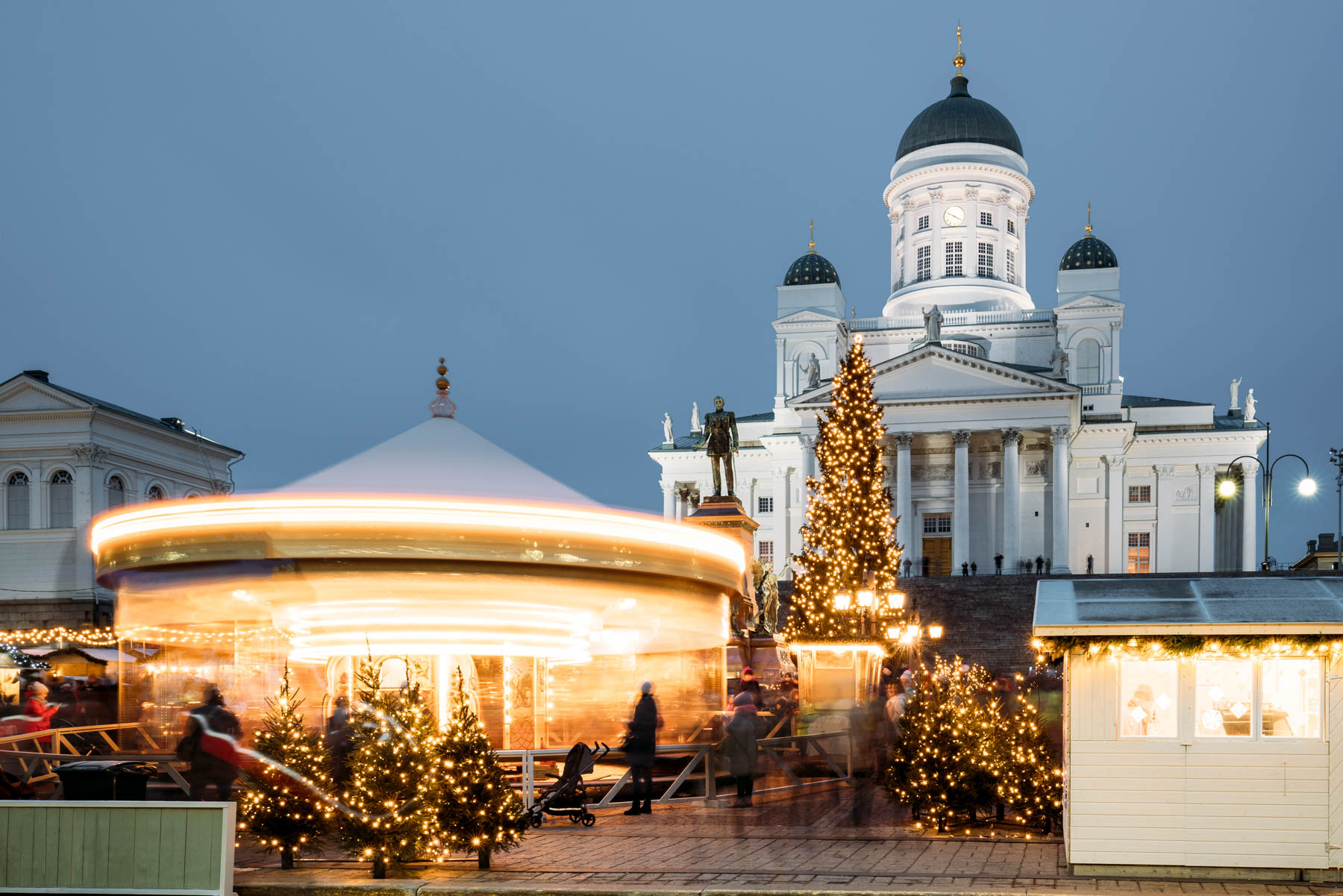 With all the traditions and to do lists, Christmas can feel overwhelming. The sauna, however, is a place for peace and quiet. For those who don’t go to church, the sauna can be their own version of a holy space, where you have time to be present and enjoy the heat. Taking time to rinse the season’s stress away is deep rooted in the Finnish holiday traditions.

Preparing for dinner is a major job if you plan to include all the traditional treats. The cooking usually starts in the morning, and goes on all day. Gingerbread and Christmas tart are made in advance, because the ham and the casseroles in the oven don’t leave room for much else. 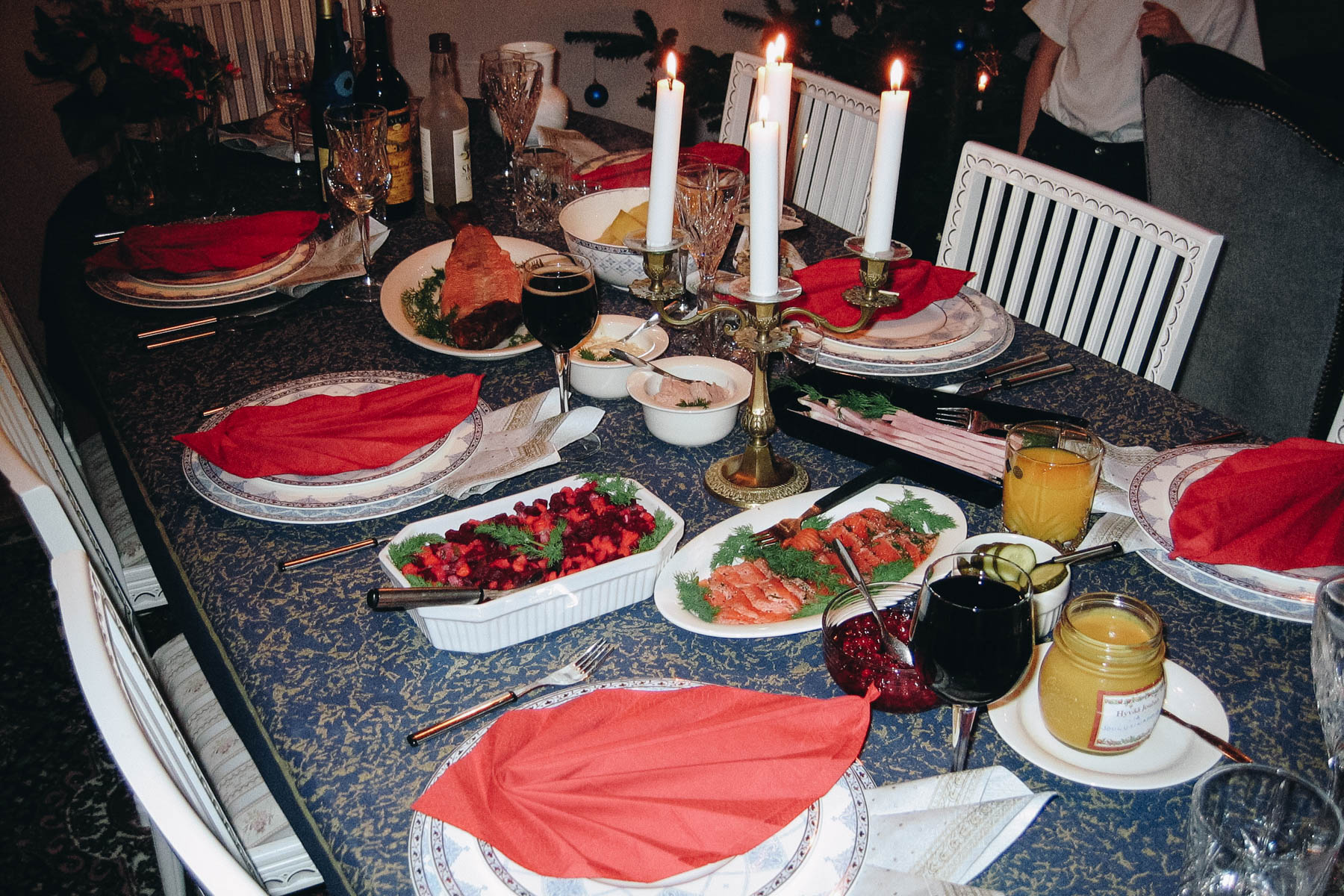 The main dish on Christmas Eve is joulukinkku, baked ham. Coated with mustard and breadcrumb, the ham is served with potato and casserole. The ham is usually big enough to eat for many days afterwards.

Rosolli is a beetroot salad and is usually served with apple, onion, potato, and carrot. Rosolli has a deep pink color from the beetroot and is a beautiful feature on the Christmas plate.

Casserole at the Finnish Christmas table are as old as time itself. Even though Finns eat casseroles all year round (macaroni, liver, kale…), Christmas has its own flavors. Mashed root casseroles are generally divided into three main dishes; potato, carrot, and rutabaga.

Fish and ham on the same plate might confuse some, but not Finns. On Christmas, herring is a classic. It comes pickled in all sorts of different flavors, including mustard, dill, and ginger. The delicious salmon also comes smoked, cured, or baked.

The big highlight of Christmas Eve is a knock on the door and that fateful question: “Are there any well-behaved children here?” After the children answer (it’s always an emphatic yes), Santa Claus can enter the house with his huge sack of gifts.

The traditions vary from home to home, but usually kids sing to Santa, and chat for a short while. Then: the gifts! Santa reaches into his big bag for one at a time and reads the recipient’s name. If he’s in a hurry, which he might be since it’s a fairly busy night for him, he might ask for a helper in the family to distribute the gifts.

When the gifts have been handed out, they’re opened. The rest of the evening is lots of fun, while everyone enjoys with their gifts. Change to your pyjamas, put on a movie, and eat the leftover sweets; the relaxing is perhaps the most beloved tradition of all! 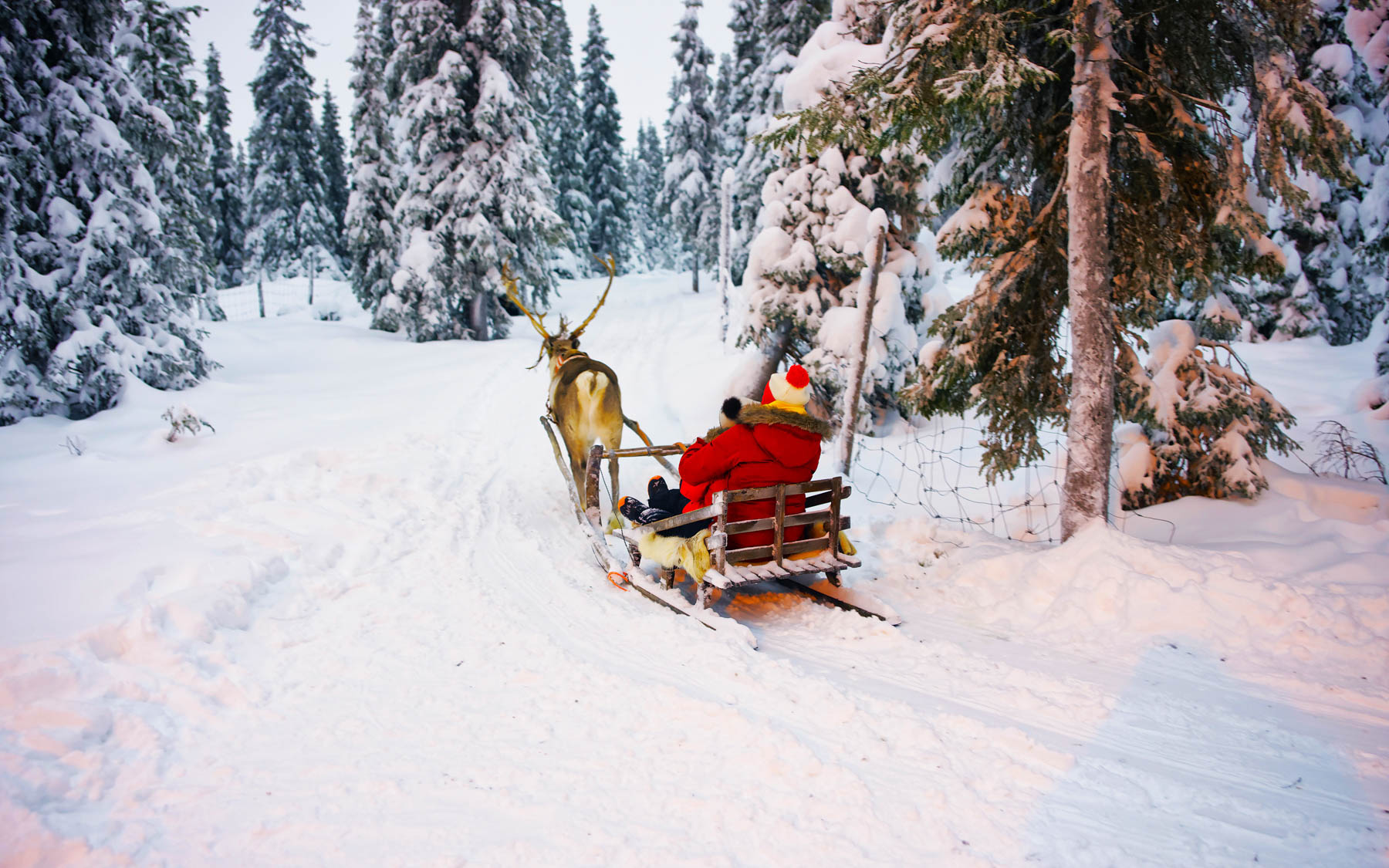 When does Santa visit Finland?

Santa visits on Christmas Eve and gives out the presents, children open them shortly afterwards. This is different to the Anglo-tradition of having Santa visit during the night and opening the presents the next morning.