The conference table at Danish fashion brand Blanche’s HQ is set out with glasses and a big beautiful bottle of green liquid. It’s a fresh juice, something with vegetables, ginger, and spirulina, and it stings a little going down in the way that healthy things often do. “We got it from the cafe around the corner,” founder and Creative Director Mette Fredin explains. “It comes in plastic bottles, but we figured we should start taking our own glass bottles instead. If we want to be real about our sustainability policies, it needs to start at the office-level.”

Founder and Commercial Director Melissa Bech nods, “It’s also just not that hard to make a change like that.”

And therein lies the general philosophy of Blanche, a fashion brand launched in Copenhagen in 2017. Named Blanche as a reference to a clean slate (“blanche” is the feminine version of “white” in French), the brand is a testament to how to be both cool and ethical, while growing at a steady but realistic pace.

“We wanted to make clothes that were still very fashionable, but with a better mindset,” says Melissa. 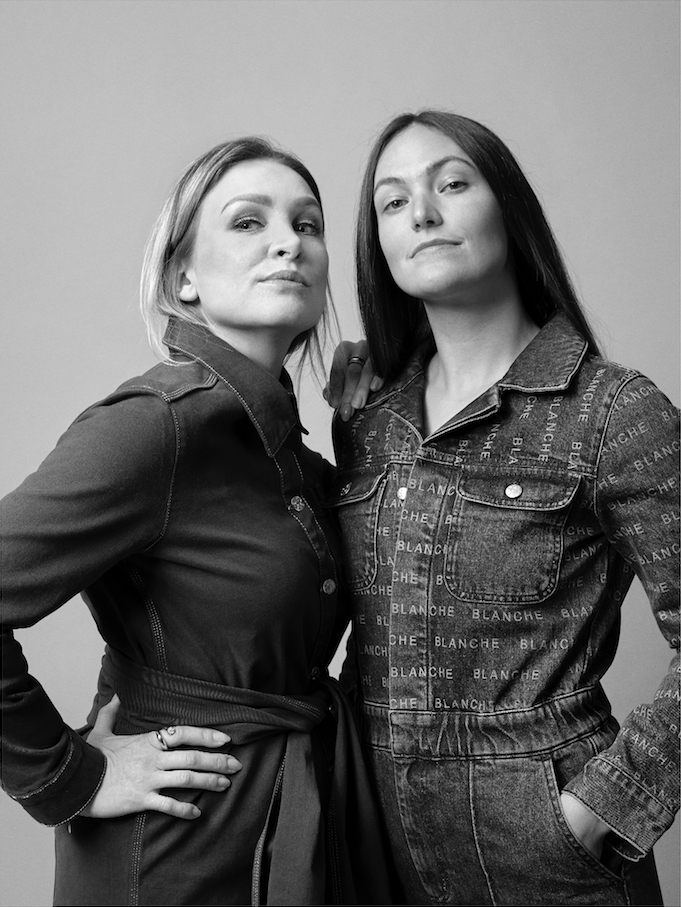 Because both women come from a fashion background – Melissa was the fashion editor at Cover magazine and Mette was Head of Design at Danish fashion brand 2nd Day – they knew the challenges that awaited them in starting their own brand. That’s why they brought an investor on immediately.

“It’s really expensive to start a fashion company!” says Melissa, “and we wanted an investor who offered an area of knowledge we didn’t have. Our investor has a lot of experience in logistics and things like shipping. That’s been extremely helpful for us.”

Once Melissa and Mette had their practical foundation and philosophy in order, they had to actually carry it out. “We’re aware that by creating anything, we can’t be 100% sustainable,” notes Mette, “but our goal is to model the way a fashion brand can be.”

To that end, Blanche’s sustainability policy extends beyond just “organic cotton,” (although it does include that!). They produce four small collections per year from two branches: Blanche and Blanche Atelier.

Blanche is made up of classic and timeless items, while Blanche Atelier is a bit more experimental. “It’s not exactly trend-based, but it’s a little bit more fun and quirky,” says Mette. “We’re not exactly marketing them to different target groups, but they do tend to be bought by different stores, so that’s the end result. We want to dress more than one type of person.” Both collections include denim, something that Blanche has come to be known for.

Blanche uses approximately 40% deadstock fabric throughout their collections, so the resulting production numbers are low. “When we buy deadstock, we get what we get. If we can only produce 70 pieces from the amount of fabric available, that’s what we do. It’s a great way to use fabric and it keeps the collections as environmentally-friendly as possible,” says Melissa.

In addition, their denim is Cradle to Cradle certified, a certification that takes into account material health, material reutilization, carbon management, water stewardship, and social responsibility.

When asked what “sustainability” really means to them, they consider. “It is a buzzword at the moment!” exclaims Mette.

“But it’s not meaningless to us. For us it means less harmful impact. Less chemicals, less transportation, less production. Being honest about pricing. And it’s not just the clothes; it’s the office itself. Providing vegetarian meals and fair trade coffee, recycling. It’s really a top to bottom thing for us,” she says.

Almost immediately upon their launch, Blanche began showing at Copenhagen Fashion Week and has continued to do so. “It was important for us to use that platform and really integrate into the Copenhagen fashion scene,” Melissa says, “because our overall growth strategy has been slow and steady.

“If I’ve learned one thing since we started, it’s focus. Don’t try to do too many things at once, and be honest about what will actually benefit you. We’ve had wonderful triumphs with the brand, but also our fair share of setbacks, and those are almost always the result of trying to do too much at once.”

“We’re only four people full time in the office – we need to be careful where we put our energy! I spend about 80% of my time dealing with logistics and if I’ve taken on too much, the important things simply won’t get done. That’s not an acceptable way to run a business.”

That slow-and-steady framework is really starting to payoff, with 2020 already looking like a major year for the Blanche team. They’re currently selling in eight countries with more on the horizon, and they’re now available in massive British retailer Selfridges.

Blanche is compelling on multiple levels. On the surface, their Copenhagen-cool style makes is well-placed within the current fashion market, both effortless and wearable. But dig deeper and you see that there’s more to the brand than the aesthetic. They’re making considered objects that will last, both in quality and design.

Fashion desperately needs a clean slate and Blanche has found a way to offer it, without making you feel like you’re giving anything up.

Find out more about Blanche.