If someone told you about the time she foraged for chanterelles, ate the world’s best cheese, or sampled a cold-water seaweed that tasted of truffles, Norway might not even cross your mind. “Norwegians aren’t the type of people to shout it from the rooftops [but] Norway has some of the best ingredients in the world,” explains Nevada Berg, food blogger and author of the new cookbook North Wild Kitchen: Home Cooking from the Heart of Norway.

The events that brought the native of Utah, USA, to a small village in Norway’s medieval valley seem like a simple act of fate. “It had been 15 years since a student was placed in the UK,” Nevada recalls of her university study abroad application. “I had low expectations of getting in.” Much to her surprise, Nevada was accepted. And on the first day of orientation she met her Norwegian husband. “That was [also] the first time I had to step out of the comfort zone of the food I knew growing up. I had to let go. Instead of trying to recreate what I wanted, I learned what other people were eating, and why.”

Nevada started her blog North Wild Kitchen in 2015 shortly after swapping the lively streets of Rome for the quiet charm of a 17th century Norwegian farm. The New Nordic movement had been well underway but to Nevada, Norwegian cuisine was still being presented as heavy and bland.

“I knew that couldn’t be correct, so I gave myself a personal challenge to go and learn.” Nevada posted her first story – about two generations of Norwegian women making traditional lefse (flatbread) over a wood-burning stove – in December 2015. Two months later the accompanying video went viral. “There’s a lovely balance, presenting recipes and sharing the history behind them. It shows how important it is to look beyond what we’re eating.”

That same year, the gourmet magazine Saveur named North Wild Kitchen their 2016 Blog of the Year. “I think I said, ‘Are you sure?’ ” Nevada laughs. “It was an exciting moment! And a chance to keep showing that Norway is as important culinarily as anywhere else.”

Much like her blog, Nevada’s debut cookbook shares more than recipes. The book is a visual story of Norwegian traditions with each chapter centered on a different element of Norwegian food culture. “When you put out a cookbook, you put so much energy into it. [Then] a year goes by, and a year and half. Things change. You change. [You] hope that when the book comes out it’s where it needs to be because you’re in a different place,” Nevada notes.

But the celebrated food blogger couldn’t be happier with her first cookbook. And judging by the books growing acclaim – which includes a recent nod in the New York Times – Nevada’s culinary labor of love is exactly where it needs to be.

What to bake like Nevada Berg? Try her cinnamon bun recipe!

Skillingsboller get their name from an old custom of naming baked goods after their price. They used to cost a skilling apiece though that’s certainly not true anymore. It’s said that skillingsboller originally contained raisins, but after the war, raisins were difficult to obtain and the buns were sold without them. I like to add rye flour to my version. It gives the buns a bit more texture and depth, which I think complements the sweetness perfectly. 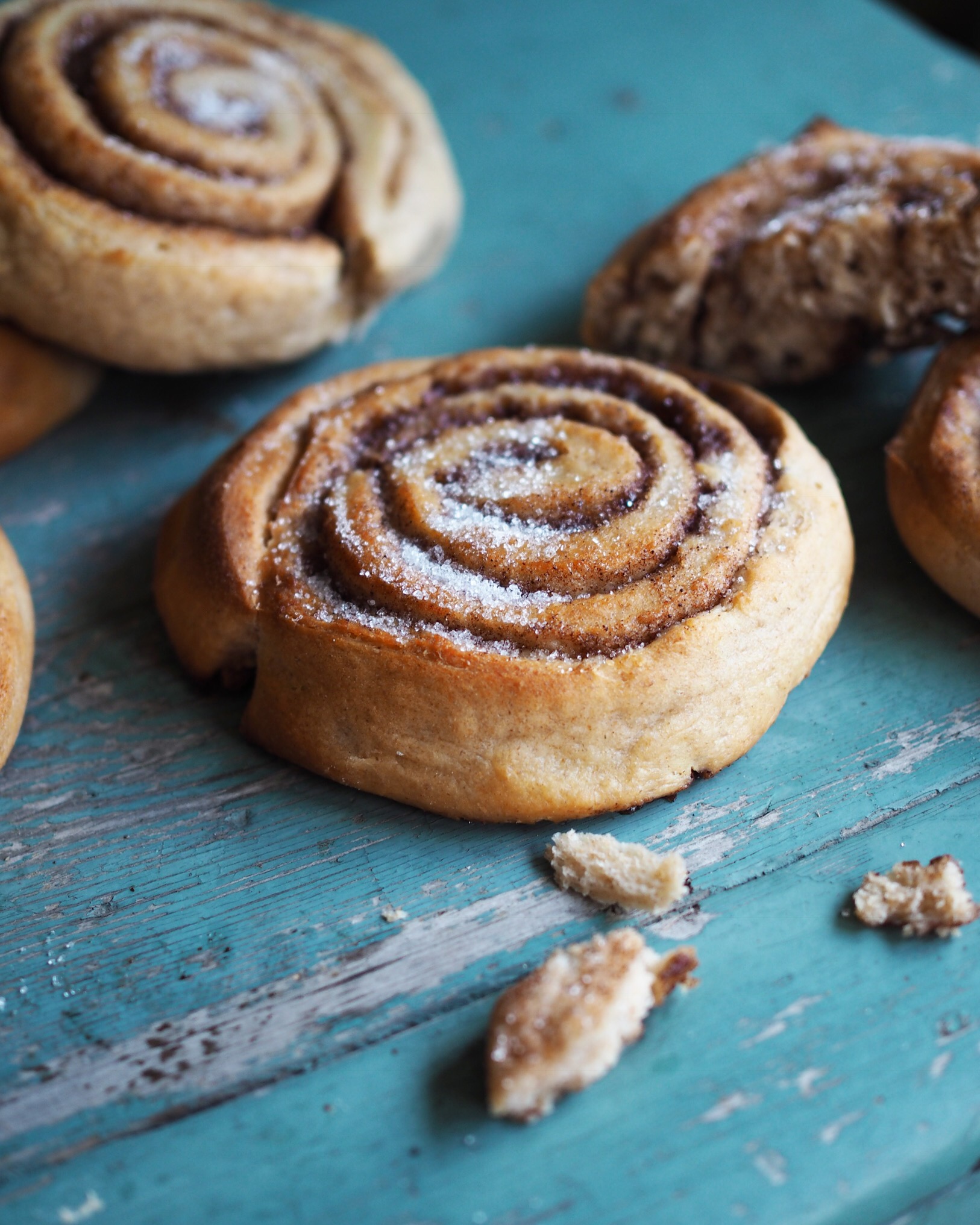 Ingredients for the dough

Ingredients for the filling

For the buns, in a small saucepan, melt the butter over medium heat. Add the milk and heat until lukewarm. Pour into the bowl of a stand mixer fitted with the dough hook attachment. Add the all-purpose and rye flours, sugar, yeast, and salt. Knead on medium-low for 8 minutes or until soft and elastic. Transfer the dough to a lightly buttered bowl, cover with a tea towel, and let rise in a warm spot for 1 hour or until doubled in size.

For the filling, in a small bowl, combine the butter, sugar, and cinnamon.

On a lightly floured surface, use a rolling pin to roll out the dough into a large rectangle that measures roughly 18 x 24 inches (45 x 60 cm). Using a rubber spatula, spread the filling evenly across the dough all the way to the edges. Roll the long side of the dough around the filling, forming a long, roughly 24-inch (60 cm) log. Using a sharp knife, cut the log into 20 equal-size buns. Divide the buns between the 2 prepared baking sheets, cover with a tea towel, and let rise for 40 minutes.

Preheat the oven to 425°F (220°C) on the convection setting, Line 2 baking sheets with parchment paper.

Bake for 10 minutes or until nicely browned. Transfer to a wire rack to cool. Sprinkle the buns with sugar and serve. Store leftovers in a resealable plastic bag at room temperature for up to 2 days.

Get more recipes in Nevada’s cookbook, North Wild Kitchen: Home Cooking from the Heart of Norway