There are many seemingly insurmountable goals that we make for ourselves when we first move to a new city: learn the language fluently in six months, find an amazing job, run regularly. While those first two goals can be a struggle, the last one is within your grasp. Right now. You heard me; lace up your sneakers and get ready for the best Copenhagen running routes.

These routes are engaging, allowing us to focus less on whatever cardiovascular grief we might be enduring. I’ve found that the city’s varied terrain prevents boredom and keeps me truckin’! Running atop star-shaped ramparts? Yes please! Views of elephants, mermaids and giraffes? Bring it on! Plus, Copenhagen’s status as one of the flattest capitals in the world is blessedly appealing to hill-avoiders like myself. Here we go!

This run begins and ends in Nyhavn, specifically at a waffle shop called ‘Vaffelbageren’ for emergency post-run reasons. Head straight towards Amalienborg Palace, where you can wave hello to the palace guards. If you are particularly keen for a chat with them just run on the sidewalk and they will promptly tell you to get off. Expert tip: I don’t recommend doing this! 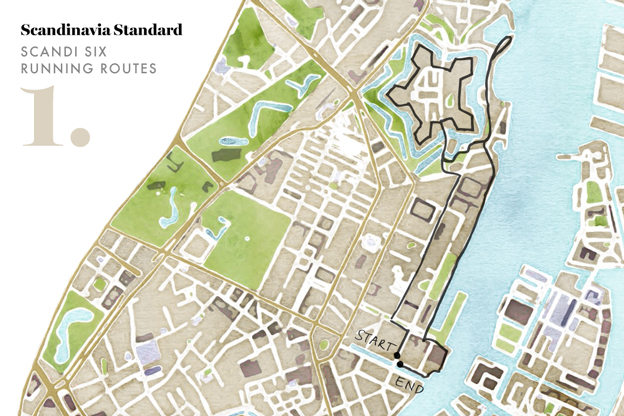 At Esplanaden, turn left and then right towards Kastellet, a star shaped fortress that you can run atop. I use this opportunity to embarrass myself and do some running drills on the twenty-five straights of the fortification. Options include: knee-highs, scissor-kicks, side-skips, funny walks, shimmy-jump-hops and of course a sprint. Before you know it, you will be absurdly dizzy, so just make sure you go all the way around and don’t exit half way.

Once you’ve completed the star, cross back over the bridges and turn left along the moat, past St. Alban’s Anglican Church and The Gefion Fountain. Veer to the left and you are on your way to see Denmark’s other first lady, The Little Mermaid. Then it’s time to head back to Nyhavn with a pleasant run along the water and with a terrific view of the Royal Danish Playhouse along the way.

This run begins in one of my favourite kinda-secret paths in Copenhagen, up on the old fortifications of the city. This lush green path is a perfect location to stretch. Run atop the fortifications for one bastion, then head down to the street on the left. 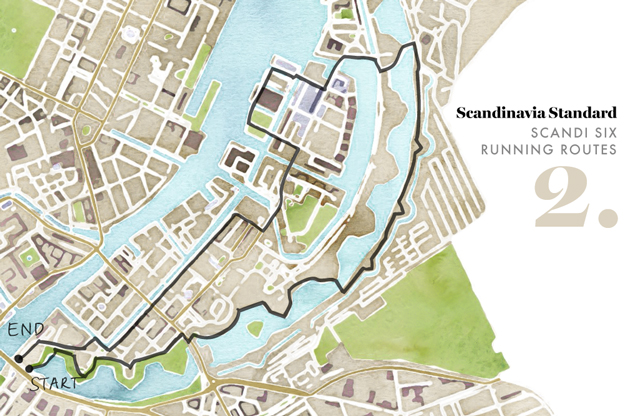 Turn left at Amagergade. This is a special street in Danish popular culture; the location of long-running Danish TV show ‘Huset på Christianshavn’. At the main road, Torvegade, cross the street at the pedestrian crossing on your right, then continue straight and follow the path along the waters edge. You will soon enter Freetown Christiania and the smell of weed will waft to your nostrils. Seriously.

Follow the water along the old ramparts, crossing a bridge halfway along. When you reach the main road, you’ve come to what I call ‘tricky turn of the day’! Turn left when you reach the road, then turn left again (you will see a sign that directs you to Operaen). Continue on this main road in the direction of the bronze dome visible in the distance.

The main road becomes a bridge on your left. Cross it then take the first right turn at Fabrikmestervej. You are now running toward The Copenhagen Opera House. Run around the stunning waterfront then head inland and back in again at Bodenhoffs Plads. This part of the journey will be simplified when several new bridges are built in the area.

The rest of the run takes you through the heart of Christianshavn, back to the starting point. By this time I’m usually pretty exhausted but having a lot of people around is fantastic motivation to keep running.

Begin this run at Kastrup Sea Baths (a.k.a. Sneglen : The Snail). This is a simple run that follows the water’s edge of Amagerstrandpark up to Amager Helgoland. The course then heads inland to follow what was previously the main beach of Kastrup before the island was created in 2005. 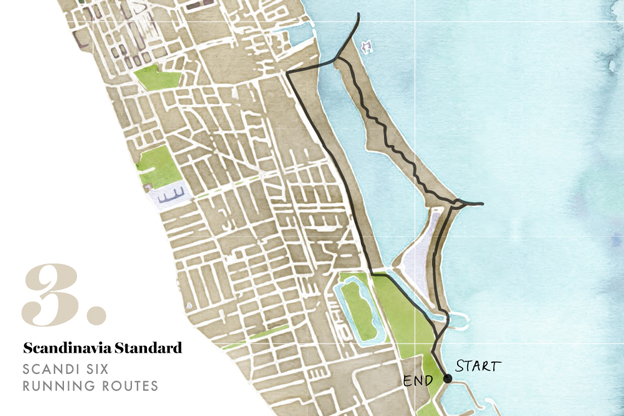 There are many great places to cool off when you’re through. Take a dip at the beach, jump from the highest diving board at Sneglen, or my personal favourite: a small, private swimming bath between Kastrup Havn and The Blue Planet aquarium.

This is my favourite Copenhagen running route. I’ve run it so many times while listening to audio books that now different corners of the park remind me of different stories; from ‘Master and Margarita’ to ‘Brave New World’ – eek! 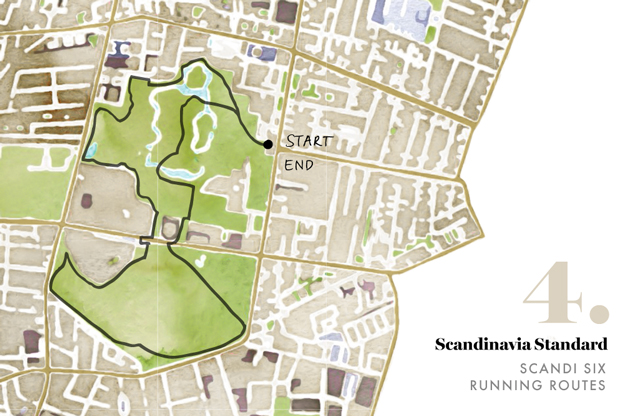 It’s best to run this route clockwise to enjoy the view across the lawn to Frederiksberg Castle. When you enter the park from Frederiksberg Runddel, take the right path, then your second left. Unfortunately there is no signage on the course to tell you where to turn left here. Continuing straight, you’ll run past the Sattetrae, a tree where children bid farewell to their pacifiers. The lower branches are covered with colourful dummies, greetings and short stories. Make your way over a bridge. Here you’ll see a pull ferry on the right, which crosses to an island on lake. It’s incredibly quaint.

Run towards the castle. Getting lost is optional, sometimes inevitable. Pass to the left of the castle, then up the hill to cross Roskildevej (carefully!). Here is Søndermarket where you run down the double-lane path to the left and continue around the perimeter of the park. Finish the loop and head back over to Frederiksberg Have again.

Continue along the perimeter of the park, past the neo-classical Apis Temple from 1804 and the Swiss House, where Frederick VI enjoyed a cup of coffee in the house on the hill. The route runs next to the elephant enclosure; there is only a pool of water between you and the elephants in the zoo! Last, a quick tour of the rose garden, majestic weeping willows dipping in the lake, and a glimpse into a heron colony. It’s just heavenly.

There are many reasons why The Copenhagen Lakes are one of the city’s most popular running routes. It’s simple and stunning. All day long you can spot runners logging miles along this 6 km stretch. 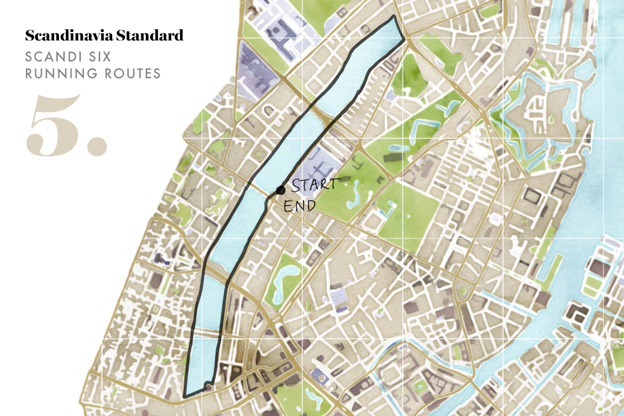 It’s too self-evident to describe: just follow the path around the three lakes (apparently there’s three, not five, two of them have bridges). When you reach the finish line, feel free to indulge in a Rocky moment and head up one of the knolls at the beginning of Nørrebrogade. There’s probably people cruising past on bikes but who cares? You just ran the 6.3km around the lakes!

I’ve always liked the idea of walking around this park, in the footsteps of Werner Heisenberg and Niels Bohr. The Niels Bohr Institute is just on the park’s perimeter and apparently the two physicists would frequently take longs walks together in the park. 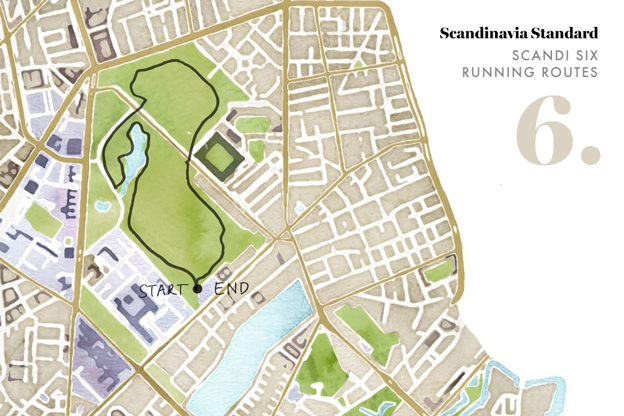 This is a simple run around the perimeter with a shape that bears an uncanny resemblance to Dr Zoidberg. This is a popular spot for Copenhageners and running groups. In fact, there are often free timed 5km runs in the park. If you’re going to be a fantastic runner, you might as well find out just how fantastic!

If you are an elite runner and these runs aren’t long enough for you (wow, lucky you!), remember: many of these runs can easily be combined into one uber-run of epic proportions. Good luck!

Where do you like to run? Let us know what we’ve missed!