In 1995 – that’s 20 years ago, apparently – Dogme 95 became the buzzy phrase that heralded an alternative approach to filmmaking and gave contemporary Danish cinema unexpected international fame. The Dogme 95 manifesto was created as a reaction to everything that two young Danes hated about modern cinema. Lars Von Trier, the acclaimed director of “Breaking the Waves,” and his friend Thomas Vinterberg, a promising young director, drew up a plan in just 45 minutes, fuelled by their fearless desire to discover new expression in cinematic narratives.

What was the plan? Here’s a list of rules: 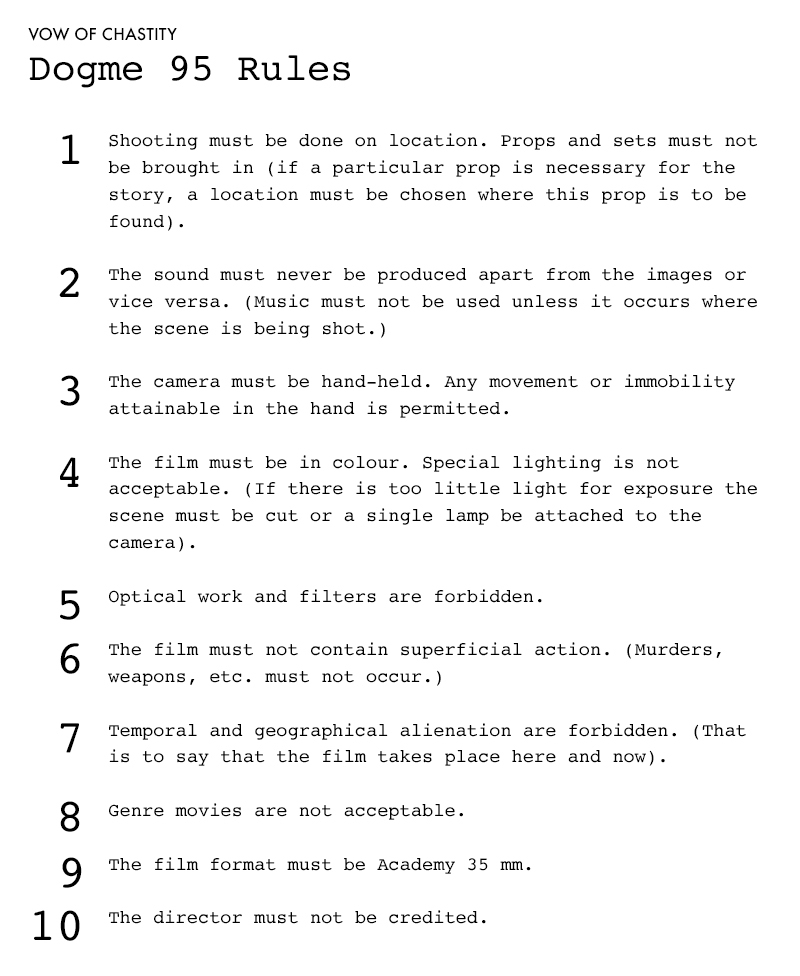 But why? The Dogme 95 manifesto was a call for a minimalist approach to filmmaking to express raw reality; something that they felt films in the newly-born digital age where failing to achieve. It was genius in its simplicity: focus on story, acting, and theme. They believed that this approach would better engage the audience and lead to less alienation due to overproduction.

Whether or not these films achieved this is another question. No enhanced lighting, shaky handheld cameras, distorted images? What are these films: masterpieces or messes? You decide! Here are the six that I consider to be the best Dogme 95 films:

In this bourgeoisie tragedy, family and friends gather at a manor house for the 60th birthday party of the patriarch. The eldest son gives a speech during dinner, revealing why his twin sister committed suicide. The film is a sinister black comedy that follows each character’s attempt to grasp the truth, as we follow the events with the tireless probing of the handheld camera. The film is deeply moving, made more so by the incorporation of the Dogme principles. The film certainly deserved the Jury Prize in Cannes, and the 12 other international prizes it received. Von Trier has said he let Thomas Vinterberg (the director of Festen) create the first Dogme film because he was the youngest of the group.

Lars Von Trier serves up a provocative piece with his trademark intellectual acuity, satirical bite and perversion. A woman in crisis joins a group of young people spending a summer of communal living and experimentation, as they pretend to be mentally challenged, confronting the normal world to find their “inner idiots.” This film is probably more controversial to people that live outside of Denmark. Once you’ve lived in Denmark for a few years, you become used to regular displays of public nudity and flippant rejection of “political correctness.” Like Von Trier once said: “a film should be like a stone in your shoe. It should make you uncomfortable and make you think.” Love him or hate him, Von Trier is an innovative film auteur who challenges his audience emotionally and artistically.

Yes. If you didn’t know this already: Harmy Korine DID create a Dogme 95 film. It was the first American film of Dogme 95 movement. Chloë Savigny fans rejoice! The film uses expressive miniDV video cinematography and dramatically cutting performances to capture the tale of a young undiagnosed schizophrenic man, Julien. In the hands of Korine, the film is compassionate and understanding, rather than being as abrasive as one expects from the opening sequence. The cinematography of the field scene is pure art (check it out at 1:05 in the trailer), like much of the film.

In Susanne Bier’s Open Hearts, a woman runs over a young man with her car. Left a paraplegic, he rejects the love and care of his girlfriend, who in turn seeks comfort from his doctor – none other than the driver’s husband. You might need to re-read that. Bizarre love triangle at it’s best. A perfect films for Mads Mikkelsen fans and a great introduction to Dogme 95 for newbies due to its accessible storyline. Bring tissues.

Lone Scherfig’s Italian for Beginners is about a group of suburbanites who come together at an evening school class: a waiter and a waitress, a minister, a pastry chef, a cafeteria manager and a ladies’ hairdresser –
all lonely and looking for love. This film is a rare treat; one of those films where the company of each character is a pleasure to have. Expert tip: this film regularly shows at the Cinemateket in Copenhagen.

This was the very first Dogme 95 film I saw and my personal favourite. I saw this with my Grandma at her retirement home and it was one of her favourites too! We picked it up at Blockbuster because we thought it was time to get in touch with my Danish roots. In retrospect, watching a film about a Danish prostitute escaping her past is a rather quirky way of doing this. This film stands out with the audience and critics alike among all Dogme films; it even won the Silver Bear at the Berlin International Film Festival. The story is about successful young businessman who’s called back to the ramshackle family farm. He decides to stay and take care of his mentally challenged brother. Roger Ebert referred to the film as the “most fun and the least dogmatic” of the Dogme films; I completely agree.

If you’re a serious aficionado of art films, you would have seen more (and I dare say, you probably out-rank me on iCheckMovies). Tell us about your favourite Dogme 95 film below!