I wasn’t expecting to become so captivated with Eurovision. I’d occasionally seen Eurovision on television growing up but only at the semi-finals on Tuesday did I become a true convert. I might even consider chasing the competition around Europe in future. Seriously. I had the time of my life! We danced with Azerbaijanis, Swedes and Icelanders, we critiqued the vast array of dulcet voices and screeching cries, appraised outfits (not just of the performers), waved our flags and drank way too much champagne. It was a blast!

It’s an exciting time for Copenhagen as it hosts the annual Eurovision contest and thousands of fans descend upon Denmark’s capital for the week-long celebration of camp music, visual spectacles and avant-garde dance moves (I insist the dance moves ARE avant-garde!).

I discovered that there’s an extraordinary number of Australians that made a pilgrimage to Eurovision mecca, including avid fan Nick Sowden. He stood in front of us in the line, wearing a gorgeous aquamarine sequin shawl from Sportsgirl. In this oh-so small world that we live in, my companion Margaux quickly realised that she knew him from school. Nick happens to regularly host one of Australia’s largest Eurovision parties and is a self-proclaimed expert on the competition. Nick explained to me, a Eurovision newbie, this crucial piece of information:

Thirty-one countries compete in the semi-finals, but only twenty countries go through to compete in the final, along with ‘The Big Five’ (the five main sponsoring nations) plus Denmark as the host.

He then provided us with an entertaining run-down of the acts as we stood in line for the show. Each year, Nick makes a list of six best songs of each semi-final and the three best songs from the automatic qualifiers of the big five and host country. His observations were too good to keep to ourselves. Here’s what we learnt from Nick about the contestants this year:

The three best songs from the automatic qualifiers of the big five and host country Denmark:

Thank you Nick for this fantastic summary! We’re excited to see the results in the final on Saturday.

Ben Morris has created this fantastic map of all the contestants of the 2014 Eurovision Song Contest. Check out more illustrations of hisMini Pop Icons. 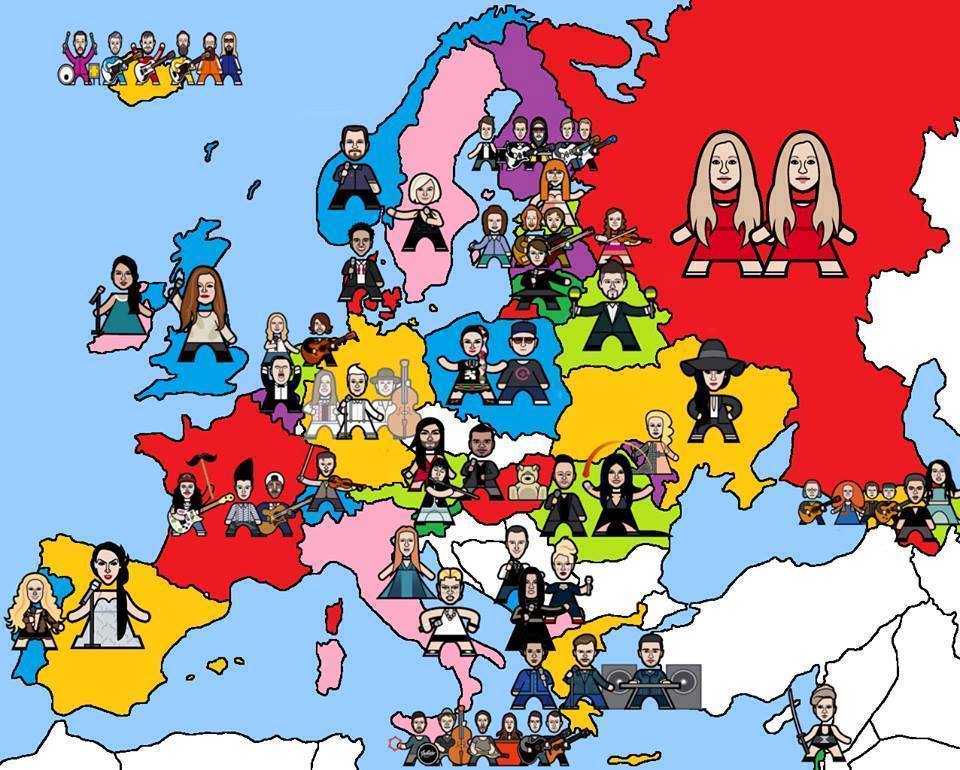