If you want to understand the Finns, first go to a Finnish sauna. These birch-lined steam houses have been central to the national identity for two thousand years. They’ve been used to heal the sick, for curing meat, and even as the site for childbirth. Saunas are so woven into the culture, that one was even erected for Finnish peacekeepers in Eritrea.

While saunas are popular around the world – thanks, in part, to Finnish athletes – there’s nothing quite like the original.

Here’s everything to know about Finnish sauna culture, including the history and the best sauna’s to visit in Helsinki:

History of the Finnish Sauna

In its primitive form, saunas were pits dug into slopes and heated with hot rocks. The entrance was covered, trapping the warm air inside so people could bathe in winter. While saunas do exist in other cultures, Finland has put the concept on the map – and into the English language: the word sauna is old Finnish and means “earth” or “snow pit.”

A more contemporary Finnish sauna was a wood house with a stove, called a kiuas, and a pile of stones, or kiuaskivet. The kiuas was wood burning and used birch to heat the room for long periods of time. Throwing water on the kiuaskivet increased the sauna’s humidity by creating steam or löyly. Finns believe that each sauna has its own löyly, and the better the steam, the better the sauna.

How is a Finnish sauna different from other saunas?

Given their shared history, Finnish saunas are similar to those in Estonia, Latvia, and Russia. Where they may differ is in their etiquette, architecture, or levels of humidity or steam.

A Finnish sauna is not like a Turkish hammam, which involves more of a bath-and-scrub-like ritual. It’s also nothing like a Japanese onsen, which involves a long soak in a natural hot spring.

Why do Finnish people use the sauna?

Over the ages, the sauna has served a multitude of functions for the Finnish people. For example, it was once called the “poor man’s” pharmacy, prompting the Finnish proverb “If liquor, tar, and sauna won’t help, an illness is fatal.”

Saunas were usually constructed first, which meant Finnish families lived in the room while the remainder of the house was built. In addition to women giving birth in saunas, the space was also used to prepare the dead for their final rites. Essentially, the sauna used to be the site where Finns both started and ended their lives.

Today, Finns use the sauna weekly to relax and connect with family and friends. Maybe that’s the secret to being the happiest people in the world!

Before entering a sauna in Finland, it’s important to know a bit about Finnish sauna rules. After all, the sauna is sacrosanct in Finland, and if you misbehave the sauna elf, or saunatonttu, will burn it down. The general rule is to conduct oneself as one would in a church; that is, be on your best behaviour. Don’t be loud, discuss controversial topics, or bring anything inside to eat or drink.

And while in traditional sauna culture it’s important to respect that people come to saunas to relax, private saunas can be a popular spot for drinking and chatting with friends, especially on a Friday night. In the sauna, people begin to relax and share what’s on their minds.

Don’t know the etiquette of a new sauna? Just go in and observe how others are behaving. If no one talks, then it probably isn’t a very chatty sauna space and it’s best to respect that.

Here are six more tips on what to do, and not do, in a Finnish sauna:

Shower before and after

Always take a warm shower before; it helps to keep the space (and yourself) squeaky clean. Plus, a soapy pre-wash removes dirt and oil from your skin making it easier to sweat. You’ll also want to take a cold shower after, to help “close” the pores and increase blood flow. Don’t skip it. This is what gives you that rejuvenated post-sauna glow that the Finns find irresistible.

It’s customary to wear a bathing suit in mixed-sex saunas, however, in same-sex saunas it is not. Context is everything. Generally, nudity is less of an issue for Scandinavians. Be prepared to get naked, but you can use a towel if you’re feeling a little shy.

Since heat rises, lying on the upper benches will give a hotter experience, as will keeping to the corners. If 80°C (175°F) is a bit too much, choose a seat on a lower bench. It’s Finnish custom that whoever sits near the water bucket, or kiulu, is in charge of throwing water on the hot rocks. So, if you’re worried about your löyly skills, sit farther away (or by the door for a quick escape).

Because it’s a communal space, check with others before changing the temperature or pouring water onto the rocks.

The general rule is: steam, cool, repeat! Each sauna session usually goes for 5 to 20 minutes. It isn’t a competition, just stay until you reach your limit, and leave immediately! Staying in a sauna too long can be dangerous.

To cool in between each sauna session, it’s common to jump into some freezing cold water. The heat from the sauna and a sudden cooling gives you an extreme rush of hormones like endorphin. Afterwards you feel light and happy. The bigger the change in the temperature, the stronger the effect is too.

However, there are risks involved with jumping into freezing water, especially to those with any cardiovascular problems. If you’re very keen, Finns recommend starting training for this in the summer months so that when winter arrives your body is more acclimatised. 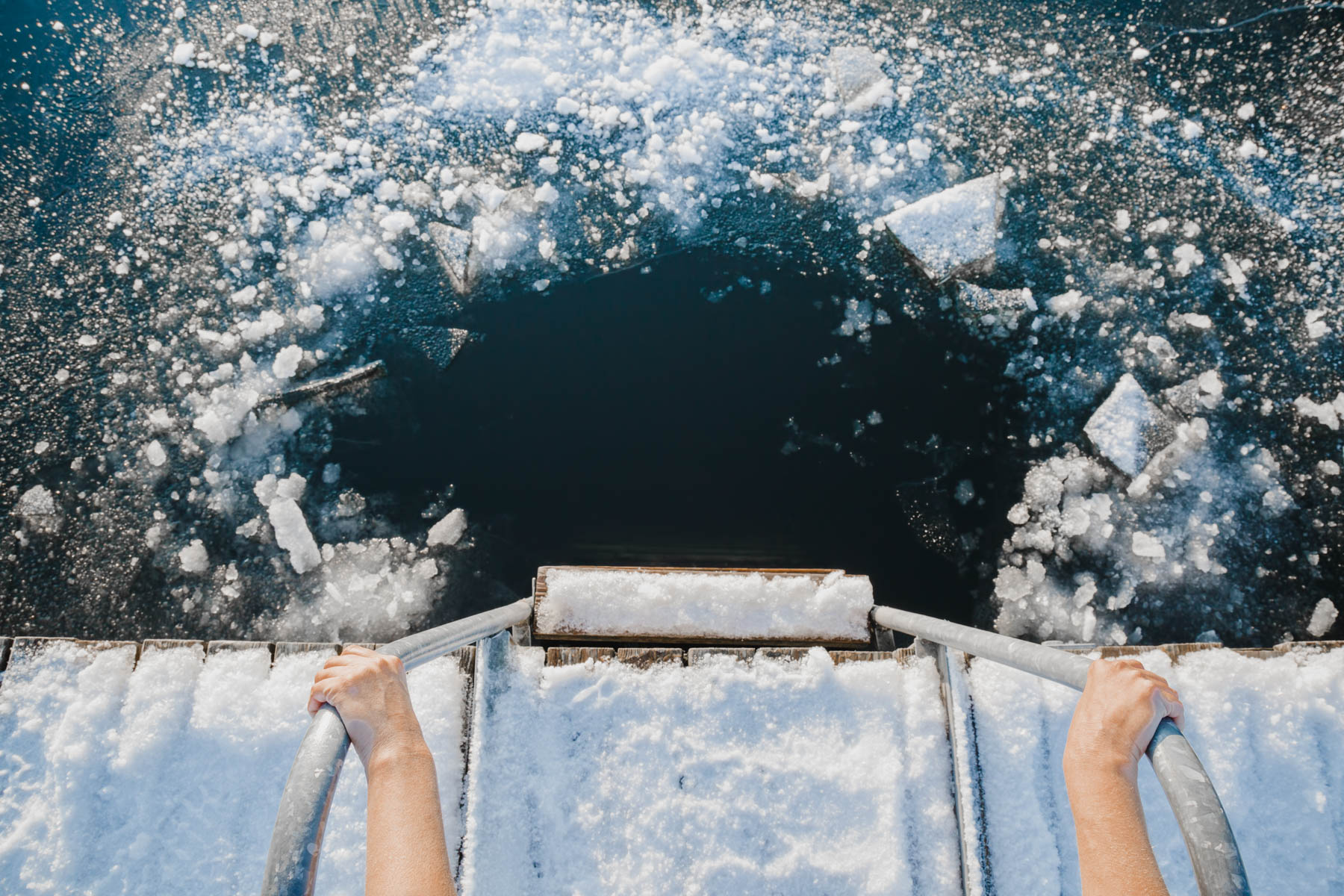 It’s better to maintain it or gaze at the view outside than let your eyes wonder. It’s rude to stare, and never has this saying been truer than in a sauna… Keep your eyes forward or at eye level, ogling is a big no no.

In Finland, sauna’ing is a social affair that should be enjoyed slowly. Finns don’t sweat and run; they have multiple steam sessions punctuated by a cold swim, shower or beers.

This is a common question. Some Finnish saunas are mixed-sex while others are not. In the case where saunas are mixed, bathers are required to wear swimming suits or towels, so don’t worry about being naked. Single-sex saunas have segregated spaces or designated hours for women and men, and in this case, you do wear your birthday suit. For perspective, Finnish families sauna naked together – as in everyone, from grandparents to tots as young as four months old.

What is a vasta?

When going to a sauna in Finland you may see or hear about a whipping ritual that includes a bunch of leaves. This refers to the vasta – also called a vihta – a bundle of fresh birch used inside the sauna, particularly in the spring. It’s believed that hitting yourself with it increases blood circulation and smoothes the skin. 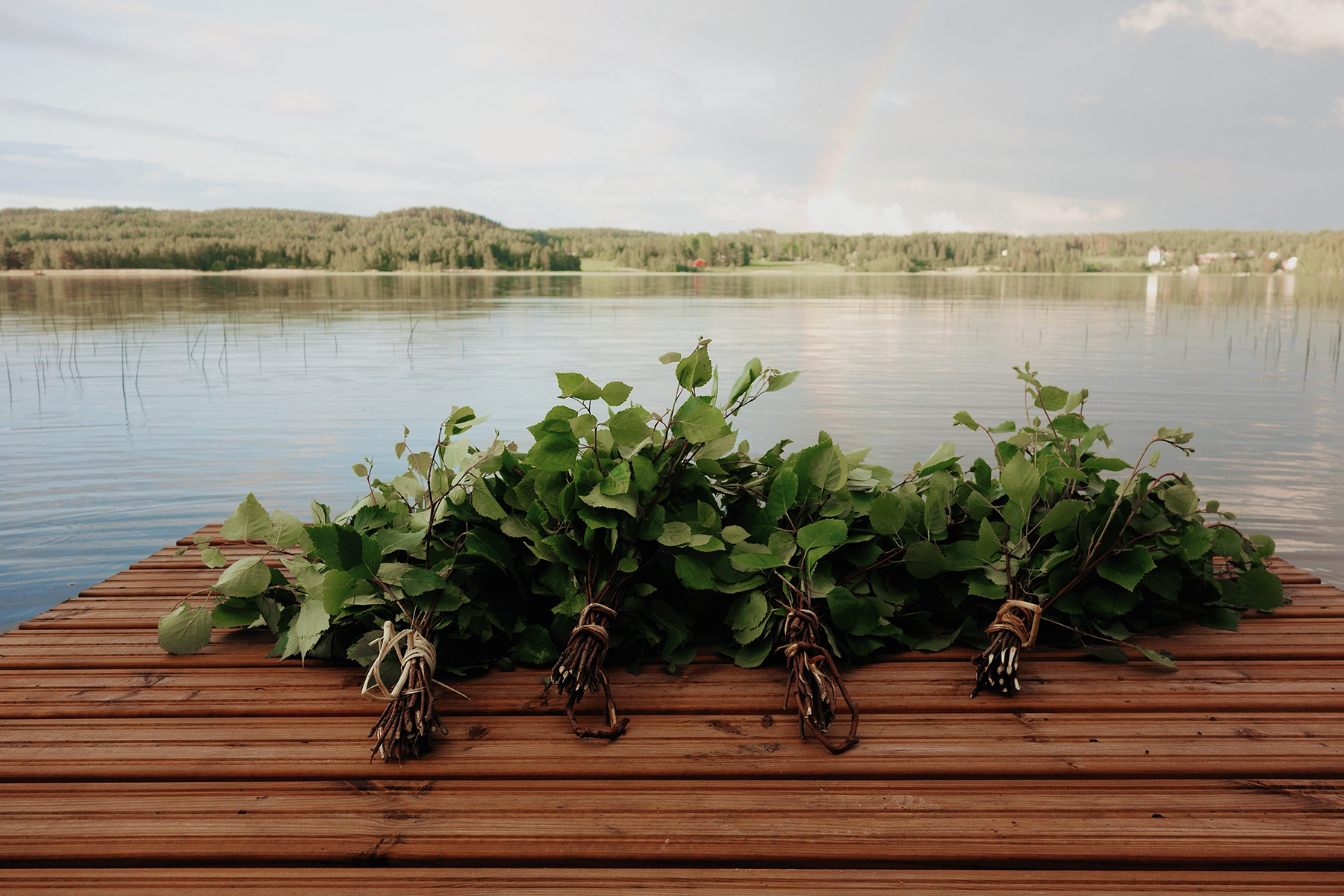 Does every house in Finland have a sauna?

It’s estimated that a third of the world’s – yes, the world’s – saunas are located in Finland, a stat that’s supported by the old Finnish saying “first build the sauna, then the house.” While saunas are so numerous in the Nordic nation that there’s roughly one sauna for every two Finns, not every house in Finland has a sauna, but the majority of them do.

Most detached houses in Finland have saunas, as do terrace rows, summerhouses, and winter cabins. Many apartment buildings have communal saunas, although more and more Finns are now installing a private one in their flats. Even large companies have saunas – businesses have been known to conduct networking sessions within the walled sudatory of this Finnish standard – and the Finnish prime minister and president both have their own official saunas.

Where to sauna in Helsinki

Unsurprisingly, the Finnish capital has an impressive selection of different types of saunas, ranging from the traditional to the world’s first Ferris wheel sauna. Here are six recommendations on the best public saunas in Helsinki:

Best for lovers of cool spaces and Scandinavian architecture

Opening Hours :
The SkySauna is scheduled to reopen in Spring 2020

Best for a rustic sauna experience in a log cabin

Best for a morning, seaside sauna on an island outside the city center