When they take off their beloved sneakers in favour of high heels, Scandinavians love a good block heel. It makes sense; function over form, easier for traversing all those charming cobbled streets in rain or shine, and more casual looking than their sharper stiletto sisters. Roccamore shoes is having none of it.

“Danes, and Scandinavians in general, often have quite a uniform look. But I think standing out is much more inspiring. I’m inspired by the geeks, the people who are super-passionate about something and show it. That’s how I feel about shoes,” says founder and designer Frederikke.

Having trained as a shoe designer in Italy, Frederikke went on to work with companies like Ferragamo and Shizatzy Chen before becoming Creative Director of Mermaid Shoes. “I was travelling up to 200 days per year and, even though I loved the creative aspect, I eventually needed a change,” she notes.

Frederikke and her husband moved back to her native Denmark in 2012, where she began a university degree that culminated in launching what is now Roccamore. She tells me,

“My aim with Roccamore was to create a comfortable high heel shoe that was designed in Denmark and made in Italy. My thinking has been very influenced by my time in Italy. Italians dress for the day first and think about comfort second. Danes are the opposite – they want comfort. So for me, creating a comfortable shoe that didn’t lose any of the style was important.

“I missed making shoes by hand, so I started hanging out in the workshop of an orthopaedic shoemaker. I realized that the way insoles were made for flat shoes – you could do that for high heels too. The owner of the shop had 15 years of experience and although he thought the idea was a little crazy, he would go back and forth with me until we’d found solutions as I developed these insoles. It was a long process but also very organic, and very much about finding a solution to what is a problem for a lot of women.”

Roccamore officially launched in 2014, aided by Kickstarter. Frederikke raise 330,000 Danish kroner; a clear sign that a chic high heel without the foot pain is in demand. Sourcing an appropriate factory proved to be the hardest part of the enterprise.

Frederikke explains, “I wanted a factory that wasn’t overproducing, that focused on craftsmanship and that I knew treated its workers well. Preferably a family-run business. The bottom line is that the making of shoes always involves people. The question is whether they’re doing it in an ethical way or not. After some searching in both Spain and then Italy, I found what I was looking for. The factory I use now is a multi-generational family factory that practices ‘slow fashion.’ They only work for me, Valentino Red and one other brand. That’s perfect for me because I produce two small collections per year.”

But there are two sides to sustainable and ethical production: the people involved and the materials used. Frederikke sources her leather from factories in Tuscany, all as byproducts from the meat industry. “Many people think that leather comes from animals bred just for that purpose, but actually 82% of leather is a byproduct of the meat industry.” As for her insoles, they’re patented and as a result need to be produced in a different factory than the shoes. They’re made in Spain from breathable latex and are 40% shock absorbent.

The shoes themselves come in an array of styles and heights, from basic black to lavender, from strappy pumps to Victorian-style lace-up booties. Each one is named after a woman who inspires Frederikke, many of whom are customers.

Being something of a high heel skeptic, I wasn’t convinced that any heel could prove comfortable enough to wear all day. I put a pair of Gaia heels to the test – and when I say test, I mean a day of cycling and walking on cobbled streets – and was proven wrong. I didn’t get the usual sharp twinges or dull pain in the ball of my foot, and I felt stable on my feet. Plus I had a little ego boost from a) being approximately one million feet tall and b) putting a swagger in my step.

For a shoe you can wear daily, the price point is reasonable: they range from 1900 to 2700 DKK (255 – 365 EUR). If you’re looking to make your professional wardrobe a bit more stylish and formal without sacrificing the comfort of your feet, legs and back in the process, start from the bottom-up with Roccamore. 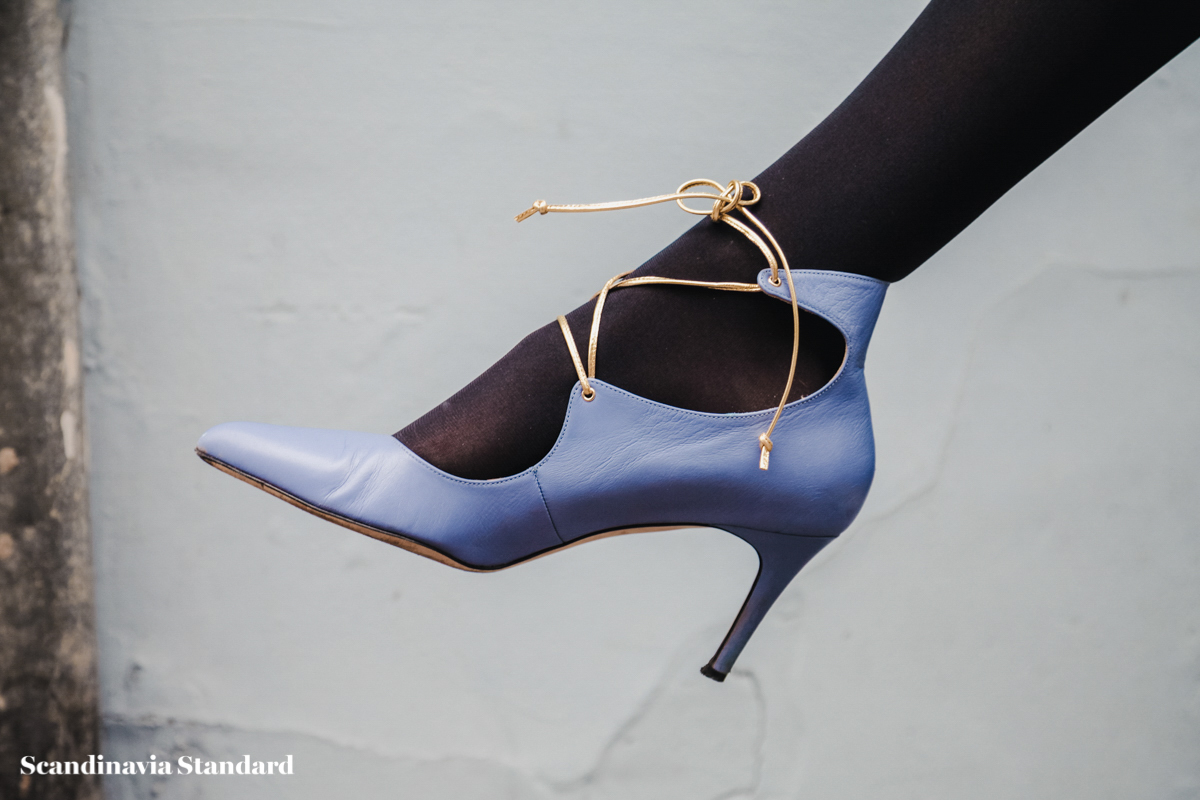