Scandinavians celebrate Midsummer in a variety of ways, but most celebrations include a bonfire and are outdoors. Midsummer is the longest day of the year, so Scandinavians are celebrating the long days of natural light, as well as the turning of the season; after Midsummer, the days become shorter.

There’s something special about Midsummer celebrations in Scandinavia; the bright light long into the night, the blue skies, the flowers, the food, and the joy. It takes you back to the Viking age with its elemental celebration of light and nature.

Traditionally, Midsummer was a pagan celebration of fertility and of light defeating darkness. That is still the backbone of Scandinavian Midsummer, and is evident in the method of celebration, including bonfires, feasts, and dancing.

When do Scandinavians celebrate Midsummer?

How do Scandinavians celebrate Midsummer?

Scandinavians celebrate Midsummer with bonfires, lots of food, and enjoying the outdoors. The bonfires, which are the most common form of celebration, are a pagan ritual to ward off evil that has lasted up to the present day.

Most Scandinavian Midsummer celebrations start the night before, on Midsummer’s Eve, also known as The Feast of Saint John. They then carry on into the next day, including lots of good food and (usually) drink such as traditional aquavit.

Why do Scandinavians celebrate Midsummer?

Scandinavians have been celebrating Midsummer since the Iron Age (during which time the Viking Age took place). The holiday, which has pagan roots, was used as a time to pray for abundant harvest. It was also celebrated fertility, light, and nature. Midsummer marks the “middle” of summer, the summer solstice, the longest day of the year between sunrise and sunset.

It is also a Christian holiday, with the Feast of Saint John. As Saint John was (purportedly) born on the 24th of June, Saint John’s Eve is celebrated on the 23rd. Saint John the Baptist was a forerunner to Jesus (and according to the Gospel of Luke, was actually related to him); he had his own disciples and in fact, still has a small sect of followers in Mandæism, mostly located in Iran and Iraq.

Midsummer was a national holiday until 1770, but it is still widely celebrated throughout the Scandinavian and Nordic countries, with Sweden’s celebrations being the most intense.

Want to know more about Midsummer by country? Here are all of the Scandinavian Midsummer traditions, including how each country celebrates the beloved holiday:

Swedish Midsummer, or Midsommar, is a big deal. Midsummer in Sweden is celebrated throughout the country, with many people leaving the cities and instead going to more pastoral areas to party in nature.

What do Swedes do for Midsummer?

Swedish Midsummer starts the night before, on Midsummer’s Eve. During the day, Swedes pick flowers to make flower crowns and decorate the Maypole.

The Maypole is a tall pole that is typically painted, wrapped with ribbons, and decorated with flowers. It is raised in an open area – usually a field or garden of some kind – and Swedes dance around it to celebrate the holiday.

Midsummer’s Eve is typically a large event with many people together. Because Swedes often use Midsummer as the first day of their summer holiday, this is a great time to get in all your social meetings in one go! Then you can relax at your coastal cabin, or whatever else you plan to do on your vacation.

The evening is believed to be a night for love. Legend has it that if a woman puts seven different flowers under her pillow before she goes to sleep on Midsummer’s Eve, she will dream of her future husband (no word as yet on the less hetero version of this myth, but why not give it a try?).

It is also believed that medicinal herbs are at their strongest on Midsummer, so many use this time to pick and preserve herbs and other medicinal plants.

There’s a long, leisurely dinner that includes traditional Swedish foods such as herring and potatoes.

On Midsummer’s Day, the party continues with the same food and drink, and time spent outdoors.

What do Swedes eat and drink for Midsummer?

The most important part of the Swedish Midsummer meal is the dinner on Midsummer’s Eve, which is long and full of traditional food and drink. Every table will have herring, boiled potatoes, and lots of aquavit.

Other things you’re sure to find at a Swedish Midsummer dinner are grilled fish (such as salmon) and a meat roast or rib of some kind. For dessert, you’re sure to see local strawberries with a hefty dose of cream. 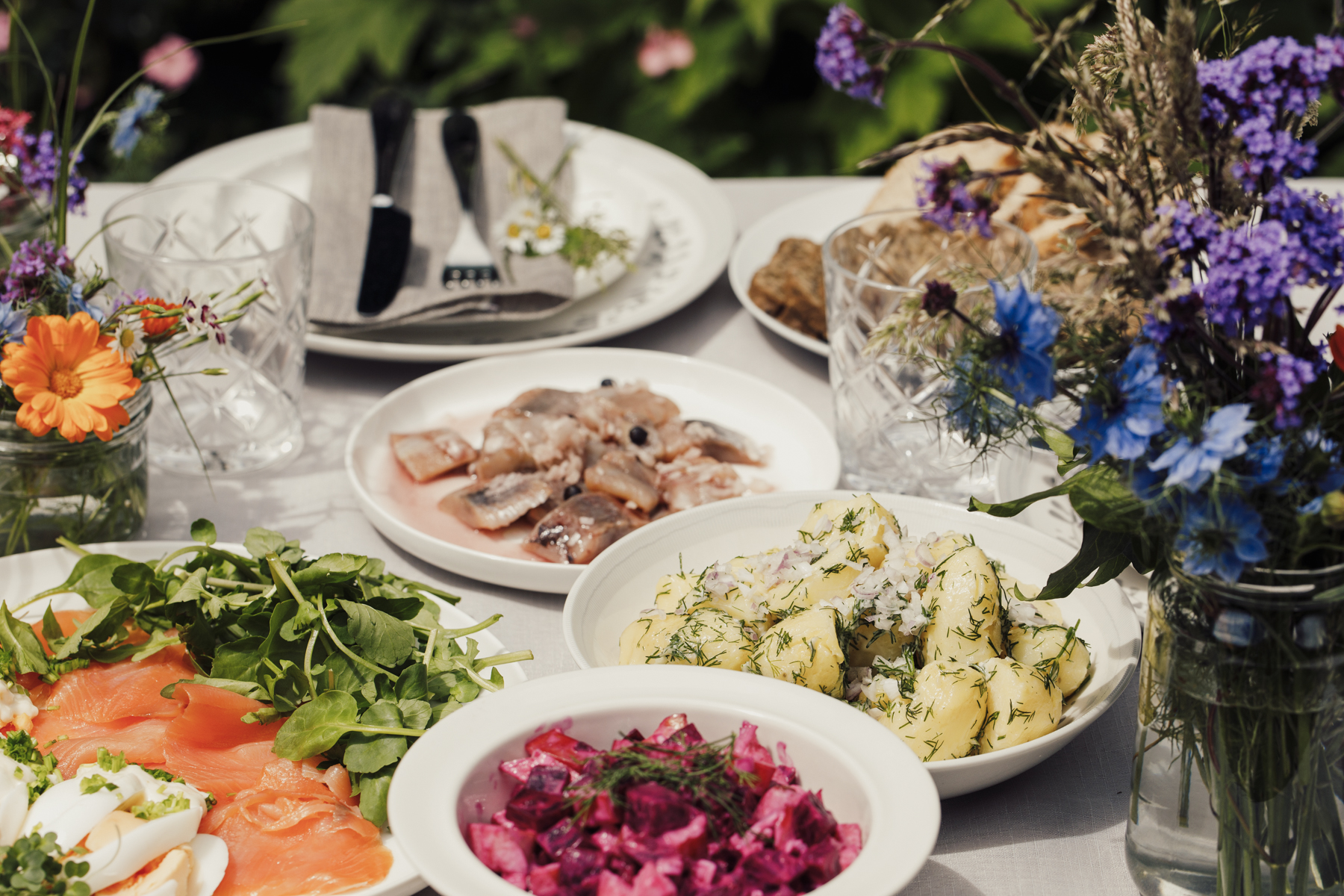 Danes celebrate Midsummer’s Eve on the 23rd of June every year. Called Sankt Hans Aften (St. John’s Night), the celebration is ostensibly in honor of the birthday of Saint John the Baptist, but shares more with the pagan traditions of Midsummer than with a Christian holiday.

The evening is marked with bonfires throughout the country, in both the large cities and small towns. Typically, there are speeches held at the the lighting of the bonfire, then songs. The most traditional is “Vi Elsker Vort Land” (We Love Our Country), written in 1885 by Holger Drachmann. 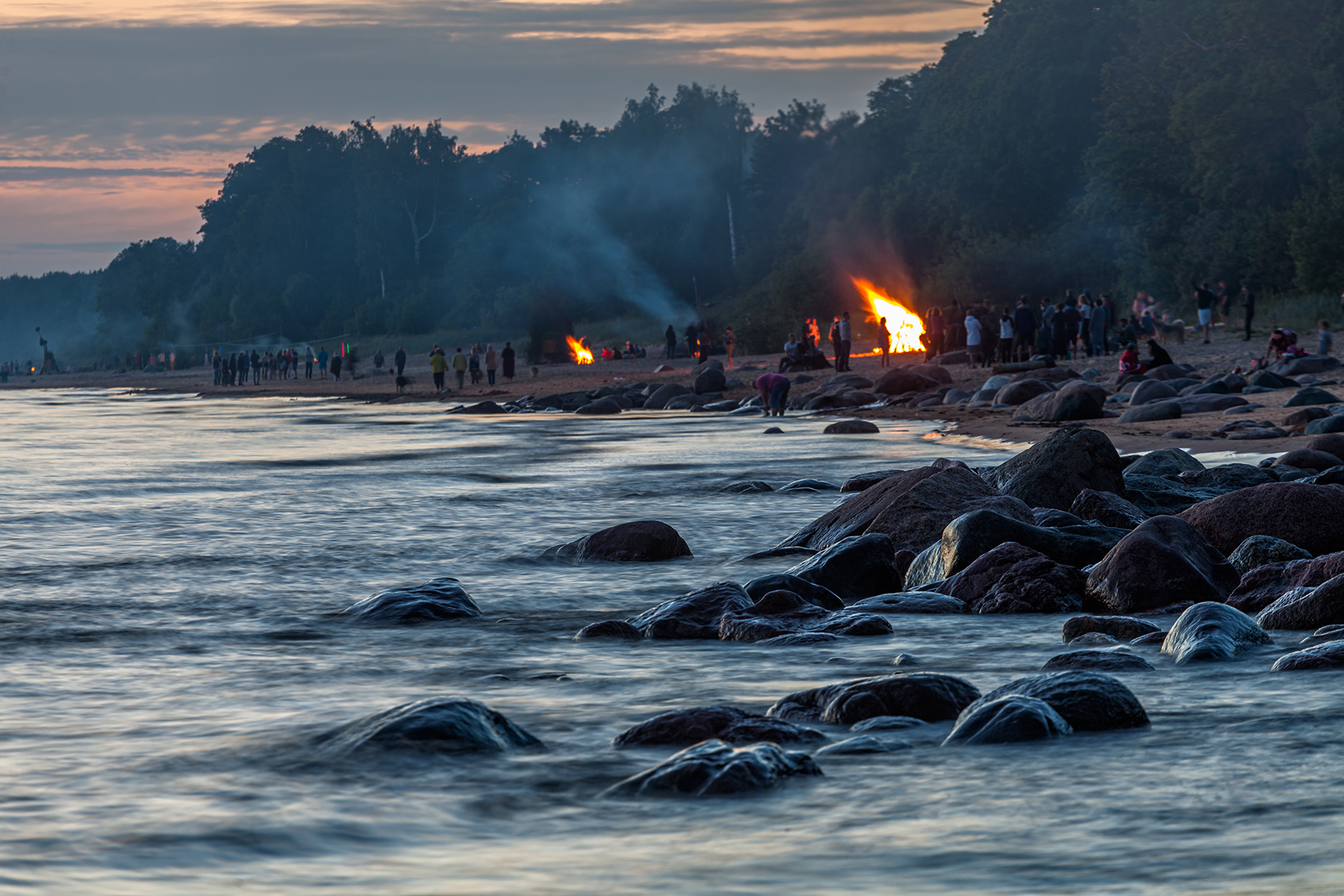 Why do Danes have bonfires on Midsummer?

Bonfires have been a way to celebrate Midsummer since the Viking age, when they were lit to ward off evil spirits for the coming harvest season.

In the 1920s, people began to include a straw witch on the bonfire as a throwback to the “witch-burnings” (let’s call them what they were: murders) of the 16th and 17th centuries. The legend is that when the witch is burnt, she flies to Bloksbjerg, Germany, where a witch-gathering is held. Many don’t like this tradition and instead skip the effigy.

The bonfires last long into the night, while friends and families enjoy nature on picnic blankets.

Similar to Denmark, Midsummer’s Eve in Norway is celebrated on the 23rd of June. It is called Sankt Hans Aften or Jonsok-kveld.

Though Midsummer is no longer a national holiday, it was until 1771, and some towns have retained the tradition.

Midsummer in northern Norway is really something special; between mid-May and mid-July, the sun doesn’t set at all, so Midsummer festivities last even longer than in other parts of the country and region.

What are the Midsummer traditions in the rest of the Nordic region? Let’s explore Finnish and Icelandic traditions too:

As with Denmark and Norway, Finland celebrates Midsummer, or Juhannus, with huge bonfires to ward off evil spirits.

In Finland, Juhannus is held on the 24th of June and is a national holiday, so many people take the time to leave the cities, take a sauna, and joy nature.

Some convenient myths you’re likely to hear? The louder the person is during Midsummer, the luckier they’ll be in the coming year. Similarly, the more a person drinks, the better the season’s harvest will be (so throw back those beers for a good cause, right?).

Icelandic Midsummer is rooted in Icelandic superstitions that are highly unique to the country. Myths you may hear in Iceland include that, during Midsummer, seals become human (also known as selkie folklore) and cows can speak. What a day!

There are no bonfires or other organised celebrations, but Icelandic people do tend to spend the day with loved ones, eat good food, and generally enjoy the longest day of the year.

Some attend the popular Secret Solstice festival, a three day music and culture festival that not only holds concerts but also creates once-in-a-lifetime experiences such as a rave in a glacier cave.

How do you say Midsummer in the Nordic languages?

Want to learn more about Scandinavian Midsummer? Find out about how the Danes celebrate and why the day is so important to the Swedes. Ready to celebrate yourself? Make a Midsummer flower crown!