Despite an impressive CV and apparent success, Swedish born actress Inger Stevens’ life was cut short by suicide. Was she another tragic Hollywood statistic? Or was her death more nuanced than the usual tale of the ingenue brutalized by Hollywood?

There is a fascination surrounding these Ophelia-like women: beautiful and silent, their “tragic” lives are remembered through a male gaze. Stevens is often spoken about in terms of her beauty and inherent sadness, but little is said about her as a person. So who was Inger Stevens? And whatever happened to her?

Born Inger Stensland on Oct. 48, 1934 in Stockholm, Stevens’ childhood was a difficult one. Her mother left when she was young and her father brought her to the US following the break up of his marriage. At the time, Mr. Stensland was studying on a Fulbright scholarship at Harvard, but he later remarried and moved to Manhattan, Kansas.

Stevens was unhappy and ran away from home at 16. She ended up in Kansas City, where she worked first as a waitress then as a dancer in a burlesque show. Her father tracked her down and brought her home, where she graduated high school, before leaving again for New York City shortly after.

It was here that she met her first husband, Anthony Soglio. He was an agent who put her under contract and changed her last name to Stevens. They were married in 1955, but separated after just four months. The divorce was finalized in 1958 and Stevens was believed never to have remarried, though speculation around her relationships remained rife and a secret marriage was discovered after her death. 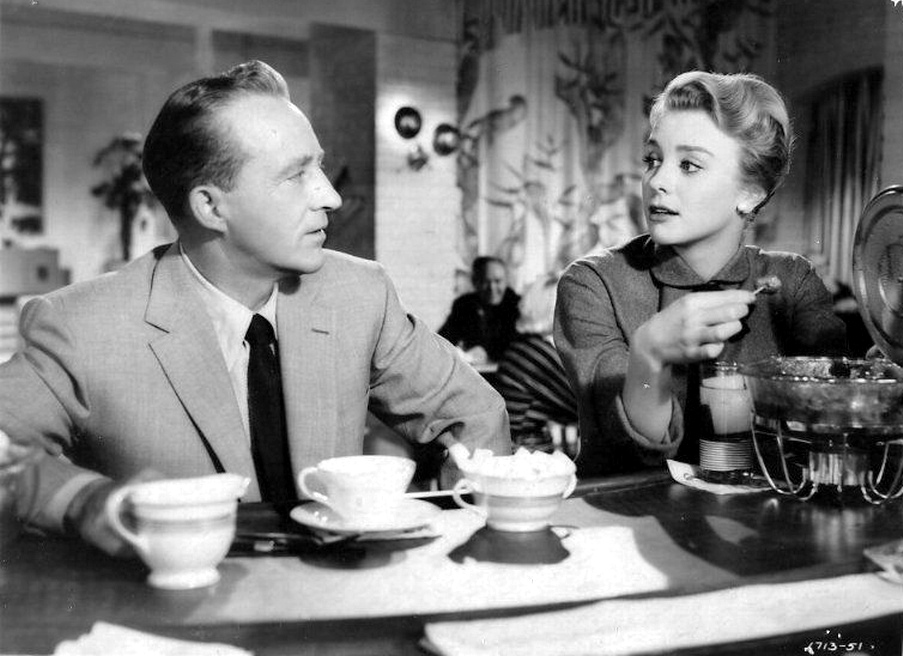 Bing Crosby and Inger Stevens in Man on Fire Movie (1957)

After a stint in a chorus line and a few stage productions, Stevens caught the attention of Hollywood and starred in her first film, “Man on Fire,” opposite Bing Crosby.

What followed was a career that deftly navigated TV and film, achieving great success in both – a rarity for the time. She stared in The Farmer’s Daughter for 3 years and appeared in episodes of Bonanza, Route 66, The Alfred Hitchcock Hour, The Eleventh Hour, Sam Benedict, and The Twilight Zone.

In film, Stevens won leading roles in A Guide for the Married Man, with Walter Matthau; Hang ‘Em High, with Clint Eastwood; 5 Card Stud, with Dean Martin and Robert Mitchum; and Madigan with Henry Fonda and Richard Widmark.

It was during this career in film that Stevens gained her reputation for pursuing intense relationships with her leading men. There is speculation around how much of this is true, as Stevens was said to have courted the press’s exaggerated detailings of illicit affairs, passion, and madness at the relationship’s dissolution in order to promote her work.

She is quoted as saying of these work romances: “When the cruise is finished, the romance may linger, but the relationship seems to shift and change. You tell yourself you’ll never fall in love that way again, but it happens…”

Who is Inger Stevens Husband?

Following her death, Ike Jones claimed to have been secretly married to Stevens. Although there was no marriage license, they had maintained separate homes, and continued to file tax documents as single people, at the time Stevens’ estate was being settled the court ruled in Jones’ favor and made him the administrator of her estate. 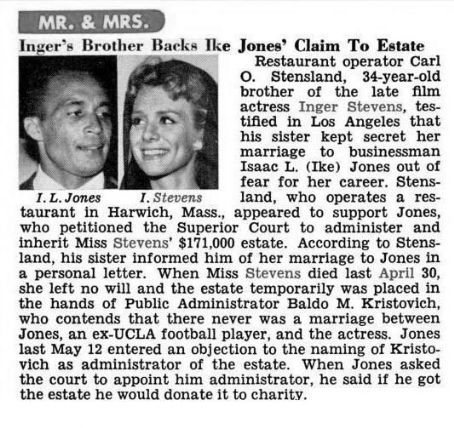 Stevens’ brother, Carl O. Stensland, confirmed the marriage, stating she had kept it hidden “out of fear for her career.” It transpired they were married in Tijuana, Mexico on November 18th, 1961. As was evidenced at the time by Mai Britt’s career plunge when she married Sammy Davis Junior, the public was not supportive of interracial marriages. Given that they weren’t even fully legal in all US states until 1967, the decision for Stevens and Jones to keep their’s secret is sad but hardly surprising.

On April 30th, 1970, Stevens was found on her kitchen floor by her roommate and longtime friend Lola McNally. According to McNally, when she called Stevens’ name, she opened her eyes, lifted her head, and tried to speak, but was unable to make any sound. Stevens died in the ambulance on the way to the hospital. On arrival, medics removed a small bandage from her chin that revealed a small amount of fresh blood oozing from a cut that appeared to be a few hours old.

Los Angeles County Coroner Dr. Thomas Noguchi attributed Stevens’ death to “acute barbiturate poisoning” – a central nervous system depressant used in anxiolytics and hypnotics, and used in high doses for physician-assisted suicide and in combination with a muscle relaxant for euthanasia and capital punishment by lethal injection. Her death was eventually ruled as suicide.

McNally told officials that she had spoken to Stevens the night before and had no reason to suspect trouble. In the years leading up to her death, Stevens had been busy making films, and the year of her death she was scheduled to begin filming a new TV series in the fall.

Although there is no suggestion that was struggling at the time of her death, she had called herself “very much a hard-luck girl” in the past and even attempted suicide after a New Year’s Eve party in 1958.

This wasn’t her first near-death experience: She collapsed from carbon monoxide poisoning while filming “Cry Terror” in the Hudson Tubes, and in 1961 she was the last passenger to leave a jet that crashed on landing at Libson and exploded a half‐minute after her exit.

In The Hitchhiker, one of the most famous in the series’ history, she played Nan Adams, a young woman trying to cheat death, as personified by the hitchhiker stalking her throughout the episode. Stevens portrayal of her character’s gradual awareness is a compelling and shattering performance, one that fully demonstrates just how talented Stevens was.

Stevens said in an interview a few years prior to her death that in addition to these near‐catastrophes, she often felt depressed over “many other sorrows, including the fact I came from a broken home, my marriage was a disaster, and I am constantly feeling lonely.”

Despite her notoriety and a gold-dusted IMDB page, Stevens has sadly become a footnote in Hollywood’s biography.

She is seldom remembered and when she is, the memory is defined by the men surrounding her at the time. There’s very little information about her personal life outside of her sexual relationships and she is repeatedly described from the male gaze.

Even a description of her death mentions she was “clad in a flimsy, golden brown negligee almost matching her California tan.”

Too often, women are deified in this way. Their tragedy and stillness celebrated, as the suffering of women continues to be fetishized in society and in entertainment. Profiles of dead starlets feed into this voyeurism, treating the subject as an abstract concept, a body on which to enact the darkest fantasies of a damsel in distress.

Stevens was not a damsel, nor was she abstract, she was a talented actress whose challenges with mental health went unnoticed and ultimately led to her death. She has a right to be remembered as more than that blonde actress, whose top searches on Google include “inger stevens nude,” “inger stevens hot,” and “inger stevens naked.”

Stevens once said “I hope to leave something behind me, some contribution. You know, I’m rather fortunate to be here at all.” Let’s grant her that much.