Scandinavian design is about so much more than furniture; from electronics to fashion, urban planning to interior design, Nordic minimalism has found its way into every aspect of our lives. But what does Scandinavian design mean?

We’re taking a deep dive into Scandinavian design, Nordic minimalism, where it all began, and how to bring it into your home:

What is Scandi design

Scandinavian design is characterized by a minimal clean approach that seeks to combine functionality with beauty. Its focus is on simple lines and light airy spaces, devoid of clutter. These principles extend to all areas of design, from architecture to electronics, but it’s most commonly used to describe interior design, including furniture, textiles, ceramics, and lighting.

There is nothing superfluous about Scandinavian design, or Nordic minimalism as its sometimes called, as it strips back the unnecessary, showcasing the essential elements of any product.

Scandinavian colors are mostly neutral and monochromatic – bright whites with black and tan – with pops of color added through the use of an accentual hue. Plush pinks, gray-blues, and colors rooted in nature – like sage – are the most popular in Scandinavian design.

This clean but warm theme, alongside the calming nature of a large, light-filled space without any clutter, is partly why Scandinavian design is so popular. This sort of Nordic minimalism allows people to invite peace into their home without creating a space that is uninviting or cold. It is full of life without being chaotic.

The Scandinavian design movement emerged in the early 20th century and flourished throughout the five Nordic countries in the 1950s.

Originating from the Danish Selskabet for Dekorativ Kunst, who launched its Skønvirke, literally “Graceful Work”, magazine in 1914, the title went on to become the name of a new Danish style of arts and crafts to rival contemporary trends like Art Nouveau – often reserved for the social elite, whereas Skønvirke promoted local crafts and accessible design.

From the 1930s, designers such as Alvar Aalto, Arne Jacobsen, and Maija Isola began producing and created a “golden age of Scandinavian design.” Their work was inspired by the concepts of Constructivism, Functionalism, and in some cases Surrealism. It didn’t reach international recognition and its stellar levels of popularity until the 1950s, when the Lunning Prize was awarded to outstanding Scandinavian designers between 1951 and 1970. Scandinavian design history and its concept has been the subject of scholarly debate, exhibitions, and marketing agendas since the 1950s. Many emphasize the democratic design ideals that were a central theme of the movement and are reflected in the rhetoric surrounding contemporary Scandinavian and international design.

Why design is important

A guiding principle of Scandinavian design is to establish harmony with one’s environment and to create things made to last. It seeks to compliment the art of living well, by promoting a simple home environment that is filled with quality items and enhances an unencumbered lifestyle devoid of excess consumerism. In this way it’s both important for an individual, as a home environment that encourages a life well lived is an increasingly important counter to the pressures of modern life, and for the planet, as it challenges rampant consumerism and deepens our connection to nature. 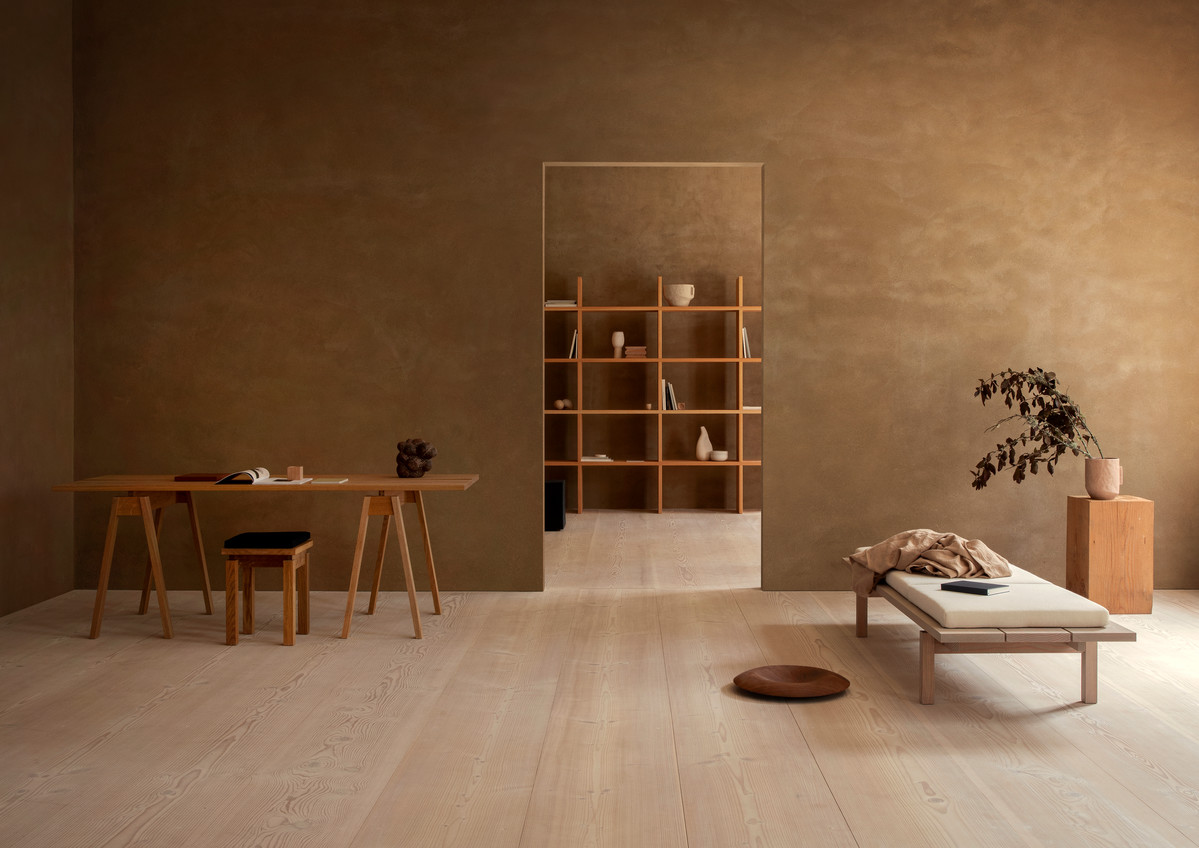 Bold and graphic, Scandinavian graphic design remains clean while using simple, stripped back imagery to make its point in posters, typography, and marketing, as well as art. Clean lines, restrained color palettes, and uncluttered visuals are all prominent in Scandinavian graphic design. Often, a few lines are used to create a suggestion of an idea, and the visual language relies on the use of dead space. It is clever design that allows the viewer to fill in the blanks, instantly recognizable while bare. Functionality is key here, as Scandinavian graphic design aims to give as much information through as few markings as possible.

Left: ‘This is This’ by Lars Fuhre; Right: ‘Monday’ by Anna Johansson from The Poster Club

High quality, natural fibers, and well-made pieces designed to last are the lifeblood of Scandnavian fashion design, perhaps explaining why Scandinavia has been at the forefront of the sustainability movement in fashion – Scandinavian fashion has always been slow.

Although minimalism and monochrome are still rife within the world of fashion design, this is an area that also has space for a more playful, irreverent approach. From maximalist, floral designs to bright jewel-toned colors, pattern clashing to traditional knitwear, many Scandinavian fashion brands will focus on beautiful, well-made basics while adding a splash of fun – just as Scandinavian interiors add a pop of color to an otherwise simple room.

Scandinavian beauty has seen phenomenal growth in the past decade, as traditional methods that utilize local flora has come into favor. Scandinavian design packaging has been emulated worldwide, while the principles of Scandinavian beauty – choosing natural, organic, and local ingredients – is being interpreted in each new territory.

Scandinavian design is minimal, so the few pieces in the room have got to make it count, which is why so much emphasis is put on items like the humble chair. Craftsmanship and timeless design are likely to be found in any item in a Scandinavian room.

Lighting is a huge part of Scandinavian design, as the Nordic countries get so little of it naturally during the winter. As well as maximizing natural light at every opportunity – with white walls or large windows – lamps and lighting solutions are critical.

In every room there should be multiple light sources, ranging from the warm, low light of a candle to the bright overhead glow of a ceiling light. Scandinavian design seeks to spread light as effectively as possible without creating a harsh atmosphere. Poul Henningsen’s distinctive lamp designs are an excellent example. The designer looked for a solution to spread the bulb’s light as widely as possible without the glare being visible. This resulted in the elegant floral shape of his lamp, with each petal shape softening and spreading the brightness of the bulb.

Home goods create a perfect balance between minimalism and feeling relaxed. They put forth a calm-and-cozy vibe, allowing your space to look like a Kinfolk spread but remain completely liveable.

How do you design for hygge? You can’t, really, it’s an emotional response to a feeling of comfort or happiness. You can, however, create an environment that promotes a life well-lived. Fill your home with things that give you joy and welcome your loved ones in: low-level lighting and candles, a beautiful dining set, thick woolen blankets, even a board game should do it! 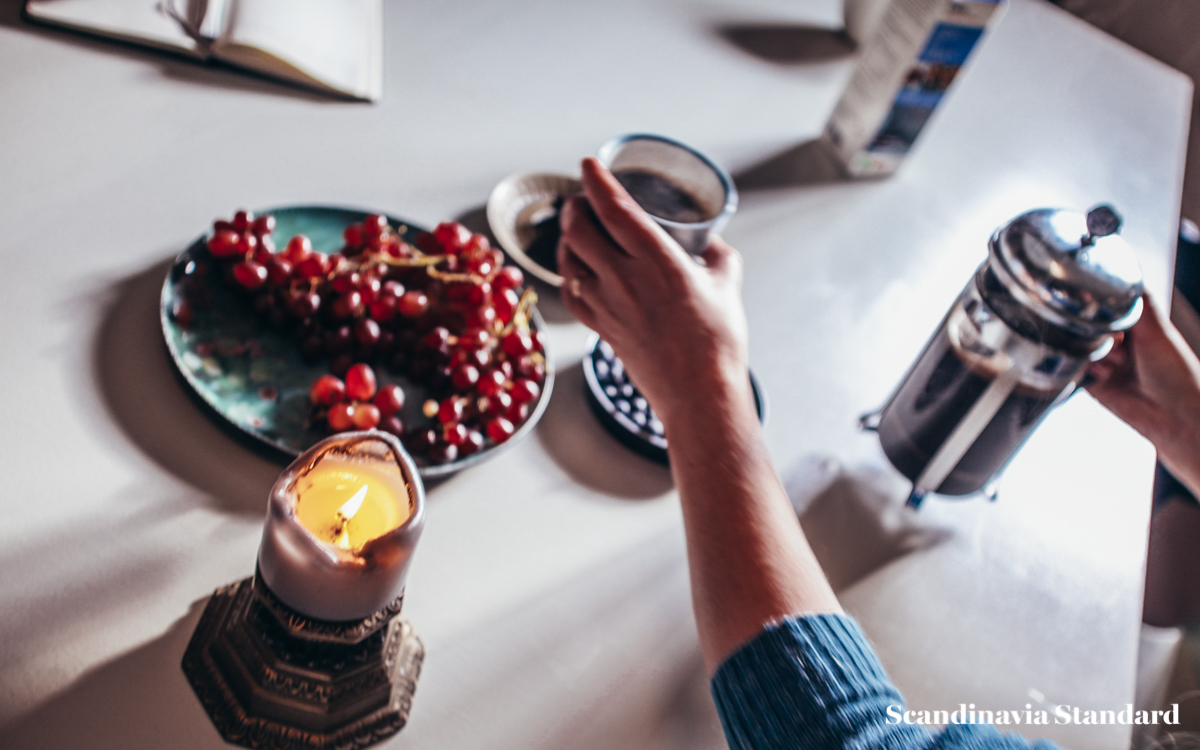 Given Scandinavian design’s propensity for utilitarianism, it should come as no surprise that sustainability is now integral to most modern Scandinavian design. Nordic design principles of craftsmanship, quality, and enabling a better day-to-day are a natural bedfellow for sustainability, which naturally seeks to return to slow, local manufacturing of high-quality products designed to last.

The price point of Scandinavian design can seem a little high, but for the most part it’s simply about quality. Don’t be fooled into spending more just because something has hygge written on it, but accept that buying high-quality pieces will cost more upfront (but less over time – you won’t need to replace any time soon!)

Simplicity, functionality, and elegance – these are the calling cards of Danish design. Known for its sleek lines and sophistication, Denmark is also the country you’re most likely to find a touch of luxury. Chairs are most commonly associated with Danish design, but the industry has found roots in fashion, beauty, electronics, ceramics, and homeware, alongside furniture and products design. Denmark is also now the only country to host a fashion week in the Scandinavian countries.

Don’t be fooled into thinking Danish design history was a boys club:

Finnish design is about more than looks. In Finland, design is as much about the nature that surrounds it as it is about the everyday lives it needs to support. Finns take inspiration from nature and turn it into objects, architecture, and a blueprint for a way to live. There’s an emphasis on timeless, natural design, recognizing that everything is borrowed from nature and will one day return.

As the famous Finnish architect and designer Alvar Aalto once said:

“Nothing is ever reborn but neither does it totally disappear. And that which has once been born, will always reappear in a new form.”

For more Finnish designers, be sure to check our list of emerging talent.

Swedish design is minimalist, with an emphasis on functionality and clean lines. It’s most famous export, IKEA, also places emphasis on democratic design, meaning good, quality design should be accessible to all – especially when it comes to furniture. Sweden is also known for traditional crafts including glass, the instantly recognizable Dala horse, and Sami handicrafts, these are the bone and leather items crafted by the indigenous Finno-Ugric people inhabiting Sápmi.

Want more? Check out these Swedish women designers to know.

For more, check out our list of emerging Swedish designers.

Factors such as nature-inspired forms, graceful lines, and light are prominent in Norwegian design, but its biggest influence is function. The design in Norway is geared towards the outdoors and thriving in harsh winters, with very little room for luxury. Instead, a sense of wellbeing is found in the comfortable and robust.

Looking to buy some modern design when in Oslo? Make sure to stop by Kollekted By.

Contemporary Icelandic design is perhaps an anomaly amongst Scandinavian design. While its by no mean impractical, it is perhaps the most avant-garde, as the need for resourcefulness and innovation in a country so limited when it comes to natural resources has seen creativity flourish. Wool is ever-present and plays a large part in Icelandic traditional design, while more modern materials like fish-leather can be found in modern contemporary design.

Scandinavian design differences between the countries

Although it may originate from one group, there are subtle differences between the Scandinavian design coming from each country.

Norwegian design can be described as less style-conscious than its Scandinavian neighbors. Its designs offer a quirky mix of cutting-edge, modernist, and historical design.

Sweden stays muted in colors but also in character. Sticking to pale tones and nothing too loud. A distinguishing feature of Swedish design over the years is the prioritization of efficiency – an ethos that its designers successfully embrace.

Perhaps as a way of encouraging hygge, Danish design can be more playful than its Scandinavian neighbors, as it welcomes tonal shades and the odd pop of color. Danish design has also been heavily influenced by the German Bauhaus School and the country’s special relationship with Japan.

How does Scandinavian design differ from mid-modern century

The two are often conflated and used interchangeably, but there are crucial differences between the styles. While there is a great deal of overlap, mid-modern century is an altogether darker style that focuses less on light. It’s typically used to describe Modernist design from the 1940s-1960s.