NorthSide Festival in Aarhus is often considered the sophisticated cousin of the dusty, hedonistic field-romp that is Denmark’s famous Roskilde Festival. Nestled in the city of Aarhus, it’s not too far from the centre, smoothly-run, the food offerings are gourmet and prettily-presented, and at the end of the day you forgo the tent for a shower and a warm bed (assuming you managed to nab an Airbnb in time; they go quickly ahead of the festival!). It’s also been giving Roskilde a run for its money with major lineups that impress – last year saw the likes of legends such as Beck and Iggy Pop gracing its stages.

This year, however, NorthSide had a rougher, Roskilde feel. Because you know what else happened? Rain, and a fair bit of it.

Every morning in Aarhus city centre, you could spot the festival goers by the mud caked around their boots. But that didn’t stop attendees from having fun (because let’s face it, squelching around in the mud to great acts is pretty damn fun, okay) – it just inspired them to innovate a new repertoire of dance moves to keep from sliding into the ground.

Here are the acts we saw & loved at this year’s rain-soaked NorthSide Festival:

The night kicked off with Danish singer MØ, who delivered up a raw, primal performance. There was no prissiness or preening here, just solid belting out vocals and kicking about on-stage.

It was the artist’s first gig since 2014 and the act on everyone’s lips; a quick search of Twitter during the festival revealed that every #NS17 hashtag referred to Frank Ocean, and Frank Ocean alone. While the gig itself polarised punters – some called the introverted performance “dull” (mainly those at the back) and others found it intimate (the kids at the front). But either way, he drew crowds in droves, with listeners stretching all the way back to the other stages. Plus, Ocean provided his own merch tent for the hardcore fan in all of us. Respect.

The singer captured our hearts with beautiful piano melodies sung in his native Icelandic, slurping whiskey between numbers. But this was no stationary performance, with Jonnsson taking to centre stage at the end of the gig to belt tunes at the audience.

The Kills killed it, basically. From the moment frontwoman Alison Mosshart strutted on stage in a black-get up and neon alpaca knit, you knew that you were in for a pure rock and roll experience. She shed the knit, she headbanged and she howled. The audience was utterly smitten.

Britpop legend Richard Ashcroft of The Verve-fame was an instant hit when he strode onstage, signature lips pursed, and shook his “Aarhus” t-shirt at the audience to illustrious cheers. The gig straddled the divide between his newer, solo work (the phrase “music is power” is embedded in our brains like some kind of malthusian drill after a song which seemed to be entirely made up of that one sentence), and those classic Verve hits everyone was mostly there for, if we’re honest. And there was absolutely nothing bittersweet about hearing “Bittersweet Symphony” performed live in a finale that left the audience drunk on nostalgia and shouting along.

Here’s one we hadn’t heard of before, but oh boy, are we glad we tagged along. The 80s Danish rock-and-pop icon delivered a fun, vibrant and campy performance that drew a crowd full of young and old alike. Think watching Duran Duran, but in Dansk. 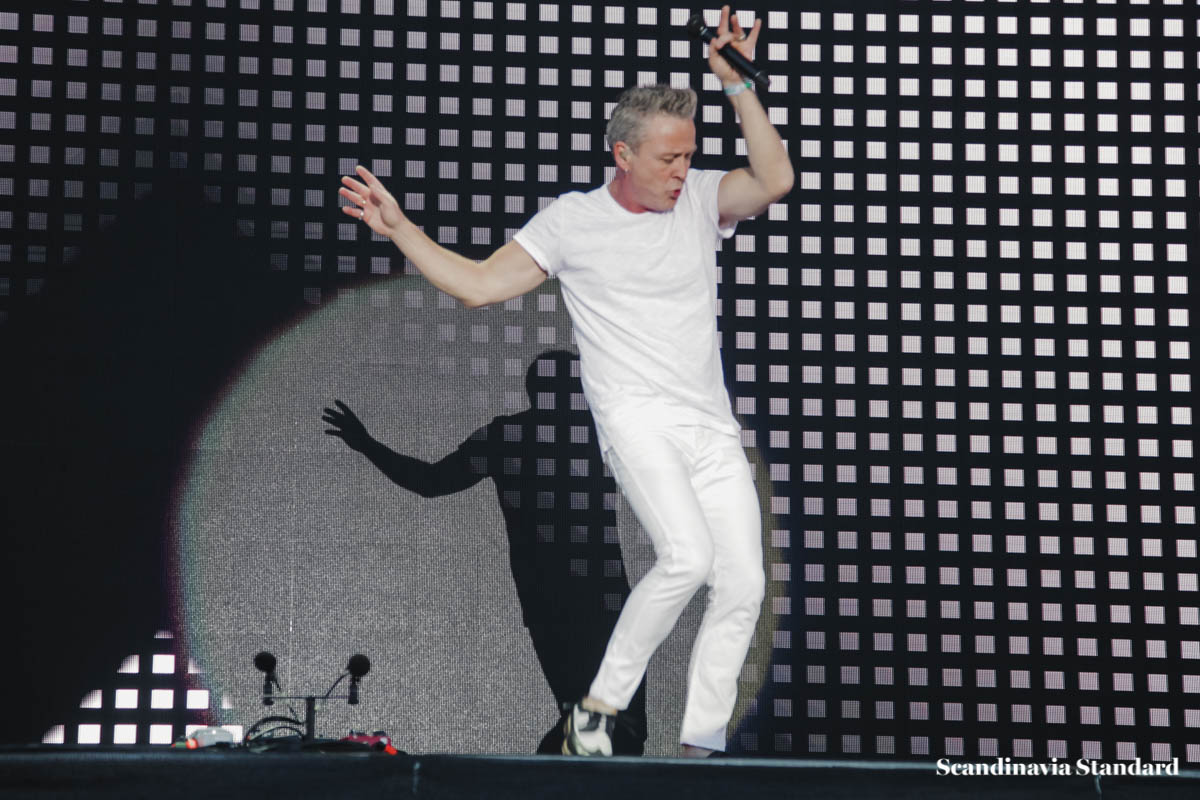 These low-key kids delivered up chill harmonies in pretty pastels and take home the prize for the best lighting in the whole festival.

The Berlin-residing, Danish singer returned to her homeland to seduce the audience with her haunting, melancholic piano ballads, supported by a talented all-women backing band who sparkled in both sound and sight. 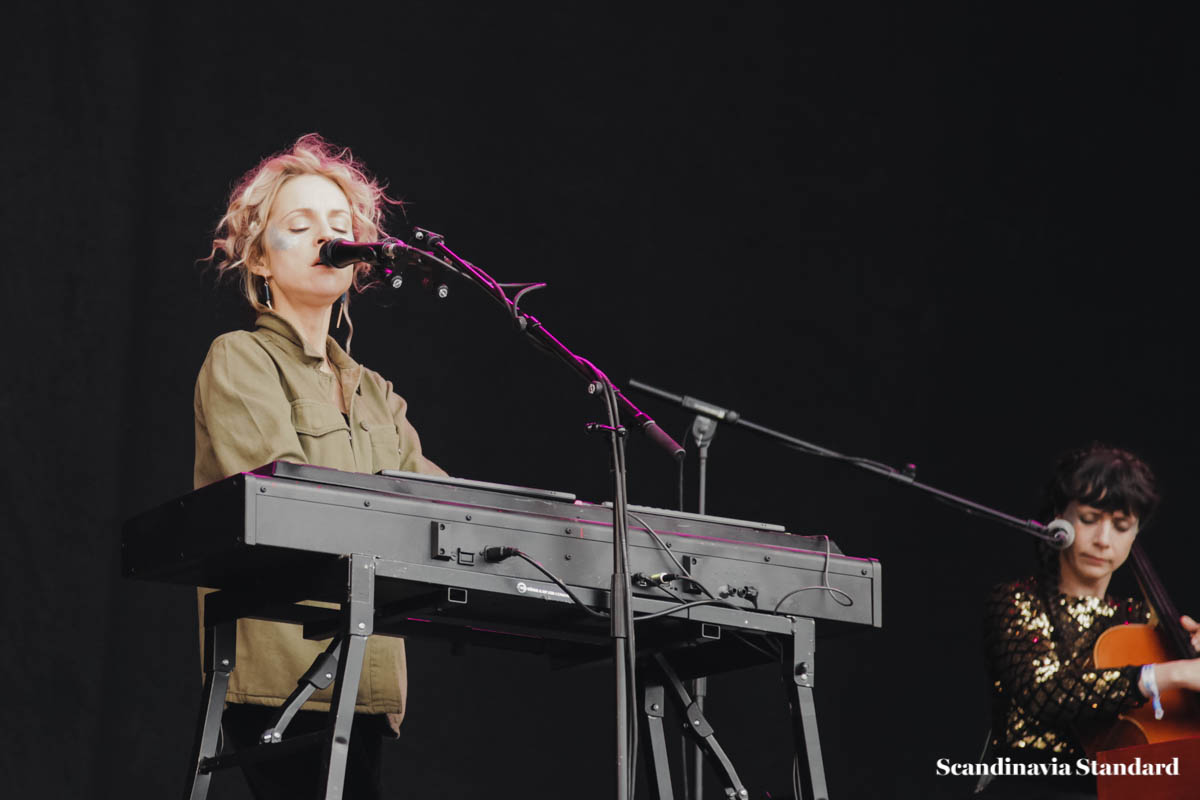 Bisse is unlike any other act we know. The Danish singer is known equally for his penetrating lyrics – which often take the form of intense monologues – as he is for erratic, passionate and sensual performances that see him shift costumes on stage and dive into the audience. He certainly didn’t disappoint: swapping red robes for sports jackets for feathered masks, waving the mike stand high in the air like a preacher towering above his devotees.

With a highly technical style, there isn’t a lot James Blake can do on stage but perch at his piano and offer up his sophisticated tracks to fans. The sleek, minimalist performance kept attendees glued despite the oncoming drizzle, with Blake treating us to a cover of Don Maclean’s “Starry Starry Night.” 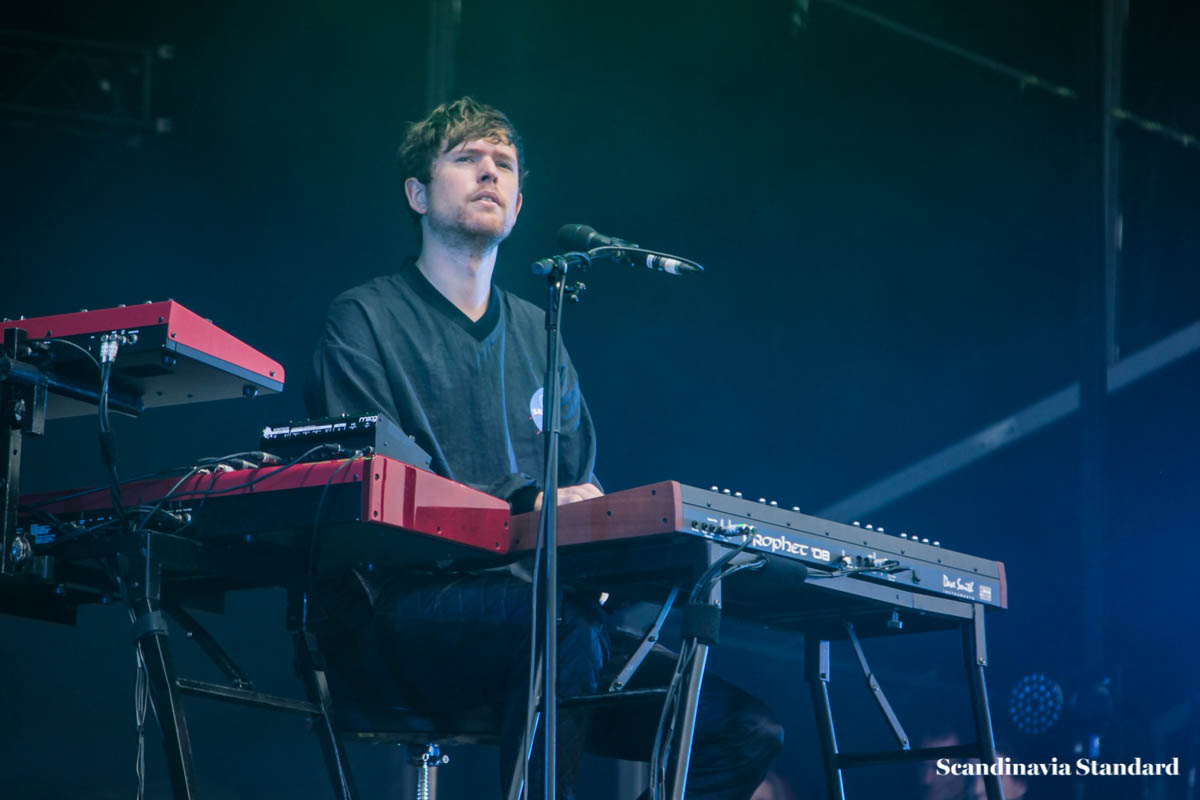 Rounding the twenty-year anniversary of their legendary album “Ok Computer,” fans poured in to see British band Radiohead in the hopes of hearing some of their older tracks, the ones that hadn’t graced setlists in years. Happily, the five-piece delivered a diverse repertoire full of old and new, setting the tone with their latest single, the exquisitely moody “Daydreaming” before going on to deliver a haunting, magical performance that lingered long after the the rain had dried from our coats.

Yorke wasn’t into general festival banter, but acknowledged that the end of the performance was “fucking sad, but everything’s gotta end sometime,” in response to audience moans of despair. Those moans quickly turned to excited screams as the familiar opening bars of hit 1997 track “Karma Police” kicked in, with thousands joining in a collective chorus of the closing line “For a minute there, I lost myself” and utterly losing themselves in the process.

As always, NorthSide delivered up an impressive array of international acts, giving bigger festivals a run for their money with the legendary headliners Radiohead and Frank Ocean.

That said, the festival copped flak for last year’s lack of gender diversity in the bill, and while this year was a significant improvement, we definitely would have loved to see more women and non-binary performers take to the NorthSide stages.

Missed the festival this year or just feel like rocking out? Check out our playlist!