Families in Denmark eat together, so in theory there’s no such thing as a restaurant where kids aren’t welcome. But there are definitely options that will thrill more than others – and by that we mean in atmosphere, distractions and menu options the kids will actually eat. So we’re unashamedly preaching great burgers, pizza and pastries, because eating out in Copenhagen is tough enough on the pocket; consumption should be guaranteed!

Our picks aren’t just about kids’ happiness – they’re also about yours. “Family-friendly” restaurants can be kind of a drag for parents, so we’ve considered the décor, menu options and booze for you too (you’re welcome!).

We’ve also factored in the ants your little ones may have in their pants after a good feed, serving each place with a side of parks, museums, sights or activities nearby, in which they can burn energy off after your meal.

Here are the best spots to take your kids out to eat in Copenhagen:

This spot on the renovated Sankt Annæ Plads serves tapas-style plates, sandwiches, tarts, and homemade cakes. For kids there is croque monsieur, juices and smoothies, as well as marshmallow-studded varm chokolade (hot chocolate). They can drum up an appetite at the small-scale, modern playground opposite, which is fenced in for your added relaxation. Seating is out on the pavement or cosied into the hyggeligt interior. This is also a good snack stop – cookies for them and a coffee (or spice-spiked gløgg around Christmas) for you, to walk around the harbor.

On the side: Right there is the city’s harbor front, with its old flag-covered wooden boats; Skuespilhuset (Royal Danish Playhouse); Operaen (the Opera House) and the cultural platform Ofelia Plads. Amalienborg Palace and Marmorkirken (the Marble Church) are nearby, as is Nyhavn for canal tours, classic candy-colored picture ops and Vaffelbageren’s giant waffle-cone ice creams.

Reliable, retro-style cafés complete with washing machines and color-coordinated paperbacks, Icelandic-owned Laundromat combines food that’s a sure-fire score with kids with a perfect Latin avocado sandwich and delicious beer for you. And did we mention the toy tables*? Set in a corner and strewn with excellent vintage animals, dinosaurs, castles, figures, pirate ships and whatnot, these could only be improved if they had a cage around them. We’re kidding! Sort of! The kids’ menu fish and chips is so huge, two under-fives of average appetite can share one; for older offspring, an adult’s portion to share is cheaper. For the sniffy, plates of pancakes at 58kr are available all day.

On the side: For Gammel Kongevej: Copenhagen Zoo and Frederiksberg Have. Near Århusgade: enormous Fælledparken, where Tårnlegepladsen (a playground of Copenhagen’s towers in miniature) is a highlight. If you’re heading to Nørrebro, you’re next to Sankt Hans Torv, at whose cafés you can grab another øl (beer) while they run about (in summer in the square’s fountain). Superkilen is also further up Nørrebrogade.

* Only at Gammel Kongevej and Århusgade 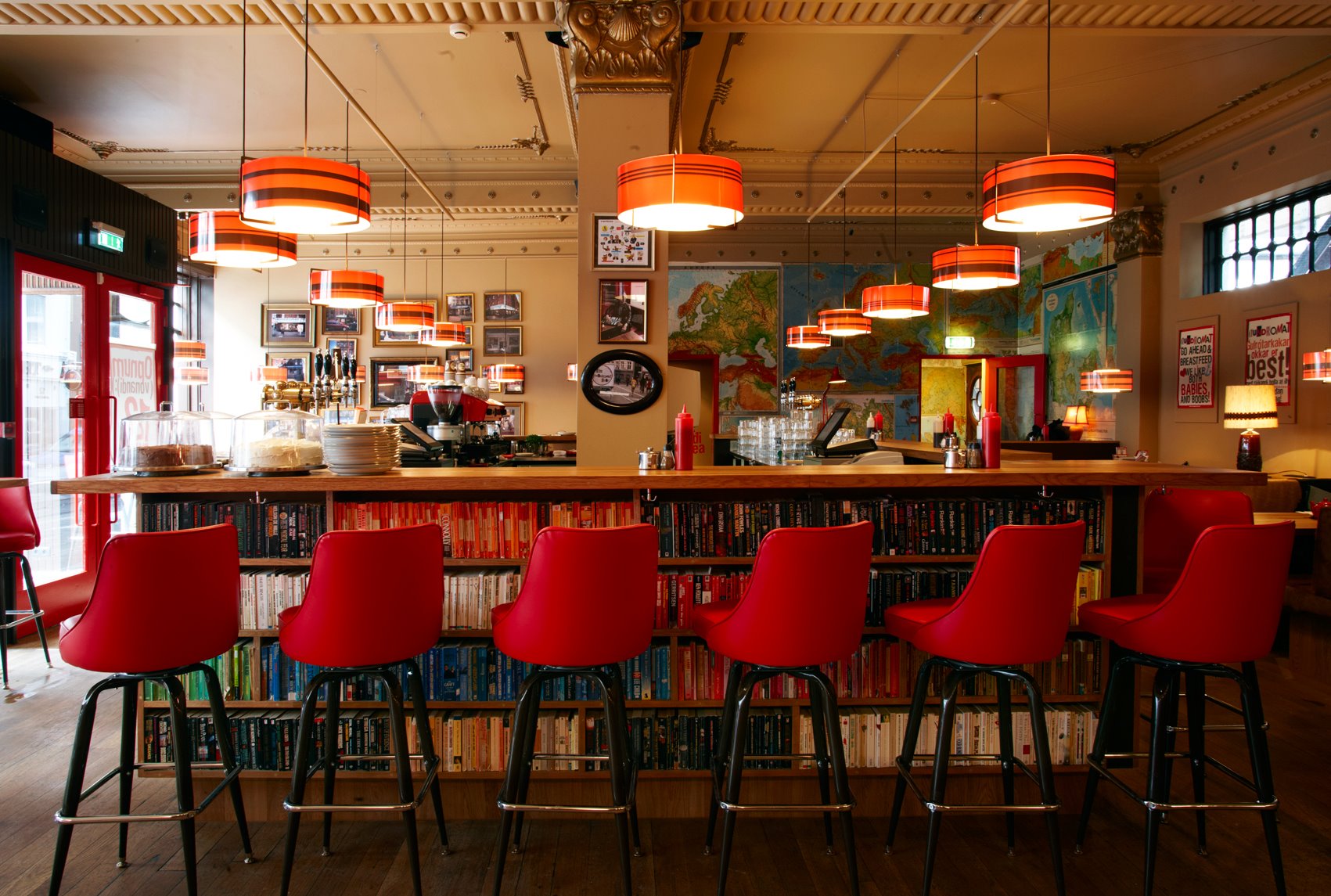 If you’d suggested sushi as a family-friendly option to a parent in the Eighties, they’d have scoffed, before turning on their heel to McDonald’s. But many of today’s cosmopolitan kids know their maki from their miso, and at Sticks ‘n Sushi, sleek interiors combine with five kids’ bento boxes of hosomaki rolls, nigiri and yakitori sticks of chicken meatballs. There are activity sheets, crayons and child-friendly chopsticks, and everyone gets a chocolate fish at the end. Of the 10-plus branches across the city, Borgergade’s staff is particularly sweet with children, while Hellerup’s decked garden comes complete with sandpit, sand toys and deck chairs.

On the side: Borgergade is central, so Kongens Have and its castle Rosenborg Slot are just next door, with Statens Museum for Kunst, the Geologisk Museum and Botanisk Have beyond. Nyhavn, the harbor front and Amalienborg Palace are also nearby. The Hellerup branch is between the beaches at Hellerup and Charlottenlund for a paddle and a play.

A hidden trattoria-style treasure, this celebrated neighborhood pizza house has a vast menu of 39 incredible pizze rosse (with tomato sauce) and another 17 pizze bianca, as well as homemade pasta dishes. All pizzas come in one (huge) size, and two can easily feed a family of four, with a margherita starting at 54kr. Seating is limited, so if the weather is good take your pies to the next door concrete skate park, where the kids can gallop about between slices while you sip on cold Italian beers to go.

On the side: Torvehallerne is very near for ice cream at Is à Bella or Paradis; the sculptural surface and stepping-stoned urban stream of Israels Plads is in front of it; and Ørestedparken is beyond, which includes a playground. 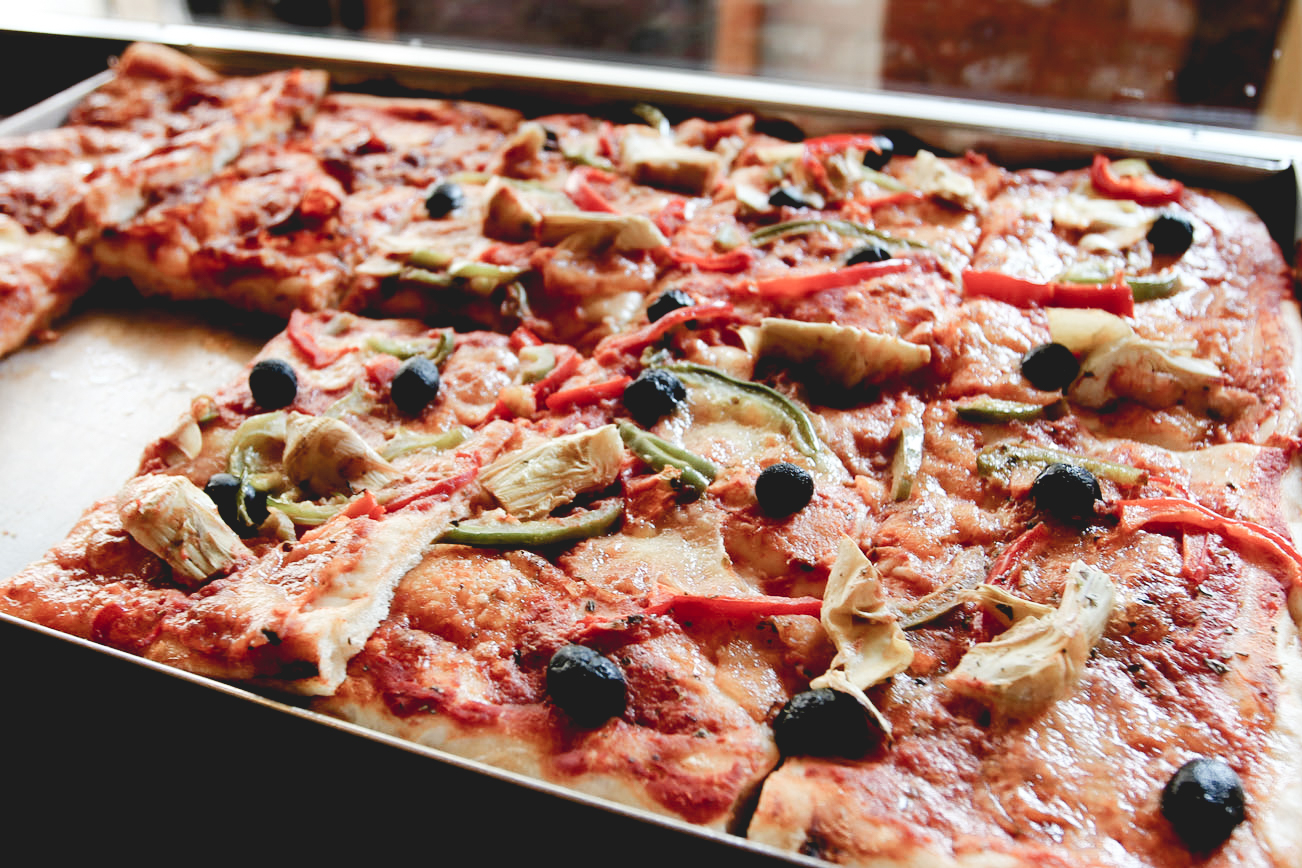 Nestled into one of Copenhagen’s prettiest squares is possibly the world’s most original setting for a burger: a tram car from Copenhagen’s Line 14, whose rails crisscrossed the city from 1863 to 1965. Walls adorned with vintage posters about the tram’s route and ticket prices, and old black-and-white images from its heyday make this a nostalgic experience. The menu is all burgers and ommelettes, and a children’s burger of chicken or beef at 45kr (rising to 59kr from 5pm, including wedges) comes with activity sheets to amuse. Being an actual tram, this small space is inflexible, with no room for high chairs or prams; if you’re a family of five or more, you won’t fit at one table. In summer there’s seating outside, without the full tram experience.

On the side: You’re right by the Rundetårn, whose giant twisting ramp always delights kids, not to mention its citywide views and giant telescope at the top. A block beyond is Kongens Have and Rosenborg Slot.

Housed in a former royal pavilion in Kongens Have that dates back to 1606, the charming Herkules Pavilionen is an open-air café whose Neoclassical façade originates from 1773 and is embedded with a commanding statue of Hercules himself. Since 1999, this place has hosted relaxed regulars at small tables to its front, serving them from a hole-in-the-wall at the back, where covered seating can also be found. As well as grilled vegetarian or pulled pork sandwiches, Herkules is great for easy snacks, unbeatable homemade lemonade, Nørrebro Bryghus beer, and ispinde or scoops of ice cream.

On the side: One of Herkules’ biggest selling points (apart from the charm) is its proximity to a small outdoor puppet theatre and a wholesome playground of wooden dragons, stepping stones, balance-on logs and a small rope assault course. Romantic Rosenborg Slot is in the distance, with a moat full of fish to spot.

Burgers at a petrol station as the ultimate twist on the drive-in happens at Gasoline, considered one of the world’s best burger joints. Combos of a burger, fries and a drink are reasonable, though the latter will be carbonated (or alcoholic), so head to the kiosk across the street if juice is more your kid’s style. There’s little seating here, so expect to make use of benches running alongside the restaurant, or, walking towards parallel-running Store Kongensgade, find a spot in the tiny urban park. Gasoline only serves until the burgers run out, and at weekends, when people are ravaged by hangovers, the queues can be very long. For kids you may also want to ask the Grill to go easy on the salt, as the fries tend to be heftily seasoned. Also be aware that you’re right on a road, so if you have toddlers who tend to make a run for it, this one may not be for you.

On the side: You’re a short hop from Nyhavn for boarding the canal tours; Amalienborg Palace and the waterfront across from Operaen; and Kastellet and Kongens Have for green spaces.

You can roll your eyes and pretend you’re above a theme restaurant, but Pirateriet is in the world’s most tasteful amusement park, in one of the world’s most tasteful countries, so Chuck E. Cheese it is not. An actual 100-ton replica Danish frigate floating on an actual lake, this great value (for Tivoli) restaurant is every child’s dream – from the growling life-size waxwork pirate that greets them, to the giant octopus suckered to the ship’s side; the paper pirate hats and eye patches they’re gifted on arrival to the pieces of eight they’re dispatched with. There are also chests of dress-up clothes, a menu that includes drinks served in plastic coconuts. In the cabins are ships lamps, candles and sheepskins to raise the taste level a notch, but what else is in it for you? Discounted beer refills, that’s what. Call it your guilty pleasure, but don’t feign disinterest – we know you’re into it.

On the side: Everything at Tivoli! But there’s enough at Pirateriet to amuse littler kids, plus the free topsy-turvy Rasmus Klump playground across the lake to distract from the pricey rides. 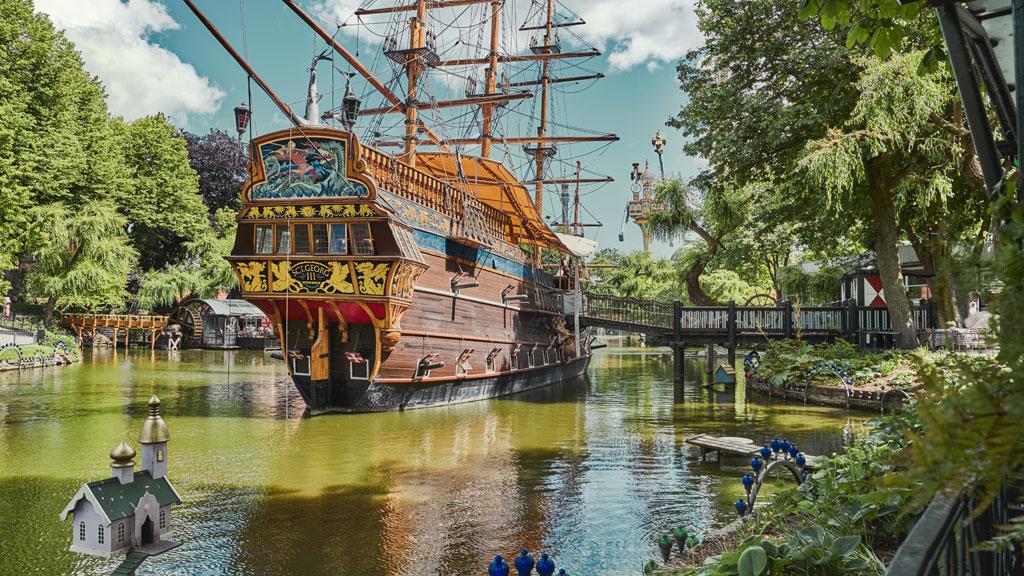 Copenhagen’s several classy bakery chains all make easy pit stops for bolle med smor og ost (bread roll with butter and cheese), but Lagkagehuset (“the layer cake house”) gets extra points for its manyoptions. Grilled sandwiches of ham, raclette cheese and a smidge of mild mustard for 60kr are large enough for two to share; pizza breads go for two for 50kr and pølsehorn (sausage rolls) are three for the same. To follow? Sweet-toothed souls will delight in the cake-and-pastry offering, including traditional Danish kanelsnegle (cinnamon rolls). Branches are everywhere you need to them to be: opposite Tivoli, inside Københavns Hovedbarnegård (Copenhagen Central Station), both on Strøget and just off it, as well as in every terminal at the airport. In Nørrebro there’s a picturesquely placed shop with outdoor seating facing the Lakes, and the store further up Nørrebrogade has a small table of toys and books for toddlers.

On the side: Lagkagehuset is always strategically placed, so it’s more a matter of working out what you want to do and finding a branch nearby. The Nørrebrogade store is opposite Assistens Kirkegård and also on the way to Superkilen.

The new location for the old Post & Tele Museum, ENIGMA’s pinkish façade hides Kantina, an airy café run by the folks behind Meyers. The menu includes the bakery’s amazing kanelsnurre, as well as flatbread sandwiches, croque monsieur and soup, and at the weekend the buffet brunch is 150kr for adults and 75kr for kids under 12. Long, communal tables share a space with surely the world’s best looking post office counter, a design store and displays of communication artifacts. There are old phones for kids to fiddle with, activity sheets and drawing materials, and postal worker hats, satchels and heavy red coats for playing dress-up. A huge beanbag and foam letters amuse babies, but note that parents of curious toddlers may find the accessibility of the shop’s breakable design items a little stressful. Find a schedule of regular free events for adults and kids on the Facebook page. In 2018, when the Metro station opens nearby, the museum, including a 400-square-meter indoor interactive children’s play space, opens upstairs.

On the side: ENIGMA is on the edge of Fælledparken, with its scooter, skate and water parks, as well as numerous playgrounds, including the Tårnlegepladsen (tower park) and Trafiklegepladsen, a network of miniature roads to cycle or scoot around, complete with mini roundabouts and tiny traffic lights.