“What are you going to do with your hair over there?” people asked when I decided to move to Copenhagen from New York City in 2018. From my sisterhood of curly-haired ladies who choose to wear their tresses in their natural state, it was a fair enough question. I was struggling with it myself.

Scandinavia is not exactly a region of the world known for rocking ringlets, glorious coils, and Afropuffs. I pictured myself, brown-skinned and curly-headed, bobbing along in a sea of straight flaxen gold, sort of like a reverse image of Game of Thrones’ Khaleesi among crowds of Dothraki and newly freed people of Yunkai.

Having curly hair can feel like being born with a very complicated piece of equipment for which you have been given no owner manual or guidance, apart from relentless social pressure to straighten it. An added complication is that so much about curly hair care depends on what particular type of curl you have and individual characteristics such as porosity (how much moisture your hair retains). Once us curlies find our own routine, tools, products, and stylists, we tend to hold onto them with all of our might, which is why moving to a new place can be a real concern.

The US has a long-standing curly and Afro-hair marketplace with a plethora of products, but many don’t ship to Europe due to EU restrictions that discourage manufacturers. After I learned this, I stocked my suitcase with a year’s supply of DevaCurl products, gathered a bunch of recipes for homemade potions and creams, and prepared myself to sandwich hair appointments into any trips that I planned to make back home.

For a while, it looked like my strategy of waiting to get my hair cut in New York could work, but after an extended period with no trips across the Atlantic, I realized that I needed to be more resourceful. I began asking around among other expat women of color about where they get their hair done.

Most of them said they deal with it themselves at home. I do not, however, trust my skill with a pair of scissors and did not want to induce a look of horror on my New York stylist’s face when I eventually did make it back into her chair.

While there are many African hair shops around Copenhagen, they mostly specialize in wigs, weaves, and extensions, and they don’t have the products that many curly-haired people know and love. I needed someone trained and comfortable with cutting natural curls and keeping them healthy; a precious skillset.

I finally had a breakthrough when I saw a woman with a cute curly cut when I was waiting at an immigration office. The woman was from Brazil and told me about Clauds Oliveira, a Brazilian-Spanish stylist based in Copenhagen who, as he explained, “learned in Spain where curly hair is more typical.” I went to Clauds for my first haircut in Denmark. While he doesn’t use the same routine ordained by my hair gurus back home, Clauds is familiar with my texture and the cut is holding up well.

Clauds also advised me to get a filter for my shower head to soften the water. The heavily calcified hard water in Denmark is notorious for drying out skin and damaging hair (FYI, I found mine on Amazon).

Next I found a curly hair entrepreneur named Carriene Rendbo via a friend on Instagram. Carriene is a Brit who has been living in Denmark since 2009 and is the owner of a company called I Love Natural Hair. When Carriene first arrived to Denmark, she was wearing weaves and extensions. She would go back to London to get them done. At that time, she could find nothing in Denmark in the way of hair products. After suffering hair loss and damage from the weaves, Carriene explains, “I went on this whole journey of going natural and managed to find my way through YouTube videos.” Eager to share her learnings with others, she developed a plan and got her business started. 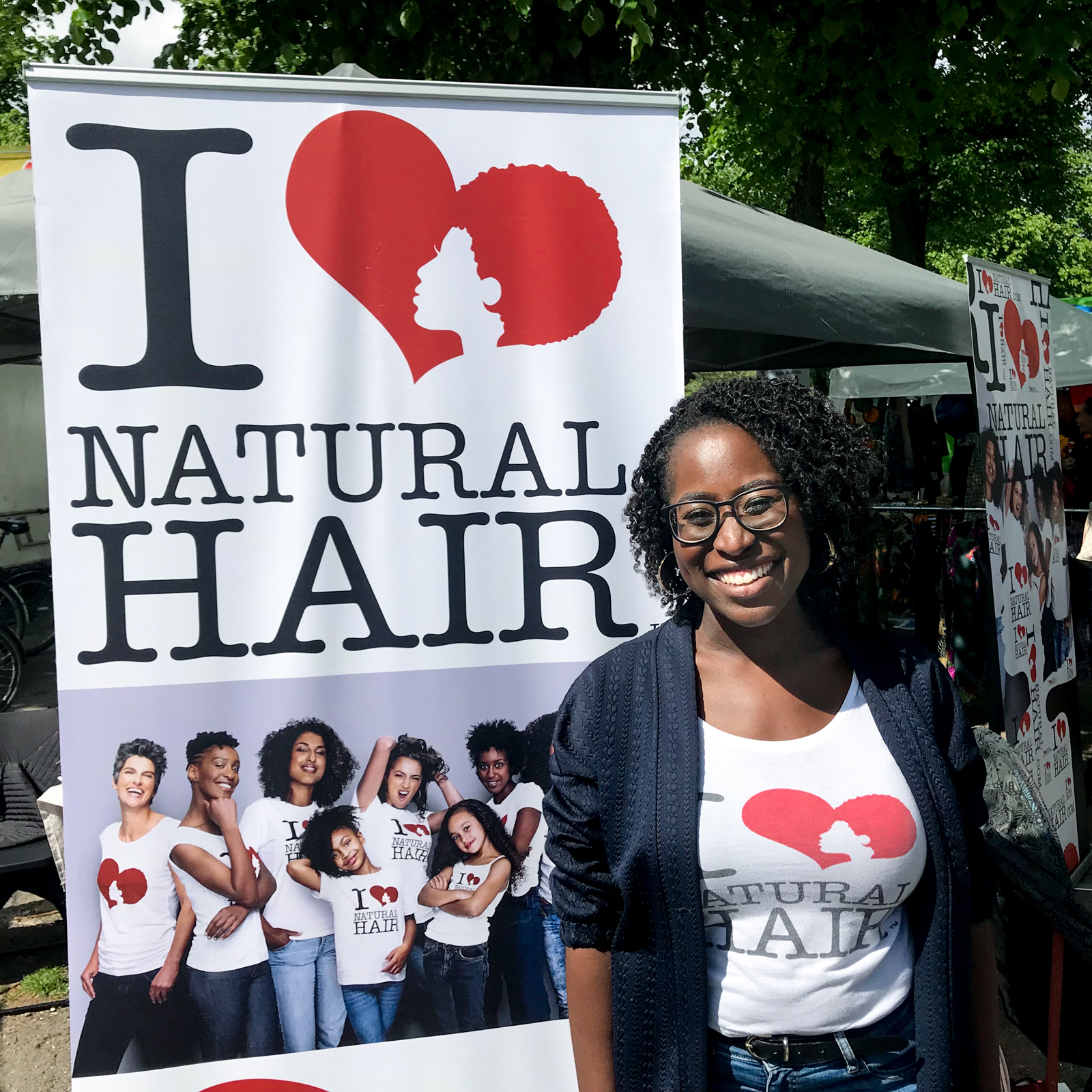 In addition to selling curly hair products from brands like Jessicurl and Cantu, Carriene offers practical information about different curl types and how to care for them.

As diversity increases in Denmark and a consciousness of curly hair care among women of all races has begun to boom, demand grows. It’s been a long time coming; for curlies who grew up here, especially those who are Black, mixed or of non-European origin, accessing knowledge that can help them embrace their natural hair and being different can often be a struggle.

On I Love Natural Hair’s Facebook page, there is a video of a young Danish woman named Sari describing her hair journey. After going through childhood and adolescence feeling isolated and unhappy about her hair, Sari’s mother referred her to the I Love Natural Hair website. Sari attended one of Carriene’s workshops, which offer scientific and practical information that those with curly hair can apply to caring for their hair and developing their own personalized styling routine. Sari now celebrates her beautiful abundant curls and knows how to properly care for them. Carriene says, “Helping women to embrace themselves is what I have been pushing, and making a choice about how you want to present yourself.”

Carriene introduced me to the burgeoning curly hair community emerging in Denmark. There are many more businesses catering to this market, most having launched quite recently. Other web shops have opened that offer curly hair products, many of them following the approach of Lorraine Massey, originator of the Curly Girl Method and co-founder of DevaCurl, which involves detailed guidelines for caring for curls and transforming damaged hair.

The site exclusively lists products that align with the Curly Girl Method, so they are free of sulfates, alcohol, and silicone. Iman launched the shop because she was frustrated with the lack of products available. She has been active in reaching out to brands in the US to find ways to get them into Denmark.

Iman’s company has grown fast; she already has over 20,000 followers on Instagram. “People are starting to notice the market,” Iman says. Since she launched, she notes that at least four other curly hair web shops have opened.

Brother and sister co-founders of CurlyHair.dk, Christina and Nick Brandstrup, are also based in Aarhus. Christina says she found the Curly Girl Method on Instagram and began researching how to find the products in Denmark. She decided to open a website with products and guides for curly hair care to make the process easier for others. They officially launched in February 2019 and the reception so far has been overwhelming.

Nick sees the market in Denmark growing rapidly. He says, “People are becoming more aware of chemicals, the environment, and food. So maybe they want to make their hair more natural too.” He also sees interest across genders. “The method for hair is mostly about women, but we have a surprising number of men customers,” he notes. There are two active Danish curly hair communities, CurlyGirl DK and Curly Girl Metoden, where people exchange product and care recommendations, and share photos of their curl transformations.

Despite the growing availability of products that intrepid entrepreneurs are bringing to Denmark, there is still a striking lack of hair professionals trained to work with curls. Both Christina and Iman say that they cut their own hair because there aren’t yet any stylists in Aarhus that have been trained in doing curly cuts.

As of yet, there is only one hair stylist trained in the Curly Girl Method in all of Denmark! She is in Copenhagen, her name is Stephanie Vinther and her salon is called Vinthers Klippekælder. Stephanie says that she became interested in curly hair care in late 2018, after two clients persistently urged her to read about it. Stephanie was reluctant at first but, after a few hours of research, she says, “it made sense! Keep away from sulphates and silicone. I began my own Curly Girl journey and after three months, I felt pretty bad about putting that stuff into clients’ hair, knowing what it would do. I threw out all those products.”

Stephanie is a member of one of the Danish Curly Girl Facebook groups. She says every day people asked about stylists but there were none to be found. So she found a Curl by Curl course in London taught by Lorraine Massey in November 2018, and has since used the method in her salon.

The response has been tremendous. “It’s crazy,” Stephanie says. “I’m extremely busy but I love it! I love having a curly girl come in with frizz and straight ends from damage and watching her hair transform.”

When it comes to product availability in Denmark, Stephanie notes that there are a greater number of choices – more affordable too – but she thinks it will take a while for more hair stylists to come around. “We aren’t trained with curly hair. To stop doing what we know and try something new takes will, and hairdressers can be stubborn.” She is planning to go to New York in December for her Level 2 (Advanced) DevaCurl training.

While they aren’t necessarily trained in the Curly Girl Method or a DevaCut, there are other stylists in Copenhagen who are comfortable working with natural curls. Carriene keeps a running list of salons that she sends to subscribers of the I Love Natural Hair email list. The fact that there are so many new entrants to the market in just the short time that I have been in Denmark, suggests that there will be many more options to come.

Where can you find salons, webshops, and online communities for curly hair in Denmark? We’ve complied a list below: