The Cope Quarterly, the free magazine found in shops and hotels around Copenhagen, is a labor of love. “We produce it to do something quirky, something interesting,” says Editor-in-Chief Thomas Ørum.

Originally three lookbook-style magazines: N*Bronx, V*Bronx and O*Bronx (detailing the neighborhoods of Nørrebo, Vesterbro and Østerbo, respectively), CQ is now a combination of the three. The first of the bunch, N*Bronx, came out in January 2013. Filled with reviews of stores, cafes and galleries along with interviews, The Cope Quarterly is out to make boroughs of the city accessible to locals and tourists alike.

“There was a need for a magazine that covered local places in Nørrebro. Of course, we weren’t doing anything innovative in the content sense; there’s Vice and Bitchslap. And there was Where2Go but we felt the content was too generic. We wanted something that covered all the cool little places that was geared towards expats and tourists; so definitely in English. Where2Go has since shut down anyway, so we’re really the only ones producing this neighborhood-specific kind of content in Copenhagen,” Thomas explains. 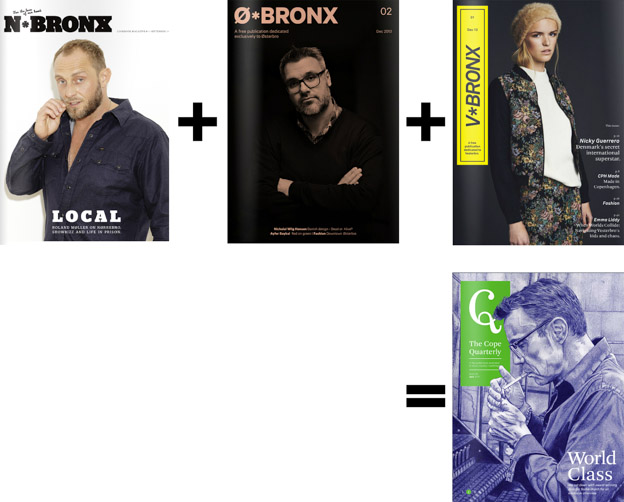 When he approached his co-workers with the idea of N*Bronx, there was initial push-back. Thomas laughs, “They were asking, ‘do you really want to do this? It will be expensive and time-consuming.’ And being me, that provoked me. It kind of pissed me off and then I knew the magazine would be happening.”

Thomas then went around to shops in Nørrebro to find out if they’d be interested in paying a small fee to be in the magazine. “Nine out of ten shops were willing to pay,” he says, “but they were wary about the cost. I decided right away that the cost of advertising for the stores had to be low enough so that independent shops could afford it.”

And Thomas has held fast to that rule, as well as a few others. “We don’t cover chains, we don’t cover big-business. They have enough advertising; this magazine is for the little guy. It’s something that is meant to give you a sense of the community, and which community businesses would be proud to be part of. That’s the whole point and if we can’t do that, we might as well not exist,” he says.

Almost immediately after N*Bronx being published, questions arose as to when the rest of the neighborhoods would get their own magazines. “Østerbro was an easy yes,” Thomas explains, “but Vesterbro took a bit of convincing. Eventually we were publishing all three. Then after just one issue of V*Bronx, we decided to combine.” Thomas says, adding, “that raised eyebrows because there was some risk that we’d become generic. How were we going to keep the neighborhood feel while being one magazine?”

As to why they’ve adopted the amalgamated format, Thomas tells me that the effort being put into all three magazines for each issue simply wasn’t sustainable. “Regardless of how small the magazines were, each one required different writers, photographers, artistic direction, writers,” he says. “I don’t expect to make money off of The Cope, but it’s essential to break-even most months. In order to do that, we had to consolidate.” So in March 2014, The Cope Quarterly was born.

So now that you’re not creating a magazine for each borough, how do you remain relevant for all three, I ask? “It’s a good question. What we realized is that although people live in and love their specific neighborhoods in Copenhagen, Copenhagen is a small city. No one only lives his/her life in Nørrebro. Therefore having the magazine be inclusive is actually a good thing. For tourists and expats, our target audiences, it’s equally good because it gives them some choices.”

I’ll be honest, readers: I co-edited the last edition of The Cope Quarterly and wrote a few of the articles. I know Thomas Ørum and it’s kind of hard to be in a room with him without a) laughing and b) engaging in least a smattering of office-inappropriate conversation. Since we first met, I’ve been pestering him with this question (and apparently he gets it a lot): if you’re a publication on Copenhagen, why all the articles on London? If you love London so much, why don’t you marry it, Thomas?

“Ah yes,” Thomas grins, “I get the point. But I also think that if we’re a magazine dedicated to expats and tourists, I want to throw in little gems about other places that I find interesting. For instance, our last issue had an interview with Bailie Walsh. There’s probably plenty of people that know his work, but they might not know who he is. It was cool to be able to share that.”

Thomas’s passion for the weird and wonderful is contagious. Much like the magazine itself, he’s a bit cheeky, full of fun and loves discovering hidden treasures; whether in his own city or in the rest of the world. It’s easy to see his personality translated to the pages of CQ.

It seems that other people into The Cope Quarterly vibe as well. “We’re in talks with a few cities to do a similar magazine. Like I said, it’s not the content that’s different. It’s the tone and the look that people are attracted to, so we want to bring that to any city that will have us.”

Issue #2, which just came off the press, is focused on food & film. I’m looking forward to seeing what Thomas is planning for the next issue; in the meantime, go out and grab a copy (for free, people!) at most independent shops around Nørrebro, Østerbro and Vesterbro. 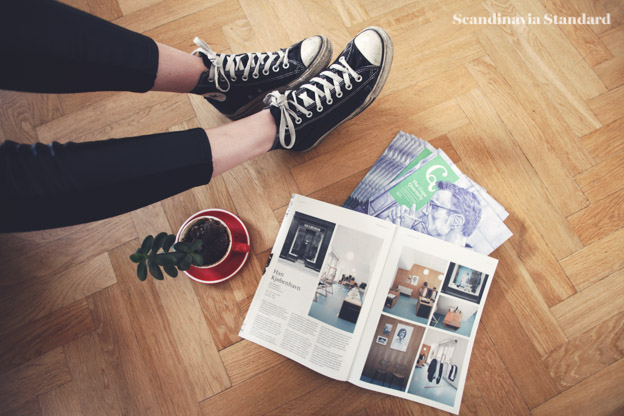