When’s the last time someone served you a pizza so big it had to be brought to you on a board instead of a plate? Was it recently? Was it ever? For me, it was a few weeks ago at Neighbourhood restaurant in Vesterbro, Copenhagen, and I’m kind of excited to tell you about it.

Neighbourhood, opened in September 2014, is working hard to live up to its grand-meets-casual name. When I visited one Friday evening a few weeks ago, I didn’t have much more than the online menu to go by. There’s been a throng of high-quality pizza restaurants opening in Copenhagen lately and, well, do we really need another one? It turns out that we do.

Pizza isn’t one of those meals you enter into without a bit of forethought. You don’t mosey into a pizza joint thinking, “I’m sure I’ll leave here feeling light and refreshed!” You are usually prepared to go home immediately afterwards, throw on your sweatpants and fire up the Netflix account.

NB: I am not hating on this as a life choice. It is one of life’s most wonderful pleasures, and I wouldn’t give it up for anything (also: substitute running sushi, burgers & fries or ice cream and you have the exact same situation. I’m an equal-opportunity couch potato. Mmm, potato). 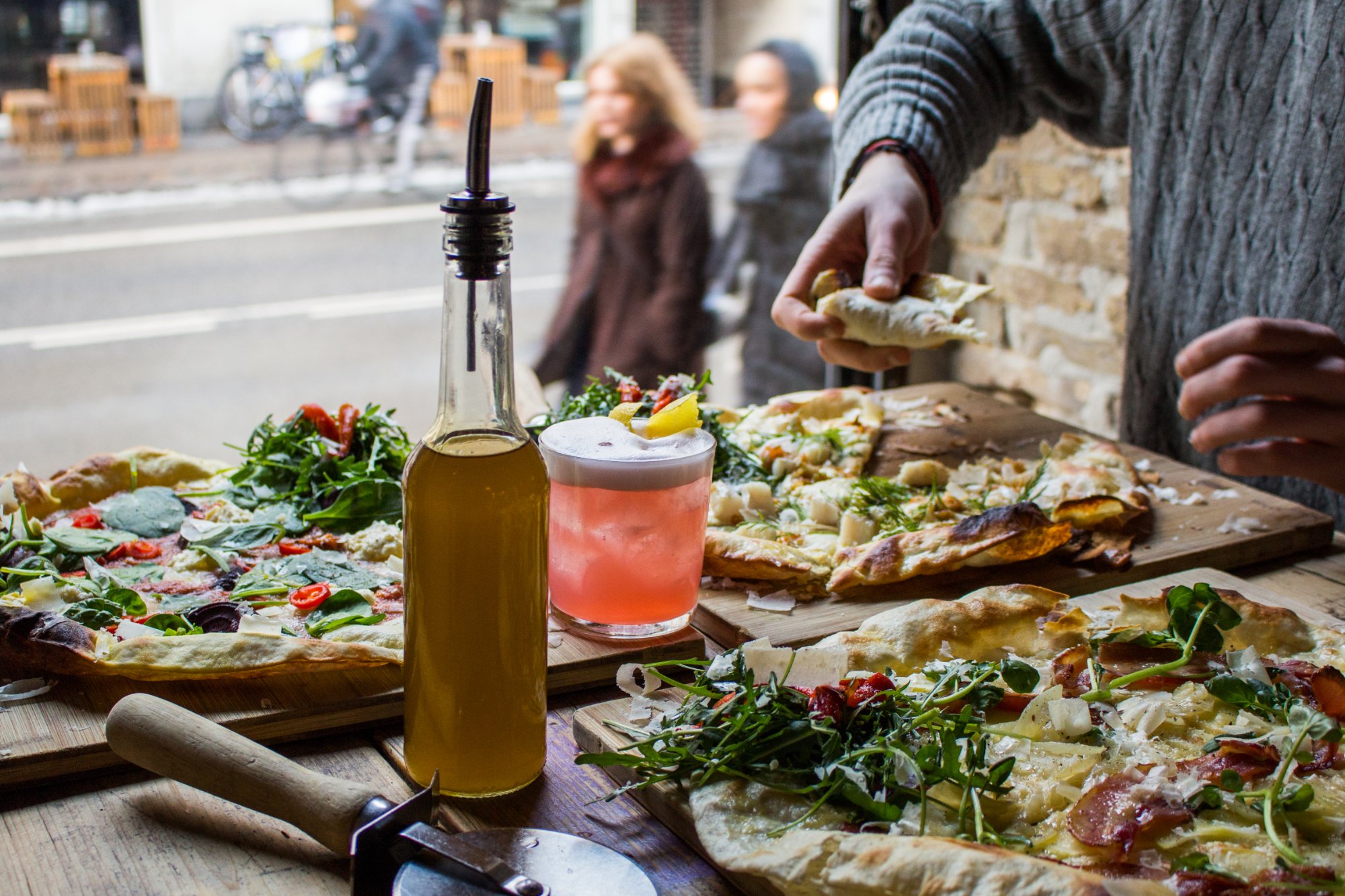 But just as often, you want a delicious meal that doesn’t leave you with an immediate food hangover. Now, thanks to Neighbourhood, this can be achieved through pizza.

You read correctly: you can eat a full pizza and waltz away in your tightest pair of jeans feeling 100% sexy. What is this sorcery? It’s super-thin crust pizza that uses a third of the dough of a regular base. The pizza is then loaded with seasonal, beautifully cooked vegetable and meat toppings, plus sauce and cheese. These aren’t the kind of pies you can eat by the slice – it’s a knife & fork deal.

“I wanted to create pizza, version 2.0. I wanted our guests to be filled with fresh toppings – not by the bread,” says owner Martin Beck Duedahl.

In addition to tasty, unique pizzas, Neighbourhood is known for their cocktails. Expecting simple rum ‘n coke style offerings, I was surprised to find that the drinks are mixed just as expertly as the pizzas are baked. Maybe that should have been obvious, given that cocktail development is led by Hack Kampmann, who has worked at Ruby & Lidkoeb, two of the best cocktail bars in the city, and Andrew Lyford, Bar Manager. We’re talking serious, interesting creations like Cu-cress Garden, a cucumber and cress-infused gin with lemon and egg white, served over ice.

…Right?! That sounds amaaaazing and I am thirsting for one as I type this.

Busy most nights, especially on the weekend, the restaurant interior is simple: wooden benches and tables that are shared by guests. It’s surprisingly non-invasive while still creating a strong sense of camaraderie with your fellow patrons. Located on the busy Istedgade in Vesterbro, Neighbourhood fuses casual dining with high-quality, organic and healthy recipes and excellent cocktails. Just more reasons to hang around the neighborhood.