“The thing about Ed Ruscha’s work,” Anders Kold says, “is that it’s very funny. For me, it will be most interesting to see how that humor is interpreted outside of an American context.” Kold is a curator and the Head of Acquisitions at Lousiana Museum of Modern Art just outside of Copenhagen. He has curated “VERY,” an outstanding collection of paper work by American artist Ed Ruscha, the first time these works have been shown together. The exhibition runs from 15th May – 19th August 2018.

All of the pieces in “VERY” have been provided by UBS Art Collection, a corporate collection with over 30,000 works; 56 of them are Ed Ruscha, making it their largest single artist collection. “We began collecting his works in the 1960s, before Ruscha had the reputation that he does today,” explains Mary Rozell, Global Head of the UBS Art Collection. “It was a big undertaking, to get these pieces from around the world. And Anders and I have had such an enjoyable time doing this together and speaking about Ed Ruscha. It feels like the right partnership because Louisiana is such an exquisite museum, and [curator] Anders [Kold] really understands him as an artist.”

The pieces certainly do look at home in the space. Divided into three rooms, the works include four prints of “Standard Station, Amarillo, Texas” (1963), “Evil,” (1973), “Gas” (1962), and a number of his books. It feels like a mini-retrospective, although Ruscha’s actual output over the years has been massive. Much of his work focuses on signage, typography, and motifs of Los Angeles. Interestingly, this hasn’t dated the work, because the Los Angeles landscape is the same to this day. 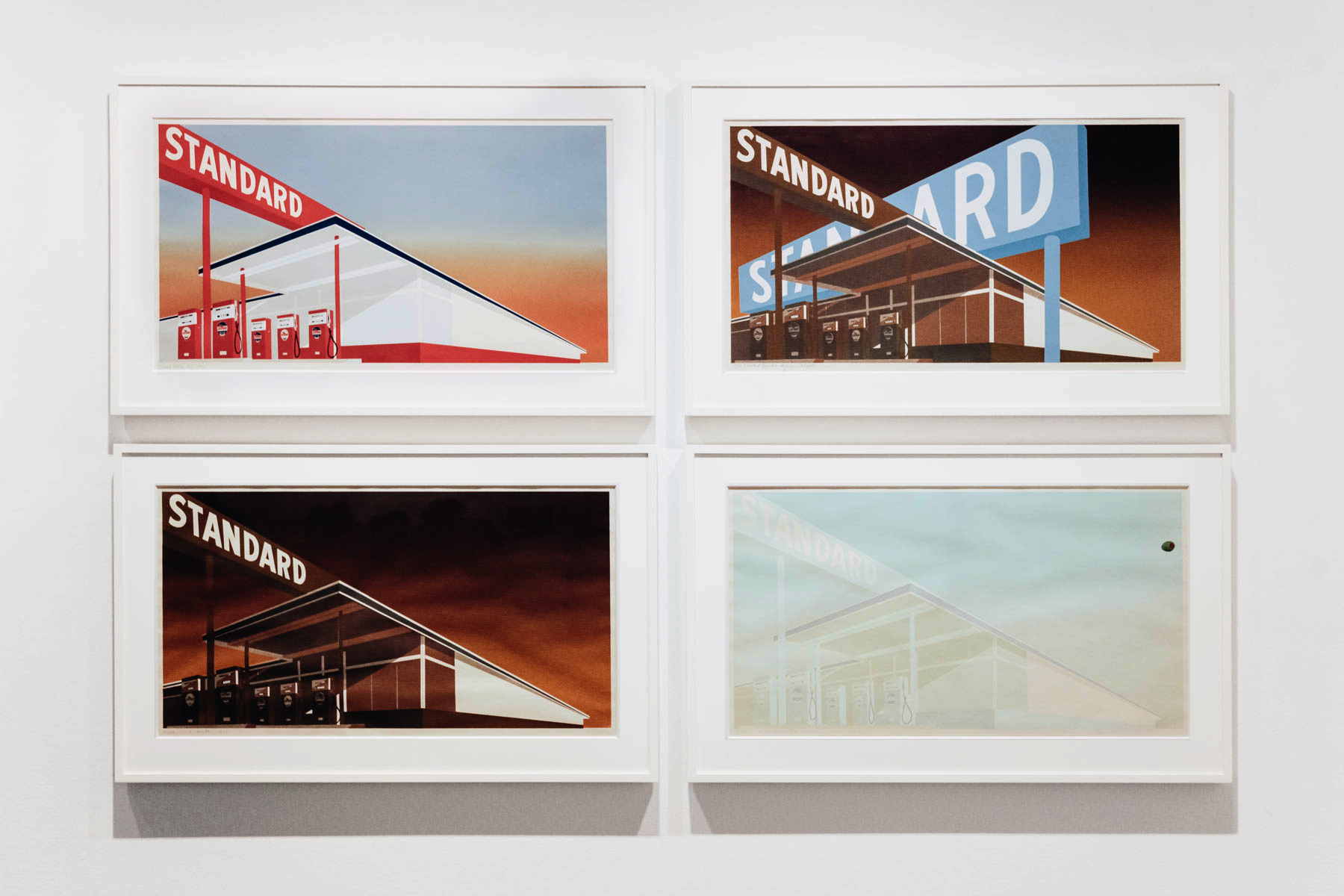 “I understand Ed Ruscha’s seduction by LA, and the opportunity of that city. He does embody Los Angeles, and he uses those motifs. His drives from Oklahoma City, his hometown, to Los Angeles, were really inspiring to him in terms of the wide open spaces. But I do think that Rushca is broadly an American artist and is a window into our culture. Although he doesn’t really fall into the category of pop art, he flirted with it and he does run parallel to it. He’s always been a bit of an outsider and a rule breaker.” Mary explains.

When I ask if that is perhaps what has kept Ruscha outside of the European body of knowledge, she considers. “I’m not sure. I think it is the humor. He’s also not someone who really goes around and puts himself on the stage. Some artists are really good at self-promotion in service of their careers, but he has never felt the need to do that. Art history will be catching up to him in terms of the international community.”

Born Edward J. Ruscha in 1937 in Omaha, Nebraska, Ruscha soon moved to Oklahoma City, Oklahoma, where he lived for 15 years. He studied at the California Institute of the Arts and upon graduation, worked as a layout artist for an advertising company. This work in advertising informed his style, and his playing with these themes and visual markers offers a sly window into American culture.

But Anders Kold doesn’t think that’s necessarily what Ruscha is trying to overtly communicate. “In the context of Europe, and Northern Europe, where expressionism has such a strong hold – the tradition of painting and layers of oil – means that Ed Ruscha will be seen as a very ‘cool’ fellow. He’s someone who doesn’t readily give away his position.

You can say it’s restraint, but not a restraint that’s aggressive or hostile. It’s one that allows us to be ourselves…He doesn’t want to be tied down, and he doesn’t want to tie our perceptions down. I think that’s very beautiful.”

Thanks to UBS Art Collection’s work to collect his pieces, and Louisiana’s space and curation, we can interpret Ruscha’s work as we like. It’s a unique look at a living legend; and his legacy will only continue to grow. 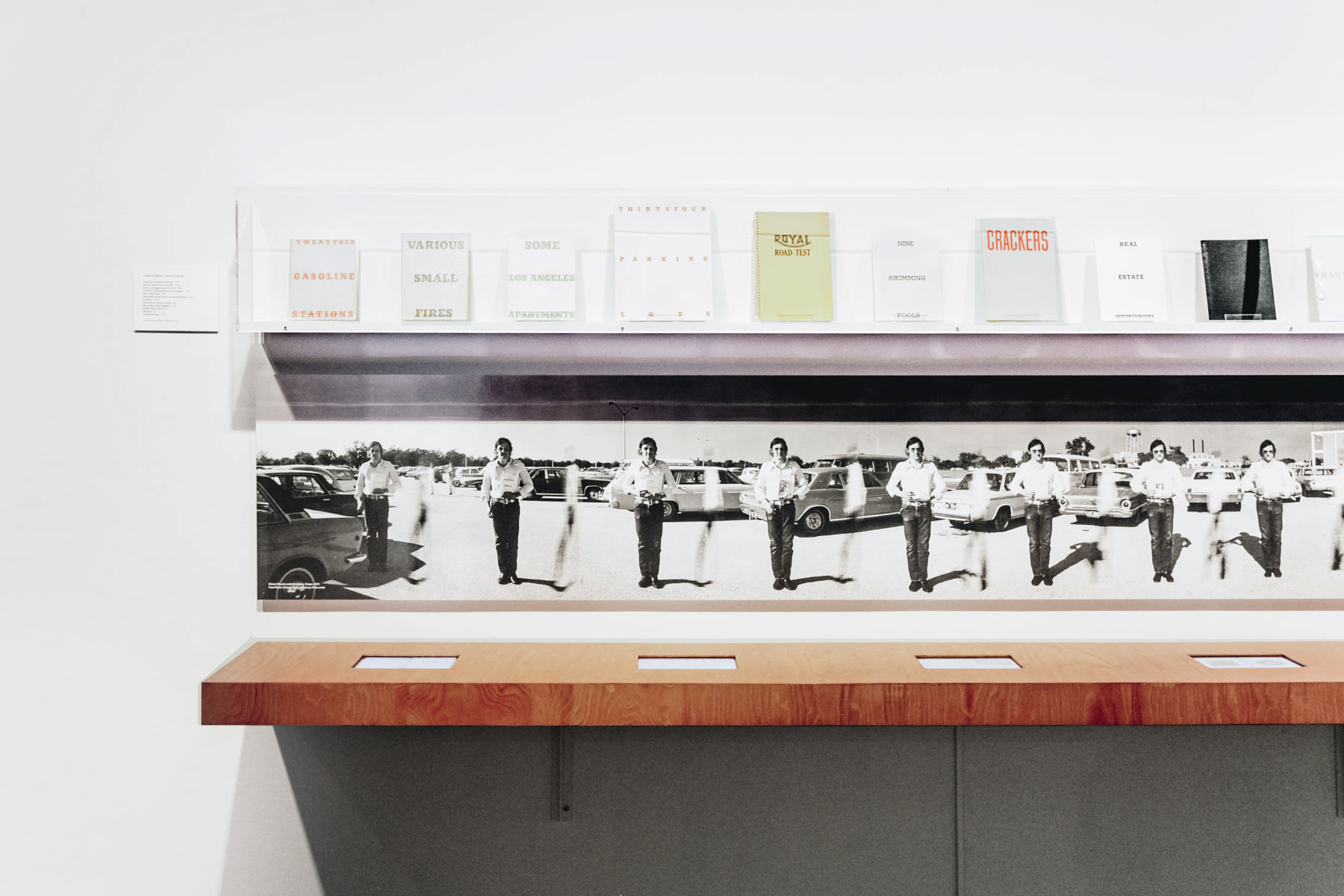 UBS Art Collection has what is called a “living collection”: they only buy art from artists that are living on the primary market, meaning they buy from the artist or the gallery representing the artist. “Occasionally we have to buy a piece on the secondary market [e.g. auction houses ] to fill out a collection, but we don’t do it often,” Mary says. “The mission really is to support living artists and collect the art of our time.”

And Ed Ruscha is certainly both of our time and timeless: his subtle humor, minimal aesthetic, and focus on craftsmanship rather than obvious meaning translate as both modern and enduring. Anders explains: “He was asked [in reference to his work, ‘VERY,’] why the word ‘very?’ And he said, ‘it could have been extraordinary but that was 13 letters. Very is only four. Four is easier.’ That’s completely Ed Ruscha.”

These interviews have been edited & condensed for clarity.

For more information on partnerships, please see our Disclosure Policy.