Danish artist Rose Eken aims to change the way we perceive everyday objects. She wants us to feel the importance of those objects through miniature modelling. By juxtaposing objects and by bringing back still life art, Rose creates narratives that trigger the imagination and memory of the audience.

Having graduated from London’s Royal College of Art, Rose is now prominent on the Danish art scene. Though she doesn’t assign a nationality to her work, the presence of Scandinavian cool is pretty obvious throughtout. Her infinite love for rock music translated into art is something that fascinates observers and reminds us that all expressions of art are bound to each other.

I grew up surrounded by art. My mother teaches opera singing so naturally there were musicians and artist in our house when I was a child. I left school at 16 and started working as a stage technician in a theatre, and at the same time making lighting design for bands on the Copenhagen punk-rock scene. I started drawing and art classes, and ended up applying to Edinburgh College of Art, where I got a bachelor degree. After that, I completed master’s degree at Royal College of Art in London; I graduated in 2003.

The 16 and 17th centuries were a renaissance period for still-life art. What genre is still-life for you and how does it apply to our century?

I have always looked at and drawn inspiration from at still-life paintings. Still-life is about staging objects – commonplace objects such as food, bottles, books, dead animals, skulls – and using the symbolism of these in order to tell a particular story. This is very much at the core of my practice: I reframe or offset objects in order to create a narrative and trigger my audience’s own imagination and memories.

You could say my work points to our desire to give meaning to the world around us. The way we project our personal stories onto objects and places, and create our own subjective reality. I work with flashes of memory, with moods and states of mind, fragments of individual and collective history that can be assembled into a picture of our past and thereby also point to how we perceive ourselves.

You like to use everyday stuff in your works like cigarettes, bottles and musical instruments. Where do they come from?

The period in my teens working as a stage technician has, in many way,s informed my work ever since. It instilled this fascination with the notion of space; with venues and theatres and the stories they tell when empty. These large dark spaces are made for an audience. When you work there during off-hours it’s just a big black (and usually smelly) space which kind of hovers. It awaits the audience. Awaits what is about to happen: the arrival of the musicians, the buzzing and talking, the gig, the ecstasy, the successes and failures that will occur on a specific night.

This idea of the moment just before or just after something happens, and this suspension of space fascinates me and feeds my work, as do the objects left in the spaces.

You translate your feelings about rock and punk music through art. How does music inspire you?

Music is an inexhaustible source of myths, clichés, tales. Music is fundamental in shaping us; it molds us in our formative years and makes us understand who we are as people. Music unites and music divides us. We have all had an argument over some band or other, or we have jumped up and down in front of a stage screaming our hearts out with 30.000 other people!

Through the transformation of the tangible world which surrounds us, I aim to draw on this idea of collective memories, on elements and symbols drawn from our shared modern music history and popular culture in order to visually evoke a mood that resonates with the viewer.

Your tinsel paintings are slightly different from the artistic language you generally use. Can you tell us more about them?

I don’t really see them as that different, but yes, tinsel paintings or reversed glass painting is a technique I came across when I was living in New York five years ago. I saw a show at the American Folk Art Museum called “Foiled” which inspired me; I adopted the technique after that. Tinsel painting is a technique that women used in the late 18th century. They painted on the back of a piece of glass leaving some areas free onto which they applied tinsel foil or glitter paper, making the most beautiful decorative and shiny motifs. This also created more light in their candle-lit homes.

So with tinsel painting you have to paint in reverse, i.e. the outer layer first. I like this impediment. Something is always out of your control because you can’t see exactly what you are doing before you are finished and reverse the images back. This allows for mistakes and frees up the process of working. More often than not the result is better when you don’t try to control everything.

You create miniature reality through art; how did you come up with that idea?

Ever since childhood I have made small things in cardboard and masking tape. I never really had a dollhouse. Rather, my entire childhood bedroom was a giant installation of miniature things I had made. I later started to use the miniature within my artistic practice – for example I have worked with slide and video installations but not filming the real world. Instead, I created small scale interior models which I photographed and filmed and in-turn projected back on a large scale.

I later began to focus on the individual elements in these spaces – a single guitar or a drum kit, for example – treating them as small sculptures in their own right. I’ve also made several pieces where I used repetition of the same thing or same type of object as a means to make the miniature seem monumental.

What do you think of clay as an artistic material?

The balance between creating an illusion and making it collapse at the same time fascinates me. Clay is good for that. You can model almost anything you want. It is such a versatile and very tactile material. It is dense and clumsy, and somehow it always reminds one of some inept Christmas decoration or ashtray–like object made in school. On the other hand, clay is also a very refined material – it is fragile and poetic and can be made into the thinnest objects or become the finest china.

To stick with the music reference, you could say that clay spans from the deepest bass to the highest pitch. I like that a lot. I always attempt to challenge clay as a material. I aim to preserve this dialogue between these two opposites pitches within the individual piece by stretching the material to its limit, making something very large or long and thin.

Do you think that your art is particularly Danish or Scandinavian? Why or why not?

No, I don’t necessarily think that my art is particularly anything that has to do with nationality – at least it’s not something I pursue – but maybe I can’t avoid it. I have lived outside of Scandinavian for a large majority of my life and am of course influenced by that, but obviously I am also highly influenced by upbringing and cultural heritage. I guess, someone else should really answer that question. It is hard to say from the inside.

What do you think of current Danish or Scandinavian art scene? Is it inclusive or hard to get into?

I think it is much more open and vibrant now than ever before. When I finished college back in 2003, it was much more closed off. But over the last decade or so the Danish art scene has changed a lot; is more international and much more open and definitely more ambitious.

There is a lot of interesting things going on, both in the established museum and gallery scenes as well as in underground or artist-run spaces. These days you can easily see shows or attend art fairs at a high standard. 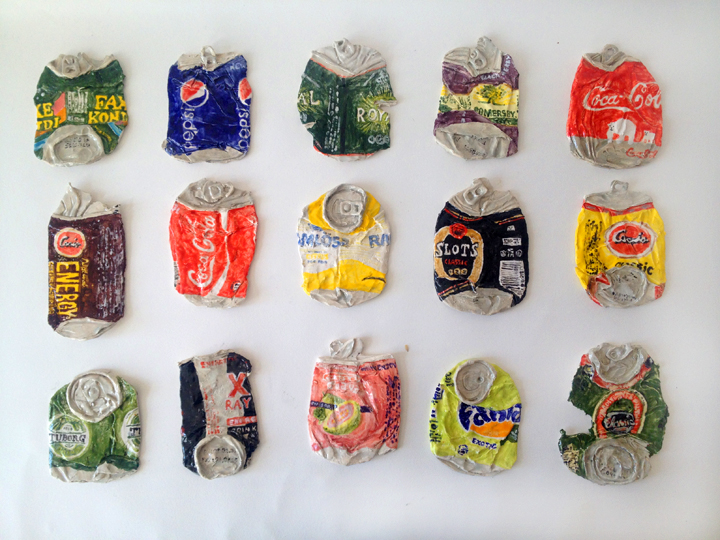 Tell us about your latest exhibitions:

Right now I am showing in four different group shows. Three in Copenhagen and one in Aarhus.
The first, “Engros,” is at the old grocery market in Valby, Copenhagen. It is a large scale in situ sculpture show with 60 participating artist spanning three generations. I am showing a ceramic installation of a scullery fitted in an old electrical cabinet with a ceramic sink, rubber gloves and Ajax cleaning products. It is on until 24 June.

The second is “Beers 5 – 100 Kvinder på Kro (part 3)” which is at the off-space CBG at the old Carlsberg Brewery. Here I am showing a small installation, also in ceramics, of a beer crate and a tray with leftovers from some workman or builder. This is on until the 29th of June

The third is the show “Horses” at the gallery where I am represented, V1 Gallery in Copenhagen. I have made a large installation with elements from the stable, complete with saddle, bridle, riding boots, horseshoes, carrots and horseshit.

Lastly, I have a large installation, “Tableau,” shown at AroS Aarhus Art Museum in the ongoing show “No man is an Island – the Satanic Verses,” open until January 2017

See more of Rose Eken’s work. You can buy her book, Artefacts, here.