“During my Masters in the Iceland University of Arts, my approach to art developed quite a bit,” Iceland-based artist Hugo Llanes explains. “At first, I was mostly working with time and space and site-specific art, and later I went into more political ways of doing art and performance.” Llanes moved to Iceland in 2018 to take a MA degree in fine arts, which he recently completed.

Llanes, originally from Xalapa, Veracruz in Mexico, is inspired by Latin American political art and the uses of subtle gestures to communicate or critique modern society. His way of creating art is broad, ranging from painting to performances and edible installations.

We met up with Llanes at his studio on the university campus and discussed socially engaged approaches to art and Llanes’s recent explorations:

Your work is very diverse, is there a common thread that you can pinpoint?

I come from a place where many things are wrong such as cartel violence, corruption, femicide, racism, and land dispossession, and you have to be constantly looking over your shoulder.

Some of my early work was not political, but I had a lot going on around me: I had concerns about being queer in Mexico City and issues relating to homophobia, gay-sex, HIV, and dating. Art was a way to escape.

All these issues have made me more sensitive to social dynamics, and have made me more political as a result. Often art can be very superficial, but I find it inspiring when art is used to communicate something. This is why I want to use art as a way to address political issues or social issues. 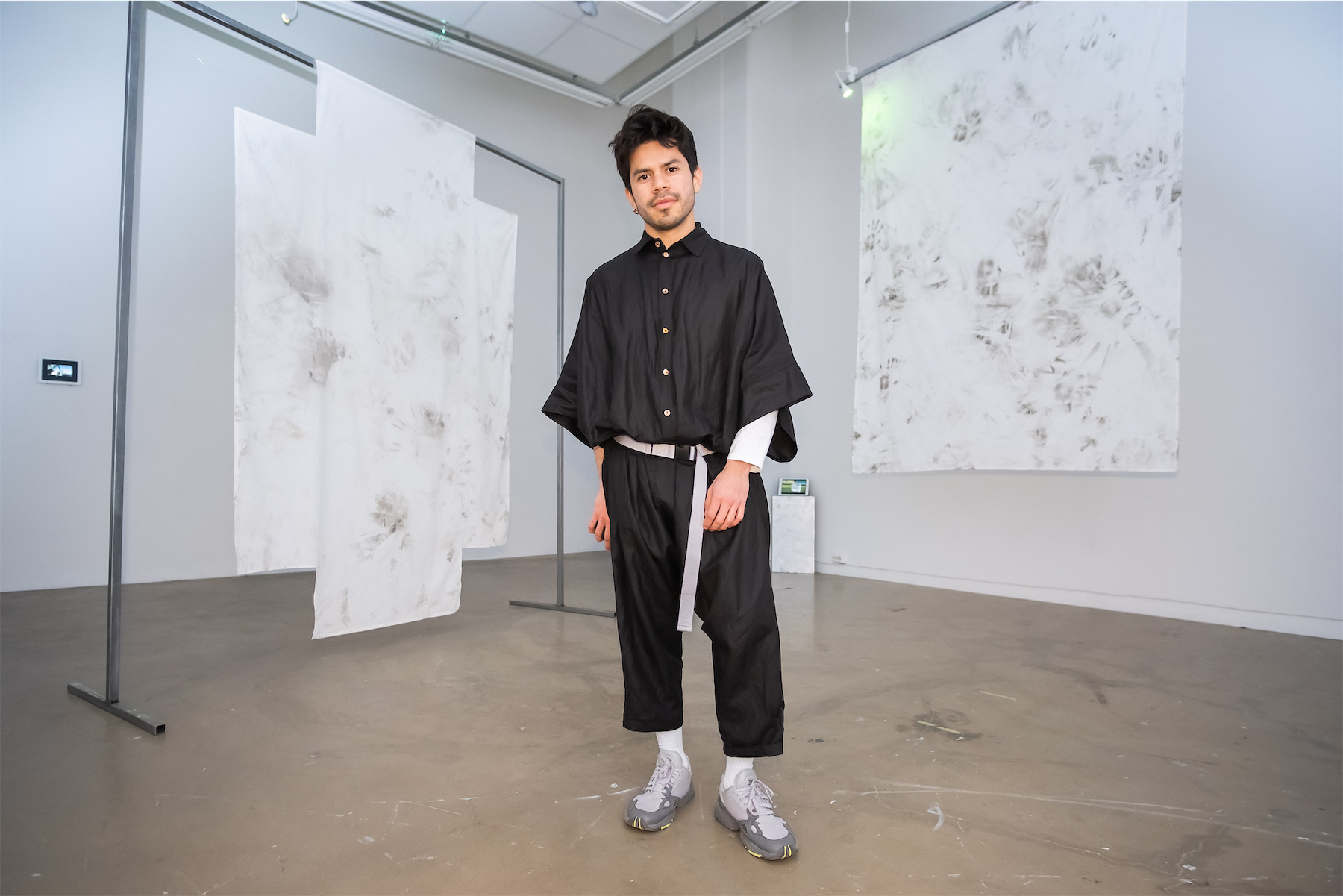 What methods do you use in your art?

It varies, but I’m interested in the participation of the viewer and engaging the community. The effect that food can have on the experience of art is also something I think about.

Many of my projects engage the viewer somehow, like Ideal Bakery, an exhibition where we reconstructed a bakery from Mexico City in a closed-down bakery in Reykjavík, in order to comment on the importance of historical memories and multiculturality in the neighborhood. 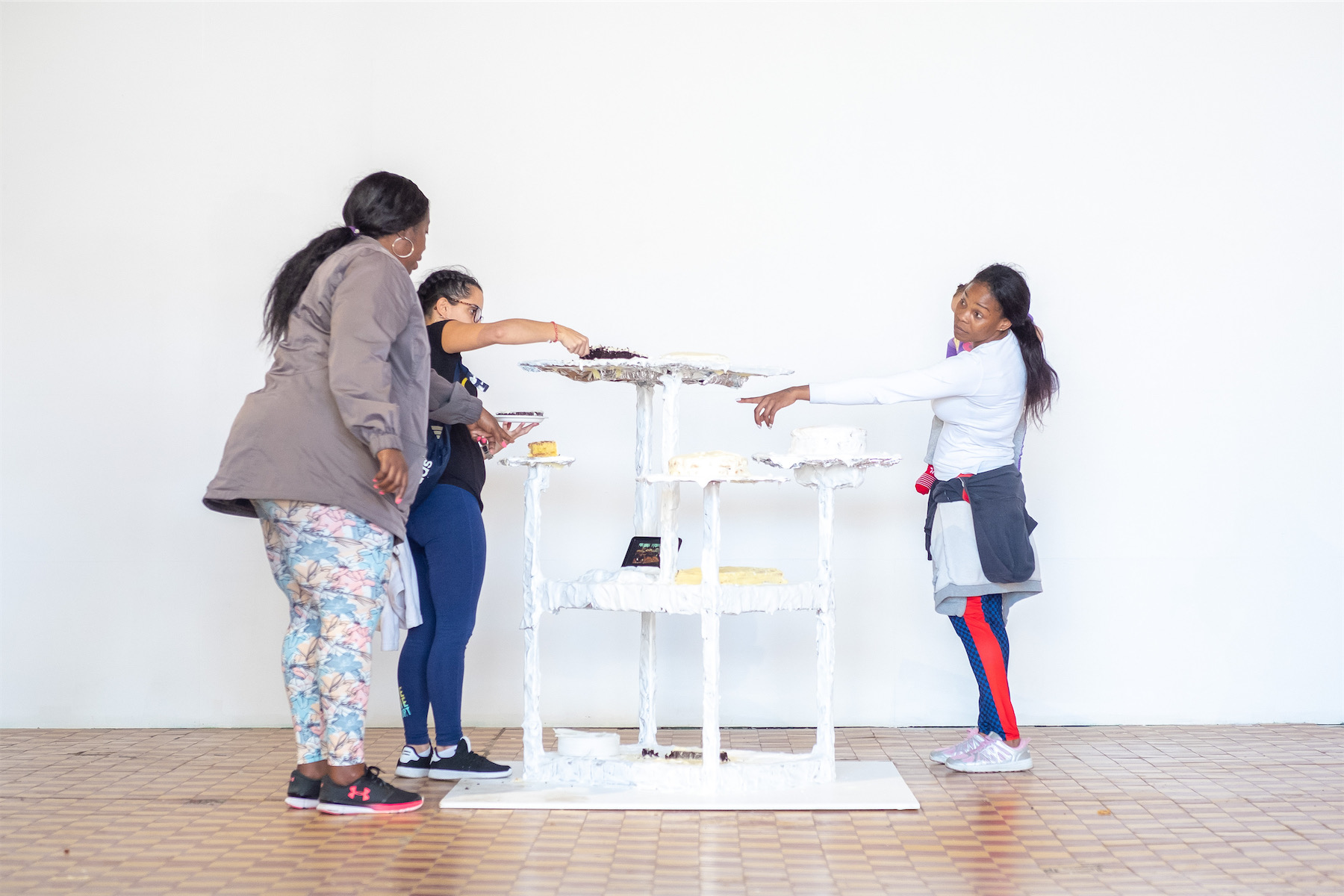 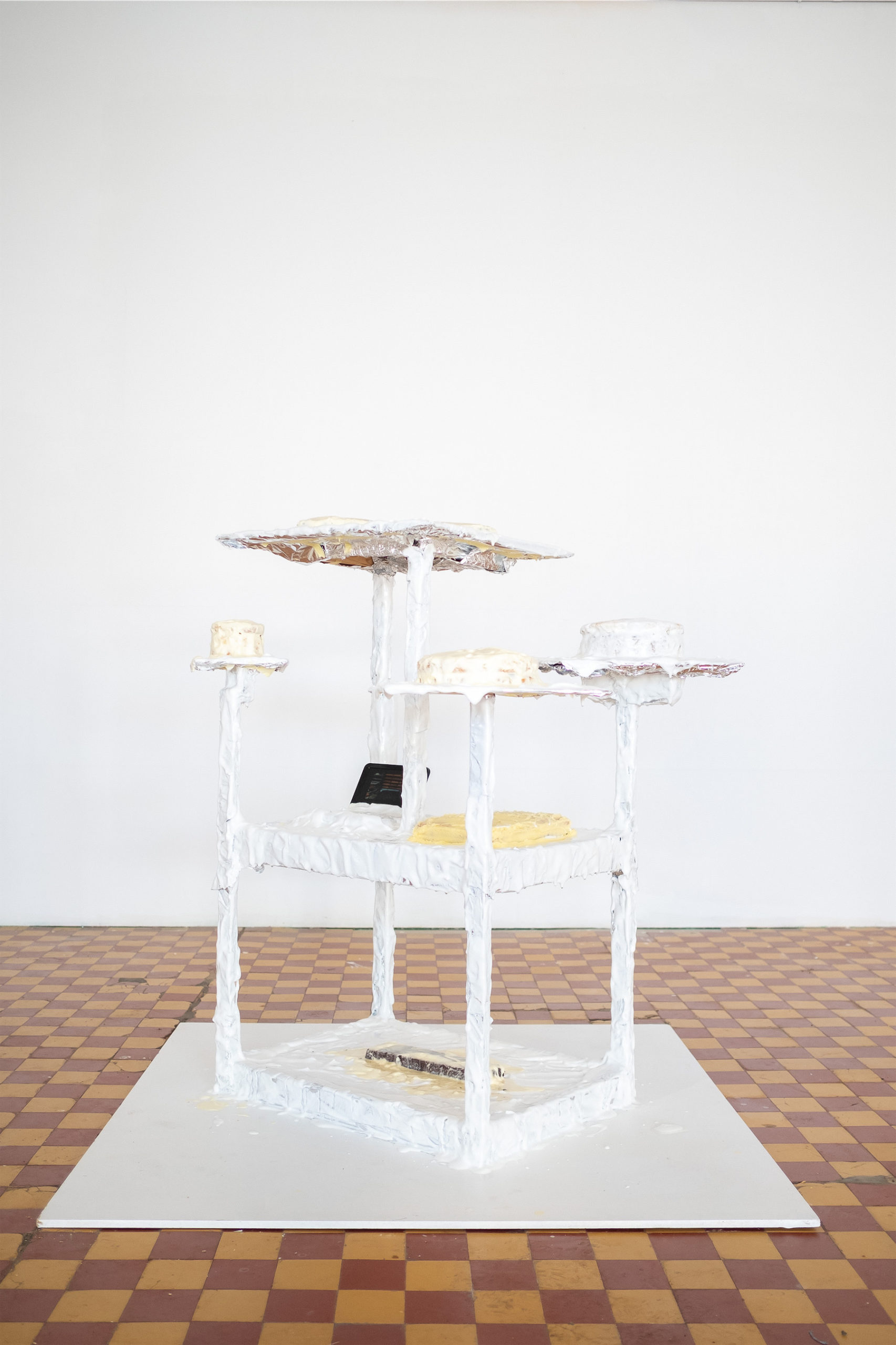 In my latest two projects, however, I’ve done more traditional collectible artworks like the Purgatory series and the gesture-based performance artworks of Monumental.

Can you tell me a little more about your latest art performance, Monumental?

The Monumental project was a political performance performed in Mexico. I rented a crane and cleaned parts of a large metal sculpture called La Araucaria (Chilean Pine) by Sebastián in my hometown of Xalapa, Veracruz.

The monument was commissioned in 2008 by the head of the state, who’s linked to a lot of corruption and drug cartels, the bloody criminal organizations in Mexico. He’s also been linked to embezzlement scandals from the government. The monument therefore symbolizes corrupt neoliberalism in underdeveloped countries and the social decay that results from it.

I wanted a way of using my body to address it. That idea came to me while working in a Taqueria in Iceland: I’m going to wash the sculpture as a gesture of political resistance! I used the crane to be face to face with the sculpture, somehow confronting it.

I asked my sister to help me rent it. I told her to tell the crane rental service that we were conducting research and that I was taking a sample from the sculpture to see how environmental change is damaging the monument – because it’s a meaningful sculpture, it’s part of our identity, ironically. Then I had to come up with a strategy to perform without altering the authorities. It’s a very hostile place for political art, journalism, or anything that criticizes the government – it’s not welcome in my hometown, my state, or Mexico in general.

The performance took place at 7 am when there were no authorities around, only people going to work. I cleaned the sculpture with white sheets for 15 minutes, as a reference to the dirt in the political system.

This also had a personal meaning for me and helped me forgive myself for not being there for my mom and my sister. I left for Iceland, which is safer and economically better. I left this hostile environment to study, so even if I’m not there per se, I wanted to do something meaningful.

The dirty sheets became extended paintings and were exhibited alongside a video of me cleaning the sculpture in Kubburinn Gallery in Reykjavík.

I also want to ask you a bit about your paintings, where did the inspiration for the Purgatory series come from?

The Purgatory series is in a “Works on Paper” catalog for Karen Huber Gallery in Mexico City that focuses on extended painting. Contemporary painting is often an extended way of thinking about painting. It is not like the work I usually do which is less tangible.

In the lockdown, I started to think about how we see this whole event and thought of it as a way to forgive. The series is called Purgatory after Dante’s divine comedy, as I thought that the beginning of the pandemic was like a kind of transition, or purgatory, which we would all have to suffer through, maybe leading to a better future.

What is upcoming for you?

Michelle Saenz and I received a RANNÍS student innovation grant to do a socially engaged art project, called home-made-home, about private vegetable gardening in Reykjavík. We will be collecting historical and contemporary data to develop a map and model to depict urban agriculture, which will be presented in September as an art zine. We know that around the socially engaged art sphere a lot of projects are evolving from within the community. We picture home-made-home not as our project, but something we are facilitating and mediating.

We are trying to approach art differently and rethink how art approaches the world. Starting from something outside of art, for example, the community gardening, and turning the information we gather into art. With this approach, art practice might happen in a more ethically or socially responsible way that makes more sense and is more coherent than if it were done the other way around.