“I think photography is easier to comprehend and relate to than other art forms,” co-founder and Executive Director of Copenhagen Photo Festival Julie Navne Klitbo tells me. “It is, or at least draws from, reality. I think people feel more connected to it for that reason.”

We sit on wooden crates in the center of the Carlsberg City building where one of the main photo exhibitions for the festival is being shown. Julie’s dog Oliver is curled at our feet, his leash wound round Julie’s foot and she leans back.

Julie’s path to photography started from a young age. “I collected Vogue magazines from, maybe, the age of seven. But it wasn’t the fashion I was interested in. It was the photography itself; how each picture created its own world, yet it was real. There was a part of it that was real. I was really interested in that.”

The child of Danish diplomats, Julie grew up all over the world before settling in Denmark ten years ago. Prior to her move back, she lived as an adult in Paris, New York and Los Angeles where she organized photo exhibitions and acted as an agent for photographers.

“I was never the one behind the camera,” she notes, “but photography has always been my love. So I sit on the other side of the table; I do the business stuff.” Once in Denmark, Julie started an agency wherein she represents a number of both prominent and up-and-coming photographers. While this is full time work, Julie quickly noticed something missing from the Copenhagen photo scene.

“It was so clear to me that Denmark, and specifically Copenhagen, was good at festivals. We have so many celebrations of so many different forms; art, film, literature, food. But for whatever reason, we didn’t yet have one for photography. I thought: that needs to happen. So I did a bit of research on who was doing similar work to myself and ended up meeting a man named Rasmus Ranum. Within 20 minutes of brainstorming, we had the Copenhagen Photo Festival. It took 1.5 years to get the first one off the ground so we’re now in our fifth year.”

The response has been intense; this is now the largest photo festival in Northern Europe. This year, the festival is made up of approximately 70 exhibitions and 20 events. Because of the dramatic growth, Copenhagen Photo Festival can’t organize them all; instead, they plan the majority while allowing others to take on the mantle and plan things themselves around the city.

“We’re very proud of the fact that most events are free,” Julie explains. “We want to embrace the diversity that photography already rests on; that includes race, age, even tastes of viewers.”

When I ask her to expound on this, Julie thinks for a moment. “When I started working in Copenhagen, there was an article in Berlingske that outlined how the average citizen feels that he needs an art degree to understand what’s in museums these days. That maybe art talks down to people. While I won’t say that we’re the main thrust of any change, our festival is definitely one that is about including everyone. Galleries tell us that more and more people are visiting during the festival, then coming back throughout the year. And as a result, galleries around Copenhagen are actually holding more photo exhibits. It’s beneficial for so many reasons.”

Although the festival is in Copenhagen, submissions are accepted from all over the world. “I think our exhibitions, and particularly our Censured Exhibition, are a really good starting point for understanding where photography is right now,” Julie says.

That includes less digital retouching, exploring space and older methods of production. Julie explains, “These are threads throughout photography internationally.” 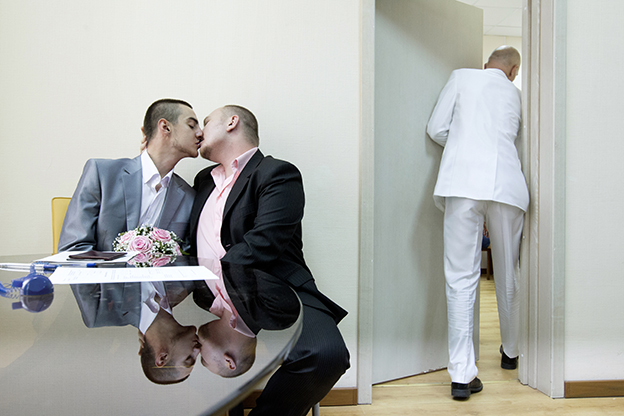 What then, if anything, separates Scandinavian photography from other regions? “Well, I think that we have a really good sense of ‘capturing,’ here. The root of all Scandinavian art form is related to light and a lot of that comes through in our photos.”

While the festival runs from 5-15 June, most of the exhibitions run much longer than that. The exceptions are the exhibitions at Photo City in Carlsberg, which do in fact close on 15 June. It’s a wonderful gallery at Bryghuset; 70 pieces from 35 artists hailing from 20 countries. And: it’s free! I encourage everyone to go see it before it’s over. Some of my favorites include two pieces from the series “Passing” by Danish photographer Ida Arentoft and the Tokoyo-GA series by Italian photographer Gianluca Gamberini. In addition to the photos, this is a great chance to see the insides of the historic and fascinating Carlsberg buildings.

Another recommendation for the festival is Personal Projects consisting of seven of the best Danish documentary press photographers showing personal series. It’s a treat not to be missed and, luckily, runs until 27 June at Øksnehallen in Vesterbro (entry is 25 DKK).

It’s so easy to be a “photographer” these days; we have our phones, apps and filters that make taking a good quality photo a no-brainer. It’s inspiring to be reminded that there is an art to this medium as well as a storied history; Copenhagen Photo Festival aims to bring that narrative to the city. We’re looking forward to seeing as much as we can and hope you will too!

You can see the full schedule of exhibits and events here.