In the offices of Blink Production, managing director Julie Navne Melchior is recalling photo shoots from the beginning of the millennium. “It was another era back then,” she says with a grin. “That’s when you could have helicopters on set and budgets for cool special effects like snow and fire – it was magical.” Amid this heady scene, Julie began aiding photographers with their global operations.

“I learned everything I know, more or less, from this agent in L.A. – an experienced Japanese lady called Yasuko,” she explains. “At the time, she was representing some of the country’s greatest photographs, facilitating their campaign and editorial shoots.”

Julie continues: “That was in the early digital age, so our location archive was spread across folders. Everything was analog, so they were compiled from Polaroid photos of numerous settings.”

Back in Copenhagen, she became a partner at Blink Production, which represented Scandinavian photographers. Julie employed her skills as a location scout after becoming the Managing Director.

“Since I had worked so much with locations in L.A., I guess my eye kind of developed a new way of seeing,” she says. “I couldn’t walk along the street without crawling over a wall or sneaking into a backyard; I just always needed to view what was there.”

While Blink now has thousands of international locations on its books, Copenhagen often features in their photographers’ work. Julie’s location manager and scout, Ida Harbou, gave me backstage access to some of their popular shooting destinations.

Join us on a tour of Copenhagen, through a location scout’s eyes:

I join Ida in the center of Copenhagen’s lively meatpacking district (kødbyen). The functional warehouse architecture, emblazoned with neon signs, seems ideal for photography. But she guides me to a back alley where the restaurants and nightclubs take deliveries.

Stopping beside a loading bay, Ida points to the site of a recent shoot for clothing brand Jack and Jones. “Our Meatpacking district location is often in demand,” she says. “We have special permission to use this spot where you can get that gritty feel without the presence of people and store logos, which you generally don’t want in a frame.”

She adds, “this space also has different levels,” motioning to the staircase. “So you can get a full figure image and close-ups with the graphic blue and white lines in the background.”

Just a stone’s throw away, the older “brown meat city” offers a similar aesthetic, with the addition of cobbled stone roads and short-framed industrial buildings.

Jumping into Ida’s car, we soon exchange the city’s bustling boulevards for the farmlands of Sothern Amager. Within twenty minutes, we’ve arrived at the coastal town of Dragør.

“This place has a really romantic, idyllic ambiance, often found among seaside villages,” Ida says as we walk through the streets. “You’ll see Danish summer at its best out here.”

The fishing boats that gently chug in and out of the harbor complement this scene. But Dragør’s most evocative feature is its thatched roof houses, each painted with a distinctive yellow pigment.

“There are a few places in Copenhagen where you can find similar colors, but here you can have it more to yourself, so there are many possibilities for shoots,” Ida explains.

“The town’s layout has stayed the same for years,” she adds. “So if you want a location with that really old-fashioned Danish sense to it, this would definitely be a good option.”

Following the coastline, we arrive at Kastrup Sea Bath. Created by White Arkitekter in 2004, the modern design has secured iconic status, both locally and around the world.

“Sea baths are often found in Scandinavia, and especially in Denmark as the ocean isn’t that wild,” Ida says. “But the use of wood here is something very unique, and it’s not easy to replicate in other countries.”

Blink photographer Anja Poulsen recently chose the sea bath as a backdrop for an editorial shoot. Its elegant curves and weathered materials are sought-after visual elements.

“It naturally gains this [grey] color from the sun, the ocean, and the salt,” Ida explains. “You can find this on household terraces, but it’s unusual to view it in this context.”

The sea bath also provides exceptional views of the Øresund bridge and Sweden’s nearby coastline.

Driving back inland, we pull into Refshalevej, close to Christiania’s perimeter. “For photography, this is the closest you can get,” Ida says as we step out of the car.

The self-governed enclave, often a site of illegal cannabis sales, does not permit the use of camera equipment. But the semi-abandoned anchorage, found within earshot of the commune, offers another way to capture its essence.

“The old houseboats out on the canal provide an interesting contrast to the more modern architecture in the background,” Ida says. “Magazines and fashion brands come here for that rebellious vibe.”

I suggest it’s uncommon to find a fallow parcel of land, such as this, close to the center of a European city. “Some capitals in Northern Europe have areas with a similar feeling,” Ida responds, “but I doubt many of them would allow these kinds of places.” 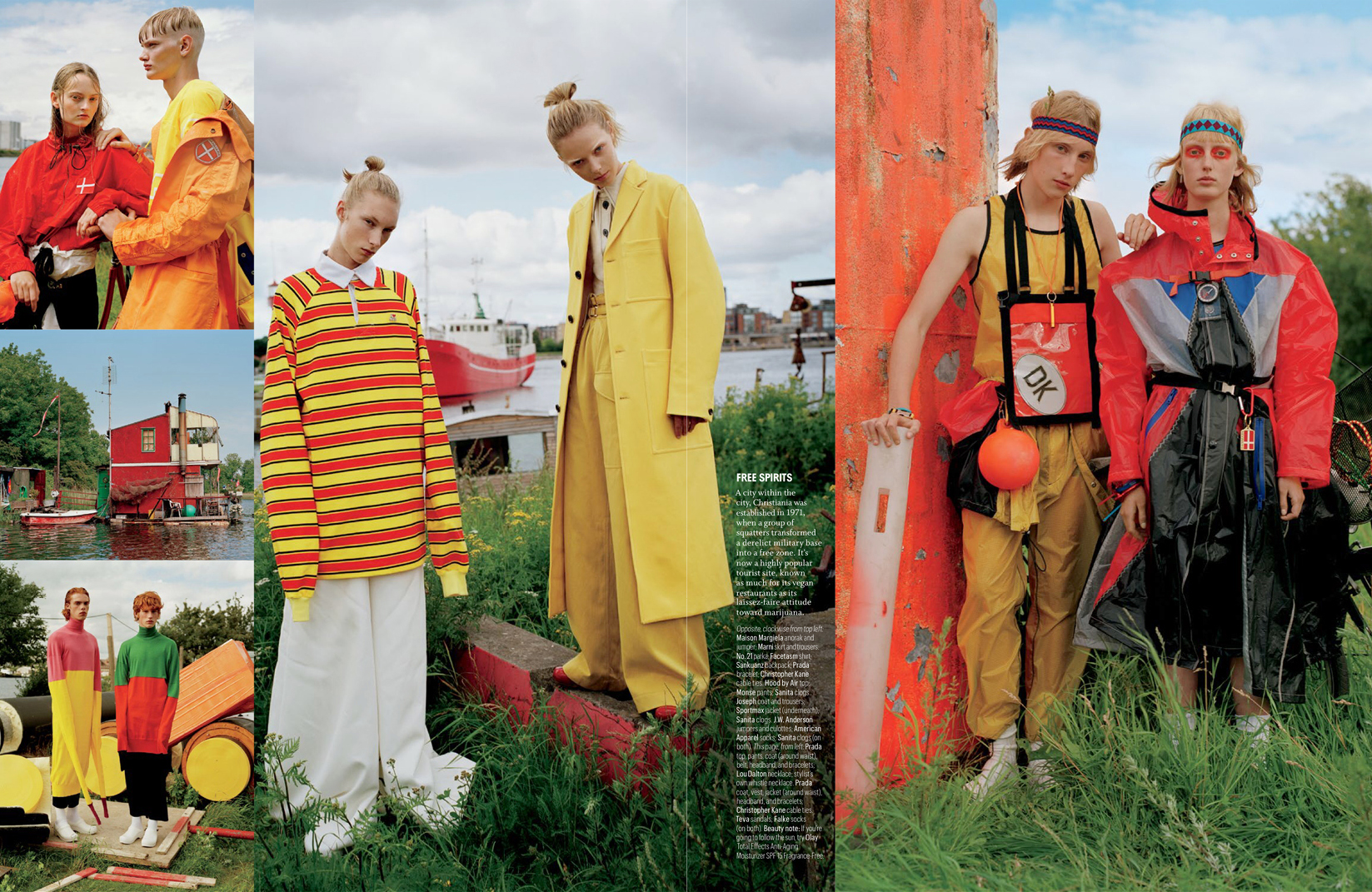 The sight of the old Burmeister & Wain warehouse marks our arrival on Refshaleøen. After shipbuilders abandoned the area in 1996, the availability of cheap land attracted an influx of creative workers and new enterprises.

“A lot of artists use this place for their ateliers,” Ida says, “so it has this really creative feel to it. It also has some really nice restaurants,” she adds. “A lot of them are in keeping with Refshaleøen’s post-industrial character.”

Ida shows me to a site that photographer Tim Walker used for a fashion shoot during the summer. Rough terrain, cracked windows, and rusting metal are all hallmarks of this setting.

“Copenhagen has a number of these places that are engaged in a process of redevelopment,” she says as we pass a corroding diesel generator. “But these locations give a sense of freedom, and that’s what you’ll get from the pictures.”

We re-enter the inner city on our way to Nørrebro’s Superkilen park, our final stop. Arts collective Superflex designed the public area in collaboration with Bjarke Angels Group. Superkilen opened in 2012 and is home to numerous outdoor facilities.

“A lot of people who come here want the look that you often find at skate parks, along with some primary colors and different shooting angles,” Ida explains.

We head to one of the locations in question: a basketball court doubling as a skate bowl that Blink photographer Petra Kleis used as a backdrop for a Levi’s x Hypebeast campaign. On this day, kids and students are its primary occupants.

“This is one of the cool outdoors hangout places in Copenhagen that incorporates ultra-modern design principles,” Ida says.

“A location like this will give you that on-trend city look,” she explains. “But it’s also a versatile setting, and my job is to think beyond the obvious – to see how these elements can also work for our many different clients.”

Want more fun things to do in Copenhagen? Check out our list of tourists sights you should probably visit!