For Malene, jewellery was never just about gems and other shiny adornments. In fact, the self-taught designer confesses to not really having worn a lot of the stuff herself.

“I wasn’t really into dressing up in a lot of jewellery,” she laughs.

Instead, the Copenhagen-based Malene Glintborg attributes the dogged determination with which she entered the glittering world of jewellery-making to a simple love of design and the desire to create.

“I needed to do something based on intuition and aesthetics, and really get my hands on something; have the idea, perform it, sell it and be in complete creative control,” Malene explains.

Having initially trained as an architect at the prestigious Royal Danish Academy of Fine Arts, she then spent four years working at a design consultancy firm in Copenhagen before deciding to pack the 9 to 5 in.

“It was about ideas, but not so much the craftsmanship,” she says of her previous life. But having only dabbled in making bits and pieces of jewellery as a teenager, the daunting task of setting up as an independent designer soon hit home. So Malene drew from the technical skills picked up at the Academy and after just one week of an intense jewellery making course and two internships spent shadowing local designers, she was ready to go it alone.

“I thought ‘I can already make something that I would wear, so maybe someone else would.’”

And turns out they do. After setting up her eponymous jewellery brand back in August 2010, Malene now boasts celebrity clients such as singer Mette Lindberg.

Much of the inspiration behind Malene’s pieces comes to her organically — the result of long conversations with friends. Describing the story behind the X-tra Ring, she explains how her fascination with a chair that led to the ring’s conception.

“I got the idea from a friend that made a chair from a criss-cross principle. So then I wondered, how do I create a piece of jewellery around that?”

This collaborative approach to creation isn’t all that surprising when you consider Malene Glintborg’s studio and shop sits on the busy Nørrebro thoroughfare Jægersborggade, home to an eclectic mix of independent designers and stores.

Even before setting up solo on the street in the summer of 2016, Malene was one fifth of jewellery design collective Ladyfingers, which now sits just a few doors down from her own retail shop.

“It’s a lot of hyper-local people. 50% of the shop owners on the street also live in the area so it’s a great sense of community,” she says of the neighbourhood. “And then the tourists have discovered it as well. It’s a good combination of things.”

Sleek minimalist design is a celebrated characteristic of the Danish jewellery market and it can be difficult for young designers to set themselves a part from the crowd. But Malene strives to ensure her handmade pieces are all completely individual, distinguishing her brand from others. They are also fairly affordable for handmade pieces; a pair of earrings start at around 250DKK.

“It started out with the rings for the Loop collection. Every time I created it I would bend the ring slightly differently, so every one is a little bit individual.”

“People come by my shop and select the combination of gems for the Solar Ring. It’s like a pick ‘n’ mix,” says Malene.

Pick ‘n’ mix of the gold and silver variety? We can definitely get into that. 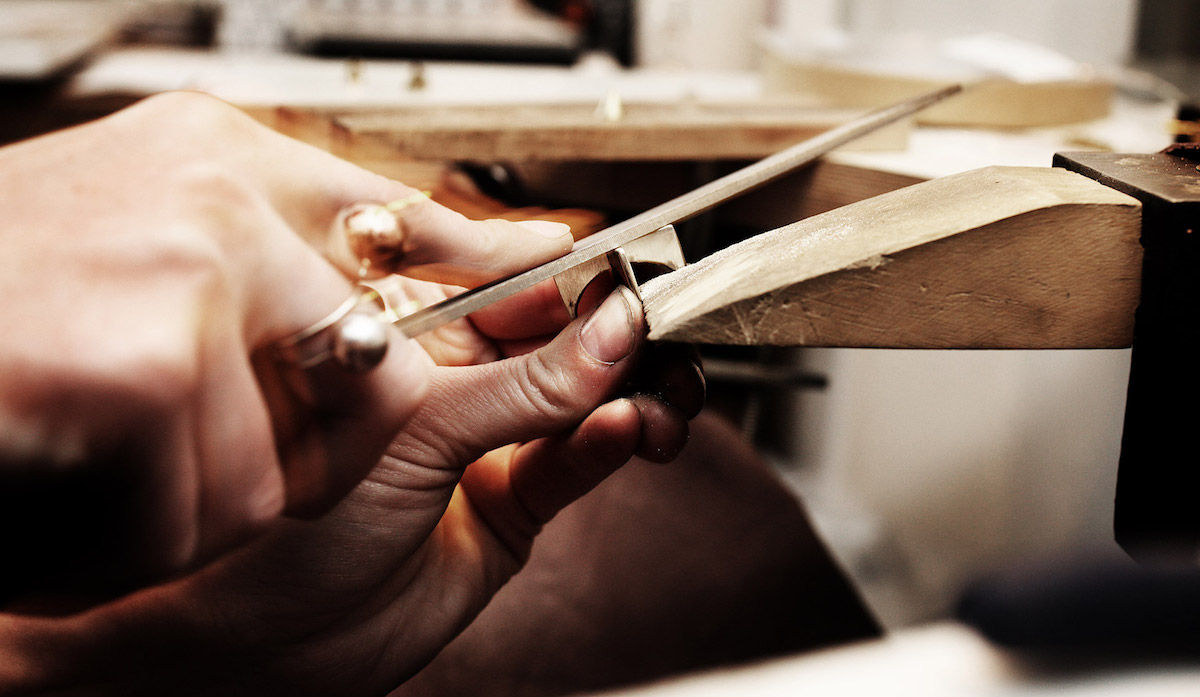