After months of darkness spent marinating in a selection of Netto’s finest cabernet sauvignon my first inkling of summer comes when music festivals release their line-ups. Each ticket becomes a ray of hope – a reminder that soon the cab sav will be swapped for boxed rosé, guzzled down in a tent of questionable structural integrity as you gear up for yet another day of sweat, grime and musical bliss.

So I was pretty keen when Scandinavia Standard’s Creative Director Freya asked me to join Northside Festival in Aarhus.

While Copenhagen may be the gateway to the renowned rock’n’roll piss-up that is Roskilde Festival, Northside is slowly gaining traction as its more polished cousin. Set in an inner-city park and with no camping option, attendees arrive bright-eyed and showered, while the overall vibe of the place is several notches closer to the ‘chill’ scale of festival intensity. Precisely the way I wanted to ease into the season. There was just one catch, the not-so-fine print at the bottom of the email:

Danes boast about having Europe’s flattest country after the Dutch. Conveniently, Denmark is also a small country made up of several islands, so a cycle northwards only involves cutting across the island of Zealand, where Copenhagen is located, before hopping on the Aarhus-bound ferry at Sjælland’s Odde, the region’s northwestern-most point.

Freya and I pride ourselves on meticulous trip planning, which means that we didn’t think about it for weeks and then solicited Facebook two days prior to the trip for route advice. My experienced friend Hugh tried to gauge our skill level in order to tailor his advice:

My other friend Lewis suggested that we take the train to Højby and cycle like champs the rest of the way. I looked it up. This is what he meant:

Lewis, needless to say, was not a believer in Lena and Freya’s Northside Tour.

It also quickly became apparent that my lovely city bike was not going to cut it on a cross-country run. We sorted more suitable chariots from Batavus, who have a range of light and speedy racer bikes. This cycle felt practically weightless, which was critical, as our burgeoning Eastpak backpacks were…not. The backpacks were deceptively small. In that, they appeared compact but actually transpired to be so roomy that I crammed in twice the amount of stuff I’d planned while my back paid for it all the way to the festival.

Meanwhile, an otherwise sunny week had rainclouds looming on its horizon for exactly the two days we had planned to hit the road. We opted for trusty Stutterheims, a Swedish raincoat which actually knows how to keep its wearer dry (I’m looking at you, Roskilde poncho 2011).

We did plan one thing in advance: matching lunchboxes. We excitedly picked up these bad boys for 30 kr apiece at Tiger and I’m fairly certain that I spent more time curating its contents than I spent packing my luggage. 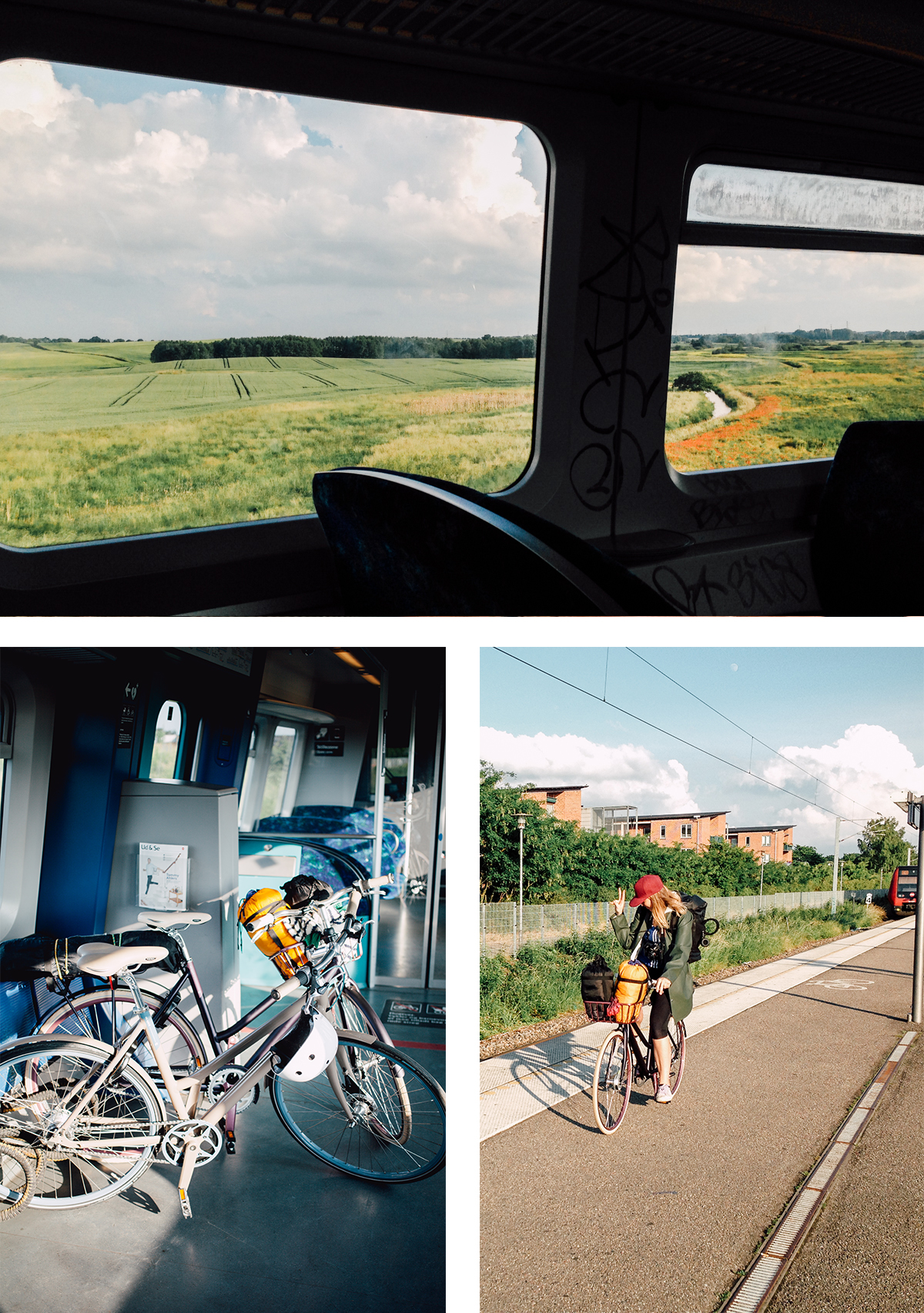 Full disclosure: we didn’t cycle all the way from Copenhagen to Sjællands Odde. Unexpected delays that meant we didn’t set off on our two-day adventure until…6 pm.

To make up for the lost hours, we caught a train out to Frederiksund, a town nestled halfway up the Roskilde Fjord. We had optimistically booked the 1pm ferry to Aarhus for the next day, so the evening became race get as far as possible by the late-night sunset, which sounds kind of like a Richard Linklater film but without the sexually charged banter or Ethan Hawke.

Given that we had limited light hours to work with, you’d think that we’d cycle steadily with a target in mind. Nope. The scenery was so bewitching that we abandoned all plans and stopped to admire everything. The fields of poppies and lavender. Cows. Horses. Jams and strawberries for sale outside front gardens.‘The Three Amigos,’ a makeshift Spanish wine bar situated on a long stretch of nothing on the outskirts of a town, which had exactly three patrons sitting solemnly on upturned milk crates outside. And all of it framed by the dazzling fjord to the west.

The idyll was interrupted when I inexplicably crashed into the ground. It’s a testament to the raincoat that the flesh on my arm was completely scratched up while the garment sustained zero injuries. Freya pulled me up, but not before taking pictures, adding helpfully “you’ll want to look at this later.”

Nightfall loomed and we knew we had to find a camp. We cycled past marshes while mists swirled through the surrounding fields. “It’s like something out of Lord of the Rings,” breathed Freya, entranced. To me, it looked more like the opening credits to every horror film, ever. We arrived at a free shelter nestled by the harbor at Lyneas just as the sky plunged completely into darkness around 11 pm, quaffing down our lunchbox contents and wine by the moored boats on the Isefjord.

On day two, we discovered that Denmark is not in fact the flat country Danes claim it to be. We started off in high spirits, with breakfast at a charming Hundested teashop which served up filter coffee in dainty floral cups. The momentary lapse into whimsy was short-lived. Past Rørvig, the hills began.

Panting and sweating, we realised we’d have to fork out the hefty fee to swap our tickets to the 4pm ferry. Even that turned out to be a tight deadline, which is how we learned that Google Maps gives more credit to our cycling speed than we possibly deserved.

Haunted by my crash, I slowed us down additionally by inching carefully down each hill. I felt completely unsteady, as if I could be thrust forward over the bike at any minute. “Are you using both handbrakes?” asked Freya, finally.

“What do you mean, both handbrakes?” I asked. I’d been exclusively gripping the left handbrake. The city bike I was used to only had footbrakes.

And that’s how I discovered that I actually had two handbrakes on the very last leg of the journey and that I’d been doing a Very Dangerous Thing.

“Remember Lena, you’re doing this for Beck,” said Freya, navigating with one hand on her phone as I willed my burning thighs up another rollercoaster of a hill. My watch read ten minutes to four and I was certain we were pushing ourselves to breaking point for nothing. We were still cycling past dairy farms, with no sign of a harbour on the horizon.

And then! With five minutes to go the port loomed ahead and without missing a beat, we raced our bicycles right on to the ferry. We were too tired to even exchange high-fives, and far too sweaty to be in the company of other ferry passengers. Without a word, we joined the lengthy snack queue in the ferry kiosk.

…for the goods that kept us going!

Have you taken a long cycle trip? Tell us about it in the comments!