This is a thing. Did you know that this is a thing? The Swedes eat a lot of crayfish in August as a time-honoured tradition. They celebrate this crayfish festival by eating mountains of crustaceans, drinking bottles of Aquavit liqueur while wearing very silly hats and singing very silly songs. Don’t you just love Sweden?

Here’s a breakdown of all the traditions in a kräftskiva – that’s crayfish party for the non-Swedes:

First ingredient for a stella crayfish party is, yep, you guessed it, crayfish! Sometimes referred to as a Swedish lobster, these freshwater crustaceans are known as crawfish in the US. They’re bigger than a prawn and meatier than a langoustine. Until 1994, it was actually forbidden to fish for crayfish until the first Wednesday in August. Naturally, Swedes celebrated the season by eating as many crayfish as possible, and generally going cray cray (never gets old, I promise). The tradition remains, and we’ve reaped the benefits of silly songs and silly hats. Rejoice!

You eat crayfish cold, with your fingers. Sucking noisily to extract the juices is perfectly acceptable behaviour, even a little encouraged. Take a crayfish, suck the juices out from its belly and pick out the meat from its claws (use your teeth to break them!). Then break off the tail and feast on the best bit. And for the bravest amongst you, open its back and suck on the rest. How much crayfish do you need? Swedes would normally provide about 0.5 kg (1 lb) per person. Remember to chase it with a shot of aquavit schnapps! (Check out our article on Scandinavian aquavit if you need some help choosing.) 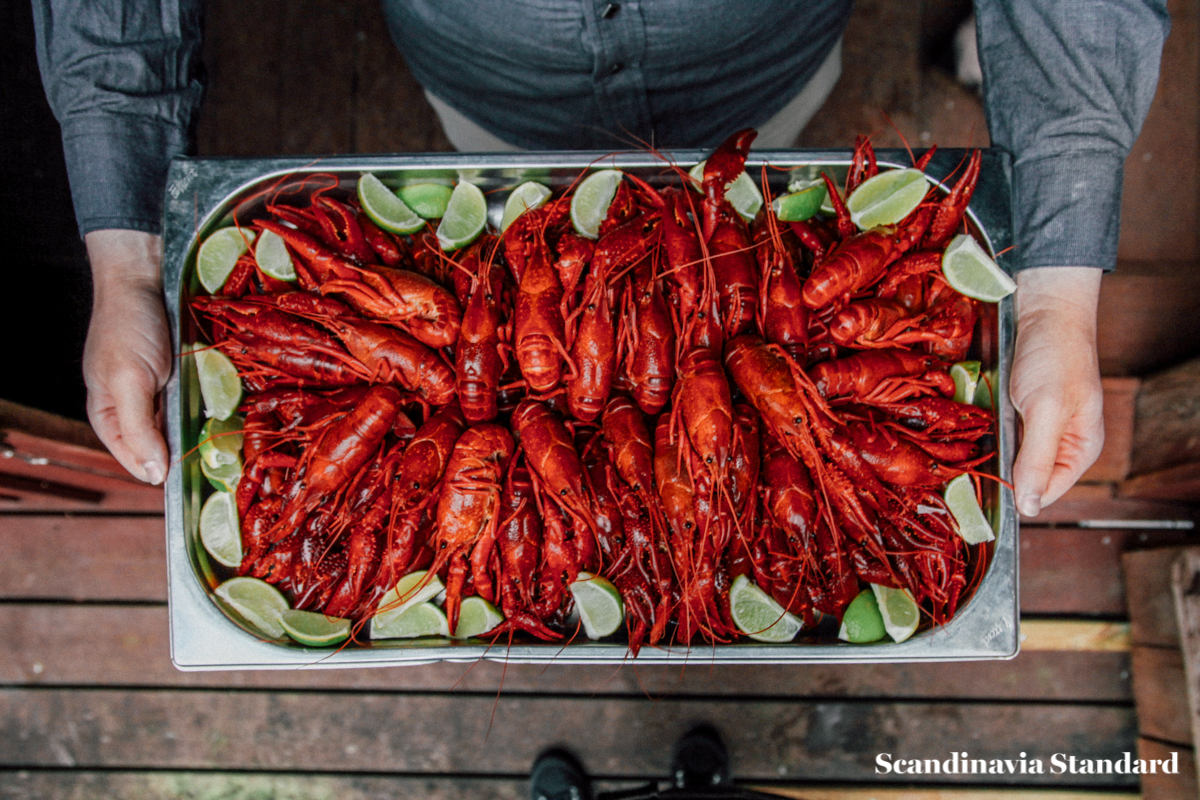 This bit’s important: you need Aquavit. Aquavit is the Swedes traditional ‘schnapps’ distilled from grains and herbs and you can get a lot of different varieties, all of which you’ll forget by the next day. This stuff is like rocket fuel, seriously, you won’t realise as you sit there for hours but you are actually completely intoxicated from the waist down. But, it’s TRADITION! Just make sure you’ve cleared out your schedule for the following day. 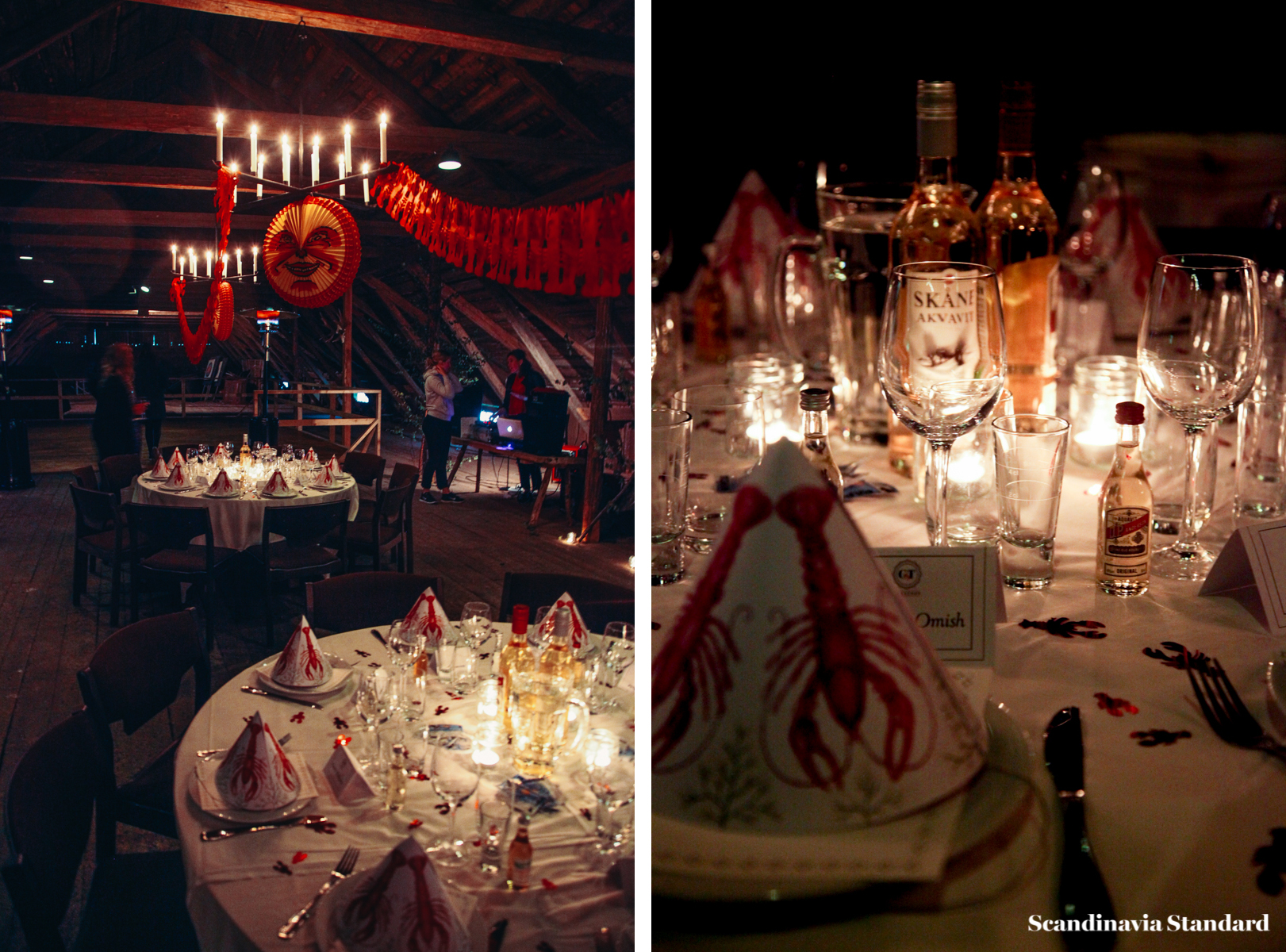 G&T organised the most excellent DJ Fanny to be the toastmaster of the evening. She guided us through the traditions, and most importantly the silly songs. This involved some of the traditional songs sung by Swedes, or my personal favourite: ABBA’s ‘Gimme Gimme Gimme a Kräfta till middag’.

A video posted by Scandinavia Standard (@scandinaviastandard) on Sep 28, 2016 at 1:34pm PDT

In Sweden virtually every supermarket stocks crayfish accessories. This involves hats, bibs and moon lanterns as standard! In fact, the most Swedish of shops, Ikea, now stock decorations for the season. So no matter where in the world you are, you can setup a Swedish crayfish party with Ikea!

Originally eating crayfish was something only done by the Swedish aristocracy. Soon the middle classes started to copy them and have kraftskiva of their own; they took to wearing silly hats to poke fun at the rich and their posh versions. Isn’t that just the best thing? 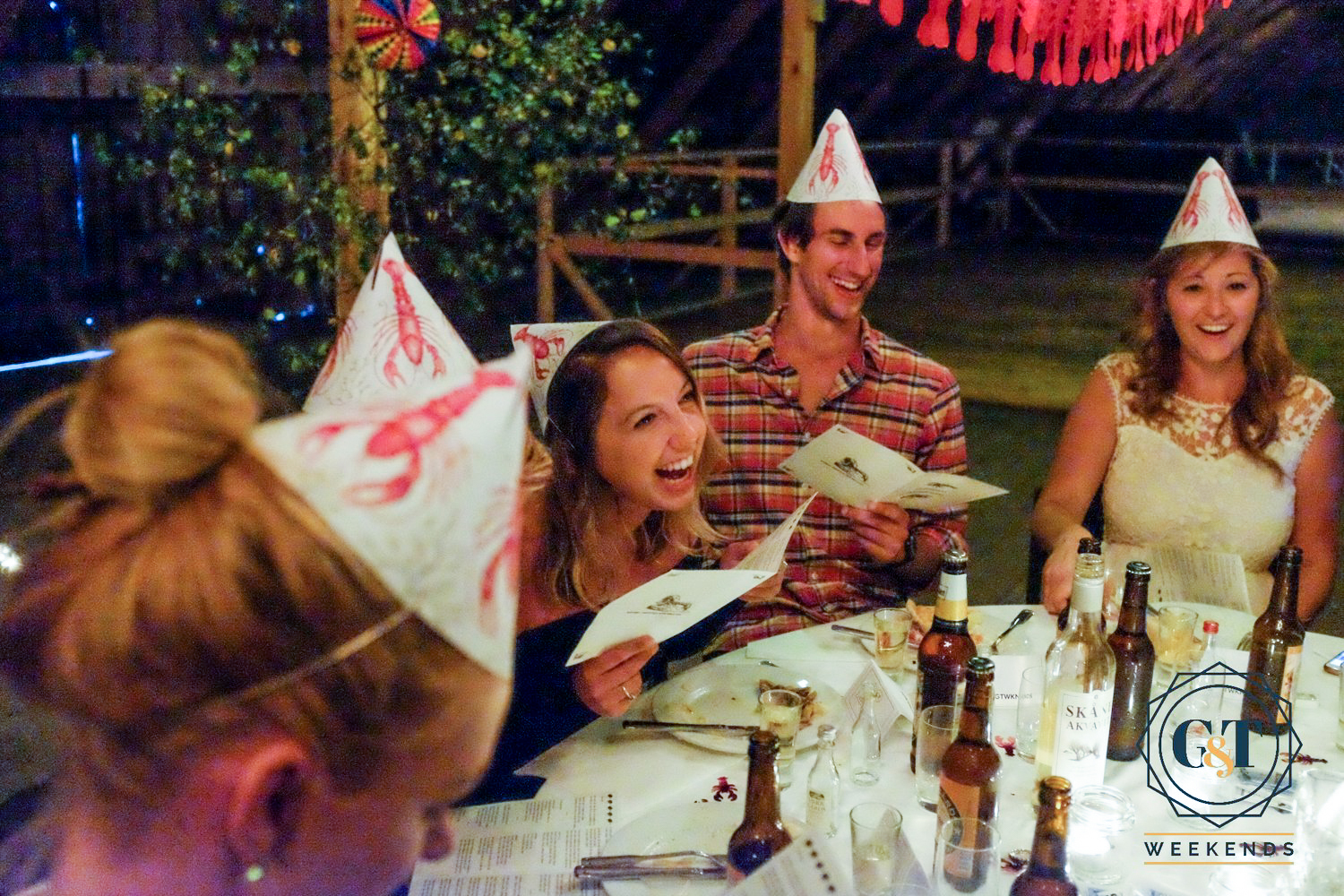 Any celebration that includes a cheese quiche is obviously a celebration of champions. Oh Sweden, I’m going to keep you up on a pedestal where you so rightfully belong. 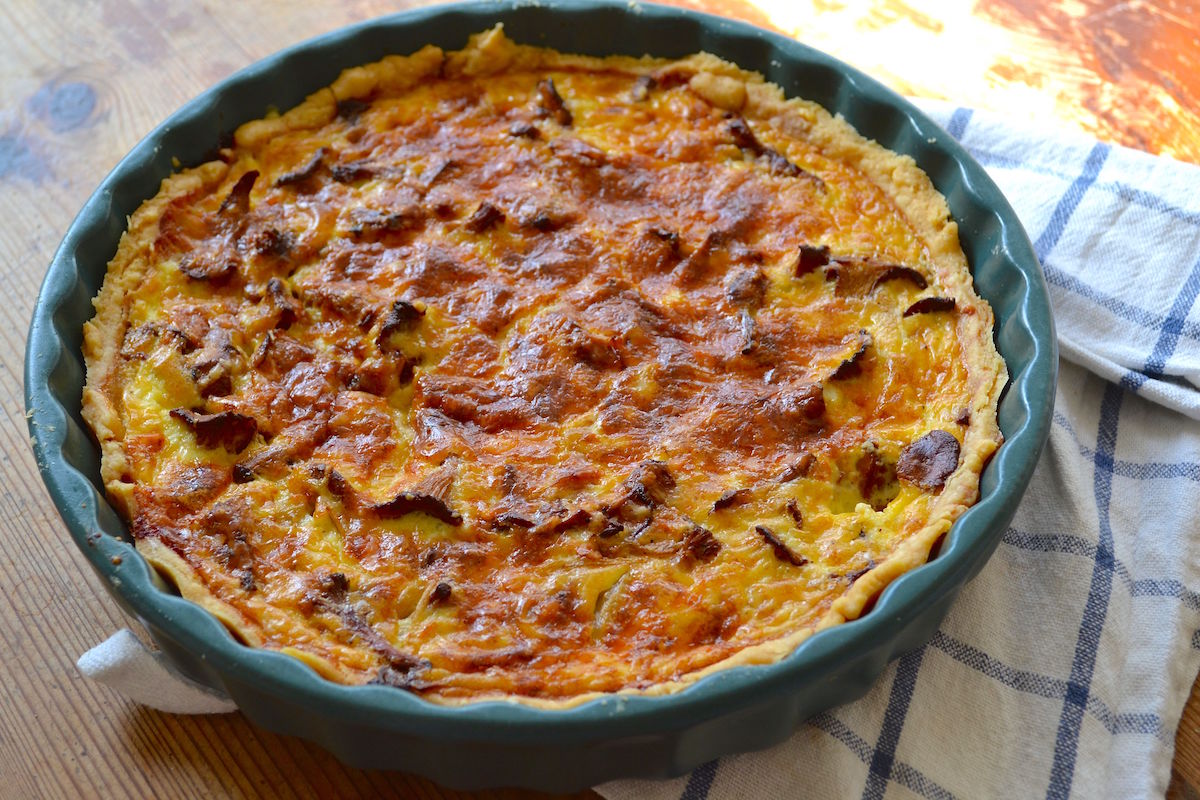 Where to celebrate a crayfish party?

Because, let’s be honest, not all of us know a group of hip, island-owning manor-house-dwelling Swedes. What made this party particularly easy was that it was all organised by G&T weekends. A group of twenty-five descended upon a stunning lake house – built in the mid 18th century – just outside Ludvika in Sweden’s Dalarna County.

This house was verging on ridiculous: rolling lawns, miles of wild blueberries bushes, a spacious barn (ideal for crayfish parties), a caretakers cottage and boat house.

Other than the festivities, there were also hikes around the grounds, clay pigeon shooting, swims in the lake, sauna seshes, tennis matches, canoe paddles and free time to lie on the lawns and do absolutely NOTHING. Bliss! Although there were plenty of planned activities to discover the depths of your own hedonism, you could really do what you liked when you liked. Thank goodness, as the idea of being on a regimented tour makes me a bit antsy, but this was nothing of the sort.

The whole weekend costs 555 pounds (roughly 4,755 DKK). It might seem like a lot of money, but think about how much you would spend on a weekend anyway. Everything is covered, yep, even drinks. 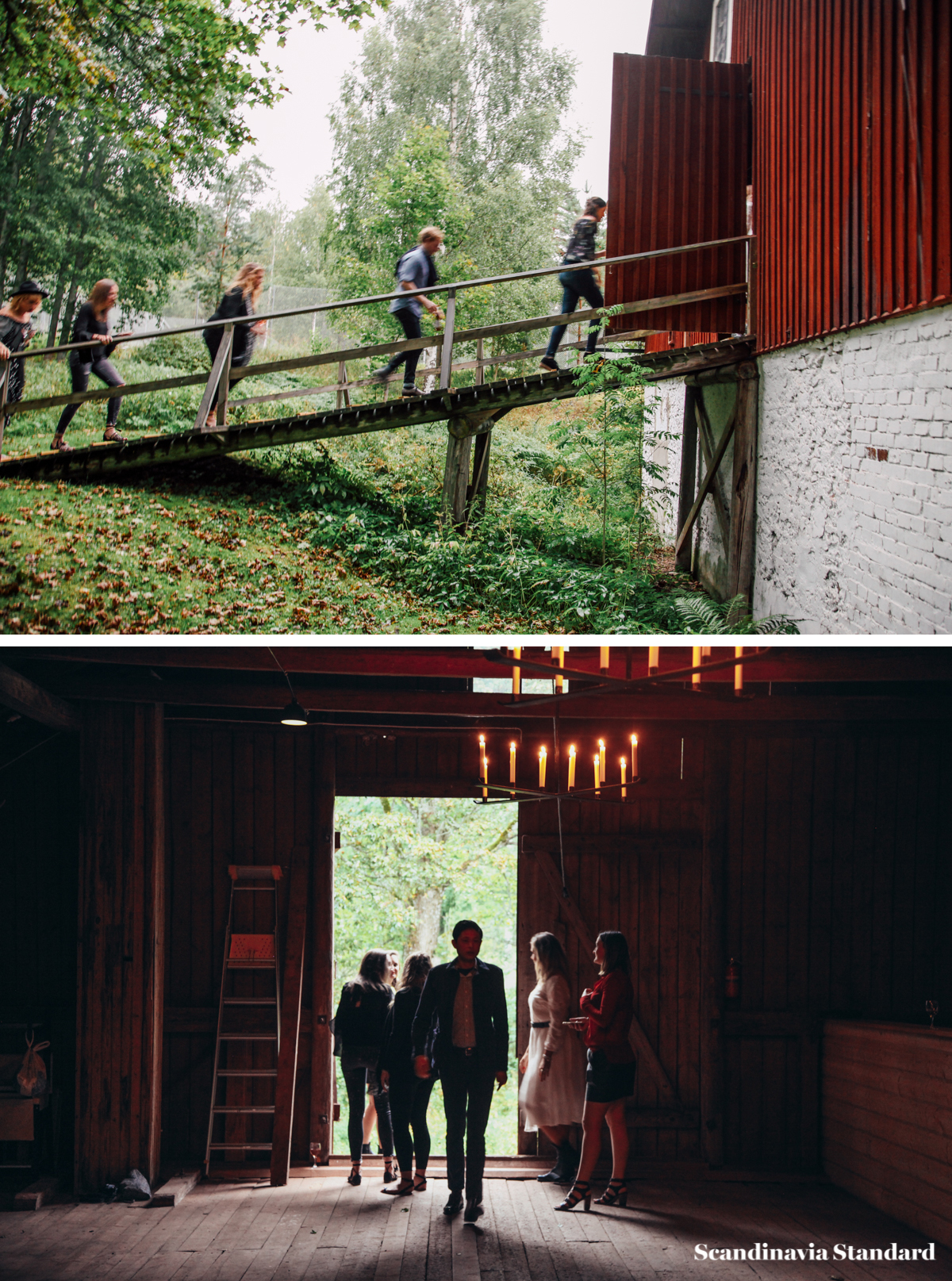 Oh, and did I mention we had our own chef? Lisa was a legend, and easily the most popular person in the house. The highlight meal was probably the moose, served with a creamy sauce made with chanterelle mushrooms that had been foraged from the local woods.

When is Crayfish season?