In 2015, the group released Ind I Flammerne, a debut album brimming with reverb-heavy guitar riffs and foot-stomping rhythms.

After earning a nomination at the 2016 Danish Music Awards, they retreated to Rømø and Bornholm, finding inspiration for their 2018 follow-up, Flænger I Luften, amid the islands’ bucolic landscapes.

The new album, produced by Simon Littauer (Reptile Youth, School of X), is a more sophisticated, experimental departure from the group’s initial sound – but retains a bewitching live session energy.

Peter Kure, De Underjordiske’s lead singer, spoke to us about the band’s tour life, their Copenhagen music scene influences, and the divinity of their concert performances.

After playing Roskilde Festival, you’ve spent autumn touring Denmark, Norway, and Sweden. Have there been any notable experiences?

We received so much positive feedback from the crowds everywhere we played, and generally, we’ve been very satisfied with our performances. But Kristian Bengtsen, the band’s founder and guitarist, became a father just a month before the tour began, which was naturally very challenging for him and affected the tour a lot.

At some point, he simply couldn’t make ends meet, and we had to cancel shows in Oslo and Drammen five days in advance. We were scheduled to play Blå, our favorite venue in Oslo, and we felt canceling that show was not an option. On the other hand, we didn’t find the idea of playing a show without Kristian’s guitar appealing at all.

We found a last minute solution when Anders “Psyko” Christiansen [of Lightwave Empire] picked up the bass, and our bassist, Anders Hvass, visited Kristian to learn his guitar role. We didn’t have an opportunity to rehearse as a band, so we just drove to Oslo hoping for a miracle. Psyko wasn’t even sure if he could do it; at the soundcheck, he couldn’t remember any of the songs in full.

But then the adrenaline kicked in, and we played a killer show to an absolutely packed venue. Psyko remembered all the songs, and Hvass managed to almost fill Kristian’s shoes on the guitar – beyond what anyone could’ve expected. Musically, it was far from the best show on the tour, but the fact that we actually managed to go through with it was such a big victory for us.

Do you think there’s a certain identity found in the Copenhagen alternative-psychedelic-prog scene that influences Danish bands, such as De Underjordiske, working across those genres?

As a band, we’ve always been very much into the local scene. Groups like The Wands, The Road to Suicide, The Woken Trees and Shiny Darkly were all influences when we started out. They were hanging out at Drone – a bar in Nørrebro where we played our first Copenhagen show, and where we spent so many nights after first moving to Copenhagen.

But like us, they were all oriented towards an international scene, rather than looking for inspiration in Danish music. Even though a lot of Copenhagen bands manage to establish themselves outside of Denmark, I still think there’s a sort of a bubble – especially when it comes to those of us who write lyrics in Danish.

Lyrics are a big part of De Underjordiske, and they’re in Danish, so we’re automatically part of the bubble. But maybe that’s why we still look for outside inspiration. Who knows, maybe we’ll start looking for inspiration within the bubble for our next album. At least then we wouldn’t feel misunderstood when compared to good old stuff from the Danish scene anymore. 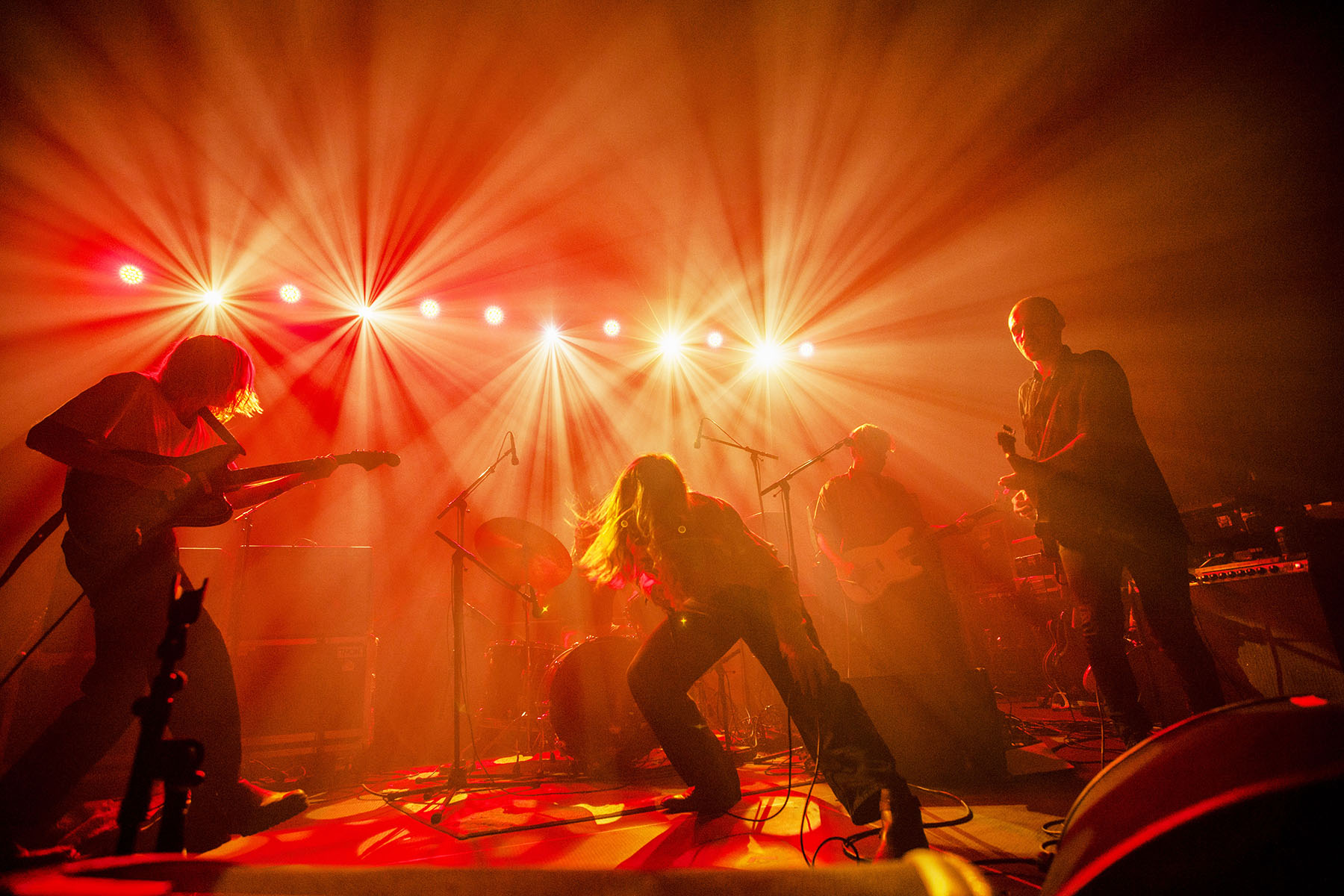 On December 1st, you’re playing Pumpehuset in Copenhagen. What do you look to give those who come to your performances?

In a word: transcendence. We want people to disappear in the music and slide through different universes – forget themselves, remember themselves, go through different feelings We want them to create pictures in their heads with words, sounds and expressions that trigger their imagination.

That’s what we also aim to give ourselves when we play. The energy in the venue during a show is dialectic: our performance is tightly connected to the crowd’s feelings and behavior.

When you see an old man letting his head fall back or look into the dreamy eyes of those in the first row, you’re so much more able to let yourself become carried away. And the same goes for those watching us in the audience. If we are able to express how the music is affecting us, we are more likely to start the pendulum between the band and the crowd, which ultimately leads to transcendence.

For us, there is something holy about the “ordinary” rock concert. By recognizing this holiness, the ordinary can become extraordinary.

Do you have any more upcoming events or performances scheduled before the new year?

After our show in Copenhagen, we will hibernate for a while. Hopefully, we’ll come up with some great new songs during the winter. We already have a handful of scheduled shows for next year in the spring and summer. So far, a highlight is a support show for D-A-D in Horsens in June.