I have always liked the idea of owning less stuff. I grew up with strictly minimalist parents and although I spent several years “rebelling” by labelling myself a maximalist (what a rebel, right?), I always wanted to own less stuff. Unfortunately, possession-purging skills aren’t genetic and I had to learn the hard way.

My friends from university knew that seeing the floor of my room was a rare occurrence. The occasional dawn of a new, cleaner era would quickly be overrun by books and law school notes.

Things changed when I packed up my life and started again: A move to Sydney from Brisbane in 2011 and then a move to Copenhagen in 2012.

I LOVE moving. Yes, it is extremely stressful but it has the wonderful side effect of forcing you to consider all your possessions and get back to basics.

I believe that this is true to a certain extent but actually the Danes really do love to shop, especially for sneakers and interior pieces. It’s just that their focus is on quality design, not quantity.

As I started packing my life down to 23kg, I realized that I needed to embrace this as a challenge. I reflected on what I owned, keeping in mind Buddhist monks who are only allowed to have eight possessions. EIGHT possessions. Can you imagine? I wanted to do something similar, albeit on a larger scale.  I asked myself:

Could I possibly reduce my possessions to under 100?

And so the challenge began. A Google search later revealed that this idea already existed as the “100 Thing Challenge”. So perhaps I wasn’t so original but seeing it all written out the process suddenly became real. I immediately knew: I. Need. To. Do. This.

I decided that it was pointless leaving boxes of things at home, especially when I knew I could live happily with the few things I had with me. 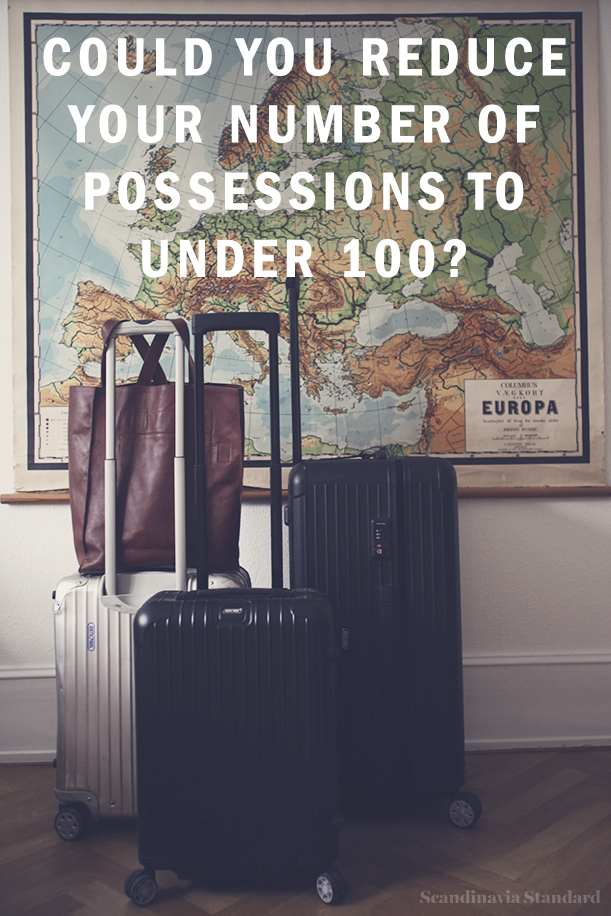 To this end, I sold my furniture, piano, sound system, printer, kitchen appliances, gave away all stationary, art supplies, scrabble boards, picture frames, the lot. I felt more free. All that I now have to my name back in Australia is a periodic table from 1969, some YSL stilettos and an antique trunk filled with a few pieces of memorabilia.

Feel like lightening up? Here’s my advice for achieving a new kind of Zen:

Love everything you own

It’s easier to have less if it’s exactly what you want. Find your favourite and buy a multiple if your love is true. This my take some trial and error. Hell, I’m still looking for the perfect white t-shirt. Woe is me.

Own only one of most things

One pair of sandals. One LBD. One hairbrush. One pair of sneakers. One handbag. I actually used to have eight pairs of Havaianas. These days I have only one pair and somehow life goes on.

I do struggle with this one a bit. Three seems to work for me. Three pairs of heels. Three winter coats. But I use all these things regularly, making them worthwhile.

Sets of things can count as one item

Use this rule to simplify. Especially useful for socks, underwear, white shirts, pajamas that you love. All my sports socks are the same. Same with normal underwear. I understand that this is verging on crazy territory but it makes life so much easier. The thrill of wearing different socks everyday doesn’t exist in my life.

Have one box or chest for keepsakes

Limit all your keepsakes to one container. You know that scene in a film where the person goes through their box of memories? Create a box of memories. It can be large or small; the simplicity is in having them all in one place.

Currently, I have a chest next to my bed in Townsville. Actually, that’s a lie, I suspect I have a couple of boxes of my childhood books and baby memorabilia under the house which I should attempt to go through in the near future. One step at a time, people.

I’m making the rules. This is my rule. Books are one item: library. Done.

Give yourself a break

Being too strict can backfire. Don’t push yourself too hard. I found that aiming to be a practical minimalist rather than a dogmatic minimalist definitely made the process far more achievable.

It’s fun to have a few areas of your life where you transcend all restriction and embrace your whimsy. Some people love to collect shoes. For others it’s perfume. For me, dresses don’t count. Nor do scarves. Or teacups.

I love dresses. For me they are a symbol of my individuality and my belief in personal freedom! And I love my scarves: they are simple and lightweight. I’ve also started collecting tea cups. Well, kind of. I currently own two, which it pretty minimalist for a collection. You get the picture.

Notice he only has one jacket?

Mend or get rid of anything that is damaged. The process of moving is a great opportunity to prioritise getting things mended. Don’t let yourself put things in the final suitcase unless it’s in useable condition. I superglued coral bangles, got extra holes punctured in belts and visited the cobbler. Many things can be salvaged but recognize when something can’t: anything with permanent stains, tears and smells needs to go. These pieces have had a good life. Now it’s time to say goodbye.

It’s tempting to take that dress you just know you’ll fit into one day. But would you taunt your best friend by buying her a dress that doesn’t fit her? Of course not. Be a friend to yourself. If it doesn’t fit you now it properly won’t fit you in the near future. If you absolutely must keep something that doesn’t fit, put it in your keepsakes box or in storage. Moving countries is a great time to start accepting where your body is at.

Get rid of anything that doesn’t make you feel good

Focus on how each piece makes you feel. Is there a bad memory attached to an item? Does it send you on a mental spiral every time you look at it? Get rid of it!

You Aren’t Obligated to Take Hand-Me-Downs!

Of course it’s kind of friends to want to share. But rarely are clothes that your friends hand down to you worth wearing. Most secondhand things I receive end up in a secondhand store within six months. Only take it if you truly want and will use it.

Create a colour palette and a uniform

I decided to get rid of all black as I wanted to replace it with navy blue. Alas, this rule was difficult to uphold in the land of shades of grey and black has re-entered my wardrobe with gusto. Allow your palette to evolve. Many of the things you think you will want to wear when you move will not end up getting worn.

As for a “uniform,” go for looks that suit your style and body type.

Sell things but beware: it can be very time consuming

Trying to sell even expensive items can be a nightmare!

I tried to sell antique tables and chests of drawers on Gumtree for months before I moved overseas. I was jerked around and almost scammed. Because of the attempted scam, I ended up lending these sentimental furniture pieces to friends and now wish that I’d just sent them back to my family in Brisbane when I sent other possessions into storage. Anyway, the feeling of giving things away can be worth more than the money you would sell them for.

I’ve digitalized my music collection, my film collection, even my books where possible. These days, it’s easier for me to buy digital books.

One of my obstacles to simplicity was that I was constantly collecting inspiring notes and images. I had countless folders of inspiration that I wanted to organise (one day, I swear!). I took photos of all these items then put them in Evernote. My life (and folder usage) has improved a lot since then.

I was preparing to move overseas three months before I moved. I should have started even earlier. Getting rid of your things slowly and mindfully is essential; the task can be overwhelming. I spent my last three months in Australia finishing off a final projects with my full-time film study, working part-time, organising working holiday visas and selling all the stuff that accumulated in my life. It was a nightmare!

Check out this amazing book for balancing creativity with minimalism: “Perfectly Kept House is the Sign of A Misspent Life: How to live creatively with collections, clutter, work, kids, pets, art, etc… and stop worrying about everything being perfectly in its place.”

Remember, we live in a world of abundance

You don’t need all this unnecessary stuff. You will survive and thrive with less.

The 100 item challenge might not be suitable for you but it was for me. My list of possessions has obviously gone up since moving to Denmark, especially since household possessions weren’t on the list. Also, I have got rid of many of the things that I brought with me to Denmark, gradually replacing them with things I prefer. 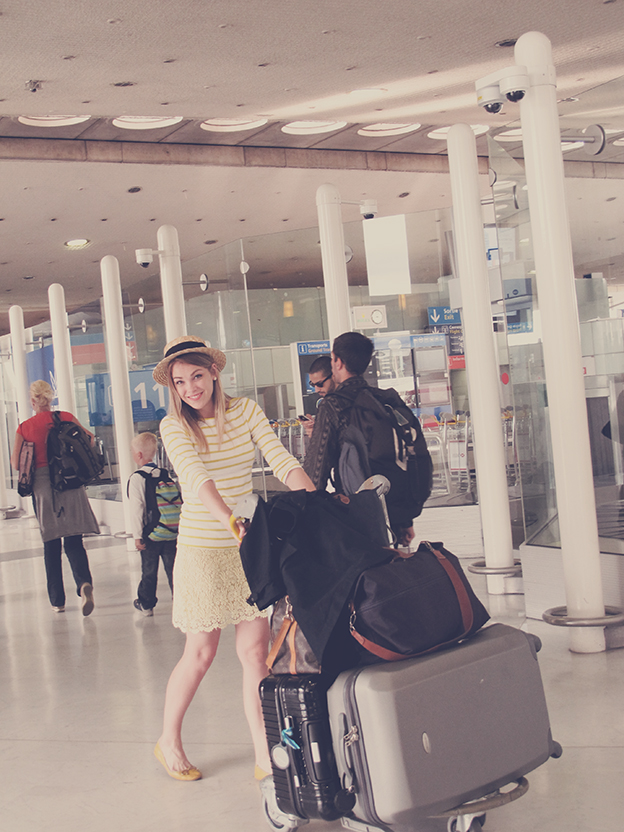