The Ordrupgaard Museum, located in Charlottenlund just north of Copenhagen, is easy to reach. Take the S-tog to Lyngby and then the 388 bus directly to the museum’s entrance. From Copenhagen Central station it takes 30 minutes. But the proximity to the city just makes the beautifully landscaped grounds and estate all the more delightful.

While the original manor, once the house of Wilhlem Hansen, then the Hafnia managing director, is still intact, it is the addition designed by Zaha Hadid that makes this museum worth your time. Sleek lines that seem to defy gravity and full glass walls amongst the pretty, languid greenery of the grounds gives the impression of a Frank Lloyd Wright’s Fallingwater if he’d designed it to look like a spaceship.

The museum’s permanent collection, especially the few Vilhelm Hammershoi pieces, is lovely. Hammarshoi is a Danish predecessor to Edward Hopper, with his expert studies of light in space. His works have a calmness that never quite give way to loneliness. 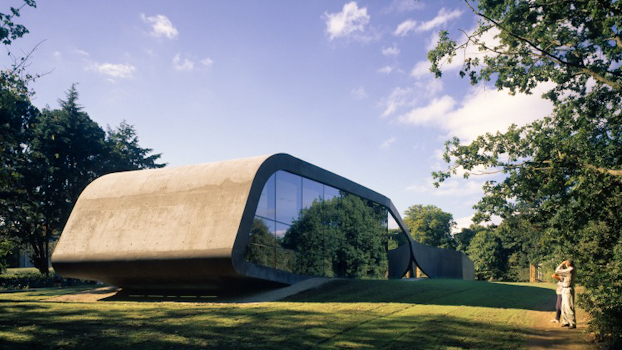 But it’s a good thing I didn’t, because now I can tell you all about the Mary Cassatt exhibit they’re currently showing. I’ve always liked Cassatt’s work. A particular favorite, mostly because I’ve had the pleasure of seeing it on a regular basis at the Museum of Fine Arts, Boston, is Tea, 1880. Depicting the private lives of women is still a rebellious act, so I don’t underestimate her courage in choosing this subject matter in late 19th century Paris. Her contemporaries, including Degas, Manet, Sisely and Cezanne are generally better known, but of les trois grande dames, Cassatt stands out as the most celebrated.

The exhibit at Ordrupgaard focuses not on her most well-known pieces, but on her process. In addition, it is pastels and sketches that populate the walls rather than her oils. It’s not an exhibit on the work of Mary Cassatt so much as it’s a display of the process of an impressionist.

The sketches are, well, sketchy; they don’t show a master with a pencil but rather a pre-image waiting for translation with color and brush. The pastels are more interesting, overlaying colors similar to her oils. The pieces are unfinished in the extreme- floating heads and hands on white paper.

The exhibit is quite small and a bit monotonous. With all the gorgeous space the museum has, it’s a wonder that they chose to exhibit these pieces in two front rooms that have the feeling of an add-on. They would have been housed to much greater effect in one of the sumptuously decorated rooms of the original building, although perhaps permanent collections are never moved.

If you’re a fan of the impressionist era and/or have a particular interest in the process of making art, this is a lovely little exhibit.

Even if you come away underwhelmed, there’s plenty around the rest of the museum to make any trip valuable.