This article is part of a monthly series by Copenhagen street photographer Jon Bjarni Hjartarson. You can read his first article here.

A big part of my street photography is taking portraits. The portraits are obviously semi-staged but opposed to actual staged portraits, I usually only take two or three shots. I never instruct people; the poses are peoples’ natural gestures. I find the meeting itself fascinating – striking up a brief conversation with a stranger.

The camera is an effective excuse to talk to people and I like to just let the conversation flow. In most cases I try to communicate the conversations in the captions of my photos with an objective or more naive voice that entirely accepts the subject point of view.

I strive to leave out sentimental interpretations in the small stories that accompany my portraits. I don’t have any kind of moral agenda. But in my experience, telling a small fraction from a conversation, in which you adopt the subject’s point of view, can reveal small cracks in pre-concieved notions.

I started doing portraits on the street out of a desire to get closer to people. It’s very common to see street photography of people in miserable conditions photographed from a safe distance – an understandable and probably very sane approach. Nevertheless, that feels exploitive to me. I have done a lot of pictures like that, but the results never feel satisfying. Pictures done like that convey a completely different message; one that is either sociopolitical or just plain sentimental. That is not my intention.

Confronting people on the street to do close up portraits is extremely intimidating. It’s an intrusive thing to do, and I know that having one’s picture taken when it is done at point-blank range can be an terrifying experience. Using a small camera with a wideangle lens that forces me to get very close, which means that I puncture my subject’s personal space – as well as my own. But this is also what makes for a strong expression and that is why I usually never do more the a couple of pictures – the initial expression is what I’m after.

In my next article I will be talking about the challenges of doing close-up candid street photography, addressing both positive and negative confrontations. 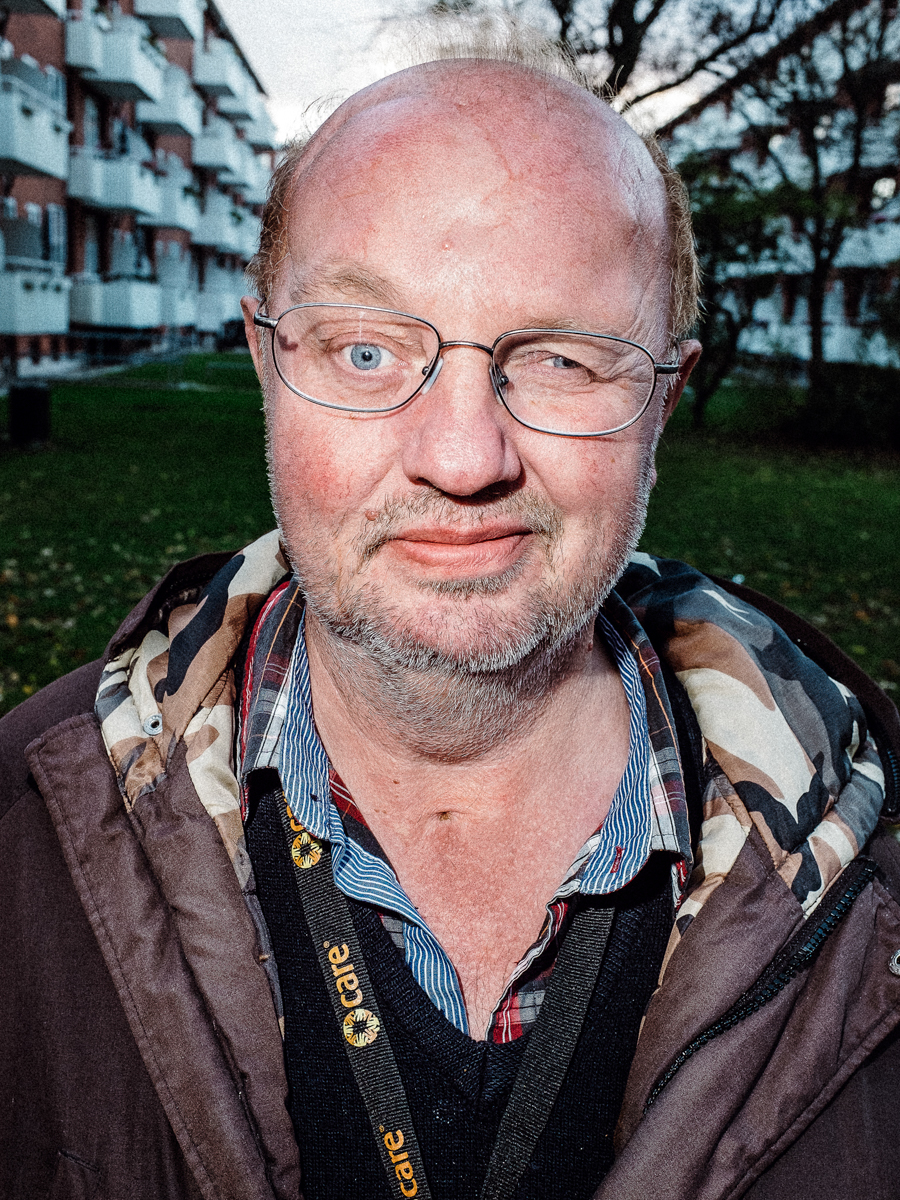 Today I went for a walk. I wanted to do some portraits on the street. I met this man and he was kind enough to let me take his picture. I got his name I just completely forgot if it was Aaron or Andy. I guess I’m not very good at remembering names. 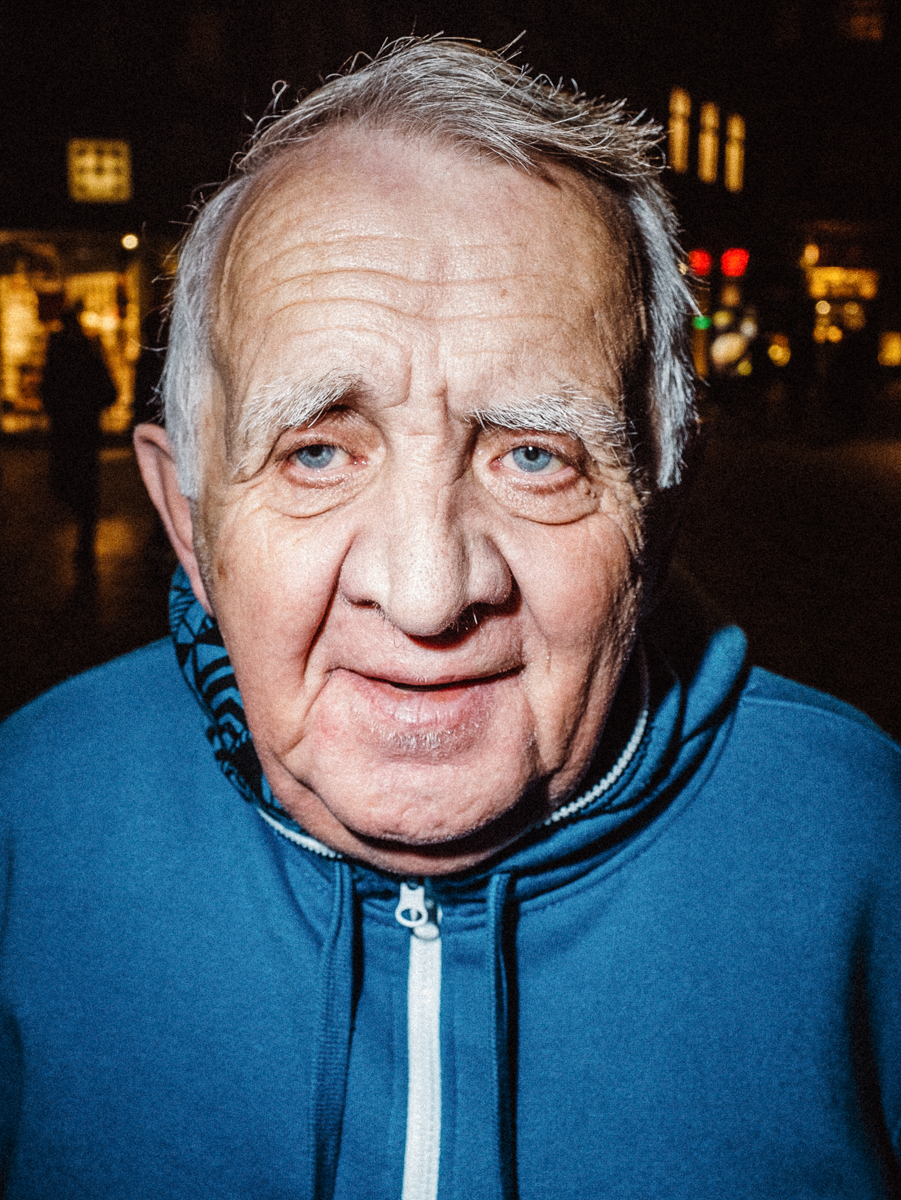 This is Bent. He was walking down the street and I asked him if I could take his portrait. “Well of course you can” he said. He was very friendly. The responses I get differ a lot, some are skeptical, some are aggressive but most people are friendly and appreciate it when you show interest in them on a busy street. And usually I get a chat and a smile which makes the day a little better. 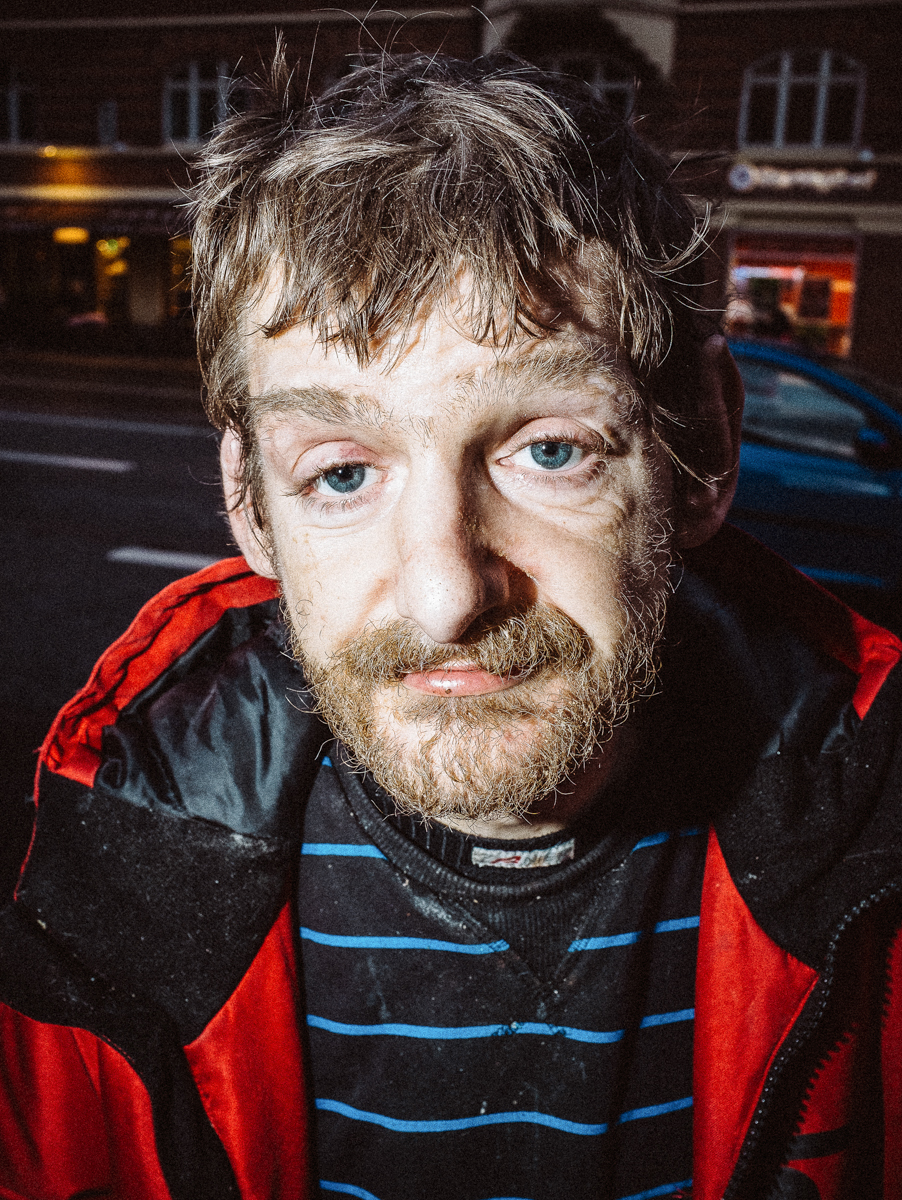 This is Brian. He told me he has been living on the streets for twenty years now. I met him while he was collecting money for a place to stay the rest of the month, because he’s tired and needs rest really bad. 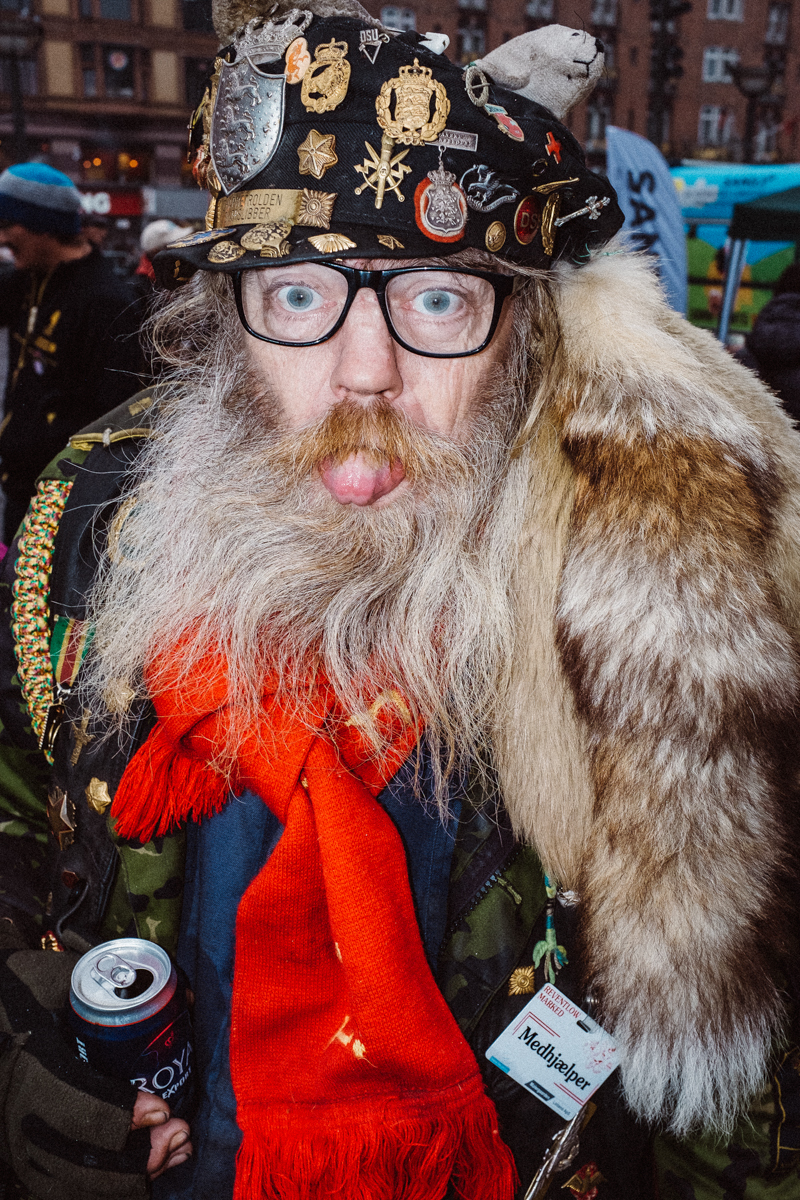 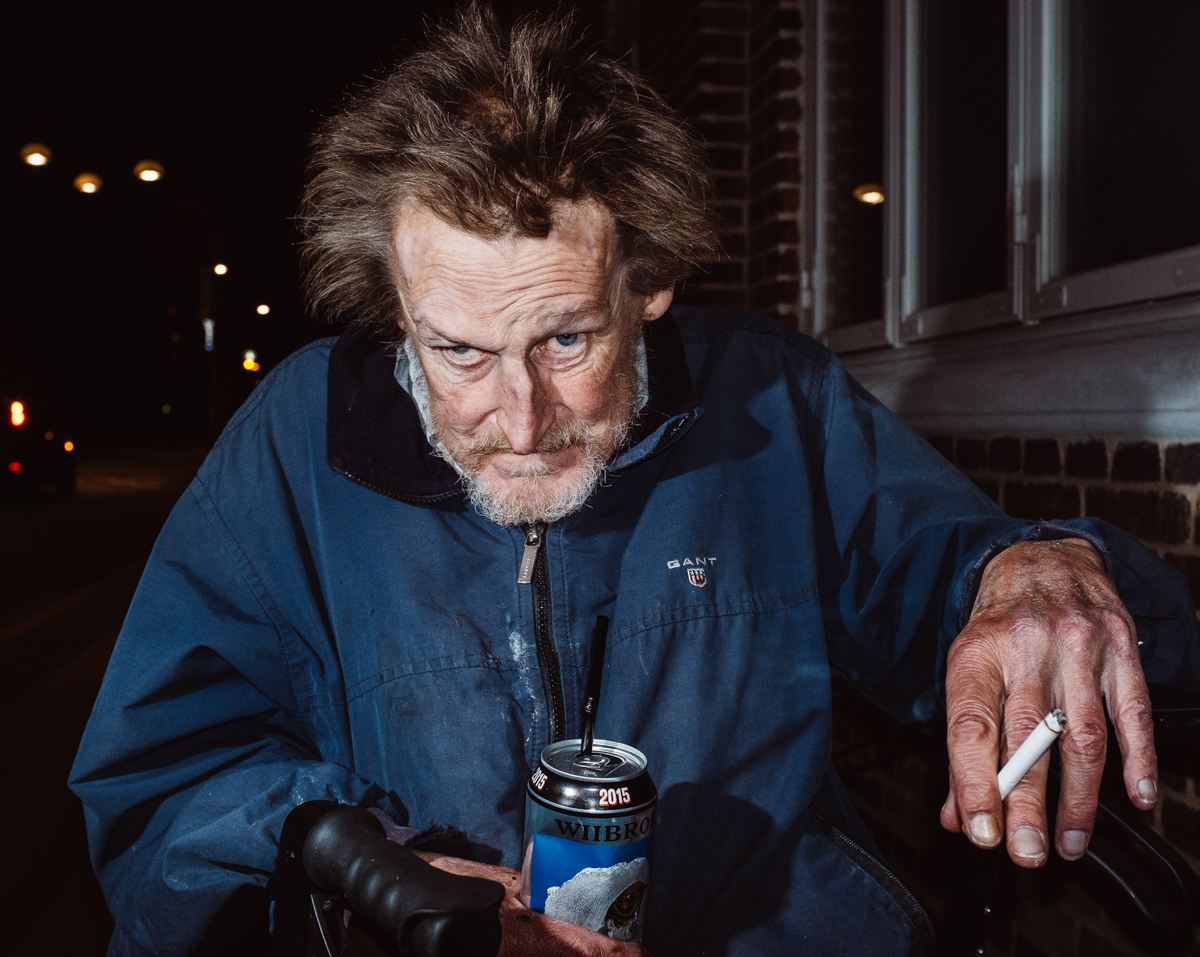 First I passed him and later I found out his name is Douglas. Candidly I took his photograph while he was just standing there motionless supported by his walker. After I went around the block I felt like I had to go back and have a word with him. Then I saw he had moved around the corner, sitting on his walker talking to a lady who had taken a seat on the ground beside him. I did not want to interrupt their conversation, so I just walked by and carried on with my stroll. When I was on my way home four hours later, I saw him still sitting at the exact same spot. I asked him if I could follow him home. Without looking up at me, he asked how many beers he had left in his bag. I counted four beers. He said that he couldn’t go home with only four beers left. Without ever seeing my face he handed me his Mastercard, his pin and asked me to go buy him some more beers. I looked at the card and asked if he was Douglas, he confirmed and off I went. In the kiosk I first tried to buy four beers but the transaction was cancelled, the clerk said he recognised the card because it was all bend. We tried subtracting two beers and then the transaction cleared. When I got back to Douglas I could see that he was freezing and had to get home. He lives in a nursing home only 200 meters from where we stood, but he didn’t trust his legs to walk home. I asked if I could stroll him home on his walker, but it seemed like a hazardous idea, so I walked to his nursing home to get help. When I got back to him waiting for help to come, he saw my camera and was fascinated by the look of it. He asked me if I knew Walker Evans and I confirmed. He then told me that he was once photographed by W. Eugene Smith in New York City. Before I got him to tell me the story, the wheelchair came by and off he went to his home. 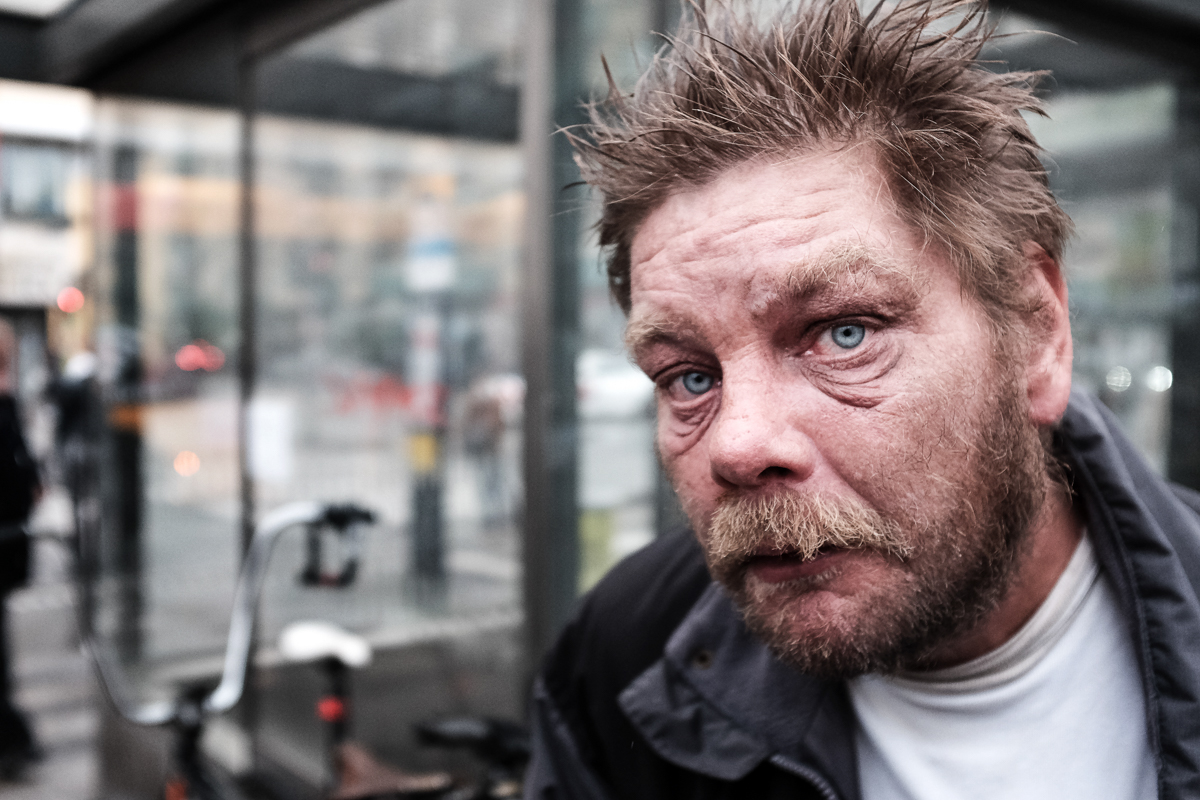 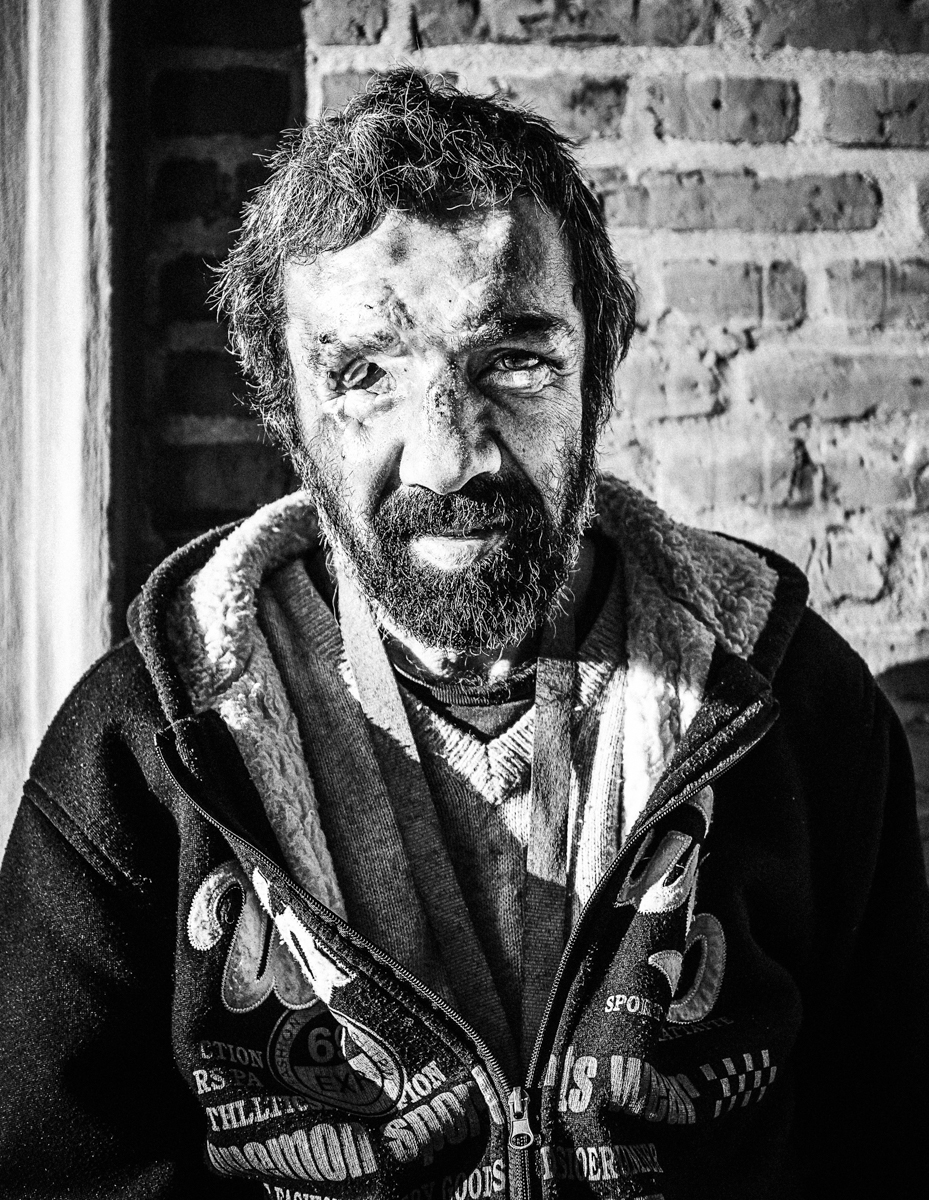 This is Jamal. He was severely wounded in the Iran-Iraq War in 1983. I have wanted to talk with him for a long time, today I finally got the chance and he turned out to be very kind. His story really puts things into perspective, and my petty problems seem ridiculous. 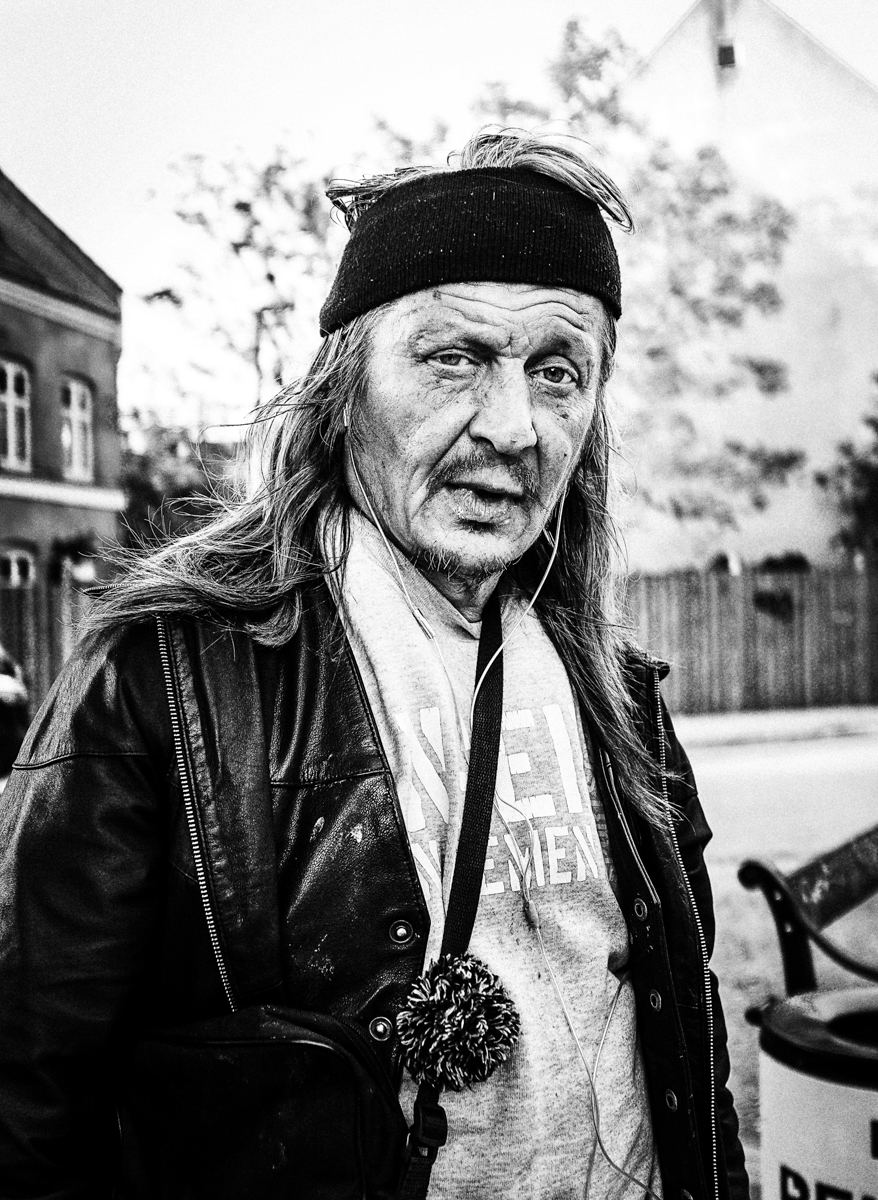 This is Joona. He’s from Finland and I helped him with directions for shelter. As we where walking I asked him where he had been. He made a deep sigh and told me that it was a very long story. I took his word for it.

This is Jørgen. He used to sell Hus Forbi, the danish homeless magazine. Now he is fighting a very vicious cancer disease. 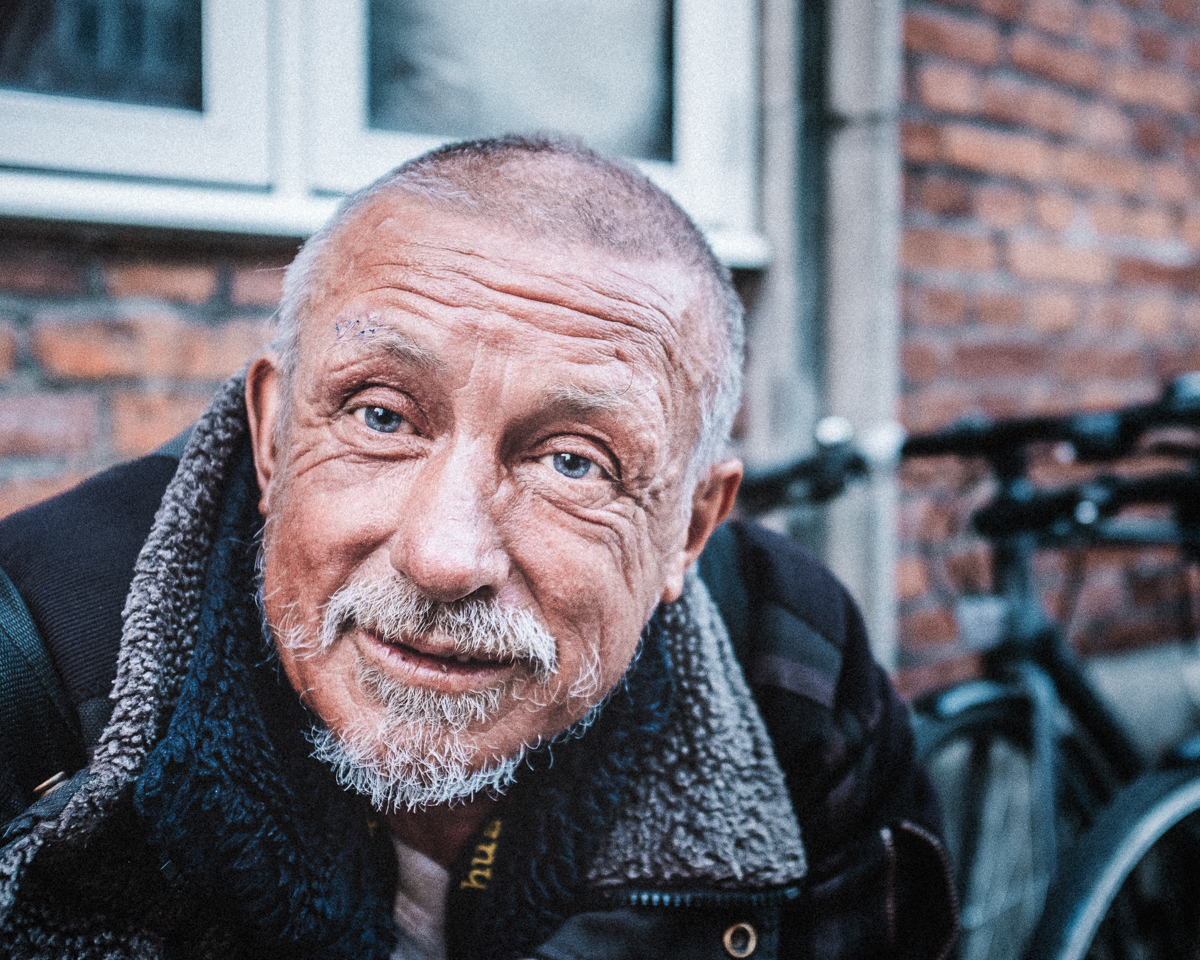 The other weekend I noticed that somebody had left a bag and two cases of soft drinks on the street straight across my apartment. It had been there all day. I smoke cigarettes out the window and therefore I notice what happens on the street. At about 7 pm I saw that my friend Kristoffer had placed himself right across the street from my apartment and carefully surveilled the two cases of soft drinks on the street. I thought it was an odd coincidence that he sat straight across from where I live. He noticed that I was standing in the window and laughed at me, pointing at the two cases. He couldn’t recognize me as he didn’t remember that we ever met. I went down to talk to him and told him that he was free to take his prey as it had been there all day. He was hesitant about it because it didn’t belong to him but I assured him that somebody had just left it there for anybody to take. I looked through the bag and found four beers, I let him have them and told him that it was a bad catch if he wanted alcohol, he shrugged and told me that he would cash the cans and then buy alcohol. 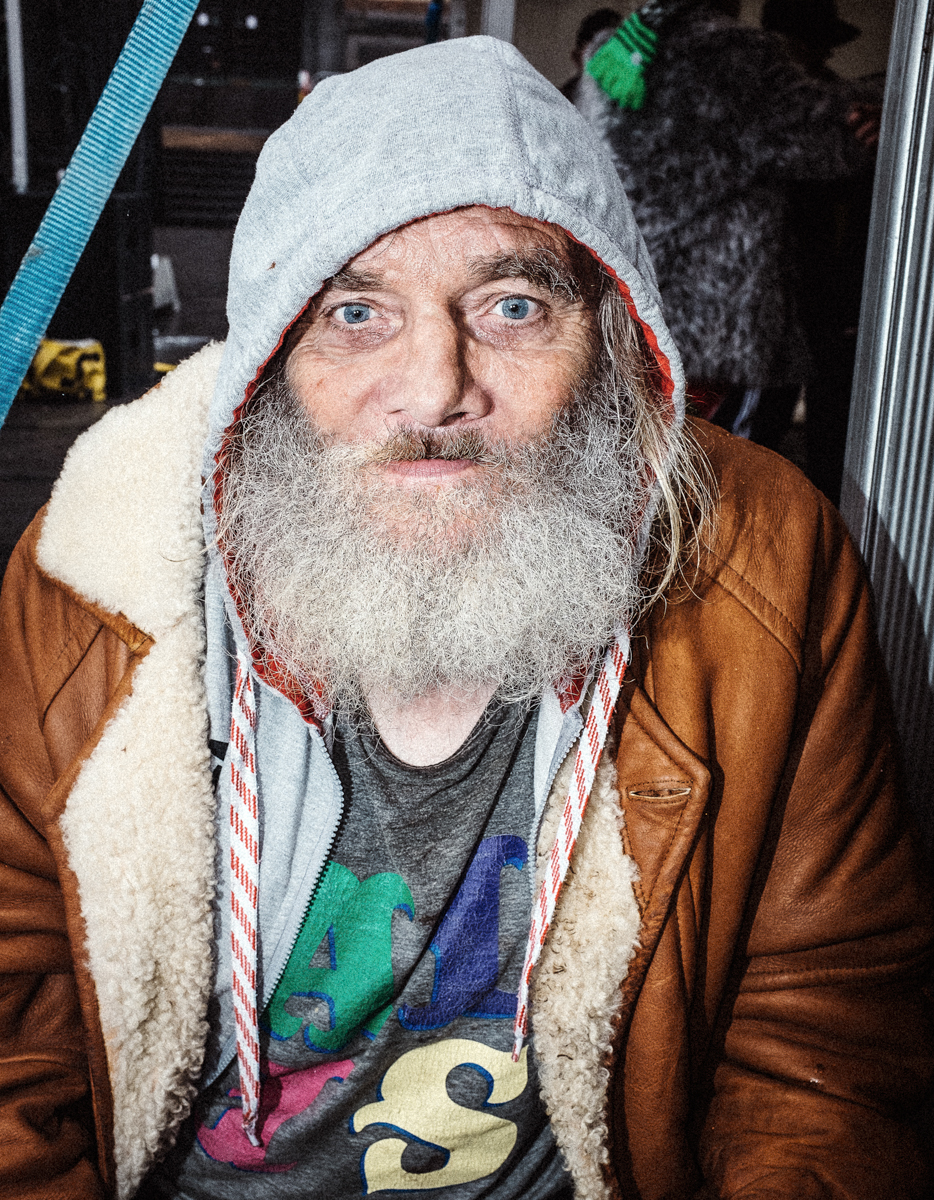 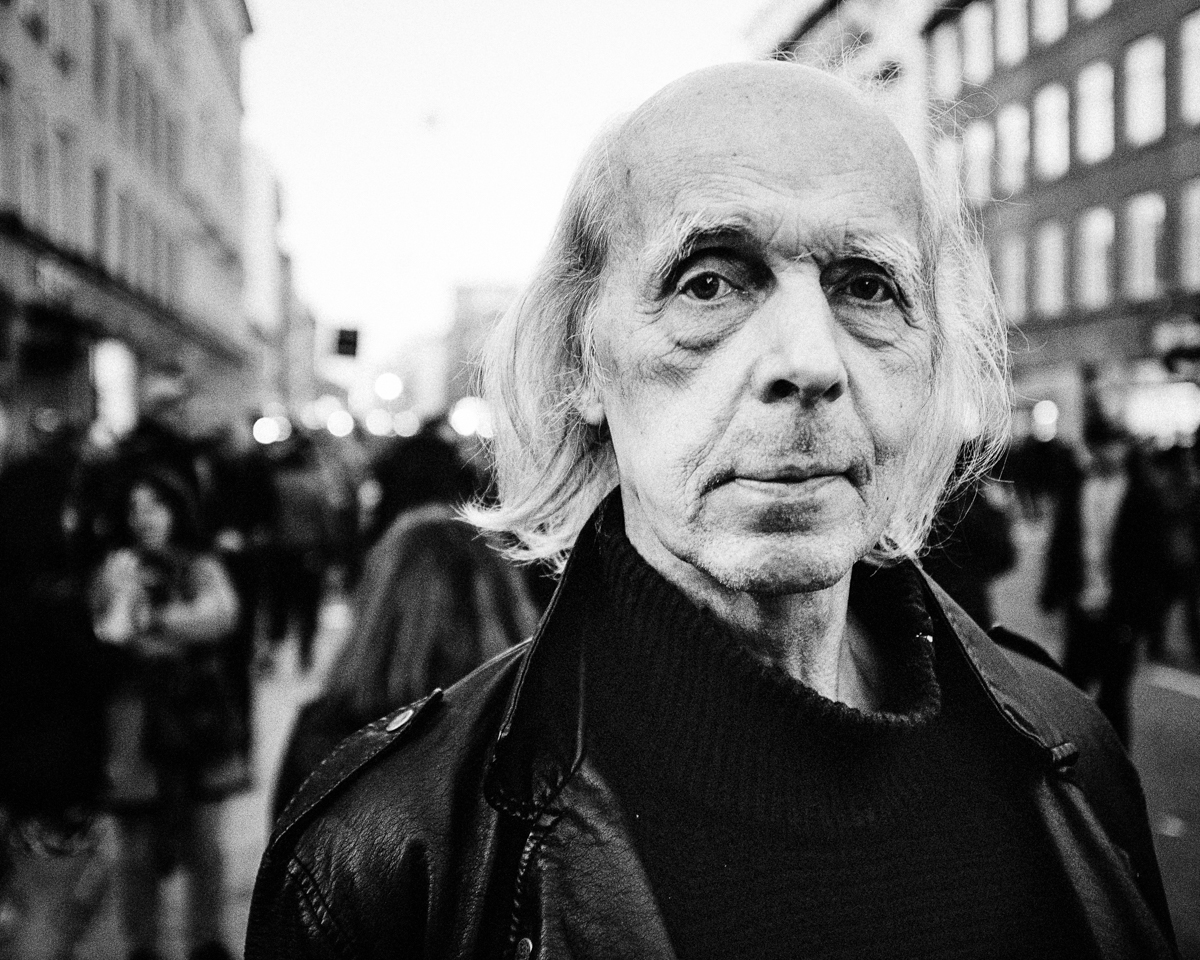 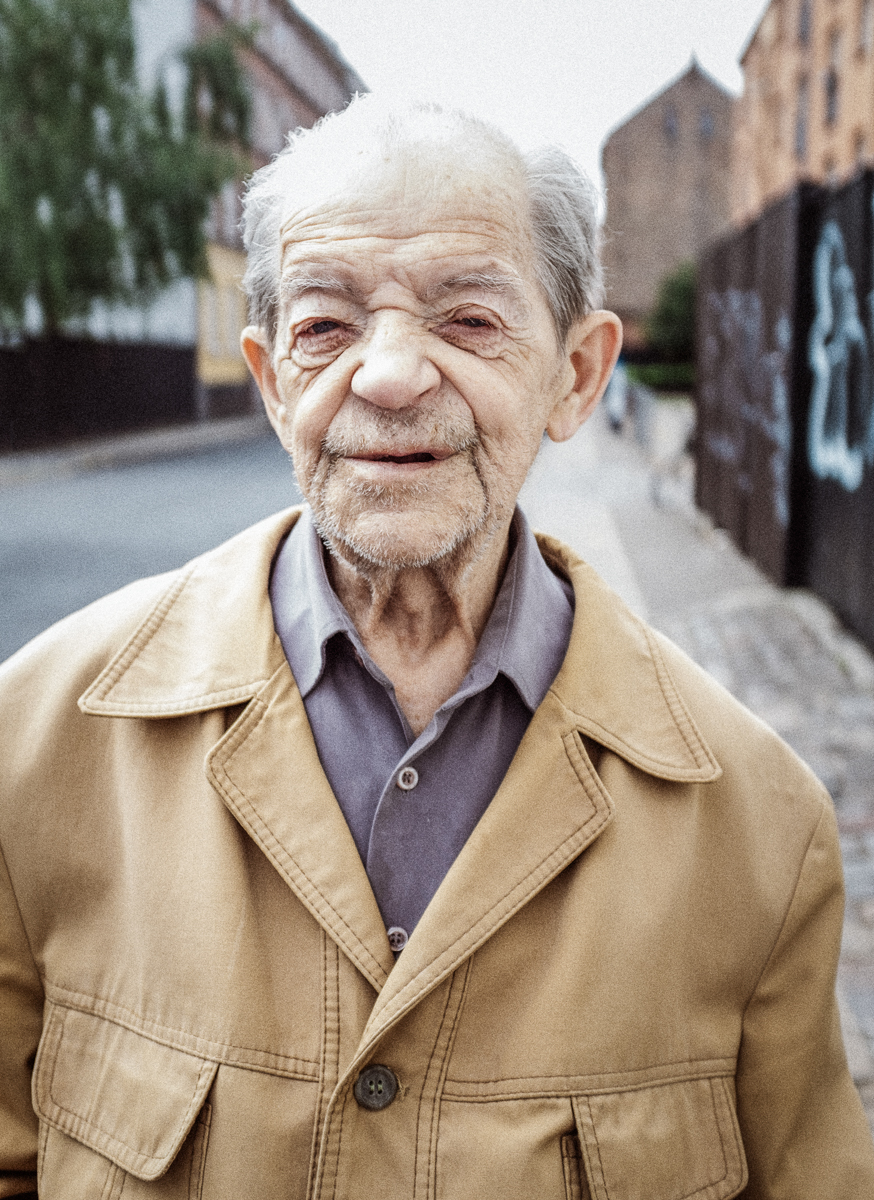 This is Pouel Erik. Today I followed him to the bus stop as he was on his way home from meeting his girlfriend. He’s 93 years old and he told me that the secret to good health is liver oil from halibut. He worked at a smokehouse all his life smoking fish. He also told me that he found 10.000,- kr in his pocket a couple of days ago, but it was taken from him by a ghost that is living with him.