Danish architect Jørn Utzon was known as a visionary, with the ability to work between functionality and fantasy. The best example of this is his globally-renown work designing the Sydney Opera House in Sydney, Australia.

Utzon travelled the world collecting inspiration and references for his projects, and this can be seen throughout the inventive silhouettes and layouts of his work. Jørn Utzon designed mainly through the 1960s, 70s, and 80s, with a huge portfolio of work ranging from private residential spaces to large-scale public spaces. From small houses to iconic masterpieces, Utzon’s work is always unexpected, playful, and inventive.

These are the important Jørn Utzon buildings to know:

AHM House is a modernist house in Hertfordshire, England, designed by Jørn Utzon and structural engineer Povl Ahm. It was recently renovated by Coppin Dockray Studio. Ahm invited Utzon to design the house for him and his family in 1961. Utzon was well-known from his residential works; particularly their unique layouts.

The ground floor of AHM House is connected to the landscape with floor to ceiling windows along the building and a staircase that is both in and outside the home. The structure is primarily in concrete and yellow Danish bricks, in stark opposition to the surrounding landscape. Longitudinal wooden plates are placed at the ceiling, while light colored tiles cover the floor.

The highlights of the house are the living areas, the quality of each space, and construction details. This house is a wonderful combination of functionality and elegance, which is why it endures as a classic today.

Can Lis house by Jørn Utzon

Can Lis is a project located in Porto Petro, Mallorca, built in 1972 and in-use between 1974-75. The house sits between the sea and the road, designed for Utzon himself and his family.

The building was inspired by Spanish architecture and built with local materials such as Santanyi sandstone and Maré sandstone. The roof is made with modular ceramics called “bovedillas” supported by concrete structural beams.

The layout is divided into four smaller buildings and connected by corridors. The largest space is composed of a kitchen and dining area and a large courtyard. The following smaller buildings are the living area, bedroom spaces, and studio. The site is uphill; one can see the sea and surrounding green area from the terraces.

Luckily for design and architecture lovers, it is possible to visit the house, which is currently administered by the Utzon Foundation. There are restrictions on the number of visitors so be sure to check the website before going.

Can Lis house, 1971 by Jørn Utzon, Photography by Torben Eskerod

This complex of individual houses was primarily designed for families on long-term temporary stays in Denmark, such as diplomats.

In an example of how Utzon translated his travel into projects, the design of the houses was influenced by northern African mountains and courtyards in China. 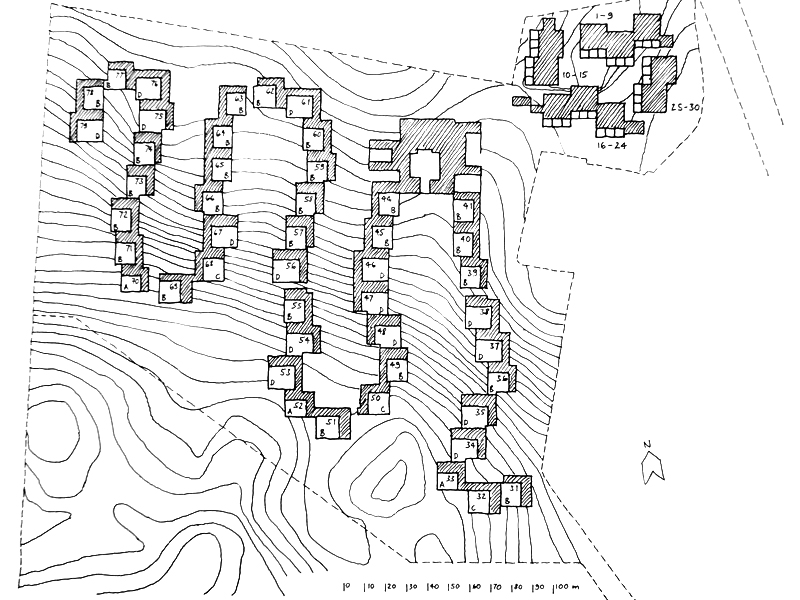 There are five house types. Four of the types feature a courtyard (gårdhavehuse), and one features a terrace (rækkehus). The houses are similarly organized, but vary in size and number of rooms. Independent of the type, all the houses were all built in yellow Danish bricks and with tile roofs. The proposed shift between the buildings make them detached from each other and acoustically protected. 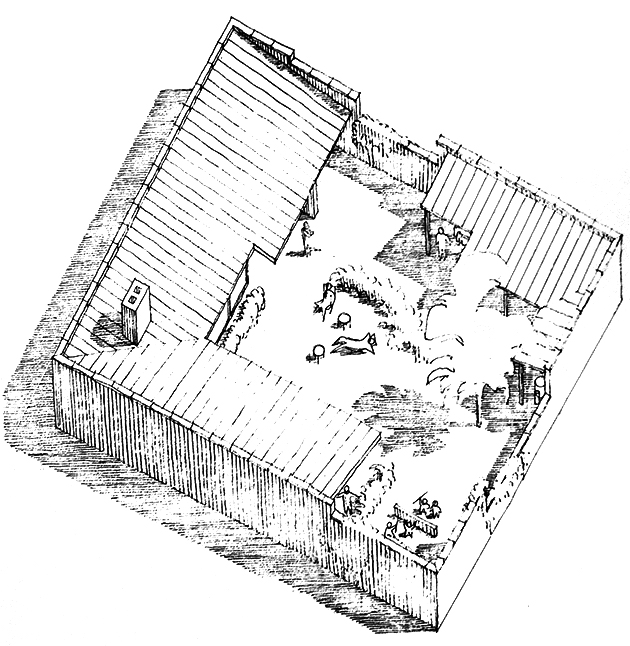 The buildings are connected by three small streets and surrounded by a large green area. Located very close to Fredensborg Castle and Esrum Lake, the housing complex has a common shared space and a restaurant. You can spend a night at their bed & breakfast if you’d like to experience the exceptional architecture and beautiful natural surroundings for yourself.

The Sydney Opera House is the most iconic project by Jørn Utzon. Utzon won an international competition in 1957, swaying the jury with his provocative design.

The building is divided into a concert hall, library, cinema, restaurants, bars, and dressing areas. The interior layout was modified during the construction, as well as the shells. The main roof construction had to be reformulated with the engineers in order to be produced and built. The shells are covered by more than 1 million Swedish tiles, and feature tall glass windows facing the sea.

In 1966, after nine years of work, Utzon resigned from the project; it had gone way over budget and funds were withheld, meaning that Utzon couldn’t pay himself or his team. Australian architect Peter Hall took over the project. When he spoke with Utzon before accepting the commission, apparently Utzon told him that he’d never manage to finish the building. Despite that, the Sydney Opera House opened in 1973 to incredible acclaim.

In 2007 the Sydney Opera House was recognised with inclusion on the UNESCO World Heritage List, cementing its status as one of the most important and influential silhouettes in modern architecture. Utzon never returned to Australia to see the finished building.

Churches have their similarities when it comes to tradition, rituals, and symbols, but each one is unique – particularly the interior. Bagsværd Church, opened in 1975, is one of those “surprise” spaces that must be visited. The facade brings to mind industrial buildings, with its flat roof and white exterior. The curved ceiling in the interior reveals the audacity of details and construction.

The project was mainly built in prefabricated concrete wall panels and the ceilings were cast in-situ concrete. The curved ceiling guides the light throughout the building, creating a unique experience. The light color chosen for the inside and wooden finishes suit the project perfectly, emphasising the bones and light sources of the building. Some of the artworks within the church were created by Lin Utzon, daughter of Jørn Utzon.

Jørn Utzon was well known for his ability to bring references from different cultures into his work. After designing and building the Sydney Opera House, Utzon was invited to enter an international competition to design The Kuwait National Assembly Complex (Kuwait Parliament); the result was an astonishing modernist building.

The project is not only iconic by its design, but also by its location. The highest point of the main roof opens up towards the water and the rest is nicely spread on the site. The interior features replicas of Arabic ornaments and decorative details, as well as a functional grid which connects the difference spaces.

The project was, and continues to be, criticized for the fact that a foreign architect built such an important national building. The building was renovated and painted after the Gulf War, significantly changing the original look designed by Utzon. 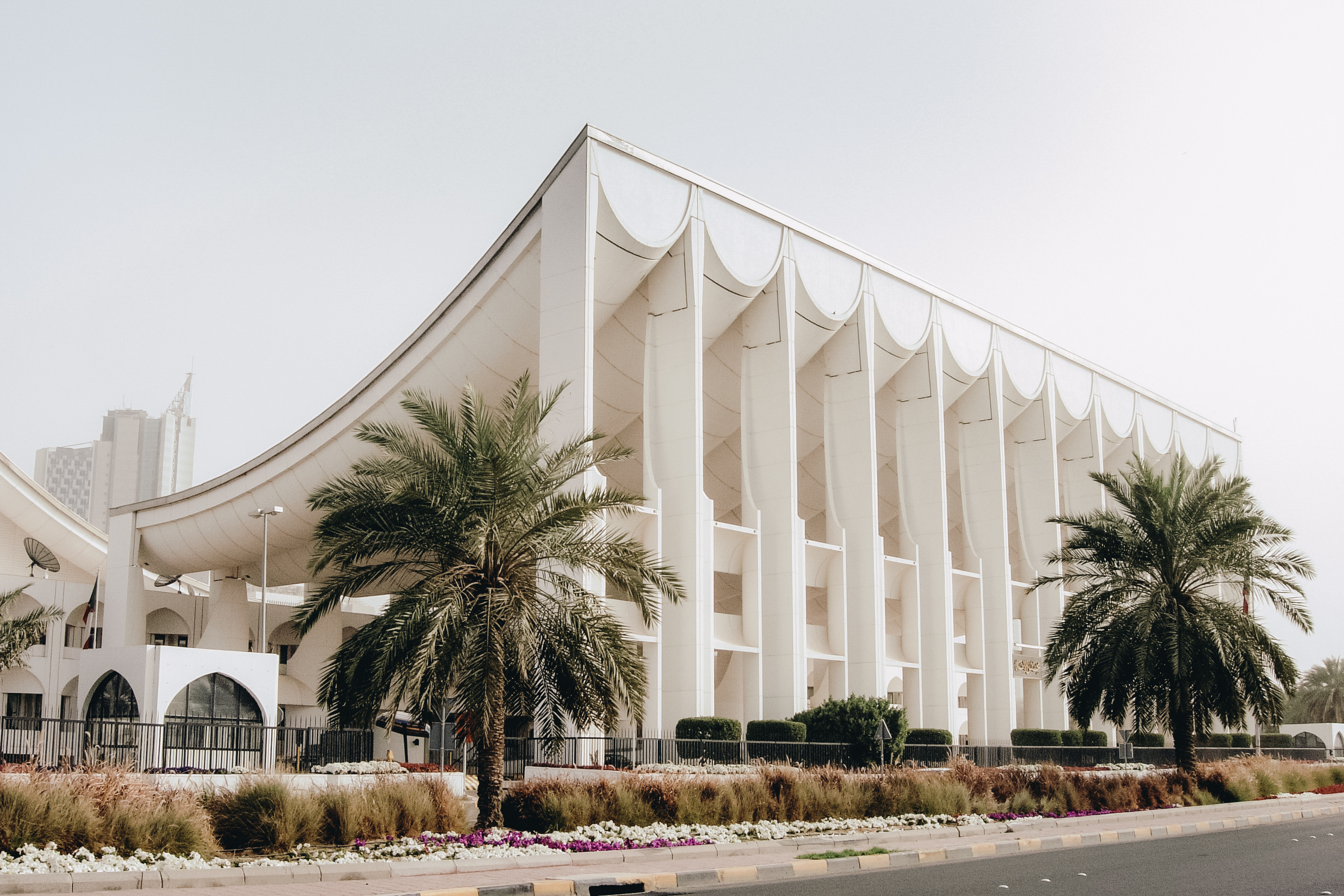