Slow Television, or Slow TV, is the term used to describe marathon coverage of an event, typically shown in real-time. The genre was first popularized in 2009, after the Norwegian Broadcasting Corporation (NRK) broadcast a 7-hour train journey.

This brief explanation has undoubtedly left you with more questions than answers. Where did this phenomenon come from? Why is it so popular in Norway? Who actually wants to watch a 7-hour train journey? All valid, which is why we’ve compiled this guide for you.

Learn all about Slow TV, including its history, why it’s so popular, and the best Slow TV shows to watch:

What is Slow TV?

The origin of Slow TV is unclear, but one could argue that it’s rooted in fine art. Specifically, Andy Warhol’s 1964 film Sleep, which showed poet John Giorno sleeping for five hours and twenty minutes. Experimental poet Ron Padgett published a sonnet responding to the film after its premiered at the Gramercy Arts Theatre in 1964, a showing which two people walked out of. The sonnet consisted of 14 lines of continuous “zzzz”s.

The concept of Slow TV is to show something at the rate it is experienced, as opposed to the speed with which a narrative drama is told. There is no editing or script, as it’s built around transition and movement instead of tension and plot. It goes beyond definitions of “naturalism,” which still condenses human experience into bitesize pieces. It is the portrayal of often mundane experiences in real-time, like a train journey or knitting, as a human would experience it.

After the success of NRK’s first Slow TV transmission, Bergensbanen – Minutt for Minutt, the station aired further train routes, a coastal boat voyage (Hurtigruten), the opening day of fishing season on the Gaula River (Lakseelva), and a 12-hour-long broadcast on firewood (Nasjonal vedkveld) which received 1 million viewers and international attention.

NRK has continued to show a handful of Slow TV shows a year, with topics ranging from journeys to meat production, academic lectures to clocks. 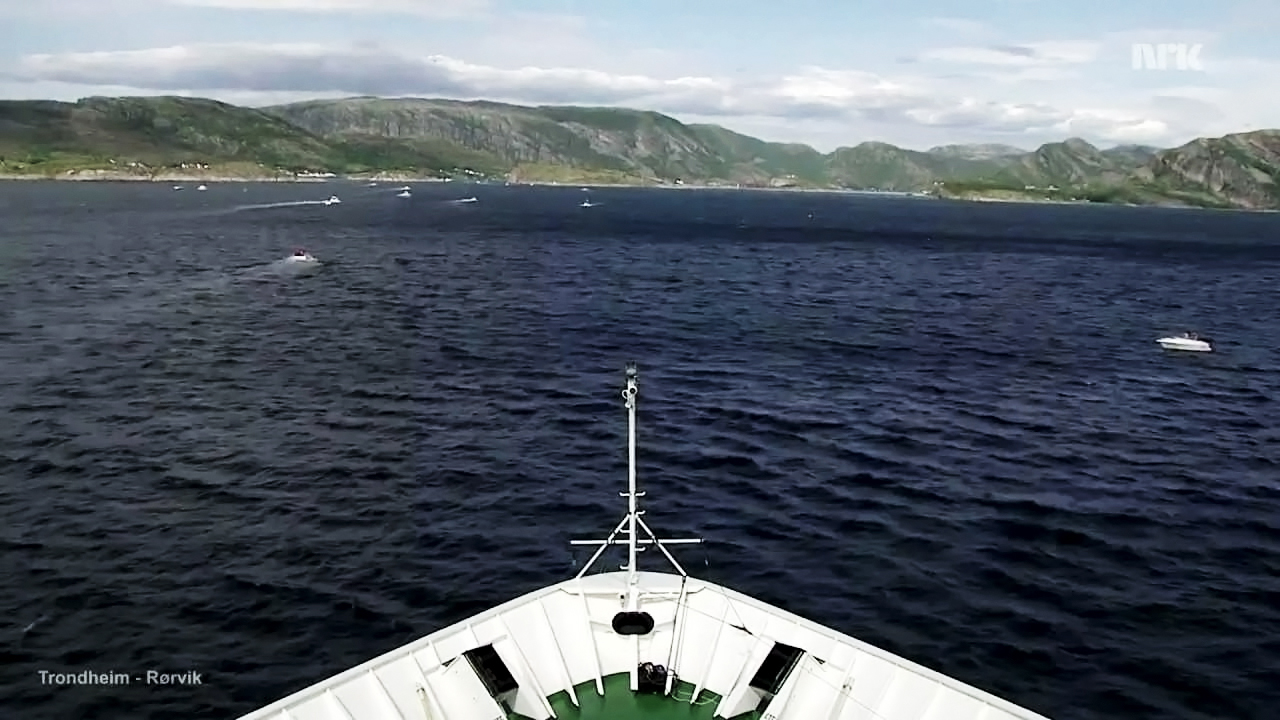 Slow TV is often grouped together with the Slow Movement: a cultural movement that advocates for the slowing down of life’s pace, sparked by the Slow Food Movement of 1986. A life lived observing the principles of slow philosophy is a life spent “savoring the hours and minutes rather than just counting them” explains Carl Honoré, a leading figure of the movement. It would be fair to say that Slow TV fits within this definition, as its passive nature allows the viewer space to reflect and contemplate, instead of feeling bombarded with information.

As New Yorker journalist Nathan Heller puts it: “Slow TV seems slow in part because, unlike our standard experience of the world, it’s unshaped by interior consciousness. Instead of drowning out its viewers’ inner lives, it seems to want to be a backdrop that can give rise to their own reflections. A slow-TV program is like a great view you encounter on vacation: it’s always there, impervious, but it gains meaning and a story depending on what it conjures in your head.”

In a world where mindfulness is often touted as the answer to increasing anxiety, Slow TV works to provide a mindful space without rejecting technological advancements. In fact, it welcomes them, as the subject matters benefit from the high definition they are filmed in. It is void of nostalgia or a yearning for simpler times. Instead, it offers a tool for navigating a future it can seem we are hurtling towards while providing a space to indulge in reflection and meditation. In short, it provides escapism by grounding the viewer in the immediate present.

The popularity of Slow TV in Norway is perhaps linked to a societal appreciation and respect of the country’s epic natural beauty, or a desire to stay connected to it despite intense modernization throughout the country.

Whatever the reason, NRK’s slow broadcasts continue to pull incredible viewing rates and nation-wide discussion. Hurtigruten, was watched by approximately half the Norwegian population and captured three wedding proposals and a glimpse of Norway’s Queen waving during its live stream.

Which Slow TV Shows to Watch

There’s no better introduction to Slow TV than the epic train journey from Bergen to Oslo which popularized the genre. Beautiful scenery and swooping train track curves are interspersed with plunges into darkness as the train progresses through tunnels. Don’t worry, there’s always a light at the end.

For anyone who finds magic in the simple lives of animals, the Piip-show offers incredible access to a small group of birds enjoying their time in a birdhouse – staged like a café – and even an errant red squirrel who makes an appearance.

Six hours of a herd of sheep grazing below the vines of Shafer Vineyards outside Napa, California. This film is hypnotic. At first they appear to not be moving, but they are in fact slowly and methodically moving across the the ground and they single-mindedly chomp on grass. There are even more nuances to be discovered after 6 hours and 13 minutes of relaxing study.

Knit along or get lost in the hypnotic rhythm of knit one pearl one with NKR’s National Knitting Evening – a 2013 live attempt to break the world record for quickest time knitting a jumper. Whoever said Slow TV was boring never watched this: they literally shear a sheep on screen.

Fireplace For Your Home: Crackling Birchwood

Netflix’s contribution to Slow TV comes in the form of a crackling fireplace. Surprisingly compelling viewing, fires have an ability to transfix us and this quality is not lost when committed to film. The roaring fire never dwindles in this hour-long show that will warm you up and slow you down.

Fireworks have an uncanny ability transform us back to our own childhoods, as we watch in awe. It’s both relaxing and joyful. Also a great way to desensitise your pets to the sounds of fireworks!