Did you know that there are alpacas in Denmark? Lots of ’em! Lots and lots of long-lashed, sleepy-eyed Danish alpacas, who I can only presume know how to pronounce “rødgrød med fløde” perfectly. Or, so Danish fashion designer Stine Sandermann tells me.

Sandermann is a rare entity in the fashion world; a designer who studied in her hometown of Herning, did a Master’s in London, interned in Copenhagen, and then decided to move back to the relatively small city of Herning, in order to produce her work.

There, Stine and her mother create custom pieces by hand from leftover sheep wool (and hopefully soon, alpaca wool) that she collects from nearby farms and has spun into yarn. My first question is how she knew about the discarded wool in the first place.

“My mother has always been really into crafts, including knitting,” Stine explains, “and when I was young I would go to these farms with her where she would collect the old wool in huge bags. I remember asking her what the farmers would do with the wool if we didn’t come for it, and she told me they would burn it. That’s the first time I realized that there was such a thing as waste, and that I could actually do something about it.”

As it turns out, not all sheep wool is considered useable for yarn; there are sheep raised specifically for the purpose of producing wool. So sheep used for other domestic purposes are shorn and the wool is thrown out. “It’s thought to be too harsh and too difficult to spin,” Stine says. One of the main difficulties is the cleaning process. “I send the wool to be spun unto yarn, but I have to clean it by hand first. Having it cleaned at the spinning mill is really expensive, so my mom and I do it instead,” Stine tells me. Lest you get the idea that the cleaning is easy, Stine dispels that notion quickly. “There’s a lot of sheep poo,” she says.

Stine, whose brand is called SANDERMANN, currently has a desk at a design and innovation co-working space, a space she won in 2017. It’s there that she receives her packages of spun yarn from the spinning mill on the Danish island of Fyn, and there that she and her mom pick bits of grass out of recycled wool.

“I feel really lucky,” Stine explains, “because I’ve been able to avoid a lot of the more expensive aspects of starting up a fashion line. There are costs, of course, but I keep them low and that’s allowed me to get further than I would have been able to do otherwise.”

Each piece is the SANDERMANN collection is made-to-order. Her non-knitwear pieces, such as tee-shirts, dresses and skirts, are made from deadstock fabric Stine has sourced from Danish textile factories. “Some of the fabric is quite old,” she tells me, “and for some of it, I can even pinpoint the latest it would have been produced because the fabric stopped being made at a certain point.” Everything is made using a zero-waste approach to draping, so that the least possible fabric is wasted when making each product. 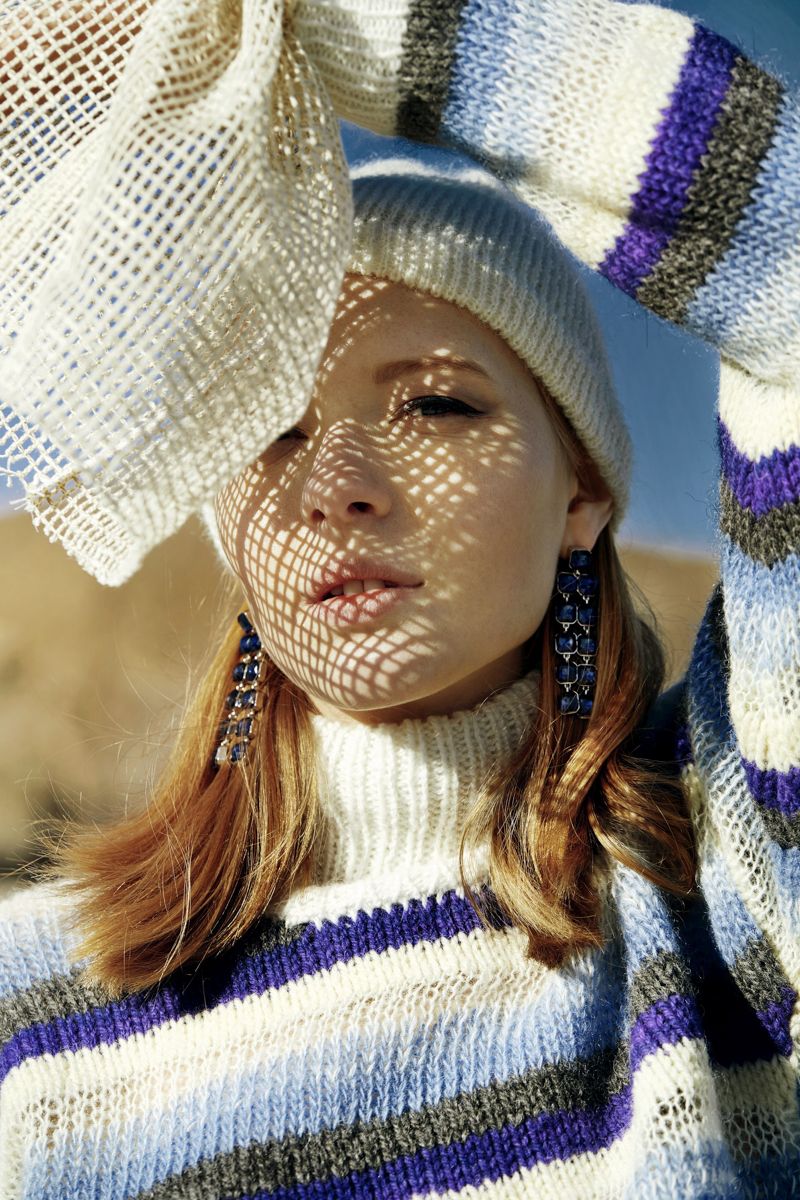 The clothes feel modern, fresh and visually interesting. Her knits in particular are timeless, promising to keep you warm for many years to come. For all the hard work she puts in to each item of clothing (making just one sweater takes a full day), the prices are reasonable. That will serve her well as she branches out from Denmark in 2018 and looks towards the UK and elsewhere.

“I’m still in the early stages of the business, but I’m looking to grow this year,” Stine says. “I’d like to avoid retail spaces for the time being and instead go direct-to-consumer with webshops, which lets me keep my prices a bit lower. But it will also be zero-waste, made-in-Denmark, mindfully and sustainably-made products. That’s what success is to me.”