“I have to apologize in advance,” Nina tells me over the phone. “I’m on a train and I may lose you at any –” and of course the phone cuts out. But within a few seconds we’re reconnected and the line holds up. “Sorry,” she says, “It’s pretty busy at the moment; I’m always on the move.”

Being the Head of Design at Swedish clothing giant Lindex, “pretty busy” might be an understatement. Especially when you’ve just announced that you’ll be launching a collaboration with none other than Jean Paul Gaultier at the end of the year.

Previously with H&M for 15 years before moving to Lindex in 2012, Nina started her career as a designer. She now oversees a team of 30 designers, within which a team of seven department leaders select trends and set their vision for the upcoming seasons.

When I ask her to describe the Lindex style, Nina pauses to think. “I’d say it’s about being comfortable and confident with the way you look yet wanting to be stylish. Our keyword is ‘crisp,’ which has to do with who we are but also with Scandinavian aesthetics in general. We always design with that in mind.”

With a classic approach like that, it’s no wonder that Lindex is celebrating its 60 year birthday in 2014. It was to honor this milestone that the collaboration with Jean Paul Gaultier came about. “We’ve done collaborations before and they’ve been wonderful,” Nina tells me, “but nothing as big as this. When we approached Mr. Gaultier and he agreed to do it, we were thrilled.”

I mean, obviously. Jean Paul Gaultier, the French designer of his eponymous label as well as the former Creative Director of Hermes, continues to be one of the most interesting designers around. His designs are instantly distinguishable: dramatic, feminine and decadent.

But perhaps not exactly in-line with the whole “crisp Scandinavian” look. “Visually, we’re coming from different places, yes.” says Nina. “But our focus is the same: designing for women who are fashion-forward. So we knew that a marriage of our styles would be special.”

Because visions of champagne-fueled moodboarding sessions are passing through my head, I can’t help but ask: what was it like to work with Gaultier? Nina laughs. “It was wonderful. And completely new. At Lindex, design is very team-based. I think that’s a Swedish, or Scandinavian, thing in general. But with Jean Paul, he is the central figure in the design process. His brand depends entirely on what’s coming out of his head. It’s quite amazing, actually.”

So given his level of involvement, I ask, did it take long to get a collaboration going? “Jean Paul’s energy level is incredible. We started with a 25-piece collection and that quickly ballooned past 30. In addition, because we’re both so interested in lingerie, we did a whole collection of undergarments as well, which are beautiful.”

Uh, Jean Paul Gaultier lingerie at reasonable prices? Consider me (and every single piece of the collection) sold.

Lindex is a company concerned with more than fashion; 10% of the proceeds of this collection go to Pink Ribbon, an organization that provides support for Breast Cancer research. 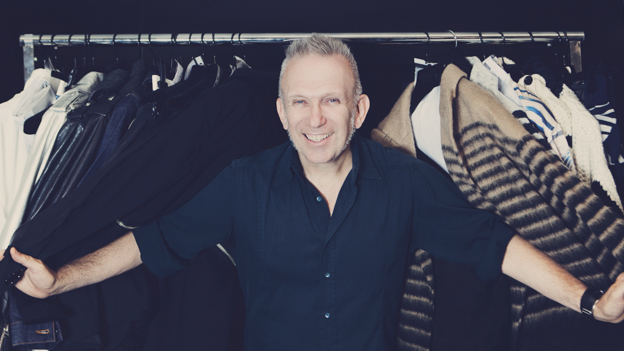