There’s nothing like walking into a business meeting to a welcoming pot of aromatic, warming tea. So imagine the smiles on our faces when Creative Director Freya and I walked into the NUTE office to no less than three pots of tea (they were big smiles, for the record).

Brand architect Stine, who has been instrumental in not only the conceptualization but also the production of NUTE, poured out perfectly brewed cups for each of us to try before presenting the NUTE vision and model in the Chokolade Compagniet headquarters in Copenhagen.

One of only two brands designed entirely by Chokolade Compagniet (the other being the excellent Estate Coffee), NUTE is a fresh take on gourmet tea in Scandinavia. Launched in 2013, the focus is not only on the flavor profiles but on the packaging and branding. The overall effect is a tea that combines the tastes and aesthetics of the Nordic region.

With unique wooden cannisters made from natural birch and labels rendered in rich colors with white font, the design of NUTE is nearly as important to its identity as the taste. As Stine takes us through the history of the brand, she also describes the trail and error involved in creating an overall brand strategy.

“The bottoms of the labels come in different shapes, ” she notes. “That denotes what kind of tea it is: black, green, white or red.”

It’s a subtle visual way of distinguishing the varieties of tea as well as creating aesthetic diversity within collection. These thoughtful touches are what set NUTE apart as both a tea and a design brand.

“We go to design fairs and are sold in design stores like Illums Bolighus, in addition to selling in food markets like downstairs at Magasin.” Stine tells us. “It shows us that people see us not only as a tea but as a representative of Danish design. That’s important to the way we market and sell.”

With exciting additions to tea such as rhubarb, rose hip and blackcurrant, NUTE tastes as good as it looks.

NUTE creates flavor combinations that draw from the long tradition of tea-making in countries such as China and India, while bringing in new aspects of Scandinavian nature and seasonality. Their latest, the Spring tea, is a green tea that combines elderflower, peppermint and licorice root.

As we taste this new tea for the first time, it’s clear that the blend encapsulates both Spring and the Scandinavian countryside. It’s a light and fragrant, without the bitterness that sometimes follows green tea. That crispness also makes it perfect for iced tea, somethinng we’re looking forward to trying as the weather improves! 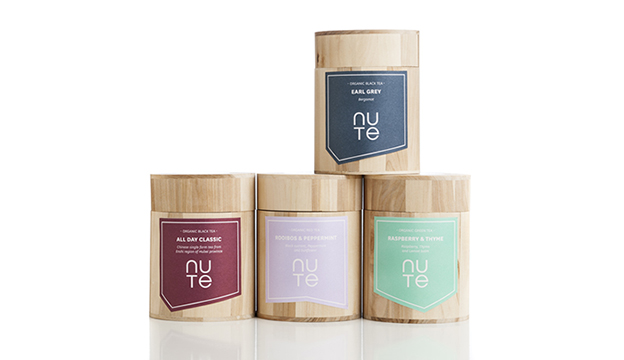 If you’re looking for a food item that captures the aesthetic and taste of Danish spring, or Swedish summer, look no further than NUTE.