Fashion weeks in Scandinavia are increasingly improving, both in terms of the organisations themselves and the designers on display. This year, we saw a few powerhouses break through from domestic success to the international level. In particular, Danish brand Ganni is leading the charge into the US market. It will be interesting to see how this continues, and what other brands cross the water, in the coming seasons.

On both the runways and on the streets, we saw more color than ever before throughout the Scandinavian fashion weeks. Though the runways were overloaded with yellows (more on that below), there was orange, bright green, purple, and hot pink as well. It was a fun, festive series of fashion weeks and maybe, just maybe, the colors will stick around for the winter season as well.

There are the trends we saw on the runways of Copenhagen, Stockholm, and Oslo fashion weeks for SS19:

At its core, minimalist dressing cuts away all the unnecessary extras and becomes entirely unisex. It’s no surprise, then, that there are quite a few Scandinavian designers who have taken that core – clothing is simply about being clothed, free from the gender-binary – and explored it in a variety of interesting, artistic ways.

Stockholm Fashion Week presented the most interesting and poetic take, with brands Lazochmidl and Emilie Jarnell highlighting how adornment is not just for femme dressing, and Busnel highlighting the androgyny in clean lines.

At Copenhagen Fashion Week, both brands Heliot Emil and Han Kjøbenhavn envision a futuristic world in which all of us wear the same spandex and bondage-style holsters. We particularly loved Han Kjøbenhavn’s use of transparent floral print.

Norwegian brand O-F-C (Office for Form and Contexture) took tailoring to new levels of weird and wonderful, while maintaining a level of sleek minimalism that made the pieces wearable. This is office-wear for the avant garde and we are here for it.

Color was big this season, but no color was quite as pervasive as yellow. Though a range of shades were represented, creamy rather than bright yellows seemed to dominate. At Copenhagen Fashion Week, we saw Blanche, Baum und Pferdgarden, Holzweiler, Morten Ussing, Martin Asbjørn, Lærke Andersen, and Stine Goya and present their take on the color.

At Oslo Runway, ByTimo and Camilla Thulin both highlighted yellow in ultra-feminine silhouettes. During Stockholm Fashion Week, Ida Sjöstedt went dreamy creamy, STAND had the whole spectrum of yellow (sometimes in one outfit!) while the always-exciting Naim Josefi kept it bright and cheerful with near-neons.

90s Are Still With Us

Oh, did you think the 90s revival was over? You couldn’t be more wrong! Ganni led the pack at Copenhagen Fashion Week this season with an entirely 90s-inspired collection, including tie-dye, droopy backpacks, and red-laced hiking boots that are set to be THE shoe of the winter (so functional!). Other CPHFW 90s moments included the Dawson’s Creek-style short-sleeved button-down open over tee-shirt look at Martin Asbjørn and the full-on Cher Horowitz moment at Résumé.

At Olso Runway, designer darling Michael Olestad gave his 90s inspiration a contemporary update, particularly with a runched, beautifully-draped slip dresse over a white tee-shirt. At Stockholm Fashion Week, NAND brought out snake skin print, which we can expect to see a lot more in terms of accessories, and paired an oversized blazer with bike shorts.

Time to stop it with the bucket hats, people. They look good on literally no one! Runway shows that were doing the most this season included Danish Blanche and Ganni, Swedish Ida Klamborn, and Norwegian HAIKw/.

It’s rare we see a piece of clothing that’s really different, but the Karine Næss Quilted Mini Skirts were fun, not exactly functional, and had nods to both mod and workwear dressing.

It was so refreshing to see Emilie Helmstedt’s DIY presentation, which featured her silky, quirky clothes against a backdrop of hand-made fabric fish and set pieces straight out of a high-school performance of “The Little Mermaid.” It was cool, charming, and unpretentious.

Perhaps the most breathtaking runway show of the season was Selam Fessahaye at Stockholm Fashion Week. She says her inspiration for this collection was “getting shit done,” and well, she did it. The surrealist level of the colors and cuts had us wanting more. 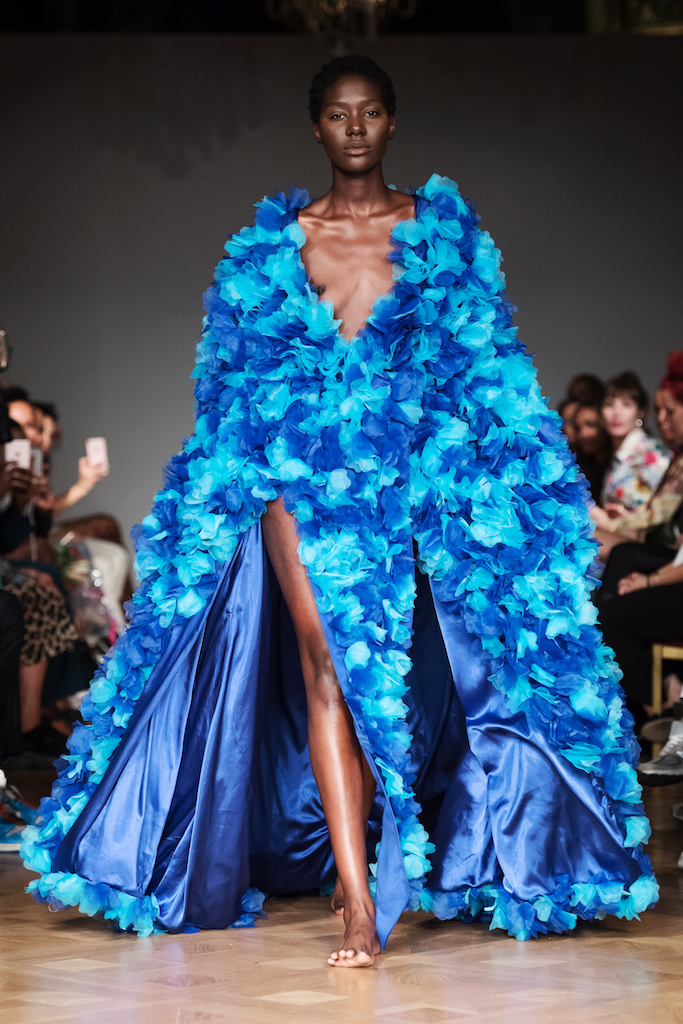