Public libraries in Scandinavia are well-designed and intended to strengthen the social fabric, reflecting the region’s history and values. The Scandinavian nations started developing their first purpose-built libraries around 1900 and as the welfare state developed from the 1930s onward, they took on added importance as democratic institutions.

Architecturally, designs shifted from the grandiose historical styles to a simpler, Functionalist approach. Indicative of their civic importance, libraries were often located alongside parks or public plazas.

After the WWII, Scandinavian libraries broadened their role, also offering cultural space and hosting community activities. More recently, libraries have taken on the added role as catalysts for urban revitalization.

Take a look at the most iconic Scandinavian libraries:

One of Copenhagen’s architectural icons, this complex exemplifies the evolution of Scandinavian libraries.

The Royal Library dates from 1906, an upgrade from a nearby 1673 building (now the National Archives). Designed by Professor Hans J. Holm, it features an eclectic mix of historical precedents. Reflecting its times, the Royal Library was built as a “temple of knowledge” with brick facade, towers, clerestory windows, ornate details, and chandeliers. A 1968 extension which tacked on a Functionalist wing on one side, was generally unloved.

Much beloved, on the other hand, is the Black Diamond (Den Sorte Diamant), a major expansion which opened in 1999 and is named for its dark granite and glass facade. While the 1906 building was preserved, the 1968 addition was reclad to fit with the new facade.

Functionally, the Black Diamond integrates with Holm’s building, linking to it with glass bridges above a city street. Designed by Schmidt Hammer Lassen architects, the seven-storey building extends the library to the waterfront and its soaring atrium provides stunning harbor views. It is beautiful and welcoming (and, incidentally, was Scandinavia Standard’s first home).

Besides new library space, The Black Diamond also includes an auditorium, photography museum, and eateries. Adding to this cultural milieu is the Danish Jewish Museum designed by Daniel Liebeskind, located in the Galley House, an early 1600s structure located within the 1906 building.

The Stockholm Public Library of 1928 by architect Gunnar Asplund was one of the first Scandinavian library masterpieces and remains a favorite of bibliophiles and architecture fans worldwide.

It is a well-proportioned building with a rectangular base topped by a cylindrical, flat-roofed centre tower. The facades are covered by un-ornamented, orange stucco resembling clay, which nicely complements its green park setting. Located on a hilly site and reached via slightly rising walking paths, it is on a pedestal, but a modest one.

That rounded core created one of the world’s great library spaces: a rotunda enclosed by curved bookshelves and topped by white walls and a slightly recessed high row of windows, bringing in diffused natural light.

Architects Flemming Lassen and Erik Møller established a new template for Scandinavian libraries in this small Danish town by “combining traditional and modern elements,” according to architectural historian Nan Dahlkild.

Nyborg Library sits on a narrow peninsula, with landscaped gardens on the north and south. Human-scaled rather than monumental, its unadorned red brick walls follow the canal shorelines and its sloped roofs echo nearby historic buildings. Consisting of two wings, the larger housing public areas and the smaller containing support spaces, they are connected by a small glass-walled entry hall. 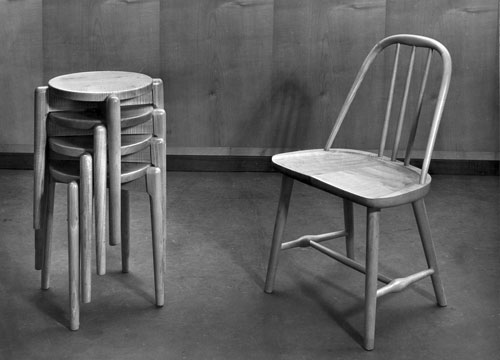 Inside, its one-storey open layout features custom wood paneling and furniture by designer Hans Wegner, then just out of school. Arne Jacobsen designed the clocks and lamps. A truly Danish collaboration!

Another 1930s library that has been highly influential is the Viipuri (now Vyborg) Library of 1935 by Alvar Aalto, in an area that Finland lost to the Soviet Union in World War II.

Aalto subsequently designed several other libraries, including Nordic House in Reykjavik. Completed in 1968, it typifies his humanistic Functionalism and the Scandinavian library model he helped create.

At its core is a lending library with wood finishes, clerestories, and a skylight. Nordic House is a regional cultural centre also providing children’s areas, an auditorium, meeting rooms, restaurant, and exhibition space, facilitating its active use throughout the day and night.

Set in a nature reserve, the building’s low horizontal base is lined with smooth white walls and glass. Above this rises a blue-tiled vaulted volume with a sloped roofline resembling nearby mountains.

No less a gem than Copenhagen’s Black Diamond, this beautiful library expansion by Danish architect Henning Larsen on the Swedish side of the Øresund Bridge opened two years earlier than its more famous counterpart.

The Malmö City Library extension’s airy main hall has open mezzanines and expansive glass facades looking onto a park. It is connected to a 1901 library building by a smaller conical entrance pavilion, an arrangement reminiscent of Nyborg Library, albeit on a larger scale.

The old building was designed by architect John Smedberg as the home of the Malmo Museum and the library moved there in 1946. After the expansion opened, the old building was renovated and reopened in 1999 with a new glass roof enclosing its central courtyard.

The town of Vennesla (population 14,000) in southern Norway demonstrates that world class libraries can exist at any size.

Designed by Helen and Hard architects, it is shaped by 27 curving timber “ribs” which act as columns and framing for the roof. They also hold recessed light fixtures and air conditioning ducts, and blend into wooden bookshelves and seating. This structure creates an open layout and vaulted ceiling that makes the facility seem bigger than its 1,938 square meters (20,860 square feet).

Besides books, it has classrooms, exhibit space, and a cafe. It is also integrated with neighboring educational and community buildings, creating a whole greater than the sum of its parts.

This isn’t the only iconic Norwegian designed library. Showing that good design is valued across borders, Oslo-based firm Snøhetta designed the Alexandria Library in Egypt, which opened in 2001, and more recently Canada’s Calgary Central Library in 2018.

Opened in 2018, this sculptural three-storey building by ALA Architects is as much a public meeting place as a library.

It has books and features the latest technologies (book-shelving robots) and energy efficient systems, but there are programmatic innovations too. One can borrow other things like power tools or hang out in a computer gaming room. It also offers now typical features such as dining options, meeting rooms, and a cinema.

Oodi (“ode” in Finnish) provides a nearly seamless transition between neighboring public squares and its spacious column-free, glass and wood enclosed ground floor lobby, thanks in part to long operating hours and a wide range of amenities and programs. 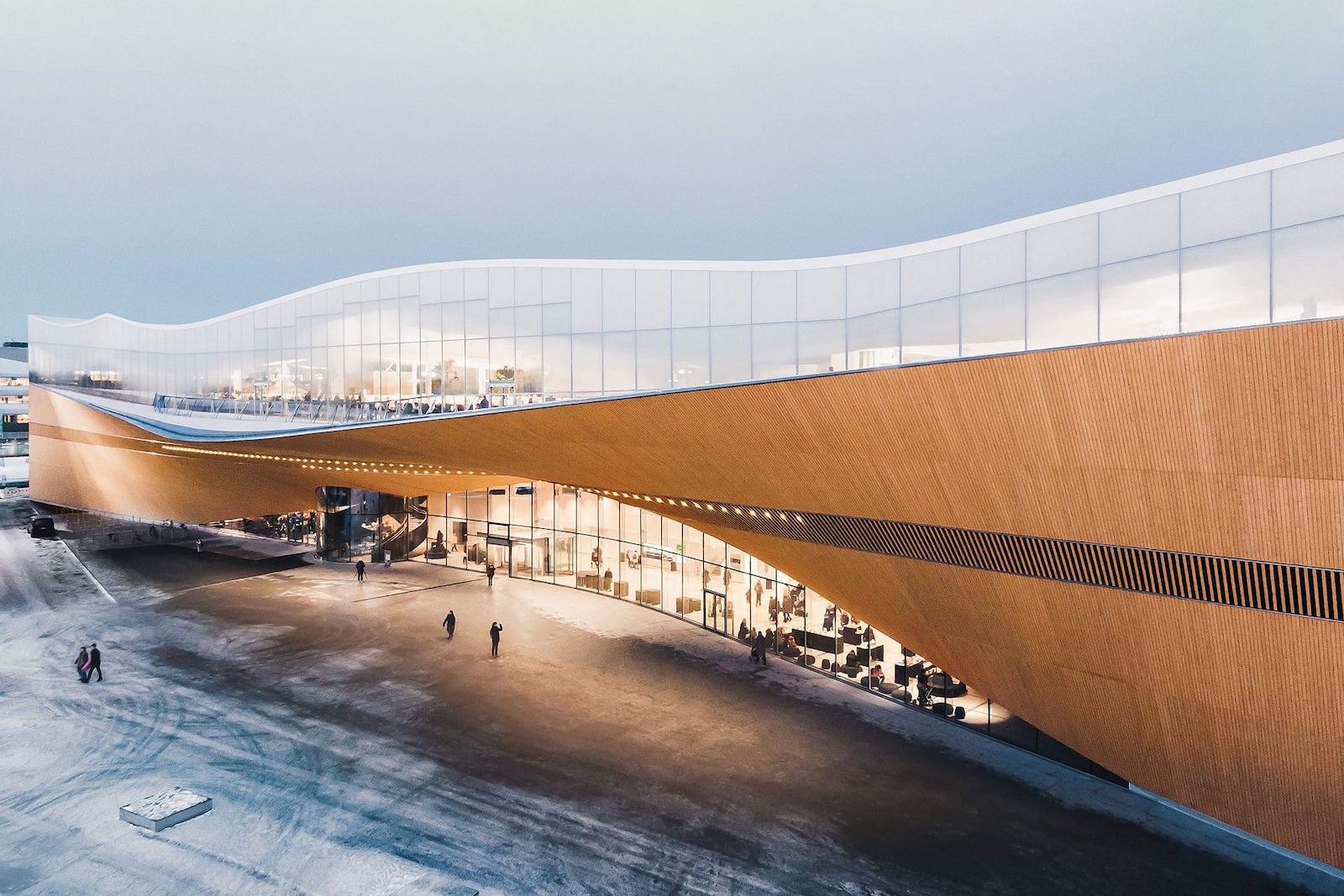 The open ground floor is contrasted by the middle floor of rooms and studios, while the top level includes a “Book Heaven” reading room. Something Aalto once wrote applies to this and the other libraries discussed here: “to make architecture more human means better architecture, and it means a functionalism much larger than the merely technical one.”