In Scandinavia it is a tradition to celebrate holidays by singing, whether it’s Christmas, St. Lucy’s Day or Midsummer. My personal favorite is a mischievous Danish song that children sing on Fastelavn: 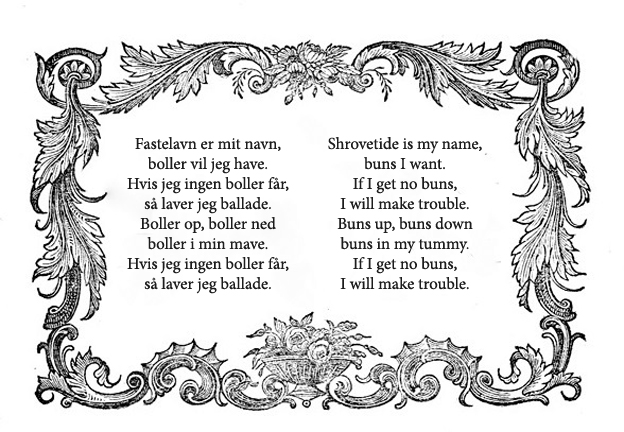 I completely agree. If I get no buns I will make trouble.

As a matter of due diligence, I scoured Copenhagen in search of the best fastelavnsboller. I was not disappointed. But first:

What exactly is Fastelavn?

For those of you who don’t know, it’s a kind of Nordic Carnival, celebrated seven weeks before Easter in Denmark, Norway and Iceland. It’s mostly celebrated by children who dress up in costumes, similar to Halloween. In the middle ages, it involved putting a cat in a barrel and beating it. Yes, beating it. This was done to ward off evil, embodied by a black cat. People dressed up in costume so that evil spirits wouldn’t recognise them. Eventually the barrel would splitter, and the traumatised cat would run from the town (never to return if it was smart).

To the relief of cats around the world, the Renaissance came. Reason took the cat out the the barrel and replaced it with sweets. After all, people still want to have fun.

Fastelavnsboller, or Fastelavn buns (sometimes called semla), are also part of the tradition. Every holiday in Scandinavia, big or small, has a specific food attached to it (one of my favourite aspects of Scandinavian culture!). But here’s the big question:

Where can I find the best fastelavnsboller or semla in Copenhagen?

I thought it was time for someone to bite the bullet (or bun) and find out! On my journey, I found out the there isn’t ONE ultimate fastelavnsbolle but a variety to suit your Fastalavn needs. Oh boy, here we go: 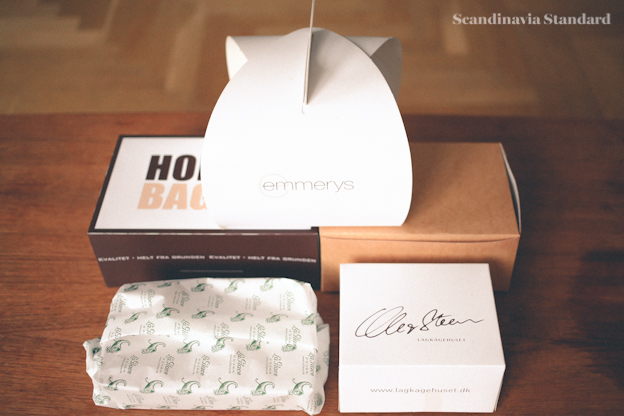 This is the traditional fastelavnsboller: a sweet doughy bun. Inside there is a soft custard and chocolate on top. This type of fastelavn bun isn’t available in all bakeries: La Glace and Holms Bager don’t make them, while Emmerys, Lagkagehuset and Meyers Bakery do. 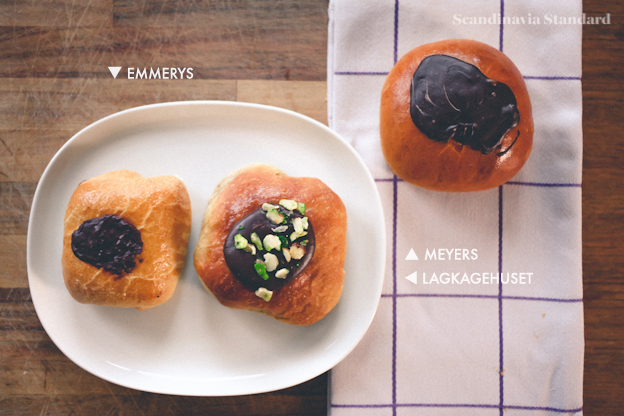 This is my favourite type of fastelavnsbolle, and I was particularly partial to the Emmerys and Meyers buns because they’re organic. The chocolate on top of the Meyer’s bun was a crunchy, real chocolate in perfect ratio to the bun, while the Emmerys bun had a very nice delicate cream in the centre. After a lot of chewing and philosophising, it was clear which the winner was Lagkagehuset. This bun had an superb gooey quality that was just right. The plan was to share all the buns with my friends after shooting and testing them, but I don’t know what happened. It’s a mystery. Big fan of the pistachios on top. 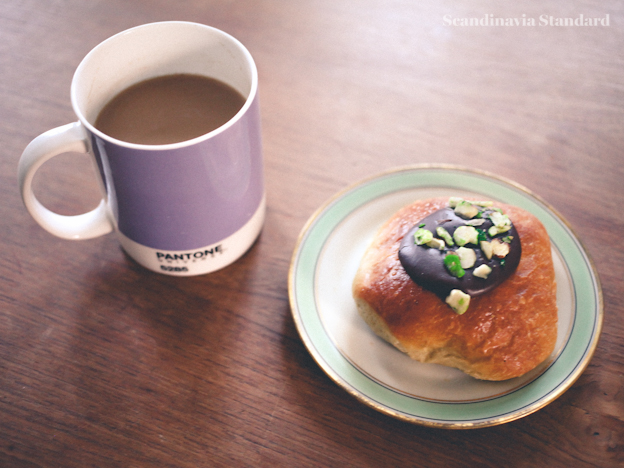 This is  made out of normal weinerbrød (otherwise known as a “Danish”) with whipped cream on top. Some people refer to this form as the “Danish” fastelavnsboller as it’s unique to Denmark. It is a variation on regular Danish pastries that are available all year round, with the addition of cream or jam or both.  You can find this type of fastelavn bun in almost all Danish bakeries. 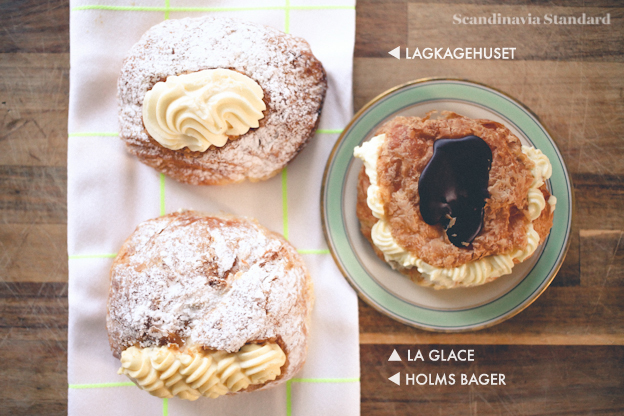 This was a really hard decision to make. Lagerkaghuset’s was a strong contender; perfect for cream lovers. Holms Bager was light and fresh.  In the end, La Glace’s combination of cream and delicious chocolate on top made me feel like I’d stepped into my Danish grandmother’s kitchen. I actually never met my Danish grandmother but I’m pretty sure she’d make this!

This one wasn’t a very fair race. Dare I say it was unscientific? Le Glace didn’t have a completely plain version to control the variables. And remember: Holms and Lagkagehuset have other flavors that look appetising. My conclusion: they were all pretty damn good! 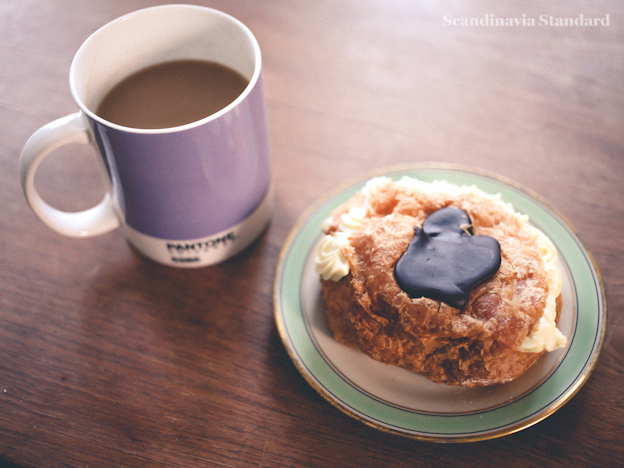 There is also a version with a gooey pastry creme in the middle instead of whipped cream: 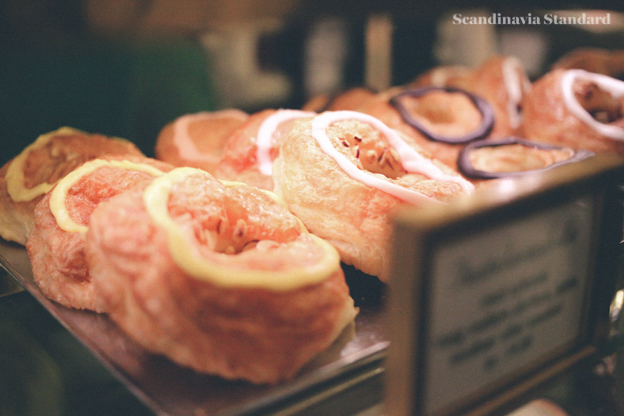 So there we have it: the story in which Freya, your intrepid field reporter, ate a month’s worth of fastelavnsboller in one day! I actually do feel a bit sick as I write this.  But I will always have a soft spot for fastelavnsboller. 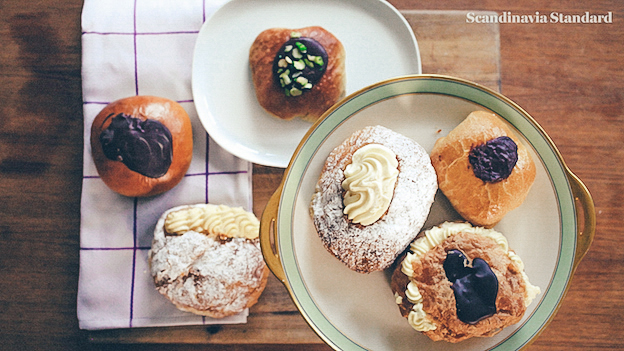