Before moving to Denmark, I had never celebrated Christmas. So it was with absolutely nothing to compare it to that I learned how to celebrate the Danish way.  Danish Christmas, or Jul, is all about family, food and tradition. Here’s what’s happening; after reading this, you can celebrate like a full-on Dane or pick and choose your favorite parts (it’s the food, right?!).

Whether or not you’re looking to celebrate, it’s always fascinating to learn about the traditions surrounding major holidays. To those of you only in it for the research, enjoy my ethnographic study!

Discover the traditions, feasts, decorations and songs that that make celebrating Christmas in Denmark so unique:

Another pre-Christmas tradition, markets pop up all over the country selling handmade crafts and treats. It is delightful. Tivoli has a large market that runs from November until the new year, but there are plenty that are free to enter and are just as lovely.

This Danish Christmas tradition starts about six weeks before the holiday itself. Long dinners or lunches are held by work places, friends and family. It’s hygge at it’s finest: loads of food, drink (especially snaps!), a beautiful table and good company. If you’re invited to a julefrokost, don’t expect it to be an eat-and-run situation. These can last all day/night and seem to be an excuse to get seriously plastered. So, cheers! Also: don’t drink and drive.

Danish decoration is relatively subdued. Lots of candles, lots of pine-inspired decor. Colors tend to be white, red, gold, silver and green. There aren’t a lot of outdoor lights on personal homes or apartments, but the main streets of the city do get dressed up.

As is the way with most Scandinavian decor, go for the minimalist, the nature-inspired, and keep the color palate simple. Typical Danish decorations that both kids and adults can make are Julehjerter (Christmas Hearts) and Julestjerner (Christmas Stars) and other julepynter (Christmas ornaments). They’re made from folded paper and can be hung up with string. 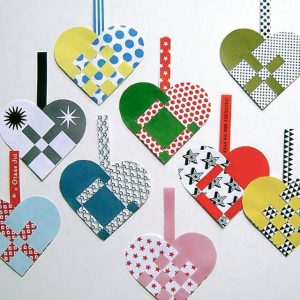 Hyacinth and Amaryllis bulbs are popular to display around the house and for dotting a festive table setting. The bulbs can be found inexpensively at supermarkets and florists. I happen to love the focus on plants; my apartment turns into a bit of a jungle in winter. 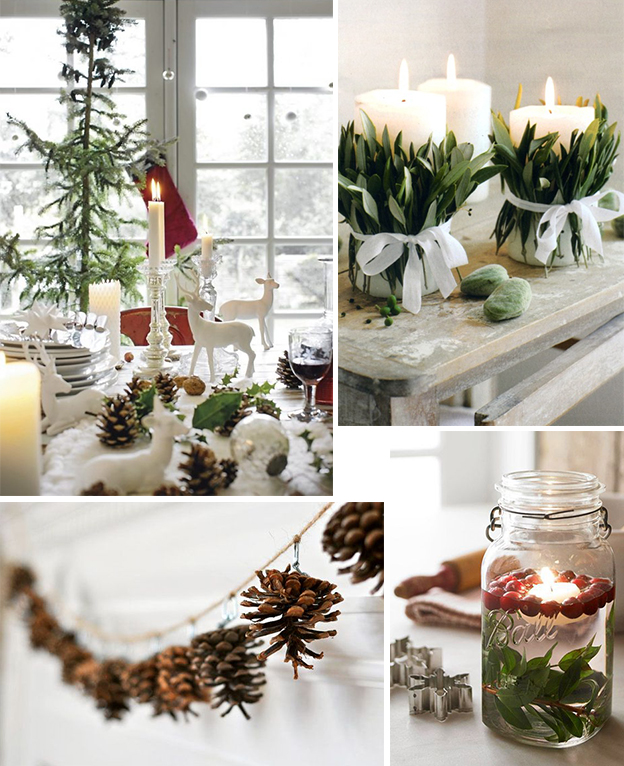 Time off? What a concept! Offices and stores are closed on the 24th, 25 and 26th. Maybe it’s a matter of necessity (there’s nothing open! Need some toilet paper? Time to dig out those paper napkins), but most people seem to geniunely take time off during the holidays. No phones at the table, no computers out in the mornings. Just three days days of solid family, friend or relaxation time. I’m still getting used to it but I kinda like it (a lot).

There is a virtual shutdown in the country during this time. In order to allow everyone to enjoy dinner with their families, the city buses stop running between 17.30-22.00. In Denmark, the electricity and gas utilities see a spike in use when people start their ovens for roast duck, roast pork, or roast goose.

A traditional Christmas lunch with with karrysild (herring in curry) danish open-faced sandwiches on rye-bread and æbleflæsk (apple porridge with pork) is usually followed by a group nature walk. Most shops and restaurants in Denmark are closed on December 24, 25, and 26. 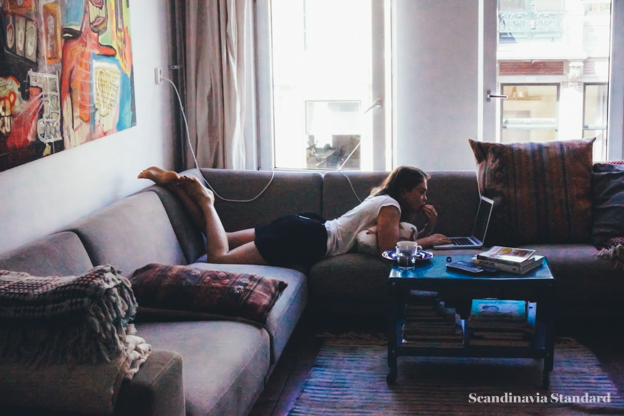 Now for the good stuff! I should preface this by saying that I did not grow up with the kind of food Danes eat during Christmas. Duck and pork weren’t on the menu for me as a kid, and we weren’t a big cabbage or potato family either. I had never even tried marzipan until I moved to Denmark.

Here’s an outline of the elaborate main Danish Christmas meal that is eaten on the evening of December 24:

Christmas Eve dinner is hyper-traditional. Duck and flæskesteg with crispy pork rinds, as well as boiled potatoes, caremlized potatoes, brown sauce (gravy) and pickled red caggage. If your stomach isn’t used to this kind of food, be prepared for things to get gassy. Regardless, it’s a hearty, old-fashioned meal that leaves most people sleepy and satisfied.

Note to vegetarians & vegans: this menu isn’t the kind where you have enough side dishes to make up for taking out meat, so if you’re going to someone else’s home for the meal, consult the host and/or bring your own main dish! 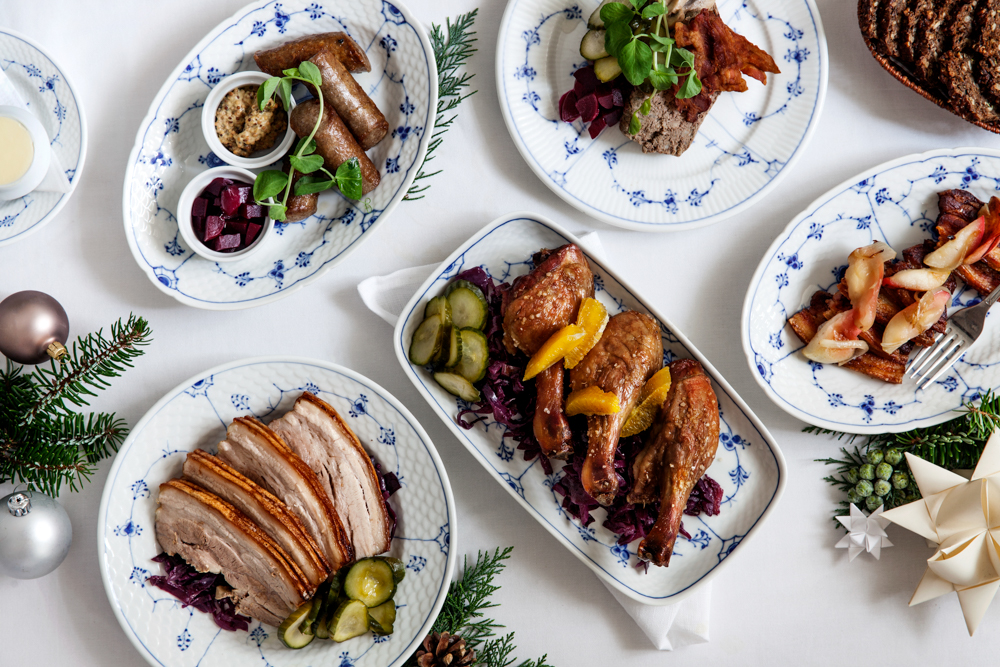 Dinner is, naturally, followed by dessert. Ris a l’Amande. Good god, people, Ris a l’Amande. It’s a cold, creamy rice pudding made with vanilla and almond slivers, on top of which you pour hot cherry sauce. And then eat FOREVER. Traditionally, it is made the day before or in the morning and set out during the day to prevent Nisser (elves) from playing pranks.

The game with Ris a l’Amande is that the host mixes in one (or more) whole blanched almond. If you find the almond, you get a prize. And you have to keep eating the pudding until someone finds the almond.

So usually, the person who finds the almond will hide it under his/her tongue or discreetly spit it into a nakpin until everyone has eaten so much that they’re on the verge of death.

Then the winner, high on adrenaline so he can’t yet feel the effects of his gluttony, shows off the almonds and laughs and laughs until you are forced to projectile vomit right into his smug face. Or, whatever! Maybe this sounds like I’m not into the whole thing but I really am. I loooove rice pudding. 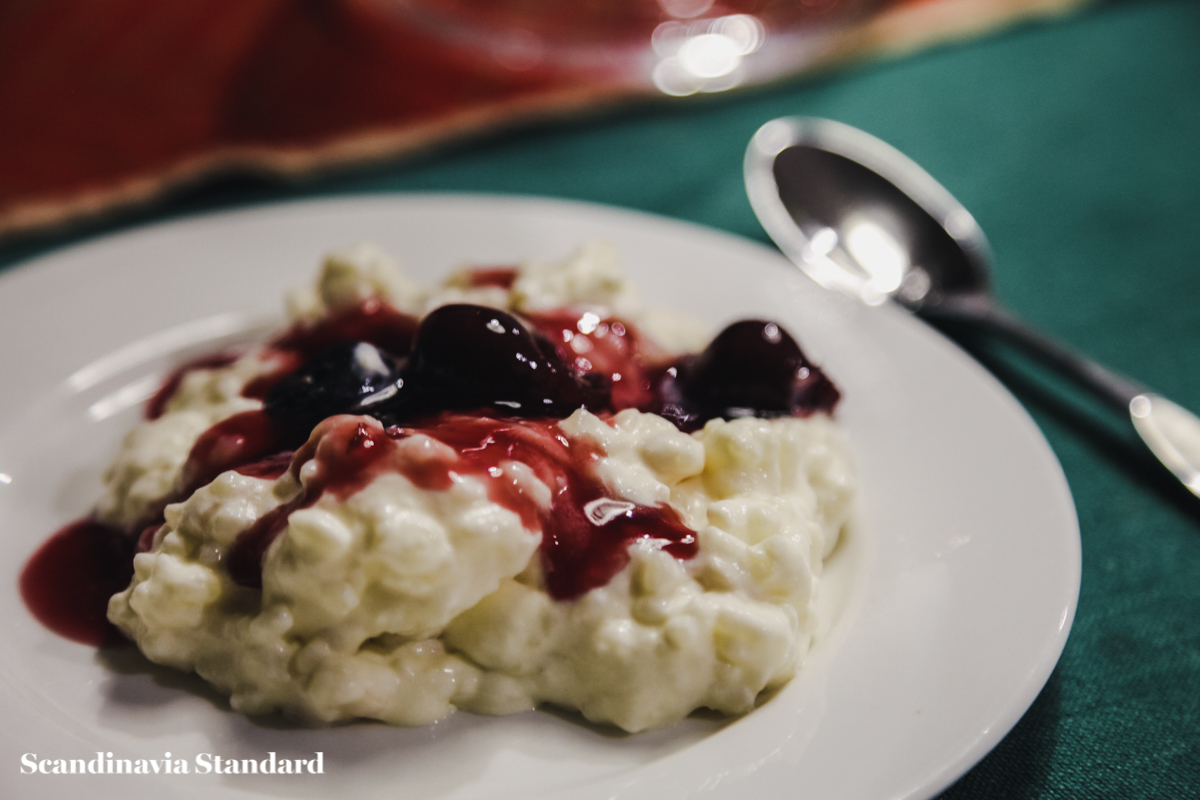 There are plenty more sweet things to enjoy, for those of you who like that sort of thing. A personal favorite is æbleskiver, which have no apple in them (although they apparently used to. Too healthy I guess?). They’re fried dough balls that you dip in jam and powdered sugar. Although I’m usually a big fan of making things at home, I don’t have the special pan to make them so I buy my æbleskiver frozen from the supermarket and they’re delicious.

Marzipan is ubiquitious. My husband’s family makes little marzipan figurines, dips them in melted chocolate and adds extras like nougat or nuts. It is possible that I become vaguely type-A during these sessions and attempt to reconstruct Michaelangelo’s David.

Chocolate, of course, is another big one. But there’s not as much chocolate as you would think (or like). The far more popular cookies are gingerbread-style; crispy, peppery and perfect with coffee or port.

Which brings us to drinks. So many drinks. I can’t drink like a Dane; this is something I’ve come to accept after a few very poor attempts to go glass-for-glass. I’m just not built that way, and it’s fine. But Danes can seriously drink and Christmas is the big leagues.

The whole Christmas season kicks off on the first Friday of November with J-Day, the day Tuborg Julebrygg (Christmas Brew) is released. It’s available for only ten weeks a year and still manages to be Carlsberg’s fourth best selling beer, which is indicative of the kind of drinking that goes on around the season.

Glögg, a hot spiced wine with almonds and raisins, is served at most markets and at many a party. Kids will have hot chocolate (adults can too!). During Christmas itself, wine or beer is served, as well as traditional aquavit. The meal is often finished with an apperetif like port or cognac.

What I’ve always admired about Danish drinking habits is that there’s no pressure. Although the Danish culture includes a lot of beer and liquor, if you don’t drink, no one is going to get on your back about it. It’s all very joyful and inclusive, so if you’re not a drinker or need to bow out early, don’t feel awkward.

Walking Around the Christmas Tree

If something can be both weird and adorable at the same time, this tradition nails it. After dinner but before you open presents, you and your family or friends will join hands, sing Christmas hymns and walk around the tree. As the story goes, this is to give Santa Claus time to deliver his gifts. To get the adrenaline flowing, the tree is dotted with actual lighted candles.

So we’re clear: the tradition is to walk briskly around what is essentially a 7-foot high pile of kindling that has wax sticks of fire precariously perched on its outermost layer, just reaching out for human contact. But it’s fun! And very sweet, if a little terrifying for newbies like me. 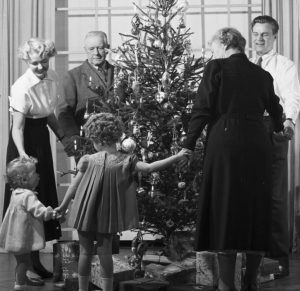 It was recently brought to my attention by Danish friends that Christmas dinner in Denmark is a form of torture for children. This is because instead of opening presents on the morning of the 25th, Danes open their presents after dinner on the 24th. While this may seem like a way to get presents faster, it is actually a way to make children hate eating dinner with their adult relatives. But, hey, tradition!

And while I’m certainly sympathetic to impatient kids, it must be said: having to wait through a fabulous dinner for a gaggle of presents is not the WORST. You know? Let’s all take a moment to reflect on that. 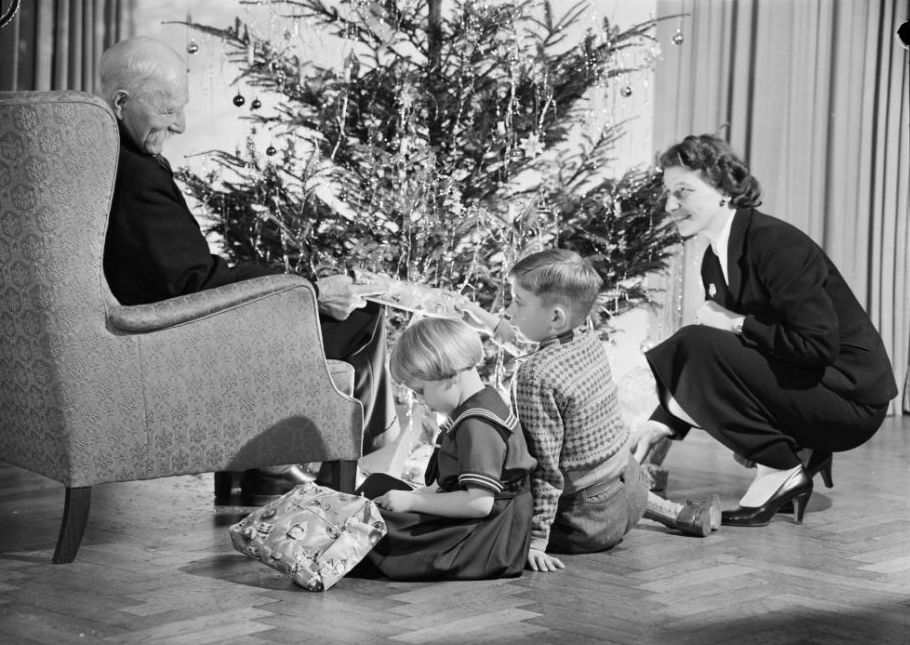 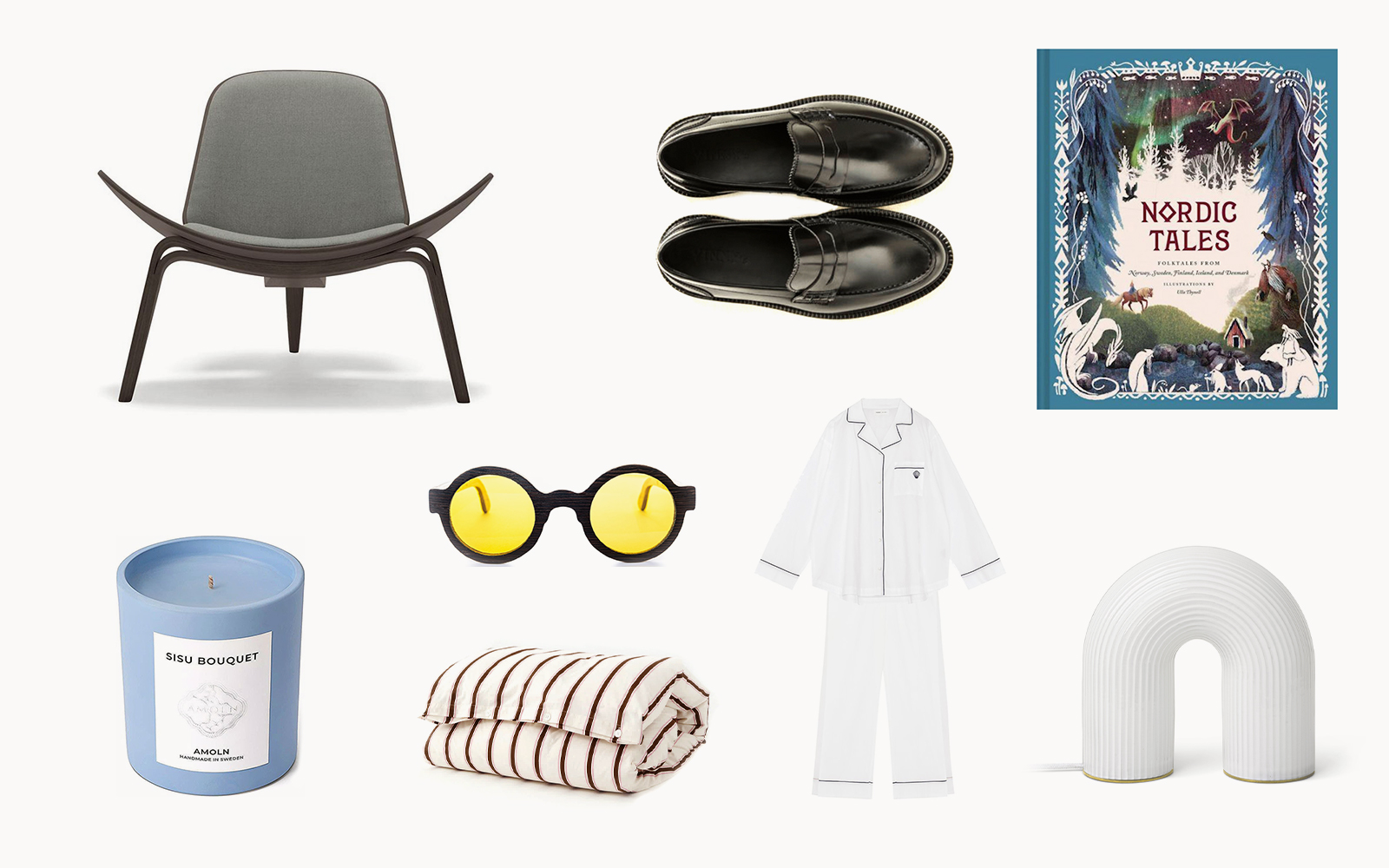