Have you ever stood around a group of grown men slurping spoonfuls of exotic espresso, dressed in burlap aprons? Of course you haven’t, your life is normal. But if you ever find yourself at the The Coffee Collective roastery, office and cafe on Godthåbsvej, you might encounter such a situation so let me give you the tools to handle it.

Maybe you’ve already heard of The Coffee Collective – four men who broke out of the traditional coffee industry in Denmark to start their own innovative business. Klaus Thomsen, one of those four, met us at their multi-use location to give us a rundown of what, exactly, makes their work so different.

It would be easy to dismiss The Coffee Collective as another hipster project selling expensive coffee and throwing around words like “direct trade” without any real substance. If that’s what they were about, you can be sure we wouldn’t be covering it here. Instead, Klaus gave us insights into not only the building of their highly-stylized front of house, but also the passion and ethos behind their business model.

Launched in the summer of 2007, the four founders have been equal partners from the get-go. Originally, the men set themselves up in a converted storage facility out by the airport, both as an office and roasting space. Obviously that meant they couldn’t reach any kind of sizeable audience. From the beginning, the founders knew they wanted to be working directly with coffee bean farmers. Visiting each farm they buy from once per year has been a priority since day one, regardless of the significant expense. 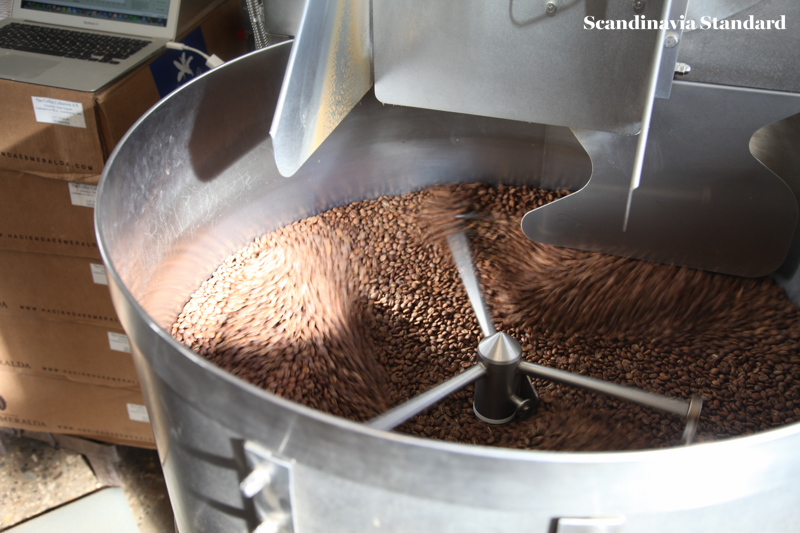 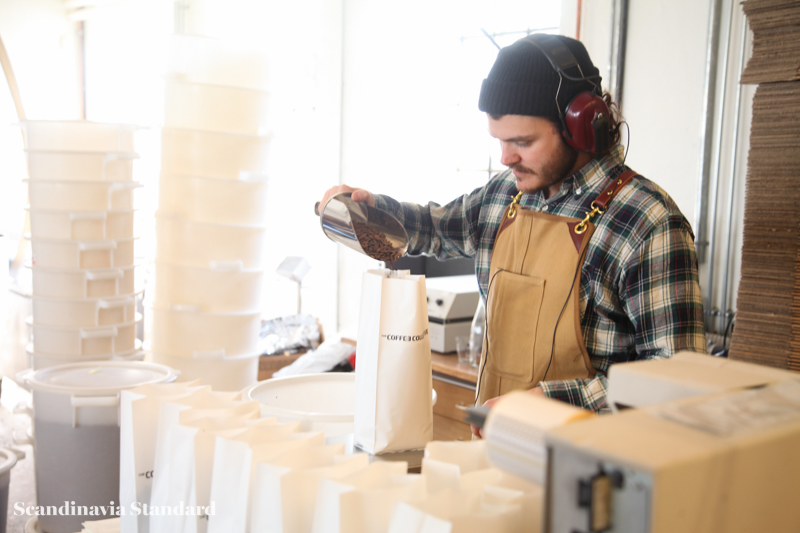 “For the first half year, we didn’t pay ourselves any salary,” Klaus tells me, “and through our second year, we paid ourselves a student’s salary. It wasn’t ideal but we were fine with it because it meant that we were doing what we wanted.”

In February 2008, The Coffee Collective moved to their first cafe location and office space on Jægersborggade. The cafe, a Nørrebro neighborhood favorite, still stands, but in 2012 the team had grown from seven people to twenty and, though they had in the meantime opened another cafe at Torvehallerne, needed more space. They found a large place on Godthåbsvej that used to be a cardboard sign factory (that’s a real thing). Before that, it was a machine factory, making and repairing various machines.

Apparently! – and I say apparently because I did not research this at all and only have the word of one of The Coffee Collective baristas – the man who owned the machine factory was shot by the occupying Nazis during WWII when he refused to relinquish control of the space. So, take this with a grain of salt (or a ground of coffee?), but at night some say they can sense the man’s restless ghost.

Sorry, that got intense. Back to coffee. 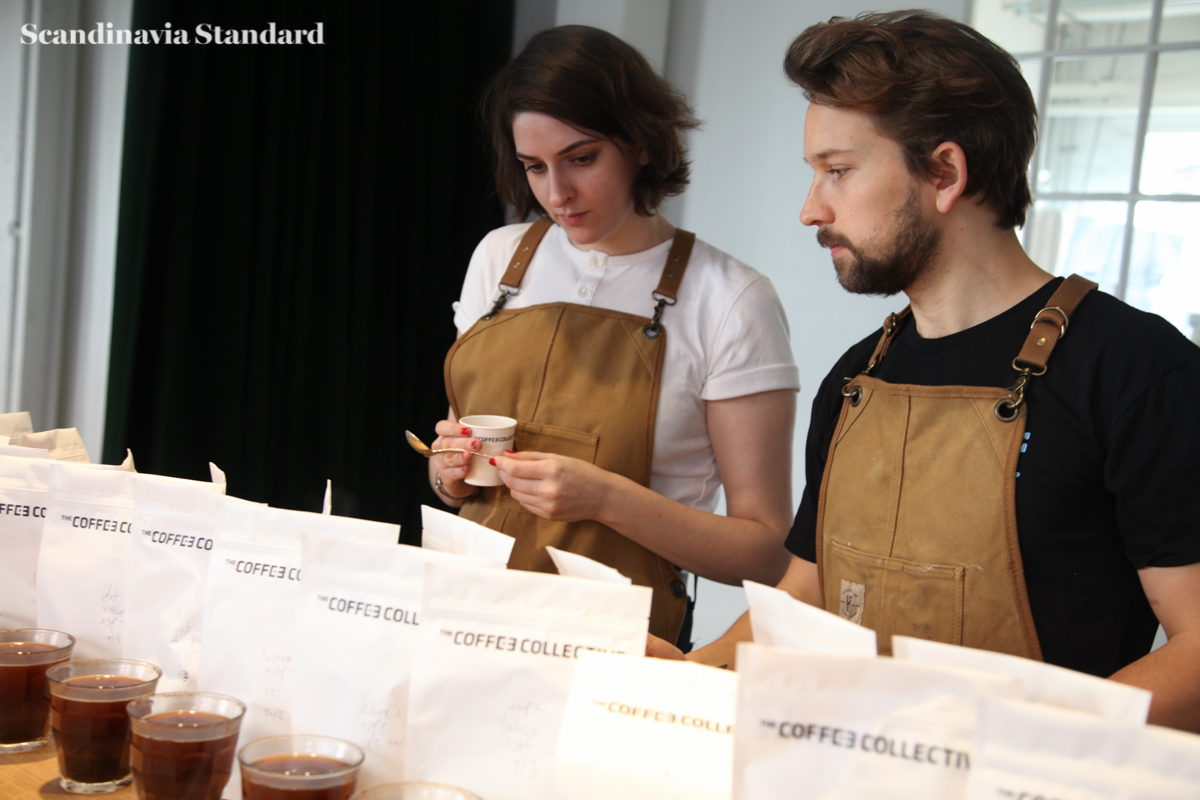 So Coffee Collective took up their former factory, adding a cafe at the front, an office, a full roastery and packaging assembly line in the back. Business continued growing. Of Torvehallerne, the glass markets in the center of Copenhagen, Klaus says: “That was an experiment. Markets had gone bankrupt in Copenhagen before so it was a risk, but that’s our busiest cafe by far.”

Though it may seem like a big operation, they’re actually one of the smallest roasteries in Denmark. “Commercial roasters do in a day what we produce in a year,” Klaus says with a laugh.

In terms of their production, 50% of what they roast goes directly to one of their three cafes – Godthåbsvej, Torvehallerne and Jægersborggade. The rest is sold wholesale around the world.

After we get a good look at the packaging assembly line (still done by hand), we move on to the roasting. It’s a big, whirring machine that takes coffee beans from a green, grassy-smelling agricultral product to the fragrant, toasted beans that we know as coffee. Klaus points out the incredibly specific heating patterns that different kinds of beans require. I am immediately suspicious that this is math and so give the graphs some sideeye before moving to the very back of the office, where the beans are stored.

Bags are stocked on top of bags and it becomes apparent just how much product is needed to sustain even small-scale roasteries like The Coffee Collective. The hard work that goes into farming these beans is paramount to the process, yet the trading practices don’t yet seem to recognize coffee farms as the businesses (large or small) that they are. 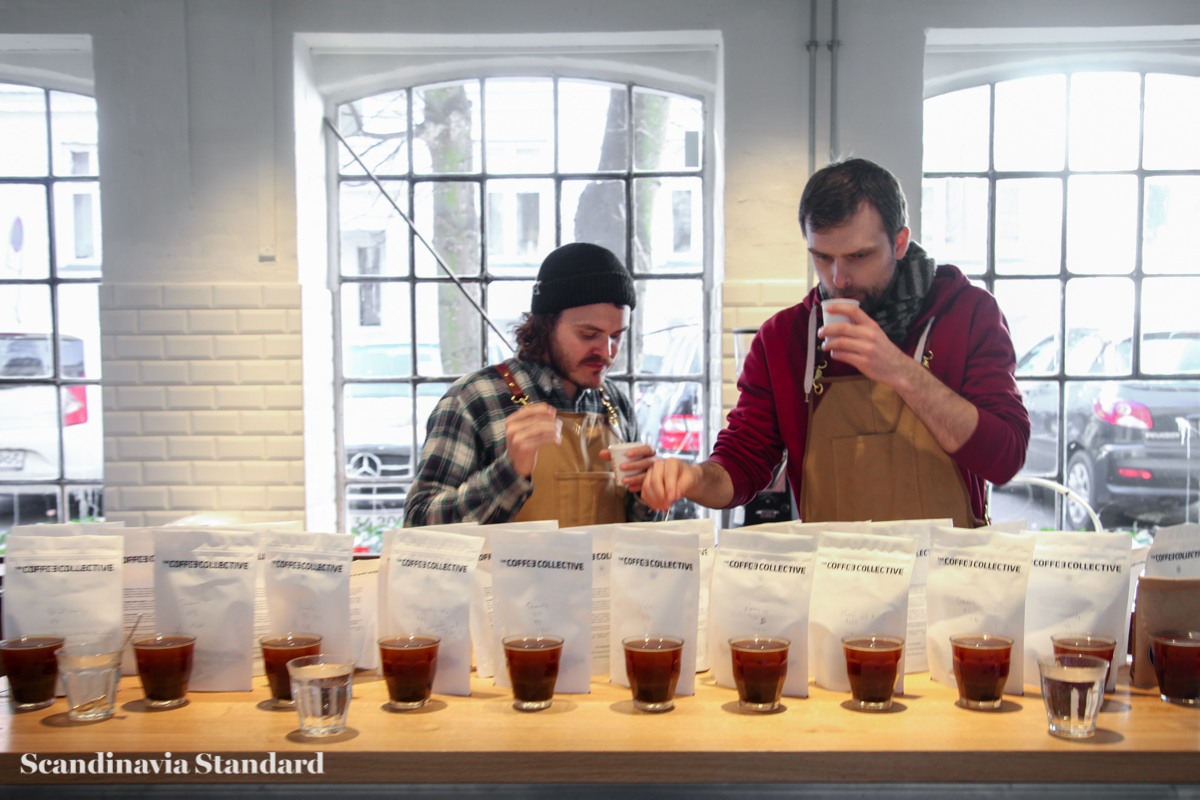 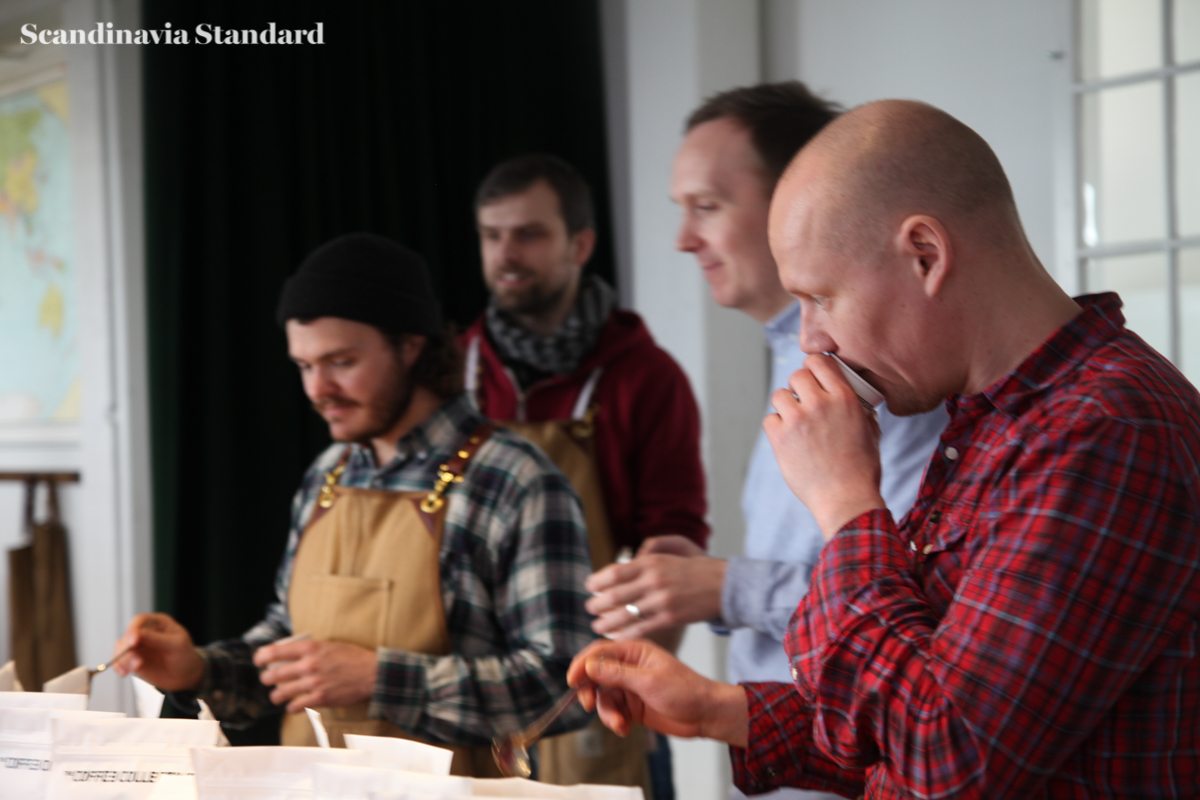 “Coffee farming is a business that is still very much affected by colonial mindsets,” Klaus explains, “So our goal has always been to make sure that we’re creating the best possibly trading scenario for the farmers. We work with them directly. The best feeling, for me, is bringing a coffee farmer a packaged bag of his beans. Seeing that process come full circle is really exciting for everyone.”

In addition, The Coffee Collective are challenging the industry to be more transparent by printing what they paid for the coffee right on the bag. “Maybe it’s not world-changing,” says Klaus, “but it’s a small thing that we do and we hope it makes people think about the entire life of a coffee bean, from farmer to cup.”

We end our day at front of the house, where a barista is setting up the cupping station. Hot water is poured over the coarsely ground beans, then left to set for four minutes. The barista then stirs the liquid THREE TIMES (no more, no less! Don’t you dare stir it less!) and finally removes the thin layer of foam from the top, which looks creamy and delicious but apparently tastes terrible.

And then the slurping begins. We dip our spoons into the coffee, bring it to our lips and then vacuum it up like soup. If you don’t sound like you’re sneezing or starting a motorcycle engine, you’re not doing it right. 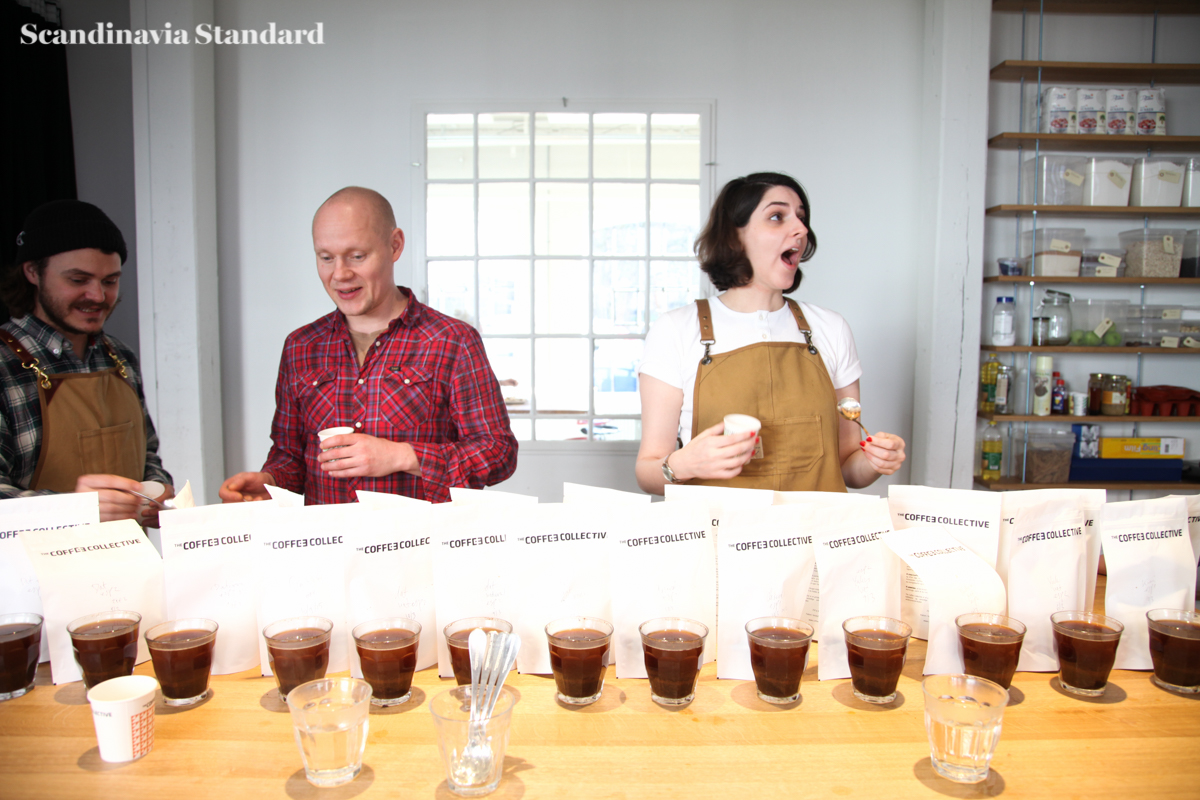 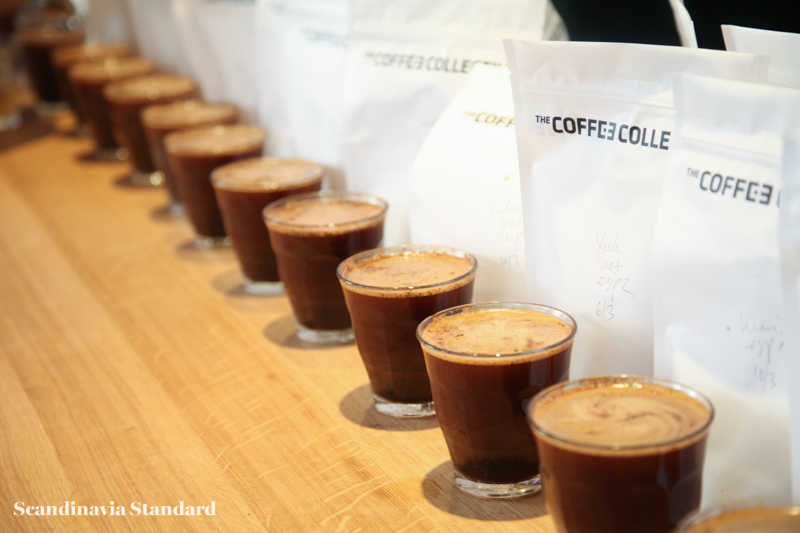 Being the variety of coffee drinker who will happily imbibe day-old, cold coffee, I am shocked to taste how different and flavorful each of the coffee and espressos are. I am floored by one coffee in particular, Hacienda La Esmeralda Special of the Geisha variety, that is so subtle that it actually tastes like tea. I’m told that it’s incredibly expensive (of course it is) and is especially popular in parts of Asia.

On the downside of this whole exercise, my pristine white shirt is immediately covered in coffee drops. One of our fellow tasters looks at me and comments, “You really shouldn’t have worn white.”

Well, no one told me there would be slurping. 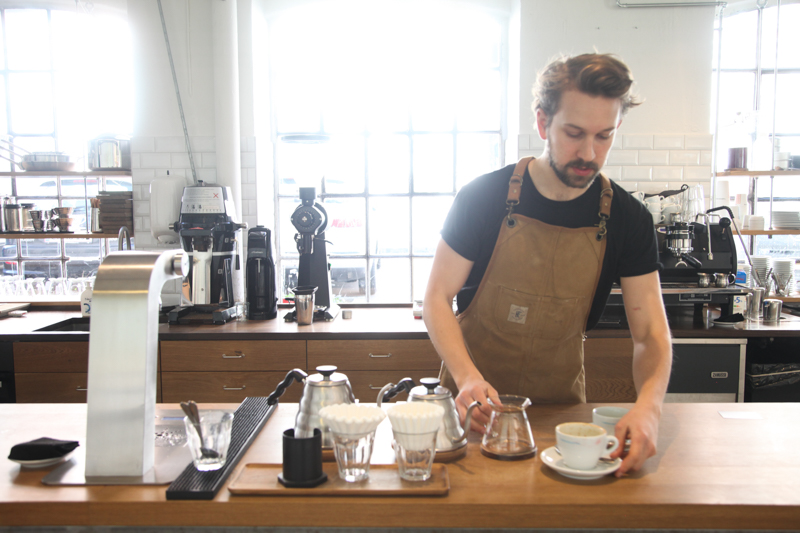 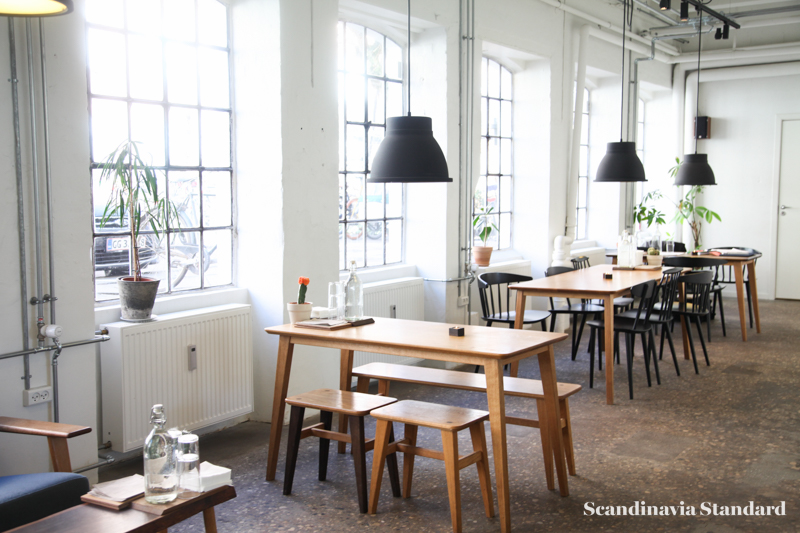 Have you visited any of the Coffee Collective locations? Tell us about it in the comments!