Three days after opening a can of surströmming, fermented herring will still hang in the air. It stays on the hair and skin, and between the strands of your fluffy coat. The olfactory memory will just…keep…bringing it back.

I agreed to partake in the surströmming challenge because: one, I’m a Sagittarius (the astrology lovers will understand) and two, I thought that the YouTube videos were nothing more than exaggerated click bait.

The first wave of odors that wafted from the surströmming can largely confirmed my suspicions – it was rotten and arresting but far from vomit-inducing. Then the second wave came, and the third, and the fourth, and all unholy hell broke loose.

How is this something humans could eat?! You’re about to find out.

Here’s everything you need to know about surströmming: the Swedish smelly fish and one of the world’s stinkiest food:

Surströmming is an infamous Swedish delicacy made of fermented Baltic sea herring. In spring, the spawning fish are caught between Sweden and Finland, then the heads are removed and the bodies are stored in a series of salted water solutions.

After roughly two months, the partially preserved herrings are transferred to airtight tins where they continue to ferment for up to another year.

Each year’s batch of soured (surs-) Baltic herring (strömming) could not be sold before the third Thursday in August by royal decree.

The mid-20th century ordinance was meant to tackle fermentation corner-cutting. While this rule is no longer on the books, the date is still celebrated as the delicacy’s premiere day (surströmmingspremiären), particularly in Sweden’s High Coast region, the birthplace of surströmming.

There are a few narratives around the history of surströmming and how it came to be, but the most interesting has to do with Finland. As the story goes, a group of Swedish sailors sold a barrel of “bad” herring at a Finnish port.

The sailors didn’t have enough salt to fully preserve the fish, and probably thought they’d get one over on the Finns. To their surprise, when they returned sometime later the locals asked for more of the semi-rotted herring.

The sailors then tried the fish for themselves, beginning what would become a source of national culinary pride. What’s more likely is that the salt shortages from King Gustav Vasa’s Rebellion prompted Swedes to get creative with food preservation but the Finnish story is more fun. Both accounts date surströmming’s origins sometime in the mid-1500s.

Another theory comes from the evidence of humans fermenting fish some nine-thousand, two hundred years ago — 80 centuries before the age of the Vikings — as discovered by researcher Adam Boethius of Lund University and his team of 16 archaeologists.

At a site in southern Sweden, they unearthed close to 200,000 fish bones, contained in bundles with pine bark and seal fat and covered in wild boar skin. The fish weren’t salted, as the discovery predates salt, but they were placed in the ground to ferment.

The amount of fish and the method employed could’ve easily supported a reasonably large population.

The sophistication and scale of the endeavor has caused archaeologists to rethink the idea that people in Scandinavia at the time were nomadic hunters and gatherers.

From the third Thursday of August through to September, many Swedes take part in surströmmingsskiva (surströmming party or fermented herring parties) — a festival period that harkens back to the old ways of Scandinavians.

During this time, they revel in eating the modern-day equivalent of that ancient fermented fish, surströmming. This tradition is relatively new, as surströmming was originally a “poor man’s food.”

Supposedly, in 1981, a German landlord evicted a tenant without notice after the tenant spread surströmming brine in the apartment building’s stairwell.

When taken to court, the court ruled in favor of the termination after the landlord’s lawyers opened a can inside the courtroom.

The court stated that it “had convinced itself that the disgusting smell of the fish brine far exceeded the degree that fellow-tenants in the building could be expected to tolerate.” What a stinker.

What is the surströmming challenge?

The surströmming challenge is an invitation to try the fermented herring for the first time. How you choose to do so is completely up to you! But we recommend that you do it outdoors.

Some people just open the can, while others go so far as to actually eat it.

We experienced the world’s smelliest fish for ourselves in the Surströmming Challenge:

Surströmming’s defining quality, and source of international notoriety, is its distinctive smell. A 2002 Japanese study found that the smell of surströmming is one of the most putrid in the world.

It was ranked “stronger” than Korean Hongeo-hoe (fermented skate fish), Japanese nattō (soybeans fermented with intestinal bacteria) and the most pungent of canned cheeses (Durian wasn’t even on the chart.)

Like a mythical shapeshifter, surströmming takes the form of whatever you think smells the worst. For me that was dirty diapers, dead bodies, and a New York City public toilet.

Surströmming enthusiasts are drawn to its rich umami flavor and will insist that the taste is far better than the odor. For a first-timer like me, surströmming tasted exactly how it smelled. My first (and only) bite started off fine enough with a strong and savory character, then quickly transitioned into the acidic finish of rotten fish.

The flavor corrupted everything it touched, from the potatoes and the crème fraiche to the chaser of aquavit.

Just thinking of it now puts my stomach into a brief tailspin. I will say that I can understand how herring lovers could enjoy the fish’s complexity of flavors. Personally, I’m just happy that I could keep my single bite down.

How to eat surströmming

In Sweden, eating surströmming is a social activity. At a surströmmingsskiva, or surströmming party, you and guests can assemble sandwiches together.

Surströmming is often eaten with a kind of bread known as tunnbröd (“thin bread”), either soft or crispy. With the soft bread, it’s possible to make a roll, and with the hard bread it can be eaten as a sandwich, or an open sandwich.

It is customary to use a variety of condiments such as onion, sour cream and chives, and it’s usually served with snaps and beers. Alternatively, you can make it without the bread and serve with just the potatoes.

With all the toppings, bread and alcohol, and you should be able to make it through. If you harbour reservations as your nose is assaulted by waves of putrid gas, there’s nothing like the liquid courage in a shot of akvavit.

How to open a can surströmming

Now, before we get into how to prepare a traditional surströmming meal, let’s talk about opening the tin. This is important since the gases released during fermentation pressurize and deform the airtight tin.

Meaning: a can of fermented fish is damn near explosive.

There are two ways to open a can of surströmming: the right way and the get-evicted-from-your-home way:

The right way to open a can of surströmming is to take the can outside (somewhere with lots of fresh air), dunk it in a bucket of water and puncture it with a can opener while fully submerged. The water will trap all the juices and (some of the) odors that have been stewing for months.

The bucket method will also stop the can from exploding in your face.

Which brings us to the wrong way to open a can of surströmming: any method but the one explained above.

I’d like to say that the worst part of the process is now over but that would be a total lie. The next step is to drain, rinse, and gut the small Baltic fish.

Oh, did we forgot to mention that traditional surströmming is whole fermented herring? Yep! That means a can full of rotten fish guts is awaiting your further attention.

After cleaning the fish you are now ready to prepare your surströmming meal.

Is suströmming safe to eat?

Yes! It’s completely safe to eat, provided that the herrings are not past their date of expiration. There should be an expiration date marked on the can.

How to prepare a traditional surstromming meal

Here is the proper way to make and eat surströmming with the help from Swedish chef Albin Blomkvist:

Recipe for Surströmming on Tunnbröd

Open the Surströmming Can

This will rinse the surströmming.

Take the herring out of the can. Make sure to set up a cutting board away from the table since the smell might still be strong.

Gut the fish by carefully cutting up the belly of the fish and removing any innards.

Then, with a sharp, slender knife remove the filets from the body.

Wash scrub your potatoes but do not remove the peel before you boil them.

In a pot, cover the potatoes with cold water then add 3-5 stems of dill to the water as well as a liberal amount of salt.

Bring the water to a hard boil and then immediately turn it down to a low simmer.

By gently cooking your potatoes you make sure they are cooked evenly and without the outside breaking. 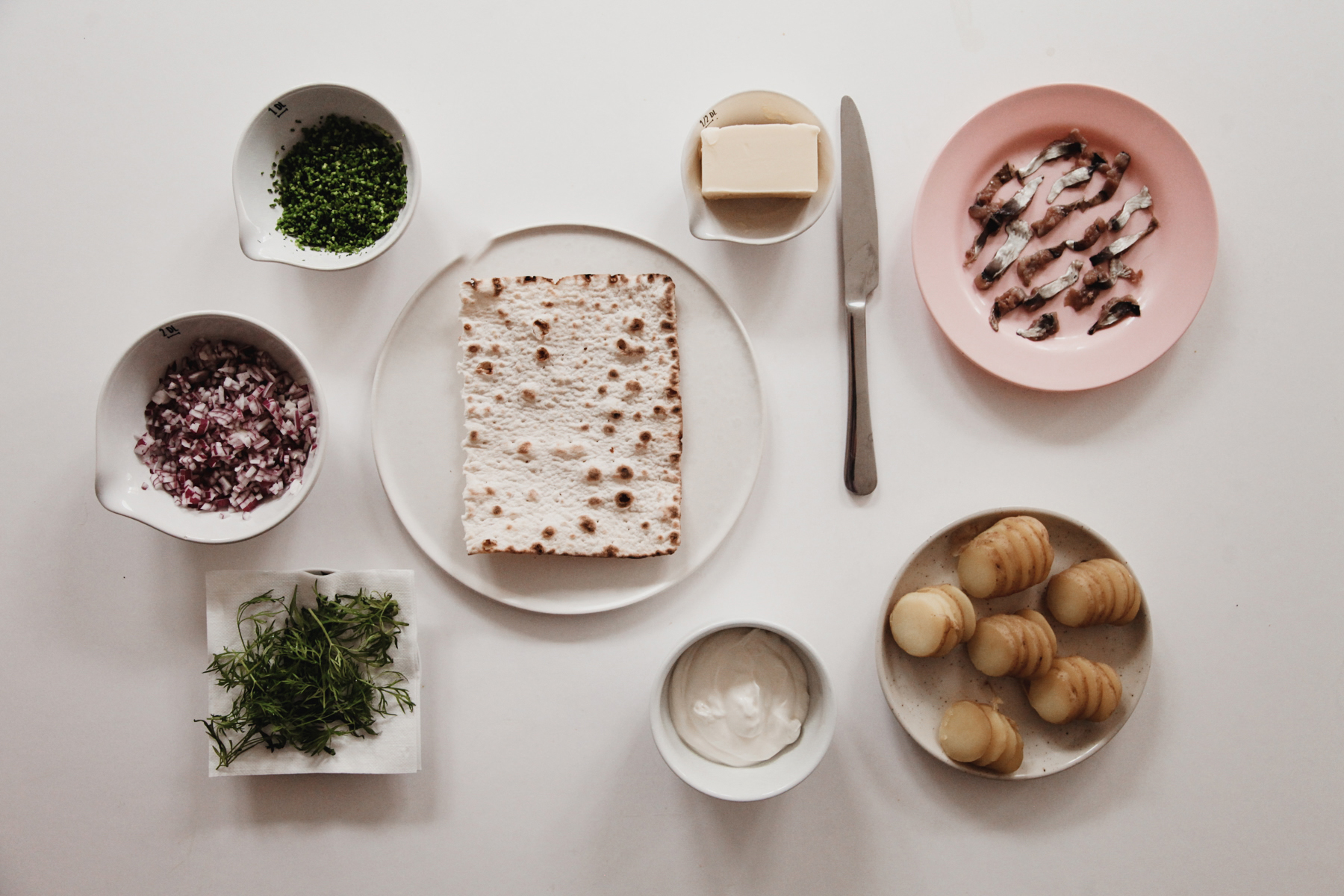 Dice your red onions and chives finely and place them in a bowl ready to serve.

Make sure that the knife is sharp to prevent your eyes stinging. By making clean cuts you prevent the onion from loosing moisture which is what hurts your eyes and eventually turns your onions sour and bitter.

As for your herbs, finely chop chives to the size of your liking and either pick or chop the dill.

For crunchy, springy dill leaves, make sure to dip the bunch in icy cold water before picking them. This prevents the leaves from drooping on the plate.

And lastly, slice the potatoes into slices.

Assemble your condiments on top of a broken off piece of tunnbröd. Make sure your bread is buttered liberally with high quality butter.

When you have your potatoes, onions, herbs and the dreaded fermented herring assembled on bread, top it all with dotted sour cream and a crack of freshly ground pepper.

At this stage, you’re ready to go!

If you want to explore different variations of this traditional Swedish dish maybe try another piece of Tunnbröd on top of your first for a double decker “Surströmmings klämma” or wrap it up in softer versions of Tunnbröd for an easier to eat snack.

The most important part of it all is to remember to enjoy it all with traditional Aquavit. 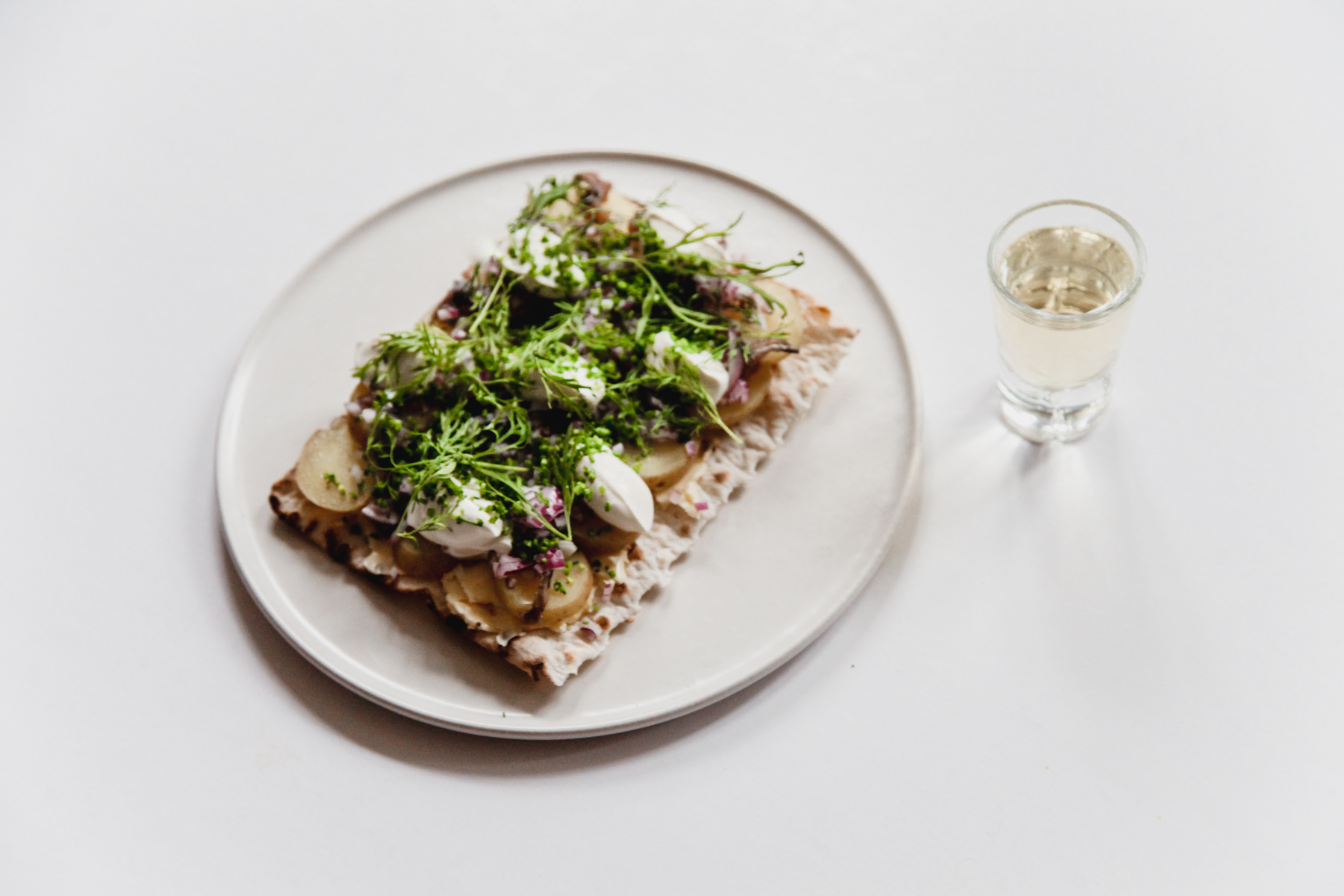 But which brands of surströmming should I buy?

There are a lot of popular brands. Oskars Surströmming is a local favourite. There’s also Prima Ultra and our surströmming of choice for the challenge was Ulvöprinsen.

Keep in mind that even surströmming has a used by date. They can overferment if they’ve been in the can for over a year, so eat them sooner rather than later!

Where to buy surströmming

The Swedish Surströmming Supplier is one of the few places where you can buy surströmming outside of Sweden.

Surströmming has been banned on most commercial airline flights so a souvenir can is kind of out of the question.

If you do get a tin, keep in mind that it should be stored in the refrigerator until opened.

If the tin begins to bulge, that’s completely normal; it just means the herrings are still fermenting in the can.