Zozo Ntokazi Mposula has been running for years. In addition to working as a teacher, dancer, and photographer, Copenhagen-based, South African-born Zozo spends time finding ways to express herself through movement; this includes weekly running and yoga practice.

Rather than doing it on her own, Zozo, who is an Ascis running ambassador, decided to set up a running challenge that was specifically for Black women. The idea is for women to share their runs, however long they may be, via a hashtag (#runmyrace) and the images and stories were subsequently shared on Zozo’s Instagram page, @_mybeautiful_people.

Zozo explains why she started the challenge: “as a Black woman, knowing that running was accessible to me as a form of self-preservation was empowering. I wanted to create an awareness for Black women and women of color that running is available to us, but we need to take the space. Each time I go for a run, I am choosing to take whatever space I find myself in!”

She continues, “Anyone can run, all you need are some good running shoes. The rest is about making sure you ‘run your own race’ meaning: you decide the pace, the distance, and how often you run.”

As the challenge is done through Instagram, it includes women across the world. We spoke with three women in Copenhagen who have joined the challenge about their history as runners and why Zozo’s challenge appealed to them:

Mary (31) is a social activist and entrepreneur. She was born in Uganda, raised in Denmark, and currently lives in Copenhagen.

I began running when I was around 22 years old, while I was doing my Bachelor’s degree in Law. I didn’t want to pay for membership fees at the gym. I saw others running and wanted to try it for myself, then I got addicted to it! I would wake up at 6 am, run for an hour, eat, go to uni!

My energy level was really high: had all day lectures and this really helped me concentrate. My grades got better and better

Running is a way for me to have excercise, and an hour off my computer and phone. I loved having an entire hour for myself.

What appealed to you about Zozo’s running challenge?

WWhen I run in Copenhagen, I don’t really see other women of color. I loved finding my running sisters in Copenhagen and talking about my love of running. Even when the group is digital, it’s about knowing that even if you don’t see them, they are there!

How did the running challenge go for you?

I was running before the challenge, so my running didn’t change. But it was about knowing that other women were running separately but together.

I remember one time I was running and I happened to see Zozo was biking at the same time, and we smiled at each other; that was really cool. It was about being part of something, especially during COVID-lockdown.

I’ve run in Uganda too. Having a running club where everybody looks like you is really powerful. Having women who look like you is important. Seeing and knowing that people like you are part of this sport really means a lot.

As a Black woman, I haven’t had any problems as a runner. On Instagram, I’ve had a lot of Black women saying “you’re the reason I lace up my shoes and go running!” Representation is so important in order to show people that they can do it too.

What I hear from most women is, “I can’t run that long!”

There are many things we don’t like in life, but we just have to do them. But with running, if something inside you tells you do it, then go for it. Make sure you have some music on. If you run for five minutes and then you’re tired, then just walk! Don’t force yourself to do anything.

I do yoga; for some of the poses, it has taken me three months to do the pose correctly. It’s not the endgame for me, it’s the development.

Yes, I run 11 kilometres at a time now, but I started with one kilometre. And then I would lie on my stairs dripping with sweat! We live in a society where we think the first time we do something, we have to be perfect, but that’s not true! Just have fun and do what you can. In running there is room for everyone.

Fatima (41) is a Community Organiser at Medborgerne. She is Danish and lives in Copenhagen.

I started running in 2012 and have been doing it on and off since then. In 2012, I trained for three months and then ran a marathon. Since that time, I’ve never said I can’t do something.

I did crossfit for a while. But because of lockdown, I had to take up running again. It was hard to motivate myself to do anything during that time, but it gave me something I had control over; I could go run and clear my mind. It made me feel I was alive.

What appealed to you about Zozo’s running challenge

Going to the gym was always helpful to me because then I can commit to a class. Zozo’s challenge made me commit to the running.

It also appealed to me because it was a Black woman organizing other Black women. I wanted to both support her and support myself, and be part of a community that is not always about surviving but also about thriving.

I don’t think that there are challenges per se. Running is free for everyone.

But representation is lacking. When you run, you are very self-aware and very self-conscious. And you definitely know you are the only Black person running. Seeing more Black people running will normalise it. I love to see Black people taking care of themselves in a healthy way.

One thing that helped me when I started running was that I had a running program. It was a beginner program of how to run without burning out. There are free programs that tell you how often and how long to run. Using that meant that I didn’t have to worry about it. There are apps now that you can use that are probably even easier.

Also, running groups are really useful, even running with just one other person. And finally, have fun!

I started running in 2012 when I joined the NIKE running club in Johannesburg. I had never run before and I was never athletic, but I started off slowly and once I got into it I really enjoyed it.

What appealed to you about Zozo’s running challenge

I had stopped running a few years ago, so when Zozo asked me to join I was excited to be part of a running group again. I haven’t been in Denmark long and I saw it as a way of meeting new amazing women who looked like me and also enjoyed running.

It was a way for me to get healthy again while having a support system of other women trying to do the same. It really does motivate you to see Black women braving the cold weather to go for a run.

How did the running challenge go for you?

I would have liked to run more than I did, but I wont stop running because the challenge is over. As Zozo likes to say ‘once a runner, always a runner.’

This challenge has taught me to be more patient with myself and kinder with myself. I was disappointed after my first run because I didn’t run like I used to 10 years ago. I needed to stop the negative dialogue I was having with myself or I wouldn’t want to run again.

I personally haven’t experienced any challenges. I run early in the morning so it’s usually just myself on the road.

I would say start slow. Start with a walk, then a brisk walk. When you feel comfortable, a slow and easy run. Don’t compare yourself to anyone else: run your own race at your own pace. The more you do it, the easier it gets.

Rest is important! You don’t have to run five days a week unless you want to, but then you’ll probably just end up injuring yourself. 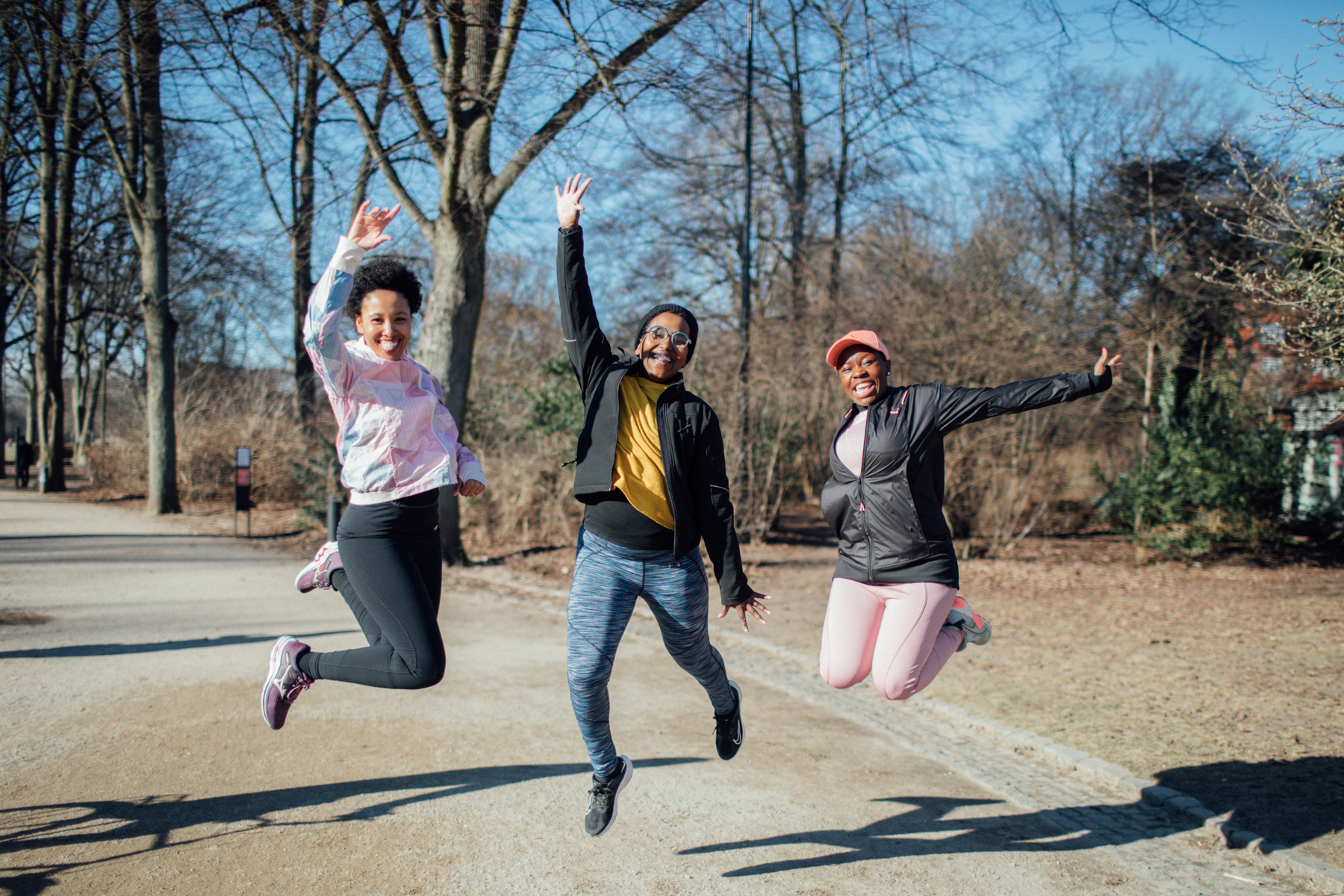 While all of these women have different relationships to running, their experience with the running challenge has been an overall positive one, so much so that Zozo has decided to make this an ongoing community event.

“Through the running challenge I have discovered a strong sense of camaraderie and sisterhood that leaves me motivated and inspired because we get to share our stories. Saturday and Sunday mornings, you will find me running with other black female runners,” explains Zozo.