While chatting with gallery owner Anneli at Les Gens Heureux, we hear a scratching overhead. I look up.

“Oh that’s just Mathias,” she says, waving her hand at the ceiling.

Is Mathias a raccoon? Is it caught in a crawl space? What’s going on?

Anneli laughs. “No, he’s an artist. Oh look, here he is.” A young man (not a raccoon) steps into the office and introduces himself to me and Freya.

Anneli explains, “Mathias’s pieces are hanging in the gallery at the moment. He’s sharing a show with Jesper Skov Madsen.” I realize, somewhat embarrassedly, that I’d just been fawning over one of his works; a paper cut out painted in a deep, almost black-blue, on a white background. It captured me right away and I hadn’t been able to take my eyes off it since.

In addition to showing his work at Les Gens Heureux, Mathias keeps a studio space in the attic. We convinced him to let us explore his hidey-hole and it was like something out of The Narnia Chronicles. But, you know, with art and less satyrs.

Up a creaking wooden drop-down staircase, into the dark attic room with exposed beams and a door opening to the roof. You know that smell wood gets when it’s so old that it can’t quite rid itself of damp? It smelled like that mixed with acrylic paint, lightly warmed by the sunshine. Threadbare Persian-style carpets covered the floor and unfinished work hung from drying lines strung from wall to wall. 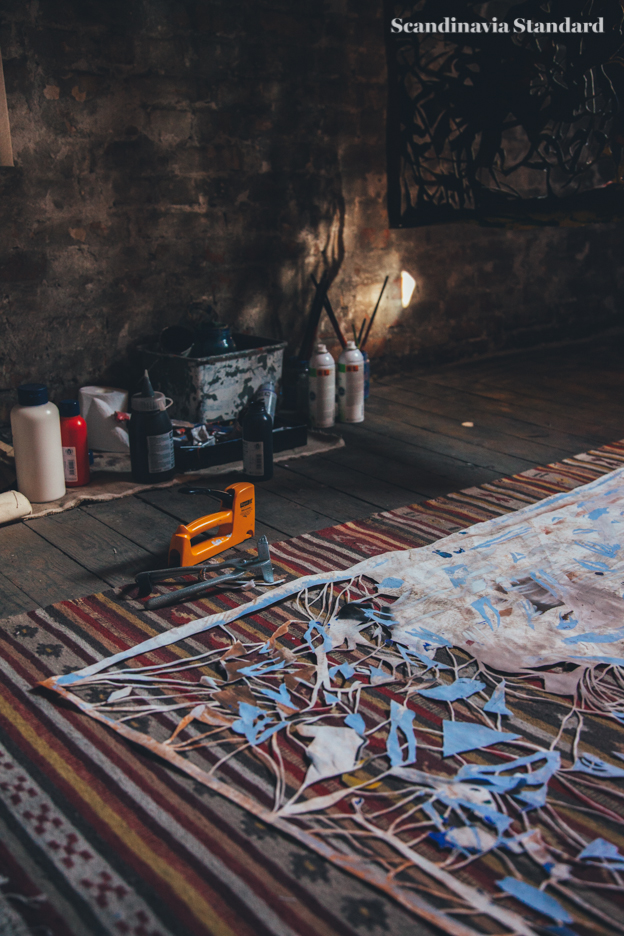 As Freya got to work snapping photos, I got a bit closer to the artwork. Mathias works both freehand and pre-planned, so the cut-outs differ in their sense of control. The piece he was working on at that moment was freehand, extremely detailed and almost floral; a departure from his usual, geometric work.

Mathias himself is quiet; he seemed happy enough to show us his work and wasn’t concerned about anything be exposed too early in the process. He was also comfortable talking about his work, gracious to accept compliments and quick to encourage dialogue. We chat about his colors, specifically the deep blue with which I’ve fallen in love.

On the far wall, hidden in shadow, was a natural linen canvas spray painted with black. The shapes were similar to his cut out work but softer, since they were sprayed instead of cut. Having grown up surrounded by South African art, a corner of the work reminded me of David Mbele – the thick lines expressive lines and shades of black on earthy background colors. 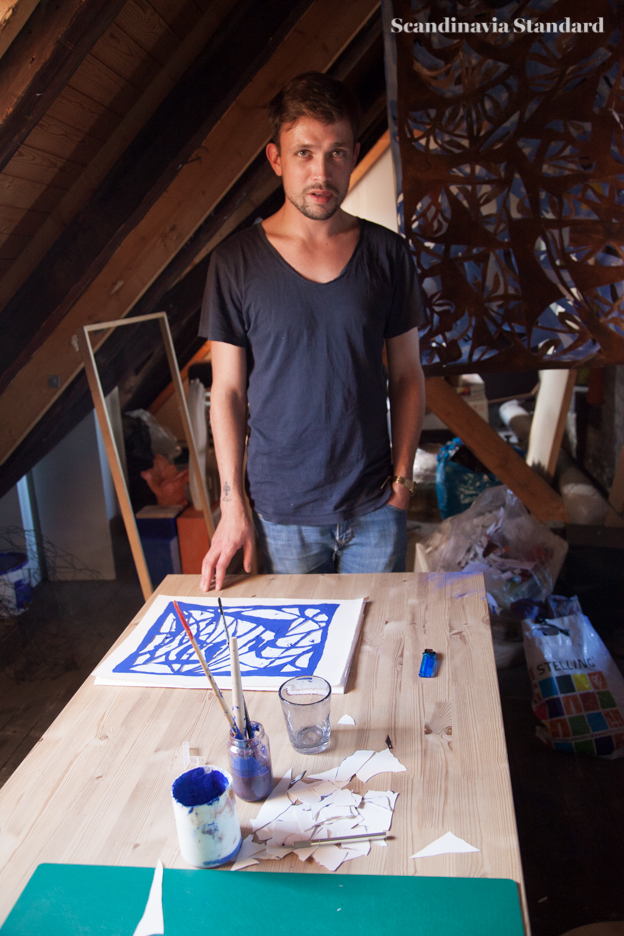 Mathias comes from an artistic legacy; his grandfather is world famous Danish artist Richard Mortensen. It’s perhaps apparent in his ease; the knowledge that creation is something in the blood. Whether or not he draws inspiration from his family tree, Mathias has developed a distinctive and meticulous personal style as well as a blue paint, reminiscent of Yves Klein blue, that is a thread throughout most of his work.

Stepping down from Mathias’s attic studio felt a bit like walking out of a fog. Maybe it was the paint fumes (art is so fun!), but more likely it was the feeling of being in the presence of a vast, gentle creativity. It’s unusual to be welcomed so quickly into the studio of such a self-assured artist, but seeing his process up-close only made me appreciate his work more.

The whole thing felt like a stroke of serendipity and plot written by Enid Blyton, but there it is. Mathias Malling Mortensen is in the attic.