I’m not a person who likes having a lot of things, but nail polish is one item that doesn’t seem to count the same way most others do. It’s more about the collection than the actual number, right? You’ve gotta have choices.

I’ve said previously that self-administered manicures are one of my methods of relaxing, plus they make me feel pulled-together and professional. So I’m always on the look-out for an affordable polish that has a good range of classic colors and is long-lasting.

Luckily for me, I found By-K. Not only are the colors great (and not always so classic, for those days I’m feeling like Punky Brewster), but the polish itself is vegan and doesn’t use a number of harsh chemicals often found in nail lacquer.

To learn more about the brand, we went to the showroom at Target PR in Copenhagen. Met by a host of polishes, including the new autumn line, my fingers suddenly looked a whole lot shabbier than they had that morning. There’s something about a herd of colorful nail polishes, isn’t there? It has the same effect on me as blandet slik.

Started in 2012 by business partners and now run by Karina (she’s the “K” in “By-K”), the polishes were launched with the intention of bringing a high quality but also cruelty-free and health-conscious option to the market.

Sold in Denmark and on the webshop, the polish itself is produced in the United States out of necessity. “That was the only place we could get the kind of formula we needed,” Public Relations Manager Conni tells us. “And for Karina there is no compromise with these things; the health and vegan aspects are integral to the business.”

While I play around with the bottles, Conni continues:

“Do you know that the fumes from regular nail polish are in the air for eight days after you put it on? Even after you stop smelling it, the chemicals are there.”

What? As a person who considers myself pretty up-to-speed on the dangers of various chemical cosmetics, I’m embarrassed to say that I’d never even considered the fumes of nail polish. Not so for my poor husband, who can’t be in the same room as me when I paint my nails. Does By-K smell like roses to boot?

Well, not exactly. The polish still has a typical smell, but it’s not as strong and doesn’t linger in the air (or on your fingers) the same way others do. That’s because it’s missing five of the major unsafe chemicals often found in nail polish: Parabens, Camphor, Toulene, Formaldehyde and Formaldehyde resin. 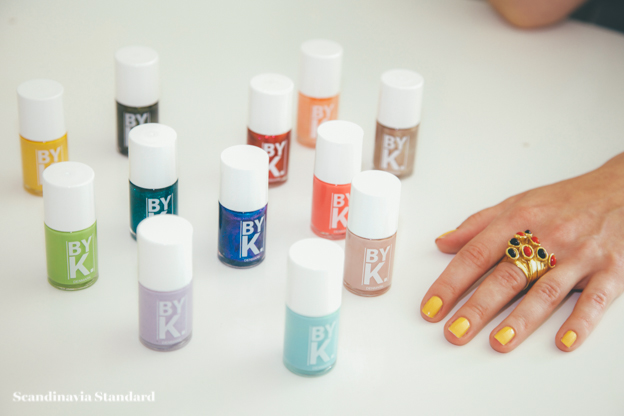 Another way that By-K has differentiated itself in the market has been their positioning. Instead of trying to sell in cosmetics shops, they’ve focused on lifestyle and fashion. Putting a nail polish next to a matching blouse or skirt is a way of showing customers how they can pair their purchases.

In order to stay true to the cruelty free ethos of the brand, By-K associates with fashion and lifestyle brands that follow the same philosophy. For example, Karina recently took part in Unfair Fashion, an organization and show that gives a platform to emerging designers who focus on socially and environmentally responsible practices.

Combining the fun of nail polish with the message of conscious consumerism is a small but important step in offering buyers a chance to purchase less expensive but oft-bought items in healthier and cruelty-free iterations.

By-K is a company in which an important part of success is to stay true to its principles and to where it began; currently, By-K is looking to expand within Denmark and Scandinavia before reaching a global audience.

Though the message may be heavy, By-K knows that nail polish, at the end of the day, is about aesthetic and enjoyment. That’s why their new fall collection comes in off-beat shades like Dandelion, a slightly mustard yellow, and Mermaid Cave, a shimmery dark green. My personal favorite is the Pretty Nude, a perfectly opaque dusty rose that I’ve seriously been searching for since I started using nail polish (like, 2 years ago. I was late to the game).

It’s a beauty product you can feel good about using; what’s not to like? Find By-K nail polish and shop online here. 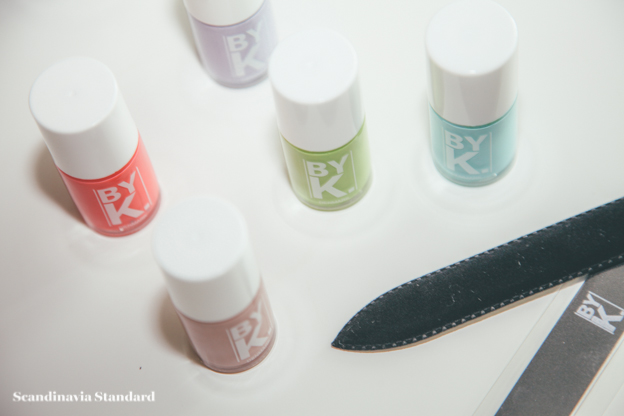