When is the last time you were in a dormitory? It’s easy to associate student living with small, unsightly spaces; there’s no end to the horror stories on the internet, waxing lyrical on cramped kitchens, ugly brickwork, and bland design. Aesthetes can find comfort in Copenhagen, where architects break with tradition and present iconic structures that go beyond beauty and are thoughtfully designed to generate new modes of student living.

Here are the six best dormitories enjoyed by the luckiest of Copenhagen’s students:

While the success of Copenhagen’s universities has been great for the city, it has also led to a student housing crisis. Enter, CPH VILLAGE – a company with a stylish solution.

The company collaborated with Arcgency architects and several freelance designers to develop the concept of a student village made from disused shipping containers. The result: in the summer of 2018, 164 students moved into a temporary village in trendy neighbourhood of Refshaløen. 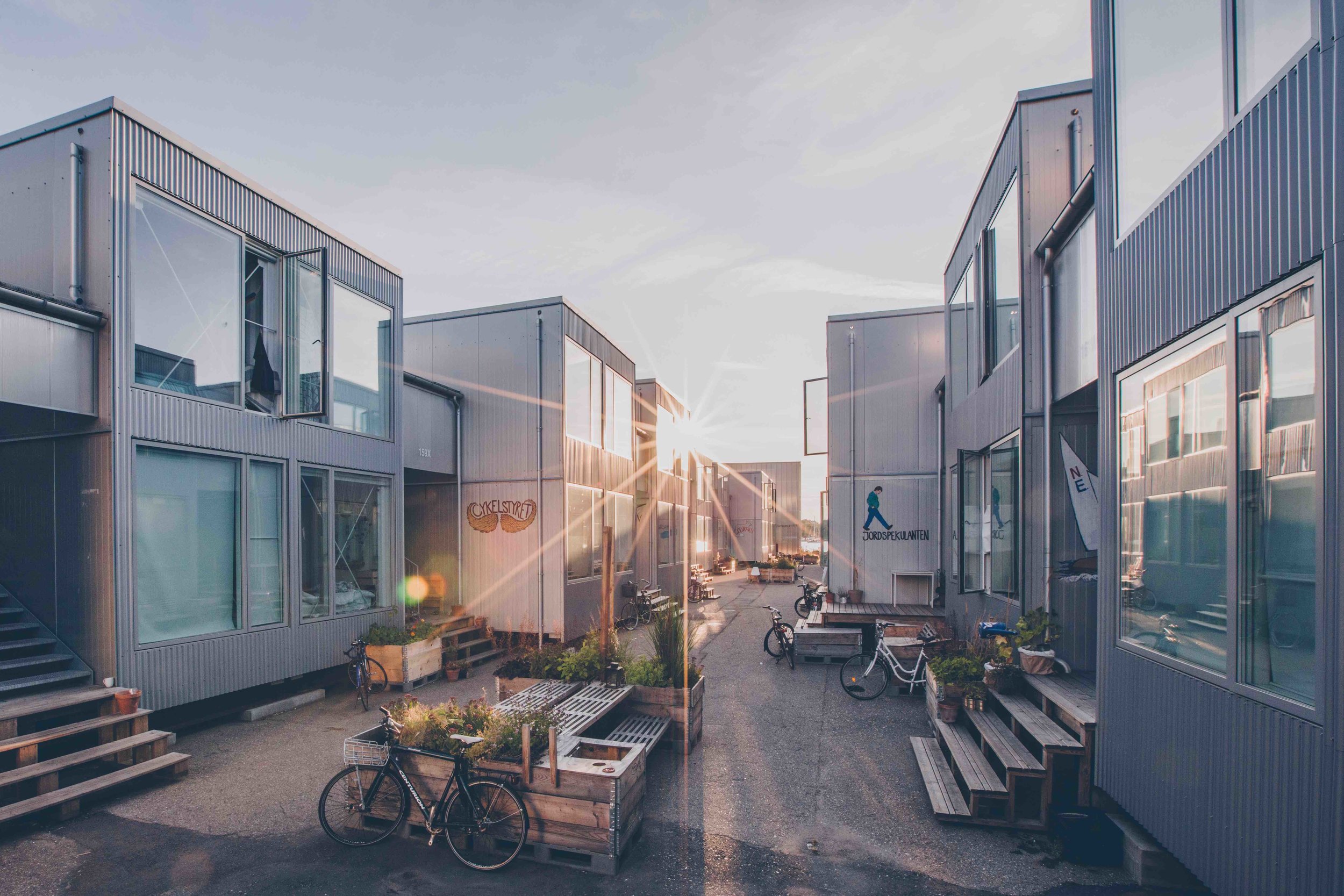 Outfitted with simple wooden surfaces, the metal containers are minimalist, leaving the design mostly in the hands of the residents. As it turns out, a small steel box can make a surprisingly cosy home, but since the boxes are only 11m2, residents get creative and practice compact living. One resident said “I have what I need, no more no less”.

At CPH VILLAGE, the focus is not on material belongings but on social connection, and the community is based on the principles of co-living. Its designers were inspired by informal settlements like the favelas of Brazil and the neighbourhood is deliberately unplanned. The dimensions of individual space are small, and residents find themselves spending evenings in the narrow streets between containers or in the common house where they eat dinner each night.

Bjarke Ingels Group (BIG) stands behind many of Copenhagen’s architectural icons, including Superkilen urban park and Copenhill powerplant. Those who follow architecture might have heard of Ingels, but what might be news is the firm’s recent foray into student housing. The firm has addressed student accommodation with their characteristic boldness, developing an even more ambitious use for disused shipping containers.

An aquamarine island is docked in Refshaløen harbour, put together from nine shipping containers stacked on top of one another. Just around the corner from CPH:VILLAGE, the residences opened in 2018, and offer a change of pace to its inhabitants. In an interview for Scandinavia Standard one of the residents says “I wake up, I turn my coffee machine on, and I go swimming. By the time I’m done, the coffee is ready”. How many people get to say that?

Benefits of the Rigger’s island-nature don’t stop at the morning swims — the structure makes use of the water on which it sits. Engineers have incorporated hydro source heating to convert the surrounding seawater into a free natural heat source, reducing emissions by 81% compared to conventional heating methods.

Looking out over Frederiksberg gardens, 4. Maj Kollegiet fits easily into the beauty of its backdrop. Designed by Hans Hansen, one of the great figures of Danish functionalism, the building’s name carries historical significance – the 4th of May marking the date that Danish resistance fighters overcame the German occupation of Denmark. Opened in 1951, the building’s function was to be a home for the children of freedom fighters.

As well as being perhaps the prettiest dorm in the city, 4. Maj Kollegiet is also one of its most colourful. The dynamic palette makes reference to Denmark’s liberation, and was intended to create hope and joy in the aftermath of the war. To this day, the ancestors of Denmark’s freedom fighters get to enjoy its playful colour scheme of sunny yellow, apple green and red. 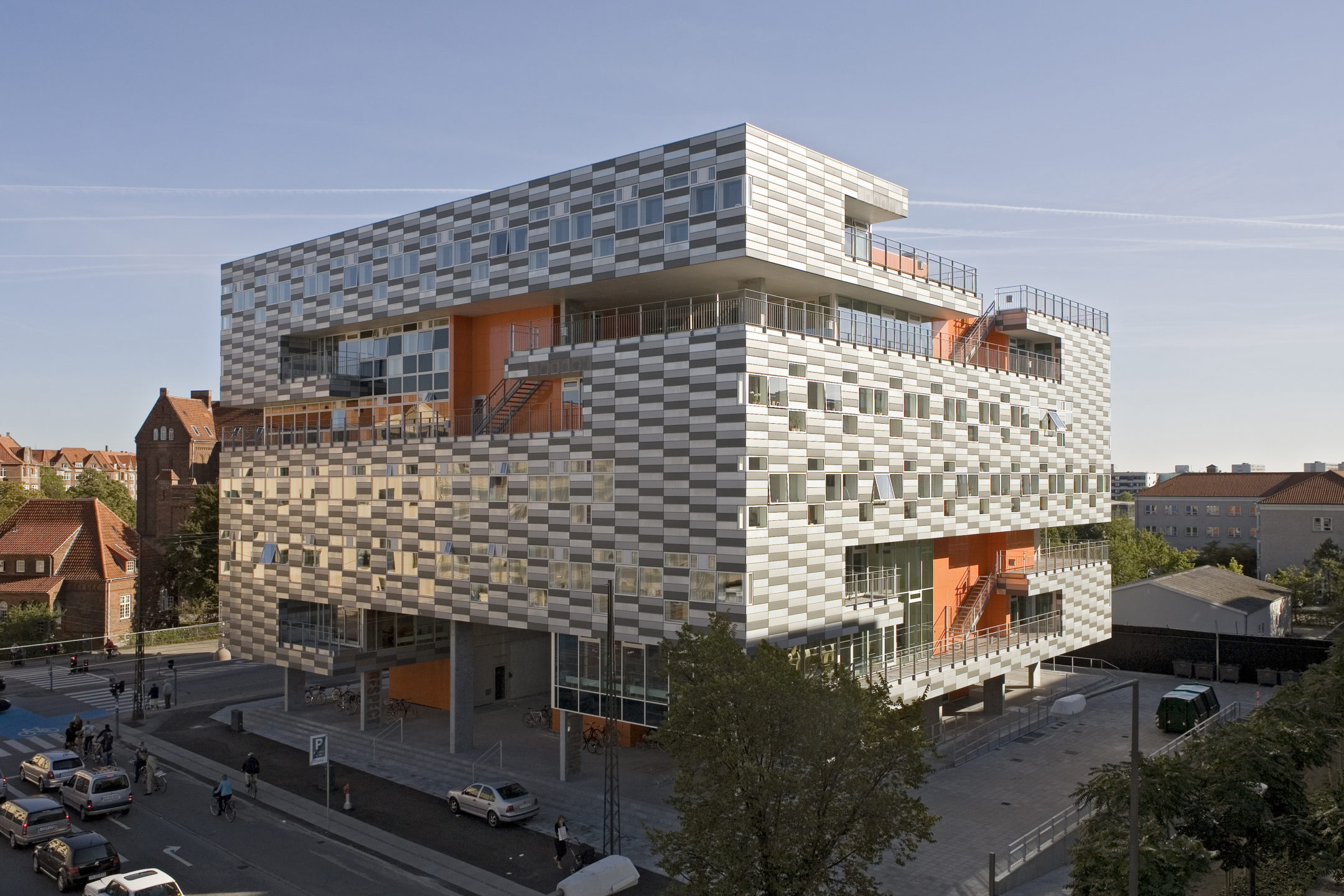 The designers worked in close collaboration with anthropology students from the University of Copenhagen, wanting to use the design to bring students together.

Just around the corner from Bikuben sits Tietgen. Designed by Lundgaard & Tranberg architects in 2006, the building’s round structure and oak facade contrasts its rigid and futuristic surroundings.

But the dorm’s circular architecture is about more than aesthetics. The circular structure both symbolises and facilitates community. The building is planned so that residents’ bedrooms look out on the surroundings giving them privacy.

Meanwhile, common areas look into the building’s round inner courtyard, allowing residents to see their neighbours in the other kitchens. If they see something exciting going on, they can go and join! 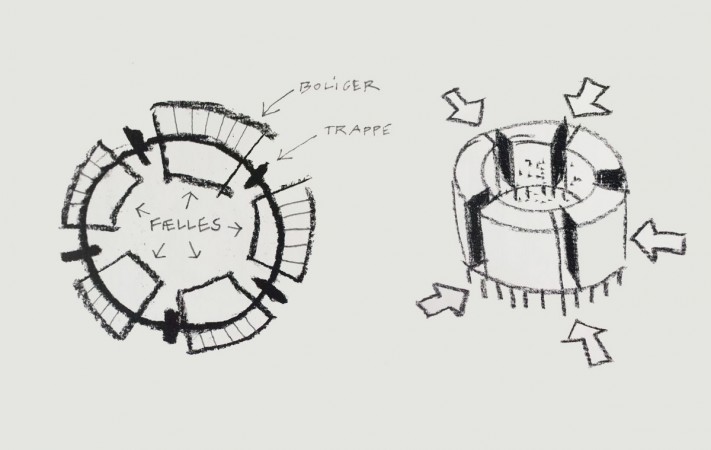 Any interested architecture lovers can visit Tietgen and have a tour by one of the residents themselves – find out more here.

Financed by IAK Industrial Employers of Copenhagen and built by Lungaard & Tranberg architects in 2004, this dormitory reflects its developer. The building’s metal façade and the choice to leave load-bearing concrete beams visible gives the building an industrial character. At the same time, the architects have integrated warmer elements to strike a balance between industrial chic and a feeling of home. Walls in red, orange and pink can be seen through its large windows framed in larch wood.

Designed by the same architects as Tietgenkollegiet, there is a similar communal philosophy at play. While the appearances of the two dormitories diverge, they have both been designed to facilitate contact between their inhabitants.

Where Tietgenkollegiet keeps the residents in visual contact with one another, at Industri residents are able to hear people in other kitchens. Thanks to the building’s design, residents can hear what is going on in other kitchens and go and join if they so choose.

The kitchens are stacked one on top of the other and are connected by steps going through trap doors, allowing the sounds of student life and the students themselves to travel easily between them.