Famed New Nordic restaurant Noma put Copenhagen’s green spaces on the map when owner and Chef Rene Redzepi announced they’re opening up an urban farm in Christianshavn in 2017. But the Danish city – which was named the European green capital of the world back in 2014 – has actually been blooming with inner city agriculture and colony gardens for some time.

Urban farming is on the rise, bolstered by Copenhagen’s overall aim to become carbon neutral by 2025. The city adopted a green roof policy some years back, ensuring all new buildings with roof slopes of less than 30 degrees must be covered with vegetation. We’re beginning to see a change in the way urban space is being used, with community gardens and urban farms springing up all over Copenhagen.

One of the first was DYRK Nørrebro in March 2011, an organic roof garden set up on top of Blågårds School. The project – started by Anders Christoffer Andersen, Katrine Skovgaard and Christian Damgaard – was inspired by the gardens of Havana, and was the first of its kind to get Municipality permission to grow on public land. The trio had no background in agriculture, just an intense desire to create a community-inspired project that would bring locals together and help demystify the growing process. 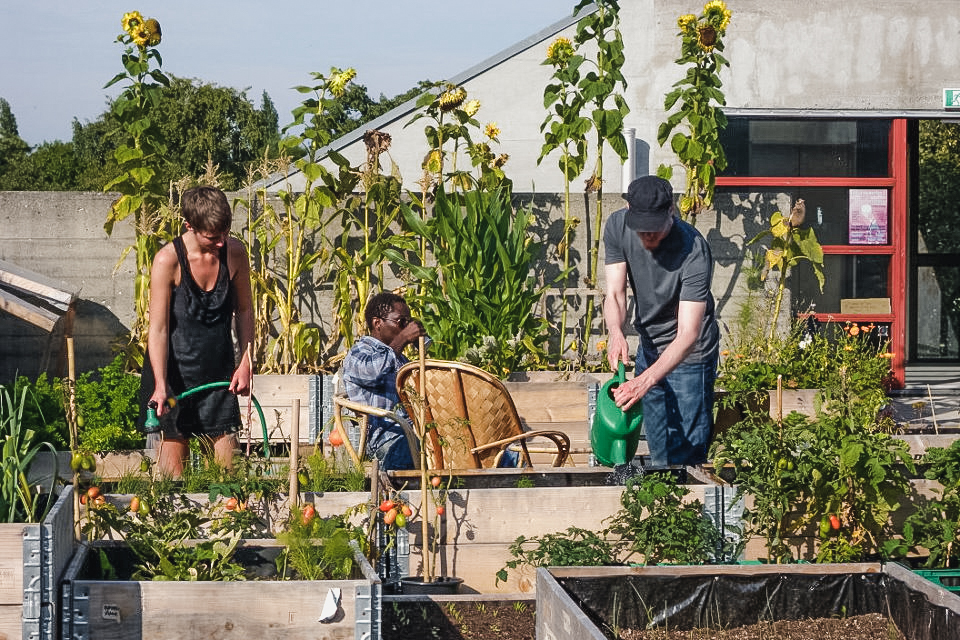 “I think agriculture speaks to a lot of people today. Everything is moving so fast and we’re getting further away from nature. It was just the right time for people to make this move and that’s why it’s blown up so much in Copenhagen. People are starving for more nature in the city,” says Marikka Møller Stenak, spokesperson for DYRK Nørrebro.

Marikka and twenty other members maintain the garden and run events for the public; interest in the project has been so steady that there’s even a waiting list. All involved maintain the garden voluntarily, rewarded simply by access to this hidden rooftop oasis.

“Once you’re up there, the city goes so quiet and you can just be in the garden. The buzz isn’t around you anymore, it’s really calming. We have a lot of members up there who’ve been stressed or anxious and long for this quietness.” Marikka explains.

Green plots like DYRK are helping city dwellers to find some peace amongst the hubbub, offering them a place to reflect upon the day. Marie Hertz of SLOW Living, an organisation that runs garden-to-table workshops for individuals and companies, agrees that people are looking for catharsis.

“We don’t have to use nature in our daily living, we can just buy our supplies in stores, so there’s no real need to experience nature. But the thing is, to connect with nature, you can’t really buy it, you have to feel it,” Marie says

Up on the roof garden at Blågårds School, a vast range of fruits and vegetables, including varieties of kale, squash, root vegetables, and many herbs, showcase the biodiversity that’s possible in an urban environment. “We can grow almost anything,” explains Marika.

A lot of these green projects recognise that self-sufficient food production – considering the small amounts of yield involved – isn’t feasible in Copenhagen. Instead, it’s more about celebrating the processes of cultivation and incorporating this into their educational aims, from germination to the dinner table.

“All the produce goes directly to the volunteers and most of it gets eaten at our communal meals. We grow as many different varieties of food as possible, so the outcome is not our main focus, instead it’s the whole procedure of learning,” says Marrika. 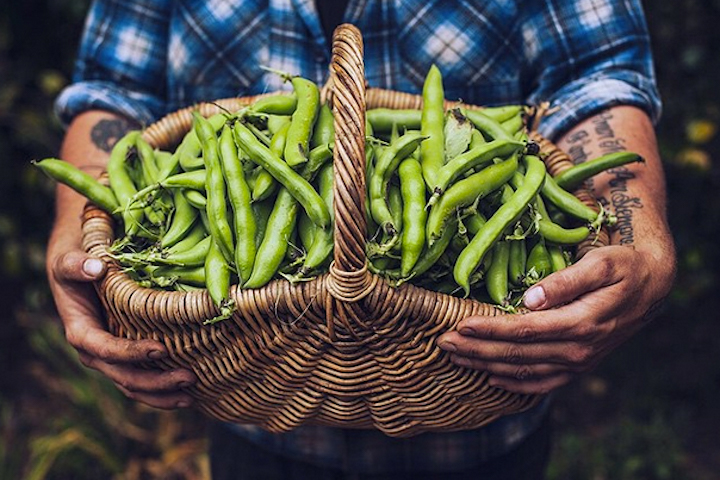 On the other side of the city in an area of Østerbro known as the Klimakvarter – a “climate-resilient” neighbourhood, meaning it consists of varied terrain, green areas and extensive irrigation – sits Copenhagen’s only rooftop farm, a 600 m2 space of land positioned five floors above an old car auction house. A Community Shared Agriculture (CSA) farm, ØsterGRO has run since April 2014 with its 40 members pitching in both financially and physically. They tend to the 100 tons of soil and raised beds, reaping the rewards of their toil with a weekly box of take-home produce.

The farm, which includes a greenhouse and four beehives, was founded by Livia Urban Swart Haaland, Sofie Brincker and Kristian Skaarup. Kristian, a landscape architect originally from Lolland, runs ØsterGRO on a full-time basis. He says the farm’s central mission is to show members and visitors where the food on their plates comes from. The ØsterGRO team has high hopes for the future of green Copenhagen, aiming for equivalent farms to operate in the city’s other neighbourhoods.

“Anything we grow, you can grow on your own balcony too! You don’t need a lot: some soil, a seed and a pot and then you have a plant…” encourages Marikka, who wants to inspire more of us to get our hands dirty. “Why not start growing tomatoes on your balcony instead of just flowers? If you have a little patch down in the courtyard, why not plant a tomato plant – plant something.” She insists.

Whether you plan to use your own space or want to check out more of what Copenhagen has to offer, urban farming isn’t just a trend; it’s a shift in the way both green and vertical space is used throughout the city.

Want to know more about urban planning in Copenhagen? Check our our brief history.