When you go to a festival and don’t ingest any mind-altering substances, you wake up strangely refreshed in the morning. This is Day 3 at Roskilde and that’s the one immutable lesson I’ve learned during my time here. Somebody create an inspirational meme for me, please.

I’ve been waiting for today’s first show for ages. I adore Kwabs and couldn’t wait to see him at Pavillion, where the space is small enough that you can vibe on both the music and the crowd. When Freya and I arrived, the area was already packed, but people assume you are important when you’re a duo walking around with large cameras, so we managed to nudge our way to the front.

From there, it was a blur of jumping, screaming and picture-snapping. I was surprised to learn that any of the photos we took were in-focus, given that we were physically unable to stop dancing.

Kwabs was even better than I expected; his voice is sensual and deep, he radiates energy and his band was killer. When he played “Walk,” everybody lost their damn minds. 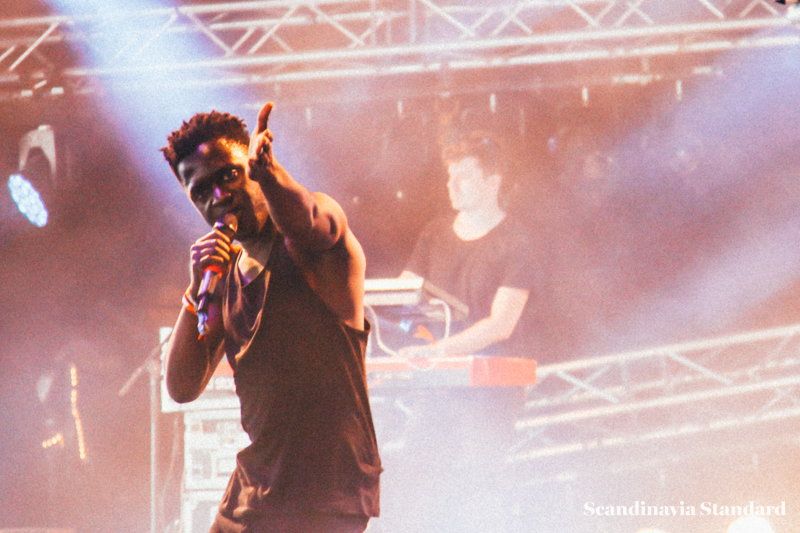 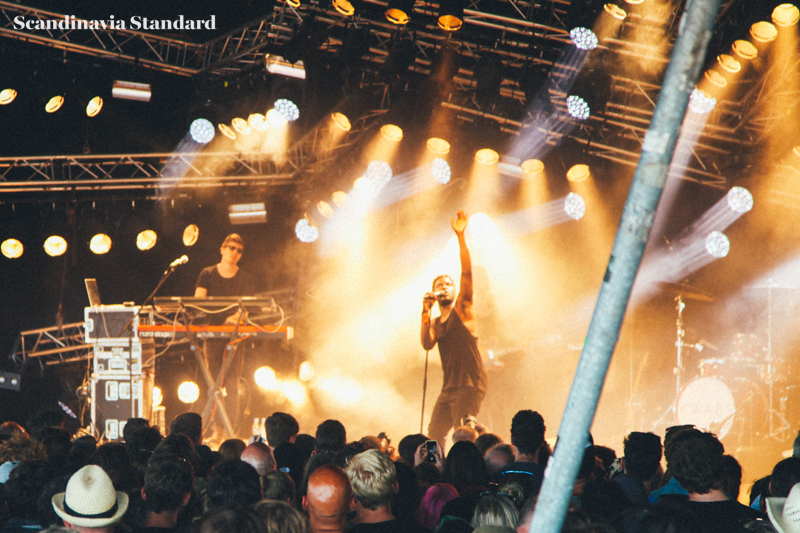 What a way to start the day! I felt great – this feeling is what festivals are about. Freya went on to The Gaslamp Killer Experience, which she describes as “hip-hop meets psychedelic jazz.” Frontman William Benjamin Bansussen, who goes by the stage name The Gaslamp Killer, conducted about a dozen other musicians as they performed solo pieces, then meshed them together. “He bounced around with his wild bear and Merlin-esque jacket,” says Freya “…somehow, it worked.” 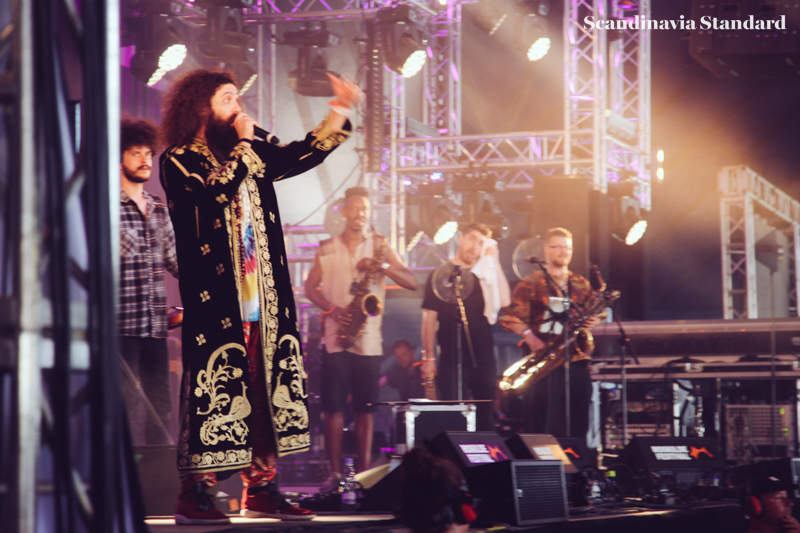 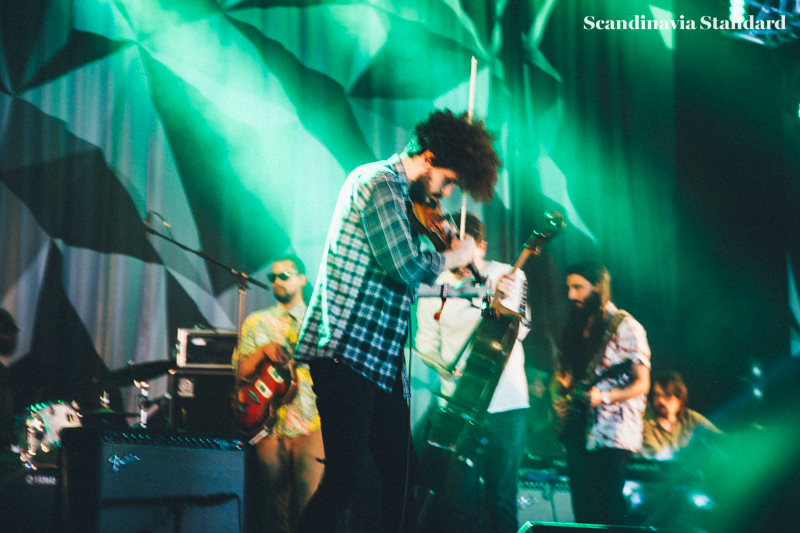 While Freya was watching wizards, I went to Marie Key. Though I don’t know much of her work, I’d previously heard a few songs and knew her by reputation; she is a highly-respected songwriter known for her wordy, heady songs. After only a few minutes watching her, I get it. She absolutely rocked Orange, which isn’t easy to do, and had the whole crowd singing with her. It was still early, so there were lots of kids running around; it was just…right. I dug it and I’m looking forward to getting my Marie Key playlist together. Album recommendations welcome! 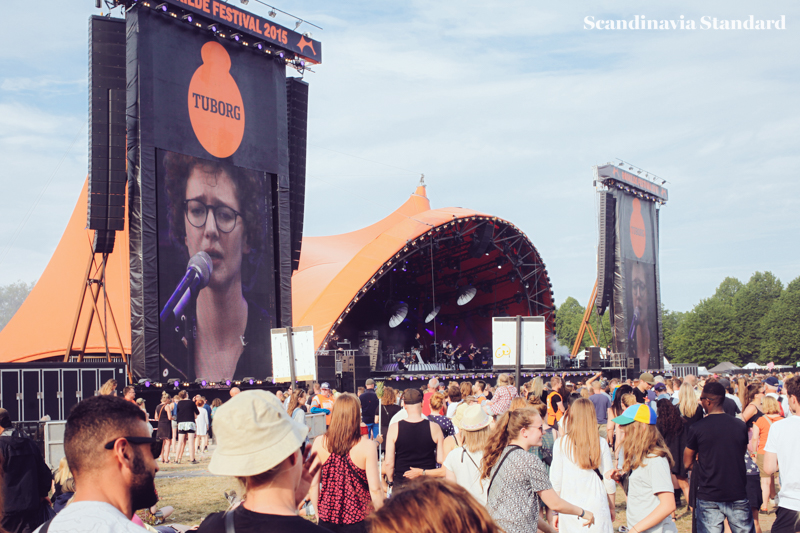 Next stop was Kendrick Lamar. Next stop, in actual fact, was standing in line near where Kendrick Lamar would eventually be playing. Except that we got kicked out of the line and ended up getting space by the second barrier – not as close as we wanted to be, but definitely in the thick of it. We sat for an hour, getting dirtier and dirtier while people ashed their cigarettes in our water cups and stepped on our bags. For those of you looking for health shortcuts, please note that cigarette ash in your drink is not analogous to activated charcoal.

With half an hour to go, we were standing, crushed against the barrier. I am unable to conceptualise just how many people were there; it seemed like the crowd went back into infinity. The only negative thing I can say about the show is that I didn’t get to watch it from the comfort of a cloud while eating a burrito. Being packed in an audience is physically uncomfortable, but that’s just what you sign up for. But aside from that, the whole performance was excellent. Lamar played hits, a few throwbacks, and took two opportunities to freestyle which were awe-inspiring.

One thing that gets me in the gut during large concerts (I cry a lot, you guys) is how overwhelmed the artists must get sometimes. I mean, in the morning you were eating your yoghurt or whatever, then a few hours later you’re on a stage and there are so many people there to see you that they need to stand in line just to get into a large open field. That’s nuts. Kendrick Lamar seemed to be having a real moment of wonder at what was going on, looking out at this big, weird, dirty festival. And then he tore shit up. He got us jumping, he got us yelling. By the end of the concert I didn’t care that I was covered in sweat and dust and beer.

The comedown, of course, is when the concert is finished and you’re still covered in sweat and dust and beer. The exodus from Orange was epic; I’ve never seen so many people wandering aimlessly at once. My plan had been to go to Run the Jewels afterwards but it just wasn’t happening. 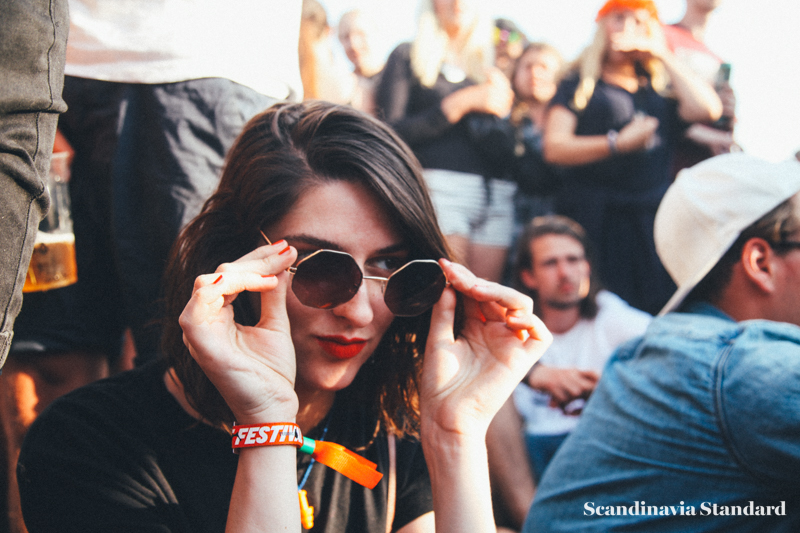 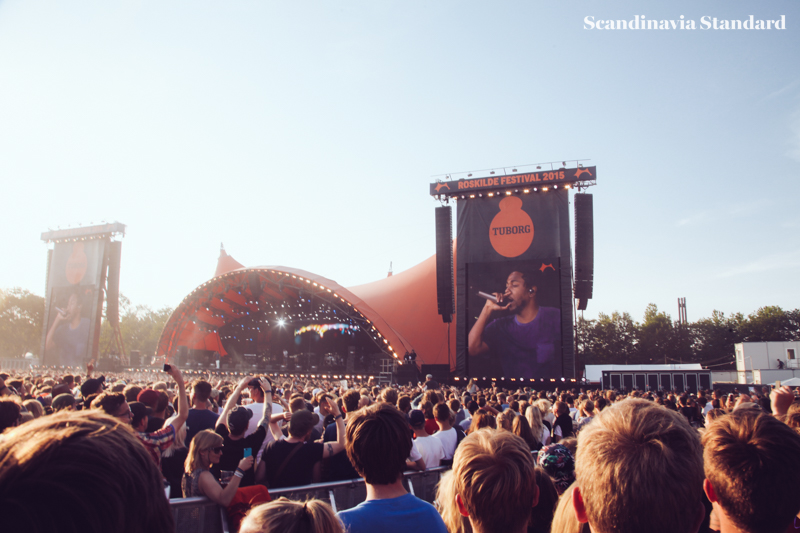 I was bummed that I didn’t get to see Le1f, who was on just 30 minutes after Kendrick Lamar started. Dear Roskilde Festival schedule-makers: putting all the good rap within an hour of each other means I have to make hard choices. Le1f, if you see this: I’m sorry I missed your show.

After a bite to eat, we made our way to Disclosure. They blew it up; it was a really fun show that kept us dancing for two hours straight. Those guys know how to work a crowd. Plus Kwabs came out for a special performance! 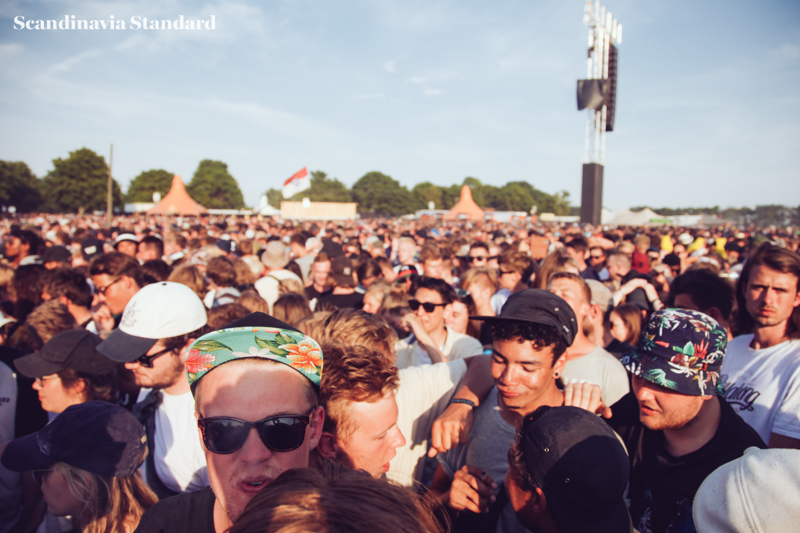 Mew was on at 1:30, so we worked for the rest of the night at Media City to get this post up. See how hard we work for you? It’s a labor of love, though.

By the time 1:30 am rolled around and we picked ourselves up to get to Orange again, I wondered what the hell I was doing. Going to see a band I only semi-like when there’s work to do? After midnight? Also, I’m old? Ugh. But! Oh my goodness, my heart is bursting to tell you how good this show was.

We got an amazing spot in the first pit that gave us a perfect view of the stage and as soon as they started playing Freya looked at me and said, “this is magical.” She was right. It was incredible. For a band I thought I didn’t have strong feelings for, I certainly seem to know the words to all of their songs. Mew knows what Roskilde wants. They went with their hits, they put on a world-class lights show and they played their brains out.

There’s something really lovely about an internationally-popular Danish band playing at Roskilde. It’s a connection between the crowd and the band; it isn’t a felt-absence when a non-Dane is playing, just a warmth that I can’t really explain. Jonas Bjerre is the world’s most adorable frontman, batting his big eyes like a baby deer and showing up in a totally earnest cardigan. When he looked out into the crowd and said, “Roskilde, det er dejligt at se dig,” my heart melted.

And then the rest of me melted. And I danced around like a big melty-puddle for the rest of the night, until the show ended and I stumbled home, humming to myself. 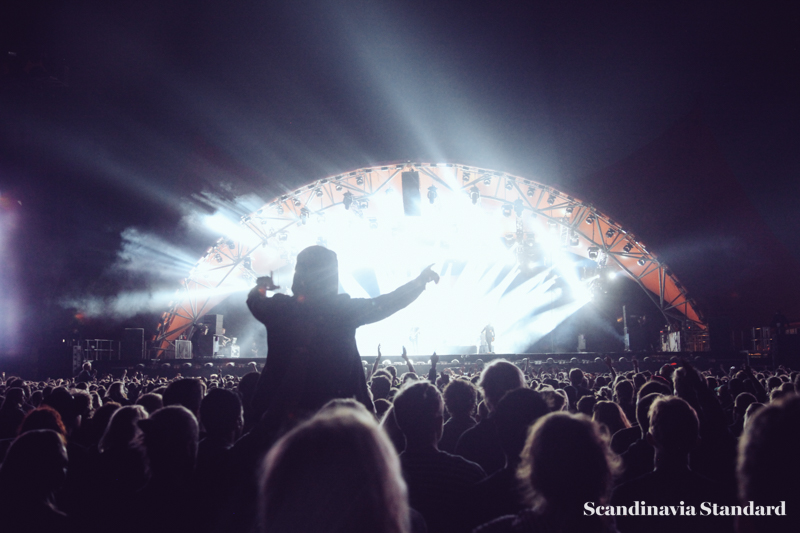 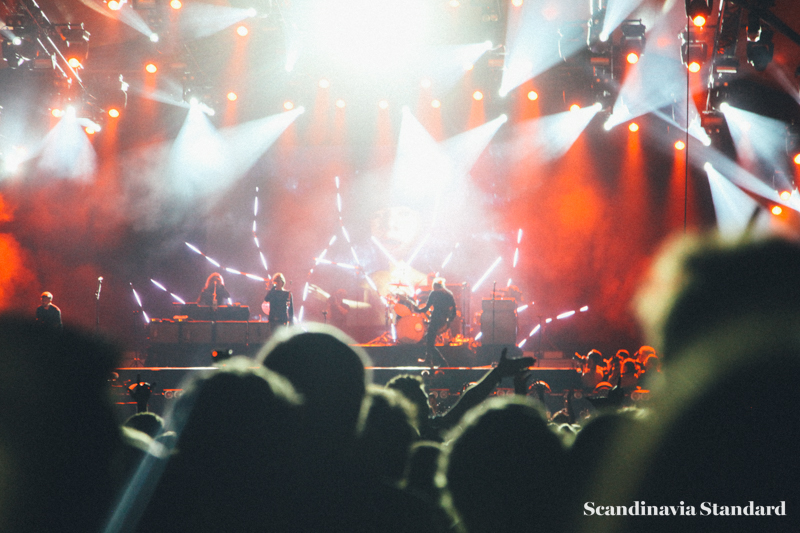 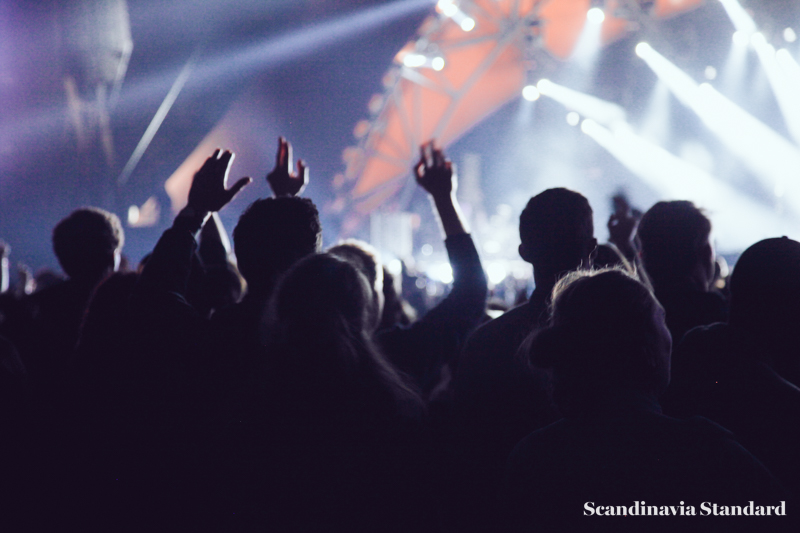 Catch up on what you missed with dispatches from Day 1 and Day 2. 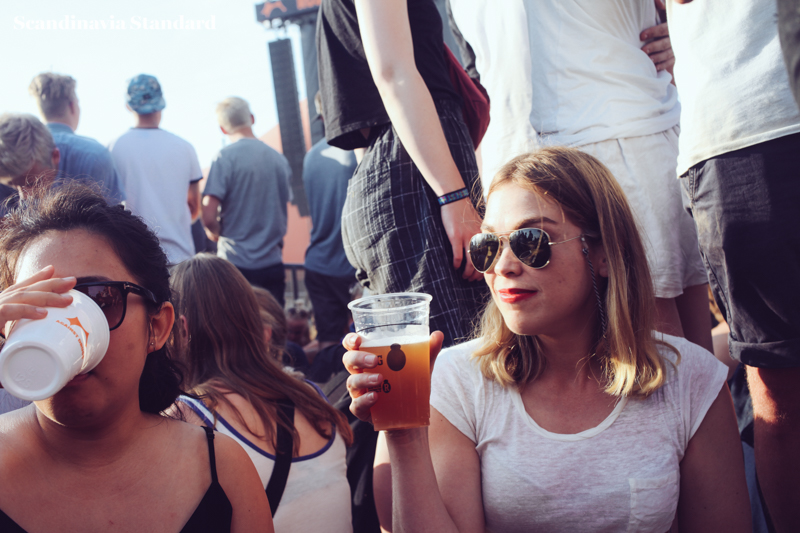 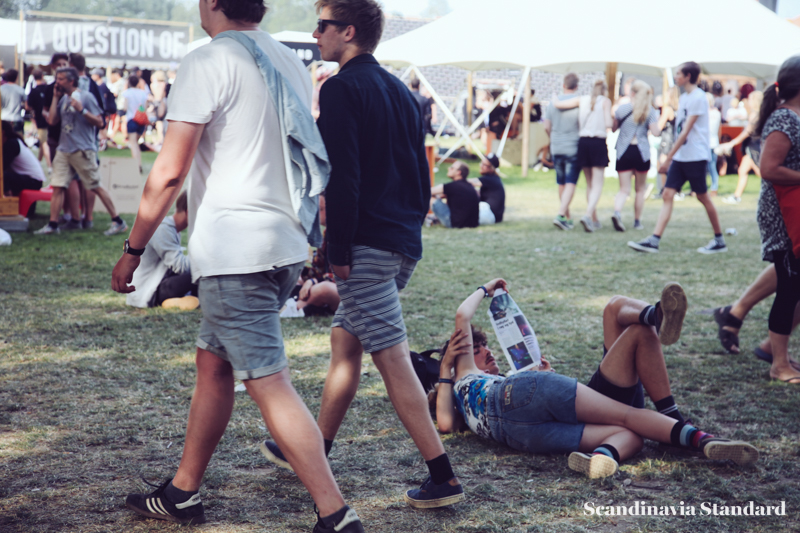 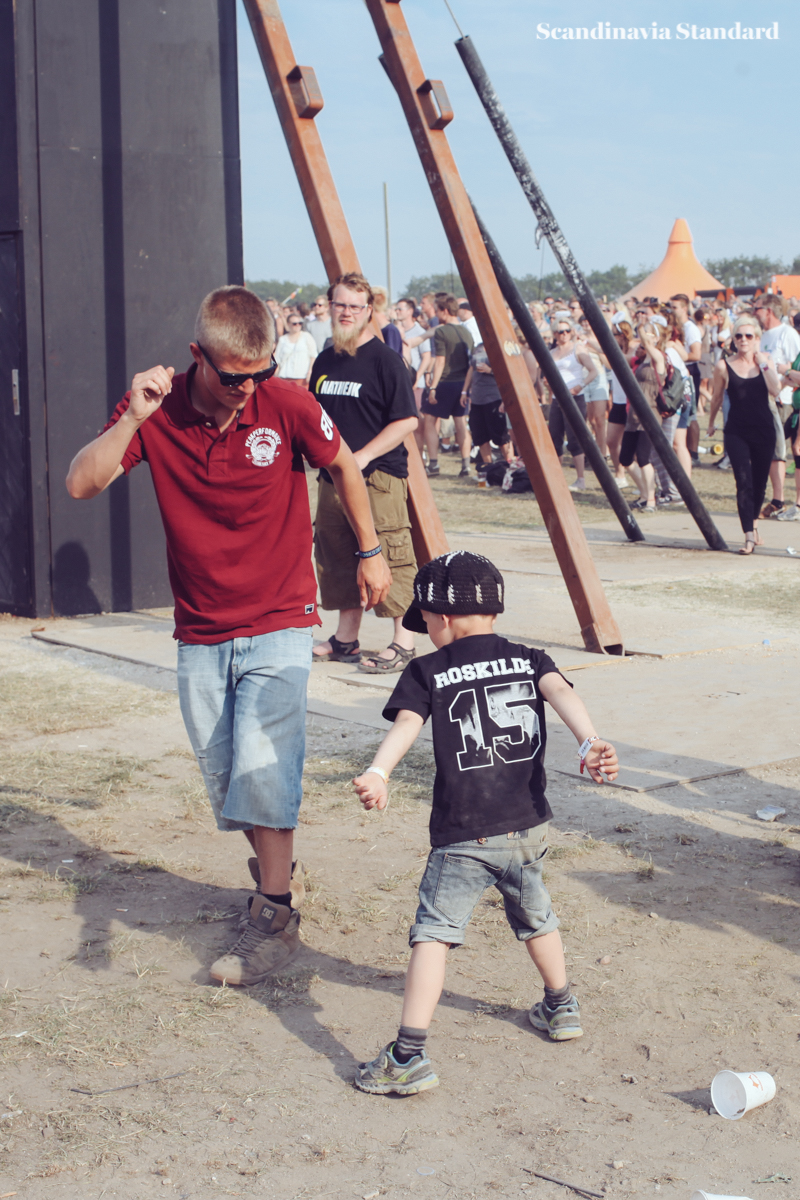 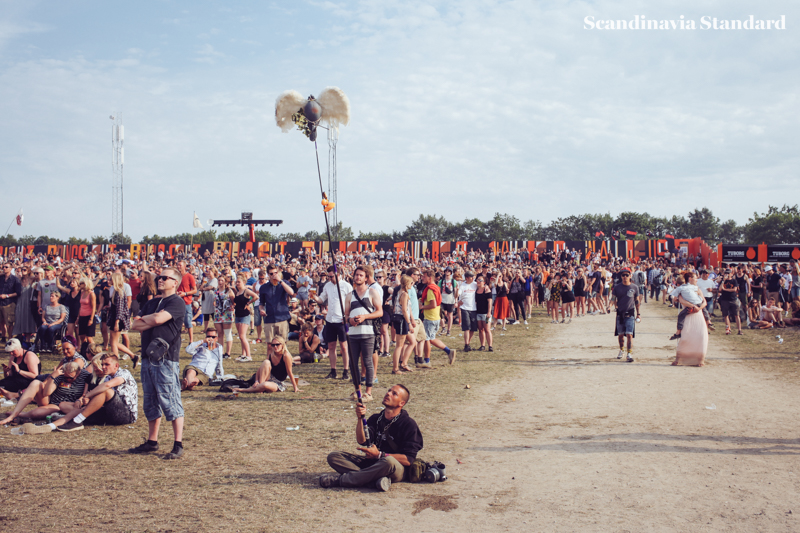 Have rockin’ dreams with our Roskilde Playlist.