Near the shore of Mjøsa, Norway’s largest lake, stands the world’s tallest wooden building amidst a region more known for farms and forests than high rises.

The 85.4-meter (280-foot) tall Mjøstårnet (Mjøsa Tower) is located in Brumunddal, a town with a population of about 10,000, along the E6 highway linking Oslo with Lillehammer. The skyscraper’s wooden facade can be seen for miles around, but what makes it unique is what’s inside.

Mjøstårnet’s primary load bearing structure consists entirely of timber, but not the lumber used in log cabins and conventional wood frame houses. Instead, it uses “engineered wood,” a refined product of which the two main variants are cross-laminated timber, abbreviated CLT, and glued laminated timber, which is sometimes called GLT but more commonly known as glulam.

Think of CLT as plywood on steroids. Layers of kiln-dried wood are pressed together with adhesives, with the grain of adjoining pieces at perpendicular angles, creating structural panel walls and flooring. In contrast, glulam consists of several layers of wood with grains running parallel glued together to form columns and beams.

Both CLT and glulam compare favorably to steel and concrete in terms of their strength and fire resistance. In certain ways, engineered wood is superior to structural steel and concrete, in that it is much lighter and more conducive to modular construction. This allows for faster and safer building site conditions. And while beauty is in the eye of the beholder, wood is widely considered an attractive material that can connect the built and natural environments.

But, probably the biggest advantage of engineered wood is environmental. Steel and concrete building construction is a major source of greenhouse gas emissions, whereas tall timber buildings have a much smaller carbon footprint and can be carbon neutral or even carbon negative over the long term.

Trees absorb carbon dioxide (CO2) and as such a timber building, by preserving wood, keeps carbon out of the atmosphere that would be released if a tree decomposes.

For Mjøstårnet, the primary tower structure consists of a glulam frame with CLT used for secondary elements such as the elevator core and stairways. The adjoining low rise portion of the complex is a CLT structure.

The approximately 11,300-square-meter tower houses a wide mix of uses, most prominently the appropriately named Wood Hotel, with 72 rooms on floors eight to 11. Besides this, it also includes a ground floor restaurant, meeting rooms on the second level, offices on the third through seventh floors, 33 apartments spread across the upper six floors, plus an event venue on the 17th floor, and a terrace on the 18th. The adjoining low rise building is an aquatic center with two 25-meter swimming pools and saunas.

Although mass timber remains enigmatic to the general public, when Mjøstårnet opened in March 2019, it marked the latest pinnacle in a trend that has been gathering momentum over the course of this century.

This new way of building is known by a variety of terms including mass timber, tall timber, and plyscrapers. Although by no means limited to Scandianvia, the region has been at the forefront thanks to its abundant forests and commitment by key industry and government players.

In this case, property developer Arthur Buchardt wanted to create a transformative project for his hometown and reached out to Moelven Limtre, a locally based company (limtre is Norwegian for glulam), to help create an all timber high rise. The firm produced glulam elements for the building, mainly sourced from Norway Spruce trees harvested within a 50-kilometer radius. 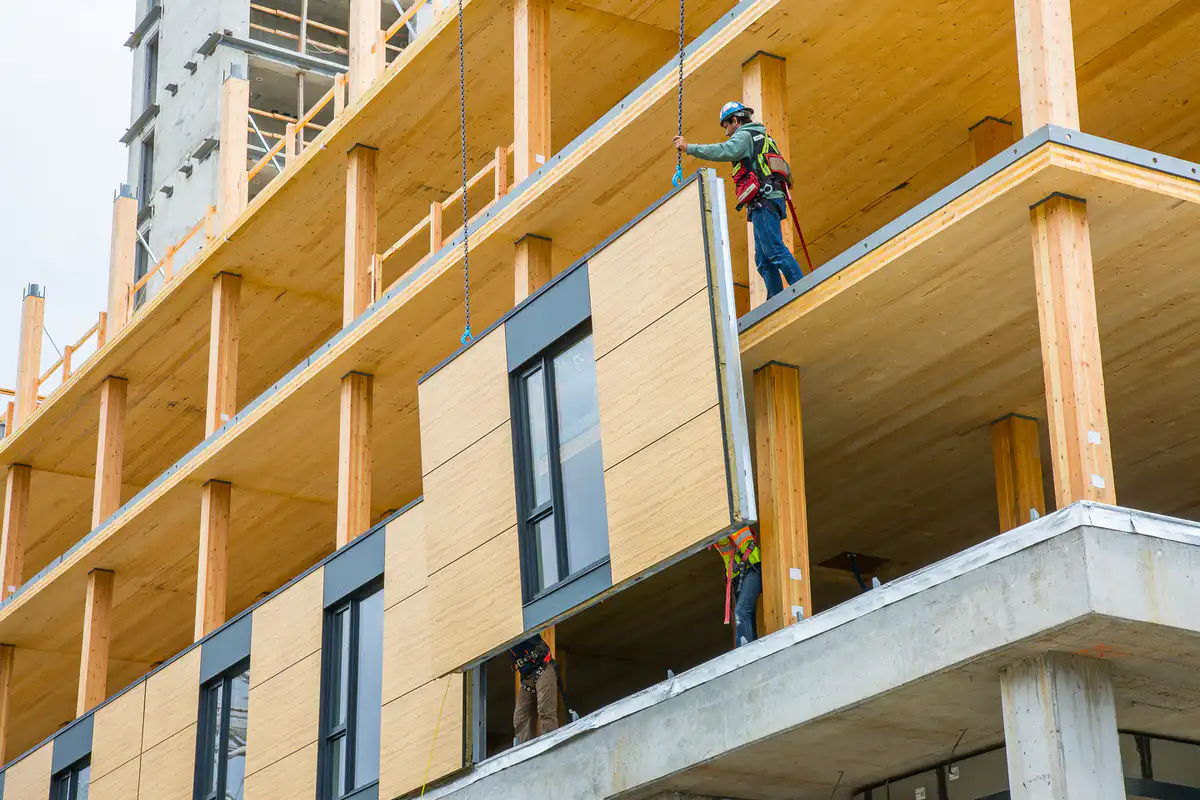 The structural system was based on one developed for other projects, such as the 49-meter (161-foot) tall Treet in Bergen, previously Norway’s tallest timber tower.

In reflecting on his client’s objectives, Moelven Limtre CEO Rune Abrahamsen wrote in 2017 that “his vision is that the project will be a symbol of the green shift, and a proof that tall buildings can be built using local resources, local suppliers and sustainable wooden materials.” In fact, If anyone doubted that Mjøstårnet represented a new model, another project soon demonstrated this was no fluke. 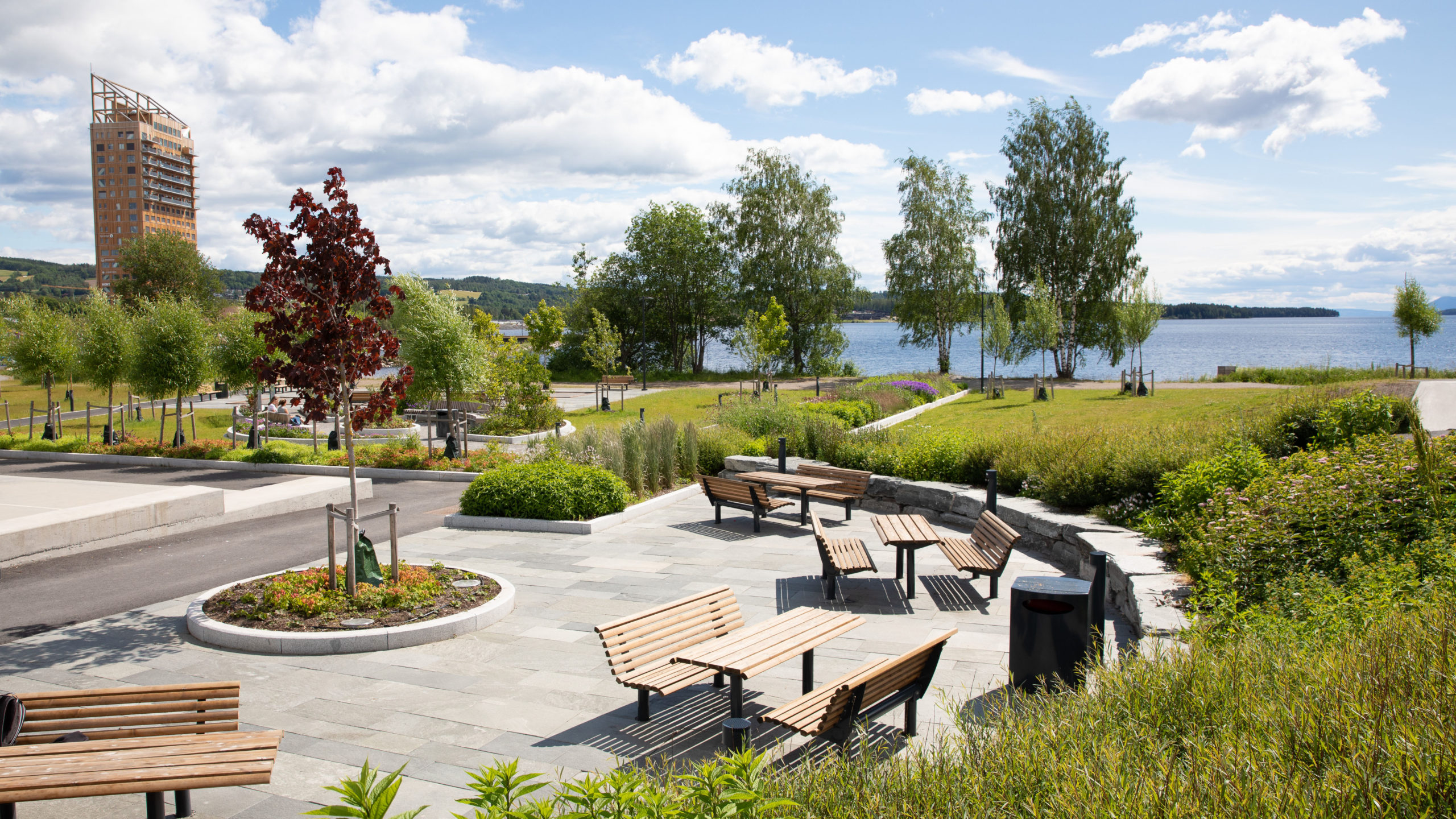 During the fall of 2018, as Mjøstårnet neared completion, in Sweden construction on another tall timber building began. The newer project, officially opened in September 2021, is called Sara Kulturhus. At 75 meters (246 feet), it is the world’s second tallest timber building leaving Mjøstårnet in the top spot for the moment (more on that later). 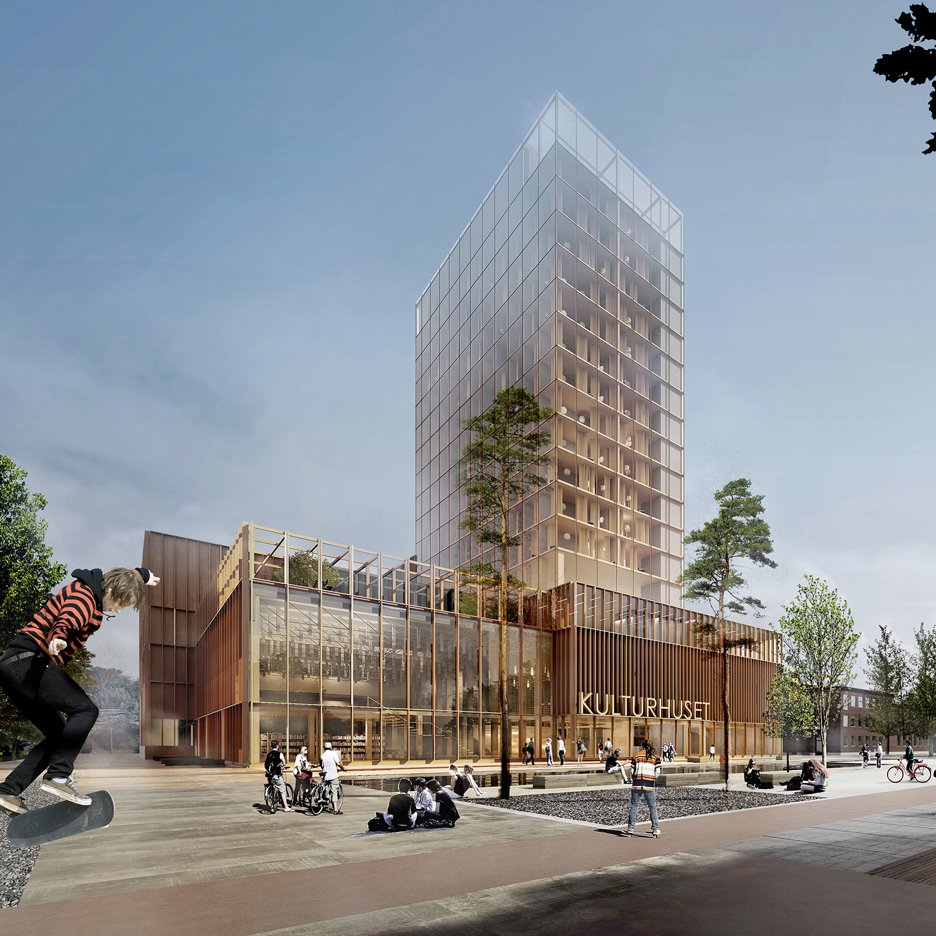 It is a mixed-use development in Skellefteå, a small city of approximately 35,000 residents considered the gateway to Swedish Lapland. It is intended to boost tourism and economic development, while being a model for sustainable building and a demonstration of the viability of mass timber. It consists of a horizontal base housing public facilities capped by a tower occupied by The Wood Hotel.

Yes, the two projects share more than a few similarities, though the two Wood Hotels are not affiliated and have different operators.

But, in other respects, Sara Kulturhus, which is named for prominent 20th century writer and local hero Sara Lidman, stands apart from its Norwegian predecessor.

At 30,000 square meters, it is considerably larger and its building base is filled with cultural facilities. These include a new City Library, two art museums, and six stages for concerts, plays, and other events. It also features a large public entry hall with a grand wooden staircase.

Timber is highly visible throughout, with many structural elements exposed, and is also used for ceilings, non-load bearing walls, acoustical panels, and part of the facade. However, a substantial portion of the building’s skin is double-layered glass, providing views of its public spaces and timber frame from surrounding streets and an adjoining public square.

The hotel’s 205 guest rooms are on the sixth through 18th floors and are topped by a restaurant and bar on the penultimate level and a spa with sauna and a pool on the top floor.

The Skellefteå municipal government sponsored the project and awarded the design commission to White Arkitekter through an international competition. The CLT and glulam were locally produced nearby from regional sustainable forests.

The Council on Tall Buildings and Urban Habitat (CTBUH) classifies Sara Kulturhus as a timber composite rather than an all-timber structure, because it uses steel and concrete elements to provide expansive column-free spaces for the arts spaces. But the tower relies on an entirely CLT primary structure and as such it is closer to Mjøstårnet than other hybrids such as Brock Commons in Vancouver, a 53-meter (174-foot) timber building that includes a concrete structural core.

Due to the aforementioned lightness of timber structures compared to steel and concrete, concrete slab floors were used on the upper levels of Sara Kulturhus, adding extra weight to minimize sway from winds, a stabilizing measure also used in Mjøstårnet. This is not considered a primary structural element as it is done for comfort purposes rather than structural integrity.

The History of Tall Timber Architecture

Although engineered wood is newly prominent, it is no new kid on the block. German carpenter Otto Hetzer patented gluam in 1906 and the technology arrived in Scandinavia in 1918 with the opening of a factory in Norway licensed to use his system. Another manufacturing facility opened in 1919 in Töreboda, Sweden, which continues to operate today and is now part of the Moelven Group, the parent firm of Moelven Limtre.

Although glulam was long a niche product compared to steel and concrete, notable historic uses in Scandinavia include railroad station arches starting with Malmö Central Station in 1923 and beams in Sigurd Lewerentz’s St. Mark’s Church (Markuskyrkan) of 1960.

CLT is a more recent product, having been developed in Austria, Germany, and Switzerland during the 1990s and soon after embraced in the Nordic countries. Today, Moelven, Metsä Wood, and Stora Enso are leading international producers of wood-based structural materials.

To be sure, tall timber did not start with glulam. For example, the 26-meter (85-foot) tall stave church in Heddal, Norway dating from the 13th century has long proven the viability of all-timber structures in Scandinavia. Further afield, China’s 67-meter (220-foot) tall Sakyamuni Pagoda of Fogong Temple has survived earthquakes and wars since its construction in 1056.

Above: Heddal Stave Church near Notodden in Norway; © Adobe Stock

The Future of Timber Architecture

Advocates argue that the 21st century must and will be the age of mass timber. If they are right, then at this moment the future can be seen not in Dubai or Shanghai or even Copenhagen or Stockholm, but in the small cities of Brumunddall and Skelefteå.

Harald Liven of Moelven Limtre said in 2019, “Mjøstårnet may be the world’s tallest wooden tower, but we hope not to hold the record for long.” Although Sara Kulturhus did not take the title, Ascent Milwaukee in the United States, a new 86.6-meter timber-hybrid building, is expected to be completed in summer 2022. Numerous other even taller timber buildings throughout the world are in various planning stages.

While Mjøstårnet and Sara Kulturhus and other tall timber buildings set height standards for others to meet and exceed across the world, in Scandinavia, where there are established supply chains and professional expertise, their importance may lie more in establishing timber structure buildings as the new normal.

If 18-storey buildings can have all timber structures, why shouldn’t most buildings of that height or shorter, which constitute virtually all Scandi buildings, follow suit?